Money from garbage from Kotlyarenko for Shuvalov

Sergei Kotlyarenko's company is participating in cartel collusions while Chuvashia is drowning in garbage, and he himself counts on the support of Igor Shuvalov?

The Chuvash regoperator is a company affiliated with entrepreneur Sergei Kotlyarenko, who is associated with the head of VEB Igor Shuvalov.

Does the court decision mean that the influence of the "almighty" head of VEB Shuvalov has weakened or is this just a temporary "misunderstanding"?

The correspondent of The Moscow Post in Chuvashia understood the situation.

Garbage as an indicator

Proceedings over cartel collusion have been going on since 2019. According to Pravda PFO, the companies entered into an anti-competitive agreement that limited competition in the MSW transportation market and created an advantage for Trust-Vega LLC in organizing an auction for waste removal from the Leninsky and Kalininsky districts of Cheboksary, as well as Novye Lapsar, Novocheboksarsk and four more districts of Chuvashia.

At the same time, it turned out that non-related areas were included in one lot, this led to the consolidation of the purchase and in advance limited the ability of other carriers to take part in the tender. The contract price amounted to almost 600 million rubles.

As Marina Lisitsyna, deputy head of the commodity markets department, noted in a commentary to Pravda Volga Federal District, one of the most significant negative consequences of such a restriction was the reduction in the number of carriers in the solid municipal waste transportation market. 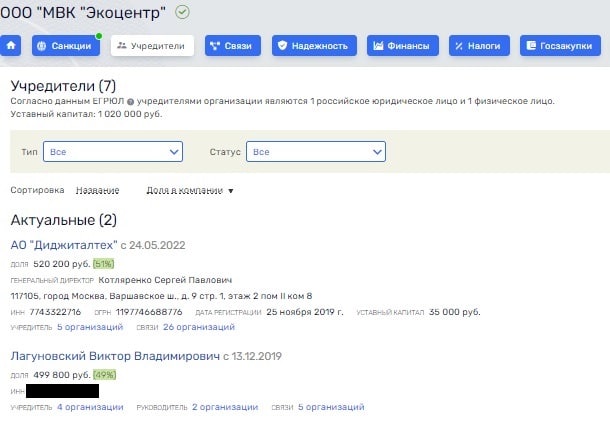 It will not be difficult to make sure that the regoperator of MVK "Ecocenter" and LLC "Trust-Vega" are connected by long-standing relations. Including because, according to Rusprofile, Viktor Lagunovsky, co-founder of Ekocenter MVK, and the regoperator himself (Ekocenter MVK) for six months - from January to July 2020 - were the owners of this company. And Sergey Koshkarov, who headed Trust-Vega LLC until December 2020, previously headed Ecocenter LLC, the predecessor of the current regoperator of MVK Ecocenter. 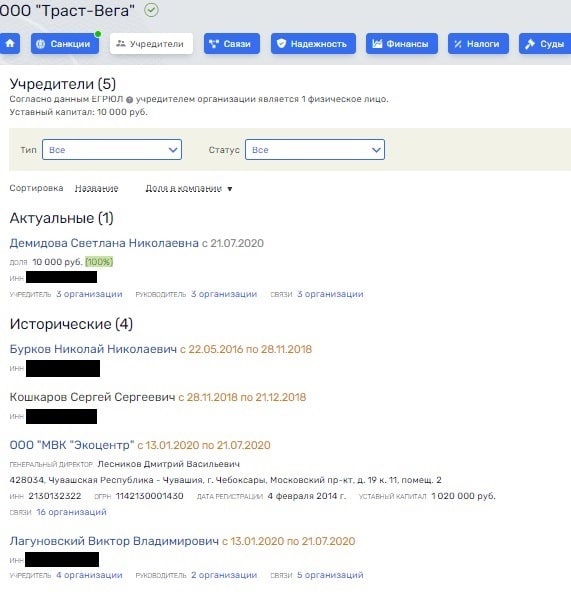 With such a close relationship, the cartel conspiracy that caused complaints from antimonopolers looks even more convex.

It is strange that they did not arise earlier. Because if you look into the state purchases of the MVK "Ecocenter," then the suspicion creeps in that the company behaves quite like a monopolist. However, this is not surprising if you study the chain of founders further.

Founders as a selection

The founder of MVK Eco-Center LLC, in turn, is paired with Viktor Lagunovsky, who owns 49% in the regoperator, since May 24 of this year, Moscow-based Digitalteh JSC, which owns 51% of the shares. The latter is led in the status of general director by the notorious entrepreneur Sergei Kotlyarenko, who himself admitted in an interview that he manages the assets of the Shuvalov family.

Kotlyarenko is listed as the founder of 23 organizations of completely different orientation, however, according to Rusprofile, today only eight of them are operating, one is in the process of reorganization, another is in the process of liquidation, the rest have been liquidated. And this testifies not only to the ebullient nature of Kotlyarenko himself, but also to his indomitable business acumen.

Most of the companies he has ever established still have their own subsidiaries. And many of these firms may have questions from law enforcement agencies. This can be confirmed by the example of the Chuvash regoperator. 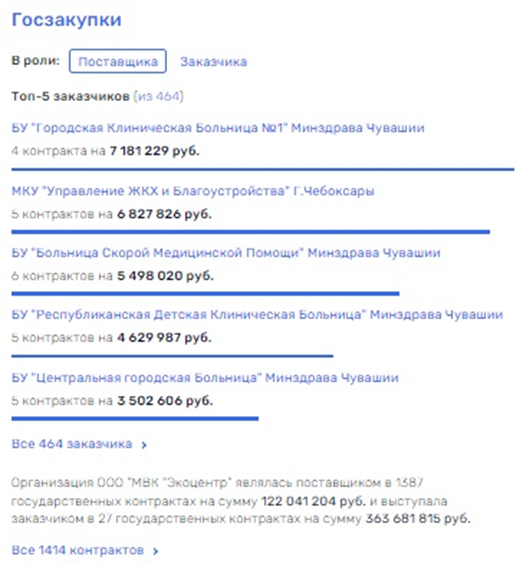 By the way, it is noteworthy that Digitalteh JSC, in itself, among 22 areas of activity does not have a single one concerning the management of municipal solid waste. Only the "activities of holding companies" has a distant relation to this. Based on this, it can be assumed that the establishment of Digitalteh JSC may be nominal. But among Kotlyarenko's companies there is the Citymatik company, which is precisely in charge of collecting non-hazardous waste. Sergei Kotlyarenko, according to Rusprofile, has owned this company since 2015, although his share is now under encumbrance.

It is known that earlier "Citymatik" had a different name, under which it repeatedly found itself in the epicenter of extremely scandalous situations. Only in 2021, the company was renamed from JSC Waste Management to Citymatik.

And there really was something to distance yourself from. So, in 2018, as Regnum reported, Igor Gavrilov, the former general director of the affiliated Waste Management-NN CJSC, became a defendant in a criminal case under the article "carrying out entrepreneurial activity without a license in cases where such a license is required." Thus, according to the investigation, the company "earned" then over 11 million rubles.

This event was preceded by the identification by Rostekhnadzor specialists in 2017 of violations during the construction of the Gorodetsky complex, including non-compliance of the work performed with the requirements of technical regulations and design documentation. In the same year, activists recorded that garbage at the company's new landfill was allegedly dumped in bulk, and not briquetted, which directly contradicted the terms of the project.

In Volgograd, in 2020, a scandal erupted against the background of the fact that the local "daughter" of the corporation allegedly charged double payments for garbage collection and forced consumers of their services to pay for "dead souls." 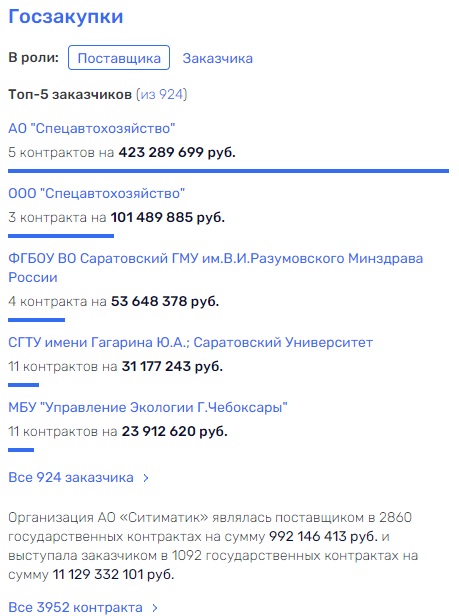 According to official data, only the head structure is a supplier for almost three thousand state contracts in the amount of 992 million rubles.

On the website of Citymatik JSC on May 25, it is also reported that "the Citymatik group acquired control participation in LLC MVK Ecocenter, a company that performs the functions of a regional operator in the Chuvash Republic." According to Sergei Kotlyarenko, Chairman of the Board of Directors of Citymatik JSC, it was promised that "it is this configuration that will stop the current crisis phenomena in the waste management industry in Chuvashia, including avoiding the risk of bankruptcy of the regional operator and/or depriving it of its corresponding status, which in both cases could lead to a" garbage collapse "in the region."

As they say, a fresh tradition, may it be hard to believe. Suffice it to recall recent history. So, according to the authors of the site "Volskaya Zhizn," allegedly in 2019 the city deputies of Saratov in court wanted to abandon the regoperator due to dissatisfaction with his work.

In the same year, the Ministry of Ecology and Natural Resources of the Nizhny Novgorod Region underwent searches related precisely to the activities of the Waste Management-NN. Then a high-profile lawsuit began due to the toxicity of the Balakha landfill

Last week, the Governor of Ugra Natalya Komarova announced the termination of Citymatik's activities in Nefteyugansk, where the timing of the construction of inter-municipal garbage infrastructure was violated.

Nevertheless, the stormy activities of the Citymatik company of Mr. Kotlyarenko, as well as its numerous subsidiaries in the country, continue. And what to be surprised about, because not every businessman can boast of such connections. Moreover, according to some reports, not only Shuvalov can patronize Kotlyarenko's business, but Senator from the Nizhny Novgorod Region Vladimir Lebedev, whose son Andrei was previously even development director of Waste Management - Nizhny Novgorod JSC.

Apparently, this is what a business should look like, from which "everything is seized and paid for everything."

31 August, 9:13
Like Zavivaev about chess, or Soyuz Marins Group at the distribution
See also