While Uralkali and Uralchem are failing on all indicators, could Dmitry Mazepin think about a political career in a neighboring state?

Dmitry Mazepin, the owner of Uralchem and the key shareholder of Uralkali, announced plans to completely restructure the management of his assets in 2021, creating a common management company for them. This is reported by The Moscow Post.

Such a step may be a preparation for Dmitry Mazepin's actual departure from direct management of structures. And there is a serious logic here. Looking ahead, according to our sources, Dmitry Mazepin is seen as a compromise figure for the post of Prime Minister of the Republic of Belarus in case of a power transit in this country.

Yes, exactly to Belarus, where the second most important player in the global potash market after Uralkali, Belaruskali, works under the supervision of Alexander Lukashenko. The Head of Belarus himself has long been under sanctions, along with his eldest son and a number of government officials. The last ones were accepted on November 6, as RIA Novosti reported. It's no secret that Belarus is not a foreign country for him because of the common potash fertilizer market. He has been there many times and has long been probing the ground for the sympathy of Belarusians, including in the wake of protests against Lukashenko.

Not so long ago, Mazepin said that he agreed to help Belarusian students who were expelled for their opposition activities. In August, he also made a proposal to create National Salvation Committee of Belarus.

The "Saviour" from the Perm region is unlikely to make such statements in the context of Russian-Belarusian allied relations without approval.

In this regard, Mazepin can be "brought" to Belarus, as an official who is not covered up and has not compromised himself there. At the same time, Lukashenko will not be able to stop this option, because it can be made a condition of security guarantees for him personally. He has already become more cooperative on integration issues due to Western pressure. Russia's $1.5 billion tranche of economic aid also played its role.

For Mazepin, such an exit can mean a completely new page in his life and career. He seemes to be tired of the old one. Uralkali and Uralchem are drowning in a huge pile of problems and debts. Mazepin's empire is falling apart. In addition, he is ignored almost by everyone. He really wanted to buy a formula 1 Force India team for his son, but it was sold to Сanadian businessman Lawrence Stroll as if in defiance of Mazepin.

After arbitration managers of the team made this decision, Mazepin has filed a lawsuit in court. After all, he offered more money than Stroll (120 million euros against 101), but Stroll's bid was accepted because it was allegedly more related to the help than to the takeover. Thus, the Russian potash oligarch was simply "turned around".

"Takeover" is clearly not the last word in Dmitry Mazepin's vocabulary. For many years, the situation has been unfolding around the Togliattiazot plant (ToAZ), which Mazepin ardently wants to include in his empire. In 2008, Mazepin became the owner of 10% of the company, and since then there has been an acute corporate conflict.

According to rumours, it was Mazepin who could help initiate a criminal case against the former majority owner of ToAZ Vladimir Makhlai and his son Alexey. The latter headed the company's Board of Directors, but eventually lost his position. Makhlai was eventually sentenced in absentia to 9.5 years in prison for selling the plant's products at an undervalued price. This was reported by TASS.

It was Uralchem, as a shareholder of ToAZ, that filed the application that formed the basis of the criminal case. But the corporate conflict at ToAZ is being continued, and recently documents of foreign lawyers who were engaged in this case got into the network. Interesting conclusions can be drawn from them.

Much later, documents of foreign lawyers who were engaged in this case came to the web, from which we can draw extremely interesting conclusions. Allegedly, they haven’t had illusions about the nature of the conflict for a long time.

In particular, it says that the judge of the Chief Magistrate of England and Wales, when considering the request of the Russian Federation to the United Kingdom for the extradition of Mr. Korolev (ex-CEO of Togliattiazot, who was prosecuted in Russia - editor's note), described Mazepin as a "corporate raider" who wanted to absorb ToAZ.

Korolev's extradition itself, as you might guess, was refused. Meanwhile, the judge allegedly described the trial of Uralchem against ToAZ as "a lie from beginning to end". And this is not all the epithets and phrases that are used in correspondence in relation to Dmitry Mazepin, Uralchem and the whole situation around ToAZ. 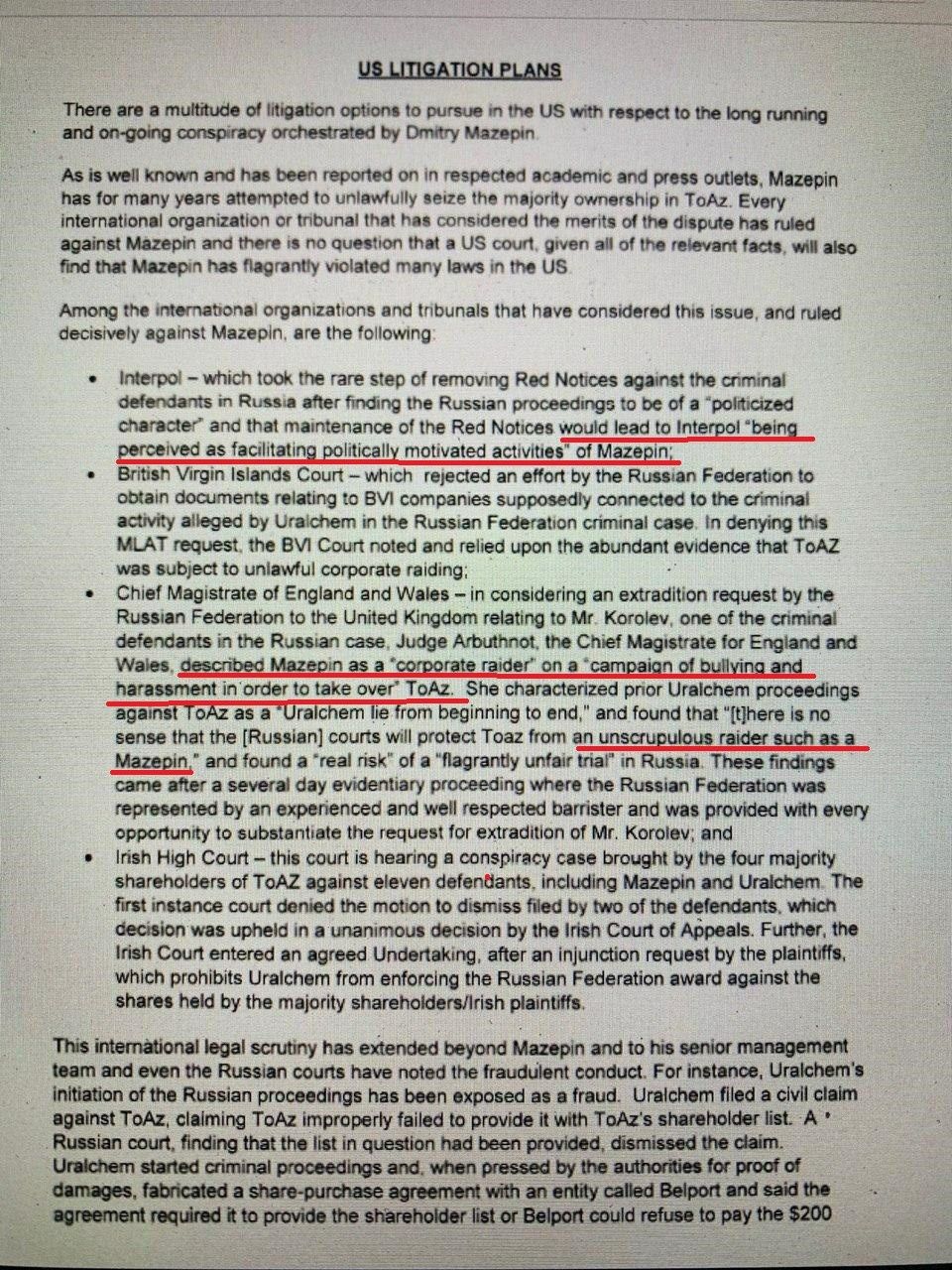 In parallel, Mazepin may want the bankruptcy of those competing companies that he could not reach in the past. It is, for example, about the largest Russian producer of methanol, Samara TOMET LLC, which is in a pre-bankruptcy state. The Moscow Post recently wrote about this situation.

Uralkali "fails" together with Berezniki?

However, more important than all these perturbations for Mazepin, of course, is the situation in Uralkali and Uralchem themselves. Everything is so bad there. Both companies of their subsidiary are literally mired in debt.

From 2013 to 2018, they received 537 billion rubles of loans, but where did this money go? It seems that it is more likely it went to gain control over Uralkali and other enterprises, but not in real investment in production and the Russian economy.

According to RAS reports at the end of 2018, the debt of Uralchem and Uralkali on borrowed funds should be about 691 billion rubles. At the same time, Uralchem's investments in fixed assets for 6 years, from 2013 to 2018, amounted to 16 billion rubles, which is simply an insignificant amount compared to the growth in the balance of borrowed funds. The latter could amount to 252 billion rubles for the same period.

Moreover, in the annual report of Uralkali for 2018, it is written in black and white that the volume of production has only decreased over these years - by 5%. In 2018, it was 11.5 million tons compared to 12.1 million tons in 2014. You can view the report here.

In such situation, there is no time to take care of the development of the enterprise. Not to mention compensation for those residents of Berezniki (Uralkali's base city) who lost their homes due to a technogenic disaster - sinkholes. Huge holes in the ground made by Uralkali's workings are devouring the city, but Mazepin is in no hurry to compensate for the damage at his own expense.

People are resettled at the expense of the budget - on the right bank of the Kama river in Berezniki, the Lyubimov microdistrict is being built, which still cannot be completed. Apparently, having decided to leave for Belarus, Mazepin can bring people close to him to the budget flows of this construction. 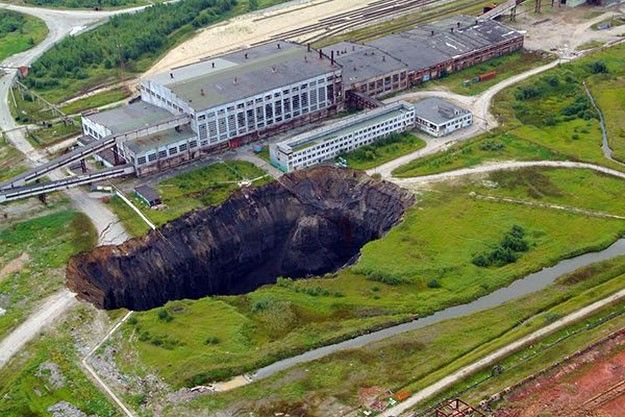 Sinkholes in Berezniki - a reason to bring close people to budget flows?

According to Interfax, Alexander Prygunkov, Vice-President of the PIK development group, may become the new CEO of the united management company Uralkali and Uralchem. This is hardly good news for Berezniki residents who are waiting for their homes.

PIK and its owner Sergey Gordeev have a very controversial reputation. Perhaps the whole idea is just in the development of budget money for the relocation of people.

But if the version with the "Premiership" of Mazepin is correct, then why not assume that Sergey Gordeev can join the shareholders of Uralchem.

Mazepin himself will be far away at this time: all operational troubles can be thrown off to the new management, which will be lured by state contracts for the construction of buildings and infrastructure. If Mazepin can't save his own company and improve people's lives on the spot, what can he do on Belarusian land?

21 December, 8:15
Integration against the background of external threat