Maina and Virta of God Nisanov

Can an independent financial system not controlled by the state exist in the markets controlled by God Nisanov? How do the security officials view this, and what damage can such an approach do to the budget?

As the correspondent of The Moscow Post reports , the market continues to discuss the possible purchase of Krasnaya Presnya by the structures of the odious developer God Nisanov.

The latter is known not only for scandals in its markets "Food City", "Gardener" and "Moskva", but also for rumors of alleged raider seizures of enterprises and organizations from his side.

Despite the fact that no real evidence of this was ever presented, not so long ago the most famous opponent of God Nisanov , formerly a successful developer and owner of SDI Group, Ilgar Hajiyev, said that people from Nisanov's team may be involved in the seizure of his business. The Moscow Post previously reported this story .

The scandal erupted in such a way that tons of dirt from the pages of the media poured out on Hajiyev. The campaign was clearly customized. Meanwhile, the story is so blatant that people still talk about it. 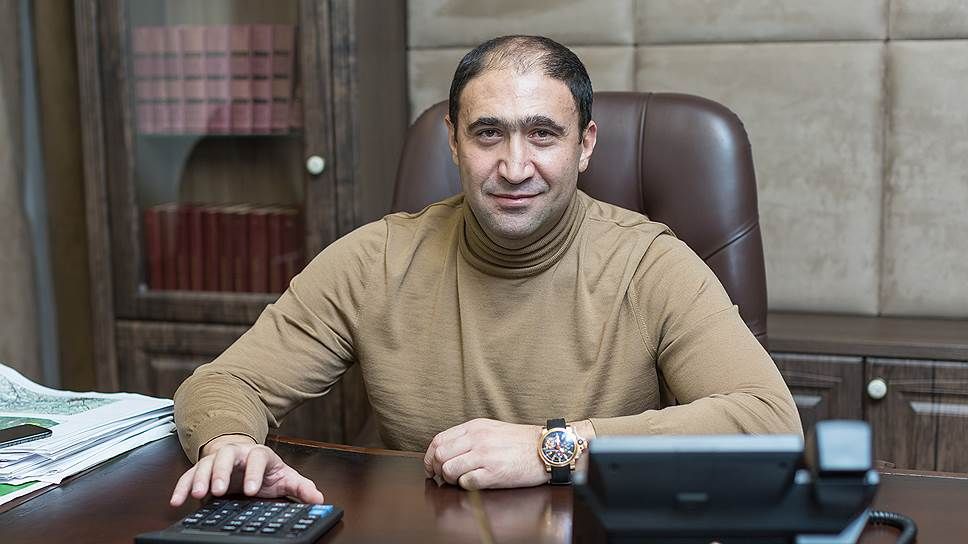 According to the authors of the site "Hakkin.az" , referring to the words of Hajiyiev himself, the alleged illegal circulation of cash and smuggling, which are found in the largest markets of the capital, lead to the loss of the Russian treasury up to $ 42 billion a year. Among such markets, with a high degree of probability, there may be Sadovod, Food City, and Stolichny, owned by the Kievskaya Ploshchad Group of God Nisanov.

If this is true, then the losses to the economy due to the shortfall in tax revenues may be comparable to the effect of Western sanctions. Can Nisanov cause damage to the country comparable to the actions of foreign ill-wishers? There is no evidence for this. And yet, given the reputation of the owner of Kievskaya Square, many people believe in this even without any documentary evidence.

At the same time, official revenues from Sadvod, Food City and Stolichny may amount to about 120 billion a year - an amount equal to about 3 trillion rubles. These are 26 annual budgets of the Khabarovsk Territory. For example, budget expenditures on social policy in 2020 amounted to about 5 trillion rubles. That is, the profits from Nisanov's markets are colossal.

Mine while it's hot

Why can a shadow economy flourish in Nisanov's markets? Experts believe that several circumstances may lead to this at once. First of all, there is a huge number of migrants who work for Sadovod, Food City and Stolichny. Many of them may work illegally. Accordingly, do not pay taxes.

Further, this is the use of digital currencies in the "laundering" process. According to the authors of the site "Ze Bell" , allegedly earlier there was information that several mining farms could be found on the "Gardener" market. There are also absolutely incredible rumors: as if only cash is honored at Nisanov's sites, which are then taken out of there almost by KAMAZ.

Why do you need cash? The essence is simple - they can buy cryptocurrency on it, "feeding" it to exchangers on the Internet through payment terminals. And then the funds received in the crypt are used to purchase goods in Asia and subsequent smuggling to Russia. The Bank of Russia simply does not "see" such transactions. 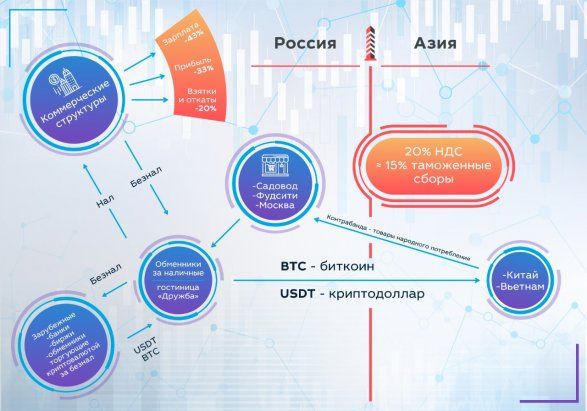 The scheme according to which the markets of God Nisanov can work, as presented by the authors of the site "Hakkin.az" .

Rumor has it that exchangers can be located right in the markets of Nisanov, as well as in the nearby Druzhba hotel, where many employees of these sites live.

As far as smuggling is concerned, there is good reason to believe that many such dealers at customs can deliberately underestimate the volume and value of goods using fake waybills. To say for sure - you need to catch the hand. Of course, no one caught the hand of those close to Nisanov. But the developer has such strong connections that we can assume otherwise. Unfortunately, the customs authorities of our country often become participants in illegal schemes themselves.

According to the authors of the site "Hakkin.az", presenting this as the opinion of Ilgar Hajiyev, supposedly after such customs, the contraband goods end up on the counters of the same markets from which they received money for their purchase. That is, the circle is closed. And the profitability of such a tax-free business can reach 300%.

At the same time, site owners, chain leaders, etc. can get from 10% to 20% of such income. It is believed that the owners of sites where money is sold and goods are sold can get from 1% to 2% of the total turnover of the shadow economy, and this is about $ 120-240 million

Of course, such actions cause enormous damage to the "white" Russian market, especially the textile one. The only plus is that many of these "cashiers", whom people like Nisanov can cover, spend a significant part of their funds in Russia. But this is where the positive ends.

But the Asian markets are very happy, from where the so-called goods are shipped to Food City, Moscow, Sadovod and many others. consumer goods.

"Food City" of  God Nisanov - a state within a state?

Another important point is the closeness of such markets from the institutions of the Russian state and law. In fairness, it cannot be said that the Nisanov markets are a closed area for the same law enforcement agencies. As Versiya wrote , in March 2019, security officials visited the Sadovod, Food City and Moscow of the odious developer with checks. And not just security officials from the Ministry of Internal Affairs, but also representatives of the FSB.

The special operation also took place in a nearby hotel where the sellers live. The police were looking for those who worked illegally or are on the wanted list. Rumor has it that there were plenty of leads on Nisanov's organizations in this regard. But tips by tips are a completely different matter - real crimes. As a result, only 19 citizens were brought to justice. The truth is only for the administrative one.

But this is only the official version. It is highly likely that crypto farms and payment terminals were searched in the Nisanov markets. Even so, and even if something was found, it did not become public.

Meanwhile, settlements for such operations could amount to 600 billion rubles a month. It is clear that the FSB should have dealt with this topic. And all the "fuss", we recall, took place just a few weeks before Ilgar Hajiyev lost his business. Perhaps Nisanov wanted to redirect public attention in a different direction. Is that why the case of Ilgar Hajiyev appeared later?

Needless to say, the void in the treasury left by such entrepreneurs and their trading "tumors" is being closed at the expense of the Russian budget? But businessmen like Nisanov do not seem to be bothered by this. Flies separately, cutlets separately. And we are the taxpayers who pay for this holiday of life. Which in these markets can easily also "hang".