Is entrepreneur Michel Litvak "pushed" in the construction project of the dry cargo area of Taman by influential people from the highest echelons of power?

As it became known to the correspondent of The Moscow Post, the Government is ready to exclude the new dry cargo area of the Taman seaport from the comprehensive infrastructure modernization plan (CIMP). Against the background of falling coal prices, the project has become of no interest to key cargo owners - SUEK and Kuzbassrazrezugl.

The dry cargo area is likely to be taken over by OTEKO of Michel Litvak. The businessman "squeezed out" competitors from the object, left them "holding bag" and will collect all the "cream", won't he?

The project can be excluded from the CIMP  without a refund of the funds spent - it is unclear who will compensate for the costs of design and adjustments. Meanwhile, in 2016, 1.8 billion rubles were allocated from the Russian budget only for design. And then the project was changed more than once, research was carried out - of course, not for free. The final cost of the project is estimated at 183 billion rubles.

And all this "wealth" can go to a businessman of Belgian origin, Michel Litvak. Actually, the businessman is still "operating" in Taman - his OTEKO has its own dry cargo terminal there.

He has repeatedly "encroached" on the main state project: in particular, in 2018, the Ministry of Economic Development  proposed to transfer two land plots in the dry cargo area with a total area of 1 million square metres to OTEKO. Even then, the Ministry noted that construction on the disputed territories was not being conducted due to the lack of budget and private funds. Does it mean that Litvak's company has been waited for in this Taman project for years?

And while the businessman is working in Taman with his current capacity, money, including state money, "flows" into his pocket,. Recently, the Ministry of Energy announced its intention to request state support for the OTEKO terminal in the amount of 10 billion rubles per year. The fact is that India plans to buy almost all of Russia's coking coal and anthracite exported - we are talking about volumes of up to 40 million tons of raw materials per year at a cost of about 4.5 billion dollars. In order to provide a large purchaser (and now Russia only offers 46 million tons for export) with a favorable price, it is necessary to reduce the cost of coal transshipment. In fact, the state subsidy of Michel Litvak's OTEKO project in Taman is intended to reduce this cost from 14 to 8 dollars per ton.

At the same time, as Kommersant reports, this approach is considered discriminatory in the industry, and the FAS also doubts its validity. But, as they say, "the law does not apply" to Litvak, does it?

The businessman obviously has powerful "aquaintances" in state structures. For example, he actually built his terminal in Taman at the state expense, taking a loan from VTB. As RBC wrote, the financial organization opened a credit line in 2018, the project cost is $2 billion. And the total amount of planned investments in the port-industrial park reaches $8 billion.

Incredible luck of a foreigner in Russia

May such unprecedented favour of the state be explained by the fact that they are trying to "please" a new-born citizen of the Russian Federation? But Mr. Litvak received the coveted passport with a maroon cover only in April 2019. At the same time, not in the usual way, but by personal decree of the President himself, as TASS reported.

Litvak has been working on the Russian market since 1991. As the Yuga.ru wrote, at first the Russkiy Mir company, founded by him, was selling Chinese "junk", but a year later suddenly began trading fuel oil from the Omsk refinery. And soon his office together with SFAT exported up to 95% of oil from the Tengiz field in Kazakhstan. Nice growing, isn't it?

At the beginning of the 2000s, Litvak acquired 70% of the railway carrier SFAT and merged its firms under one management company OTEKO. According to experts, then the holding company began to control a fifth of all export railway transportation of petroleum products. In 2004, Russkiy Mir became the largest private carrier of oil cargo by rail in the entire country.

And here it is worth mentioning that at the same time SFAT was owned by Vitaly Yuzhilin, who later built a good career for himself. Thus, he was elected three times to the post of Deputy of the State Duma, and also built a good business in St. Petersburg, which made him a millionaire, Forbes reported.

It is noteworthy that each time he was elected to the State Duma from different parties - the Communist party, Rodina, United Russia. Such political castling allowed him to develop connections in various circles. It is rumored that current Head of Roscosmos Dmitry Rogozin, may be his patron - in 2003, when Yuzhilin got to the state Duma from Rodina, Rogozin was sitting in the leadership. Moreover, later Yuzhilin was a member of the Government Marine Board of the Russian Federation, at that time also headed by the current head of Russian cosmonautics.

There are rumors that Yuzhilin is also close to Chairman of the Federation Council Valentina Matvienko. It was during her governorship in St. Petersburg that he spread activity in the Northern capital.

In other words, Litvak almost from the very beginning of his activity in Russia got "correct" acquaintances. So, he decided to take a swing at Taman in the middle of the 2000s. In order to focus on this mega-project, he even said goodbye to his railway business of the Neftetransservice company, owned by Vyacheslav Aminov, Vadim Aminov and Alexey Lichtenfeld.

By the way, as The Guardian wrote, Aminov later was highlighted in the so-called "Panamanian archive" as the owner of an offshore company in the British Virgin Islands. Does it mean that Litvak has "aquaintances" not only where he can take money, but where it can be "funnelled" as well?

Meanwhile, he obviously made a lot of money on Taman Harbor. As Dokumenty i Fakty wrote, 40 billion rubles of budget money was spent annually on the construction of the facility. It was also planned to build a 36 km long railway line and a highway from Novorossiysk directly to the port at the state expense.

It is curious why does Michel Litvak has such a "luck" in Russian business? The answer may lie on the surface: he has influential acquaintances here, and also relatives, who are not ordinary people. Litvak is married to actress Svetlana Metkina, daughter of former State Duma Deputy Alexander Metkin. It is rumored that it was his father-in-law who lobbied for the construction of the OTEKO port. And then relatives began to "divide" the budgets allocated for this, didn't they?

Here it is interesting to look at the financial indicators of Litvak's assets. JSC OTEKO's profit is negative by as much as 122 million rubles! In addition, according to Russprofile, the company registered address of mass registration. In total, 100% of the company belongs to the Dutch firm Railvat B. V.

Another Litvak's office, Kapitalinvest LLC, can boast a profit of minus 12 million rubles. May it be because of only two employees registered? The company is co-founded by Cyprus-based Yverlon limited. 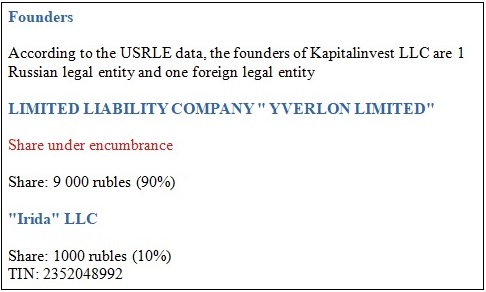 The attraction to everything foreign, apparently, passed on to Alexander Metkin. The entrepreneur is listed as the head of six companies, the founder - of four more. And most of these companies are somehow connected with their father's business - for example, Ramenskoye Logistics terminal LLC is a subsidiary of Kapitalinvest. Yverlon limited of the Netherlands is also listed as a co-founder. And financial indicators raise questions: where is the profit of minus 2.1 million from with revenue of 25 thousand rubles? Besides, there is only one employee working there…

Metkin's other companies also have a foreign footprint. Thus, Tamanneftegaz is 100% owned by the Dutch BELEGGINGSMAATSCHAPPIJ NES B. V., Oteko-Portservice LLC and Agroinvest LLC — by Cyprus Infrasis Group LTD. Does it mean that a family of merchants can "shove" money from government orders through their small network of offshore companies?

And the scandalous story with FC Kuban comes to mind: in 2016, Mr. Litvak became an investor in the team, and 75% of the stocks passed into his hands. And two years later, the club was declared bankrupt - in total, the lender wanted to recover as much as 1.5 billion rubles from it, Kommersant wrote. Later, the leaders of Kuban were suspected of fraud with a total loss of 40 million rubles, Yuga.ru wrote. But, as you know, dishonest businessmen often withdraw funds through their sports assets.

So, now Mr. Litvak will finally be able to snatch a really big slice from the Taman pie, won't he? But everything around him contributes to this - it seems that the state itself is interested in the fact that the entire multi-billion-dollar project went to his hands! It is curious which influential friends and patrons should be thanked for this?