Like Zavivaev about chess, or Soyuz Marins Group at the distribution

Perhaps businessmen close to the Podolsk organized criminal group from Soyuz Marins Group are expanding the empire by buying a business center in the estate of Andrei Vorobyov?

A few words about Zavivaev

Zavivaev is best known as the president of the Chess Federation of the Nizhny Novgorod Region. There are a lot of laudatory articles about him on the Internet, mainly resting on how much he loves chess, endless dedication to the cause.

But he has other passions. In 2015-2017, Zavivaev owned Grandstroy-99 LLC. The company was caught colluding in a bid last year. This was reported by Pravda Volga Federal District. FAS prevented the scam.

Together with the HOA Stroy company, which is owned by Anna Zavivaeva (judging by the name of a relative), they participated in a competition for the development of design estimates and the reconstruction of 5 administrative buildings in Nizhny Novgorod. The third participant was the company from Cheboksary "Stroyindustriya." As the FAS reported, "The contract went to HOA-Stroy." The court managed to find out that 250 thousand rubles were paid for the refusal of Stroyindustriya LLC to participate in the purchase "

Interestingly, for the detected crime, the official of Grandstroy-99 suffered administrative punishment, although in fact, an article of the criminal code on commercial bribery is usually used for such crimes.

In addition, Zavivaev was elected to the Zemsky Assembly of the Knyagininsky District of the Nizhny Novgorod Region at the age of 26, becoming the youngest deputy in the region. Where did such a deafening success come from? As the correspondent of The Moscow Post managed to find out, influential people from the Podolsk organized crime group can stand behind him.

The company "Hyde Breeze," which is in question, is listed as the founder of a certain Alexander Morozov. Morozov until 2021 was the general director of Investrietti, where the founder is Agricultural Agriculture and Zernozagotovka LLC (SKHz), which is owned by Soyuz Marins Group JSC (SMG).

There is also an offshore company, VEYDALE LIMITED, in the structure potentially affiliated with the Established Firms. In 2015-2016, Agricultural Agriculture and Zernozagotovka LLC (SKHzZ) was registered for it. This office is owned by Investrietti, its head at one time was the current founder of Light Breeze Alexei Morozov.

A huge number of enterprises are associated with Soyuz Marins Group, including those receiving government contracts. Another offshore company, ZEVERAY TRADING LIMITED, is also affiliated with it. Until 2017, Electronics Plus LLC was registered for it from the orbit of the SMG.

One of the owners of the offshore is Albert Serkisyan. On the official website of the SMG, he is called the chairman of the board of directors of the company. According to the authors of the Rucriminal.info website, he allegedly acted as an official for the leaders of the SMG. The name of Ilya Kazakov also sounds - allegedly he is negotiating in Moscow. However, shortly after this publication in the SMG, Kazakov was disowned, saying that they did not know this.

Among the holders of the offshore there is also a certain Olga Evgenievna Volkova. Businesswoman-full namesake of this lady with the Nizhny Novgorod TIN is the founder of a number of organizations. Including Electronics-NN LLC. She is held by Zheleznyakov Igor Valerievich. According to information from open sources, he is the president of the Electronics Group of Companies and in 2017 a company from its orbit won the competition for the best developer of the year together with the Hampton by Hilton Nizhny Novgorod Hotel, which received an award on the same day.

SMG positions itself primarily as a film studio. On the official website, they write to themselves as follows: "a Russian multidisciplinary company whose tasks are to strengthen the spiritual and patriotic foundations of the state, the socio-economic development of Russia. The main areas of activity are the film and entertainment industry, the spheres of family recreation and hospitality, as well as construction, agriculture, real estate management and others. "

It was founded by former Marine Alexander Kulikov and, according to Kommersant, "consider friendly relations and close cooperation with law enforcement agencies - the Russian Marines, special forces of the internal troops of the Ministry of Internal Affairs of the Russian Federation" Vityaz "and" Rus. "

According to journalists of the publication, the company had connections from the orbit of the SMG in the police, and in the tax police, and the bailiff service. She also enjoyed the support of the mayor of Nizhny Novgorod.

The authors of the Rosotkat website claimed that they were allegedly connected with people from the Chekhov and Podolsk organized crime groups.

And can Mr. Zavivaev, a successful chess player who thinks exclusively about the game, be associated with these structures?

On Zavivaev's personal page on the VKontakte social network, a certain Mergen Pakhomkin appears in the businessman's subscribers.

Pakhomkin may be a member of a family that was engaged in illegal cashing of money as part of an organized group from 2015 to 2018. About 3.3 billion rubles were withdrawn into shadow circulation when using one-day firms. This was reported by Versiya. And here in the case there is an extremely lenient sentence.

Interestingly, the firms associated with the Pakhomkin family are still working great. For example, the Agrofirm PIK Plus is registered on the same Mergen Pakhomkin. By the way, judging by the schedule of its revenue, money from there can be safely withdrawn. Isn't it in favor of Zavivaev? 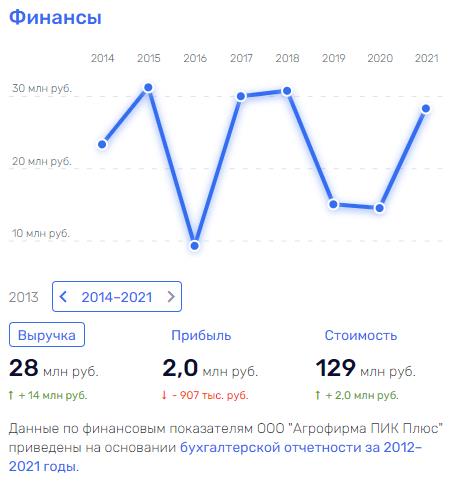 The company can be used as a "cube," where the funds of the "cashiers" go. Photo: https://www.rusprofile.ru

As you know, the former head of Kalmykia Kirsan Ilyumzhinov was seriously interested in chess. At the age of 14, he became the champion of Kalmykia. He, according to various sources, invested about $60 million in this industry.

Can it be assumed that such immunity Pakhomkina can be provided, among other things, by the former head of Kalmykia, if he is familiar with Zavivaev?

Connections "at the top"

Now SMG owns a lot of assets - this is the agricultural industry, hotels, and many others. Evil tongues connect the Podolskoye organized criminal group with a former employee of the authorities, the deputy mayor of the Moscow region, and now the head of the city of Podolsk, Dmitry Zharikov, who, with the coming to power, put a lot of people from Podolsk under him. By the way, Zharikov was personally appointed by Andrei Vorobyov, he also awarded Zharikov the Breakthrough of the Year medal and unexpectedly removed him from his post after a short time. Apparently, some problems of a legal nature arose.

At least there are rumors that allegedly after Zharikov came to power, he put his people, including two municipal enterprises - "Electricity" and "Heating Network" in order to lend them and bankrupt them, and withdraw the money. In addition, he could target Serpukhov - the same people began to receive contracts in this suburb. For example, the company of Alexander Lomakin "USSR." 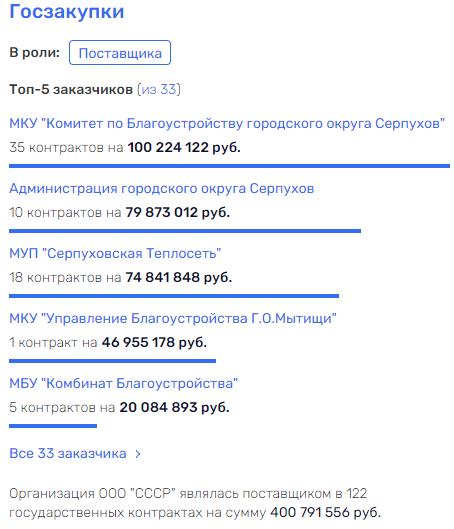 They say that she received such privileges thanks to Lomakin's friendship with the criminal authority Zub, who is friendly with representatives of the Podolsk organized criminal group. Photo: https://www.rusprofile.ru

Not so long ago, the Perspektiva company associated with Kulikov, twice as cheap as the starting price, acquired the Chaika pool in the center of Moscow. This was reported by Kommersant. Other companies that participated in the competition (in fact, one that belonged to the deputy, because another participant was associated with Perspective) did not mind. It seems that all bidders observed certain behind-the-scenes agreements.

Connections at the SMG can be traced up to Igor Shuvalov. Until 2018, the company was led by Profdir LLC. Since 2016, this control has been controlled by the asset manager of the Shuvalov family, Sergei Kotlyarenko.

In 2017, security officials came to the offices of the SMG with searches - the case concerned the investigation of land theft in the Chekhov and Podolsky districts of the Moscow region. This was reported by RIA Novosti. The case was not given. And the young ladies "earned" on potentially stolen lands could calmly settle in any of the above offshore companies.

In addition, the creator of the SMG, Alexander Kulikov (also, by the way, born in Nizhny Novgorod), is credited with his passion for Scientology, a religion banned in Russia. Moreover, as Kommersant wrote, employees of his companies were supposed to study at special courses the theory of Ron Hubbard, the founder of the Church of Scientology. Dissenters were fired.

For reference: for 21 years of work in Russia, the organization has become a defendant in dozens of high-profile trials.

"This is a special service that collects dossiers on all its adherents and shares information with the CIA," Alexander Dvorkin, professor of the Orthodox St. Tikhon Humanitarian University, quoted Vesti.Ru.

Thus, Mr. Zavivaev can be obliged to his position in the essence of the Podolsk organized criminal group, and in the interests of the SMG to acquire a large asset in the estate of Governor Vorobyov. And here it is worth remembering that the governor near Moscow can also potentially be associated with immigrants from the group. Is everything agreed at the highest level?