The revocation of the license of the SStB bank can only be the beginning of problems for its beneficiaries, who previously got into an international scandal with the purchase of residence permits in Latvia and many other stories with a corruption smell.

As the correspondent of The Moscow Post reports, the Central Bank has revoked the license of the Modern Business Standards bank (SStB). The regulator believes that the bank violated federal laws governing banking activities, as well as the requirements of anti-money laundering legislation. Over the past year, the organization has been repeatedly subjected to measures, including restrictions on attracting depositors' funds. In addition, the bank has violated the requirements of the legislation in the field of countering the legalization (laundering) of proceeds from crime and the financing of terrorism.

In other words, the bank has long been in the Central Bank's sights. The latter believes that the activities of the SStB bank were focused on providing settlements between individuals and illegal online casinos and bookmakers. This is a direct quote from the Central Bank's press-release.

In general, the ownership structure is complex and resembles a football team, where no one has more than 10%. In this case, any responsibility will have to be spread thinly across the entire team of beneficiaries. According to evil tongues, allegedly funds could be withdrawn from the bank - especially during the last year, when the restrictions of the Central Bank were already applied to it. 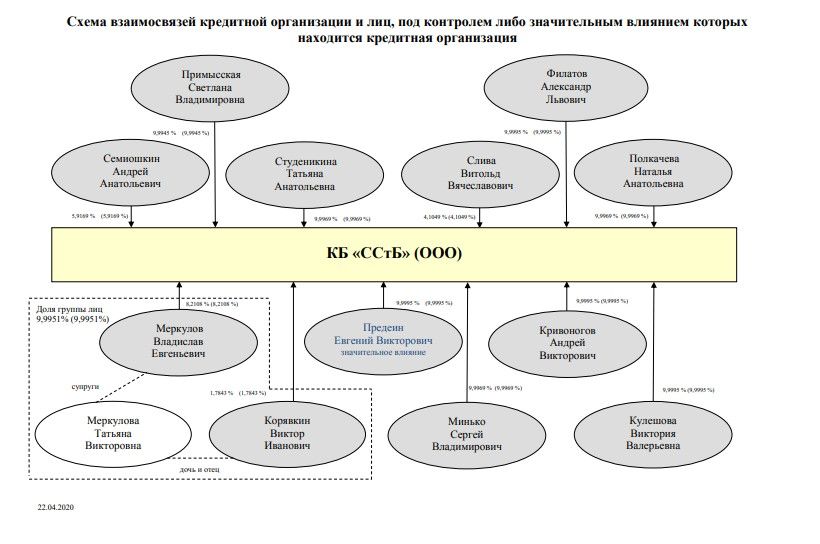 We have analyzed the bank's financial statements and recognize that this version has a right to exist. This means that questions to Predein and the Kuleshovs may arise not only from the Central Bank's auditors, but also from other, no less serious departments. 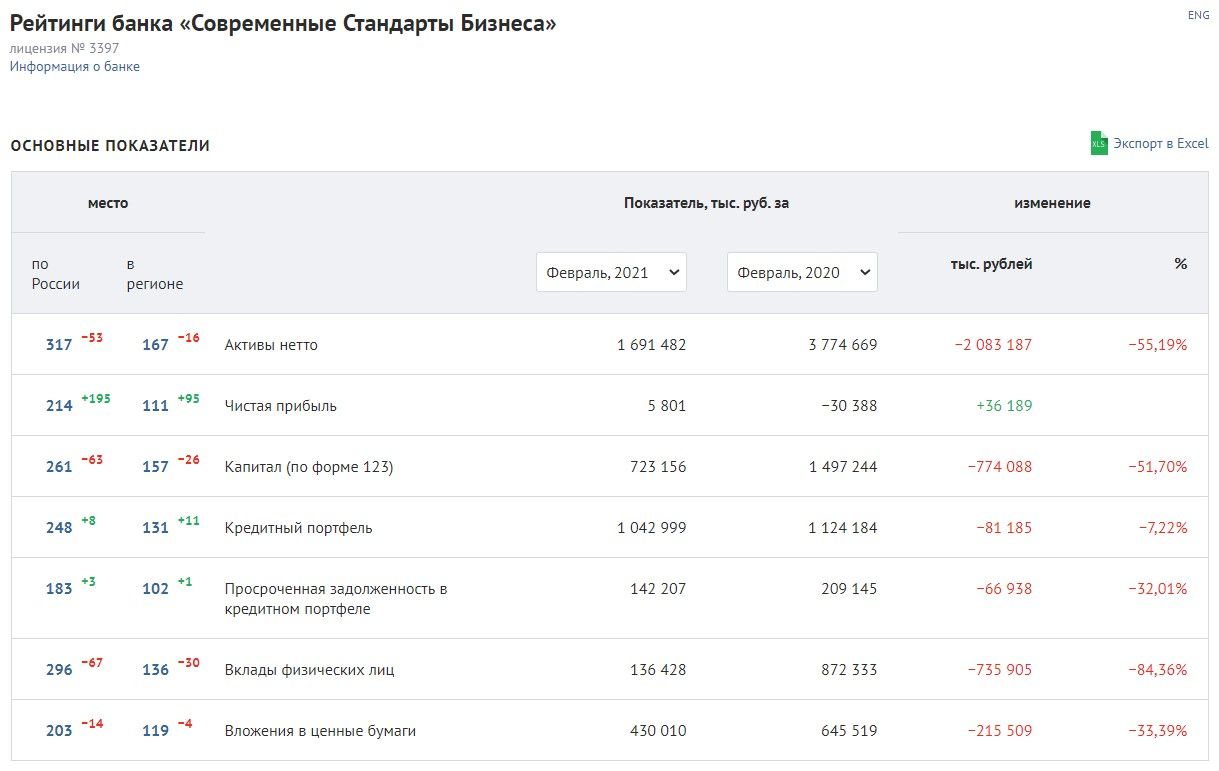 Against this background, it is not surprising that all three of the bank's key credit ratios were in the red zone. The decrease in the H1 indicator for the year was almost 29%, H2 - 11.3%, H3 - 20.2%. And the revocation of the bank's license shows that this is an objective analysis.

The fact that the bank is not doing well, could be guessed earlier. After all, almost all the owners of the bank previously got into a major international scandal with the purchase of a residence permit in Estonia. In 2011, the police of this country began an investigation against 147 citizens of the Russian Federation, who were suspected of buying a residence permit bypassing the official procedures for obtaining it.

According to Rosbalt, almost all of the owners and managers of Modern Business Standards received residence permits in the Baltic country. The list, which the police are working with, includes the chairman of the management board of the credit institution Pavel Kuleshov, as well as the shareholders of the companies that own the CB – Grigory and Natalia Polkachevs, Yevgeny and Victoria Predeins, Sergey Minko and Victoria Kuleshova (Pavel Kuleshov's wife).

All these businessmen gave a total of 650 thousand euros for obtaining a residence permit for themselves and their family members. The question is, what were they so afraid of in Russia, if they could seek to obtain a residence permit in Europe at any cost and in any way?

The answer may lie in the past of a key beneficiary of the SSTB, banker Yevgeny Predein. The fact is that, according to the authors of the Banksta telegram channel, allegedly previously Predein was the owner of The First Depositary bank, and it  was also taken the license away - allegedly for money laundering and "cashing".

The license was revoked in 2014. Later, in 2017, the Deposit Insurance Agency filed an application with the Moscow Arbitration Court to bring the controlling persons of the First Deposit Bank to justice for damages and to recover 47 million rubles from them. However, Predein was no longer among the owners mentioned in the statement - he was busy with a new banking project.

Among the owners of SStB, there are no less interesting people, scandals around whom could explain the possible desire of the bank's beneficiaries to massively acquire a residence permit in Europe.

According to the authors of the same Banksta telegram channel, Stanislav Kuznetsov, who could be related to the Public bank from Karachay-Cherkessia, allegedly "got mixed up" among the owners. It should be noted that we could not identify Kuznetsov as one of the owners - his last name is not included in the list provided in the Banki.ru system.

However, if there is a connection, it is important to remember that the Public bank was spotted in a loud scandal with the former senator of the Federation Council from Karachay-Cherkessia Rauf Arashukov and his father, the former adviser to the General director of Gazprom Mezhregiongaz LLC Raul Arashukov. Allegedly, Rauf Arashukov was served in the Public bank. Recall that the ex-senator is accused of involvement in the organization of the murder of two people, and his father - in multibillion embezzlement from Gazprom. This was reported by TASS.

If there were embezzlements, which credit institution could they pass through, and could the Public and SStB banks be part of the same scheme?

Continuing about the troubles of the bank, experts predicted the revocation of its license in 2019. According to the publication of Banks Today, then the bank lost in court to the Central Customs Administration and the Nizhnevartovsk Department of Capital Construction on an unfulfilled guarantee (received from another bank).

In the same year, according to the authors of the Banksta telegram channel, the employees of the SStBwere spotted in another murky story. Allegedly, they brought the money of their client, businessman Andrey Korotchenko to the fictitious office of Stroylesbank in Moscow to exchange 41 million rubles for foreign currency. Instead, the cashier disappeared with the customer's money.

However, in the search for an answer to why the SStBexisted, you can stumble upon a much more interesting story. It turns out that the SStD, in addition to the central office in Moscow, had another one - in the quiet forest town of Likhoslavl (Tver region). According to the authors of the Politver website, allegedly this office could be used in murky operations with the state order and sale of wood in the region through the SStD.

We are talking about two public procurement contracts from 2013, contracts No. 01363000546 13 000003 and 01361000005 13 000046. Customers — Municipal institution Financial Department of the administration of the Likhoslavlsky district and the Department of the Federal Treasury for the Tver Region. The subject of both contracts is the maintenance of bank accounts. Or rather - one balance account number 40116, to provide cash to the recipients of the budgets of the budget system of the Likhoslavl district. 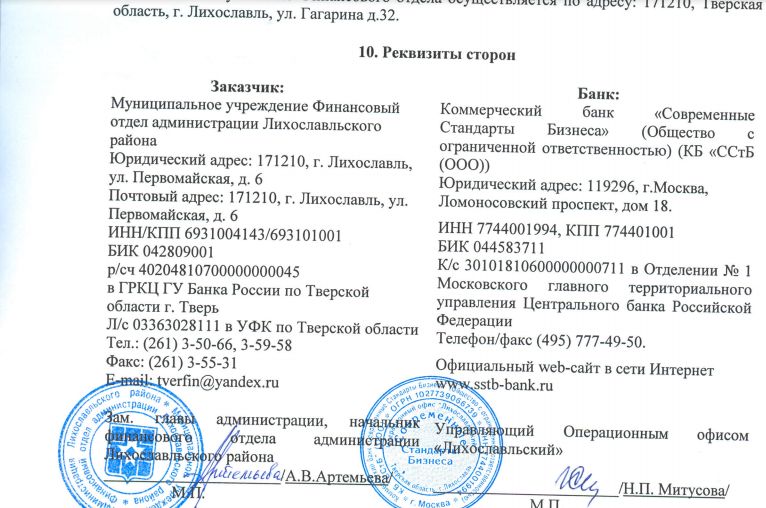 It seems that the bank opened an office in Likhoslavl specifically for these contracts, but there was a discrepancy – the contracts were terminated on the initiative of the customer in 2014 (administration) and 2015. In 2020, the Likhoslavl office was still operating. And somehow one can hardly believe that it was because of the fact that the town brought a lot of money to the bank.

At the same time, the funds had to go through the SStB from its own current account to the account of another person. Does it mean that the Central Bank took care of anti-money laundering measures for good reason?

The Modern Business Standards bank had very interesting business standards. It seems that the bank was engaged in anything but its direct honest banking activities, and could be needed by its beneficiaries for some possible middle-class scams.

In this context, it is even more strange that its license has been revoked only now. Was someone on the board of the regulator interested? Well, the reasons for the possible desire to get a residence permit anywhere but in Russia look very prosaic in the light of all these scandals. In Russia, they may ask for it...