Head of Bashkortostan Radiy Khabirov is losing ground after Kushtau.

As the correspondent of The Moscow Post  reports, Head of Bashkortostan Radiy Khabirov lost much authority in connection with the last conflict of the activists for the protection of mount Kushtau. On the one hand, his position is weakened in front of the Federal centre. He failed to prove himself as a leader and allowed a large-scale civil protest, which in some places, what concerns "attack" on activists, is similar to the unauthorized rallies taking place in Belarus, or the same Khabarovsk actions.

There was everything: tear gas, batons, hundreds of security forces and arrests in closed court sessions. On the other hand, Khabirov could not meet the expectations of business structures - a major producer of soda – JSC Bashkir Soda Company (BSC). Development of these fields is strategically important: BSC's raw material base is being depleted, and alternative options are probably expensive. And as the company's economy shows, owners are very fond of billions in their pockets and they make profit from the "national heritage" and "destruction of natural monuments".

By the way, at one time, former Head of Bashkortostan Rustem Khamitov managed to defend these deposits in front of the former leadership, in the person of Albert Khabirov. Khabirov, apparently, decided to push the project, but failed.

Now after the outrage, he said that the development of the mountain would be suspended until a compromise solution. But the compromise may assume his removal from office.

The victory of civil society

Two days at the foot of the mountain Kushtau there were clashes of eco-activists with private individuals, OMON (special forces), representatives of the BSC, whose equipment unsuccessfully tried to start work on geological exploration. According to Kommersant, the unique natural monument was protected by 7 to 10 thousand people.

In early August, people pitched tents near the mountain. Deforestation was its forerunner,  Interfax wrote. At that time Radiy Khabirov declared that Kushtau had no protection status and the mount would be developed, in spite of perturbations.

Later, according to activists, they were used tear gas, batons, and just fists. According to Novaya Gazeta's report, the two dozen tents were raided by a PSC called Vershina, which was hired by BSC, as well as some young guys who were athletes. They were allegedly promised 3000 rubles each for attacking the camp, but the enterprising "students" managed to steal laptops, cameras and other things from the activists. 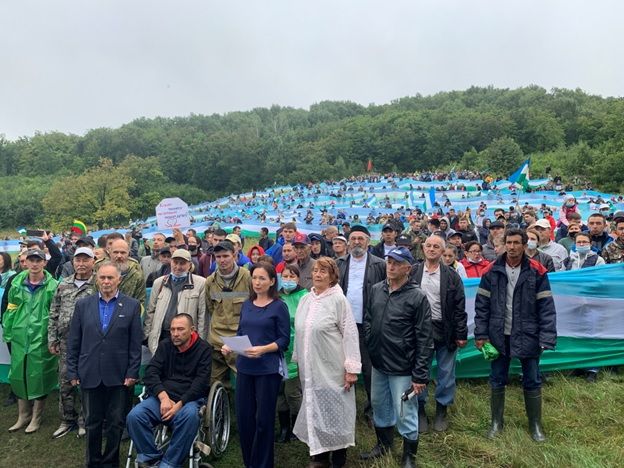 Why did so many people come to the defense without fear of clash? This place is not only the subject of legends about Agideli. This is also a natural monument: the age of shikhans, limestone mountains in Bashkortostan, according to scientists, is from 230 to 300 million years. They were formed on the site of the long-retreating Perm sea, and became not only  Bashkortostan's beauty, but also a habitat for dozens of endangered animals and plants listed in the Red Book. Some of them are nowhere else on Earth.

But, apparently, the management and Radiy Khabirov does not care. Is the main thing for them that the company makes a lot of money for small investment?

On August 16, Khabirov was simply forced to address the protesters. After that, the BSC equipment left the mountain. People who were spreading rumours called this moment historical, as Khabirov did not talk to the active part of society before, and now he directly depends on public opinion.

In addition, the protesters demanded the resignation of Chairman of the Board of Directors of Bashinform Rostislav Murzagulov, Khabirov "broke" and in a pure "bandit style" said: "You don't give up your own, do you? I do not either." As it was previously written by UtroNews, Murzagulov has a dubious reputation: allegedly, he is a kind of provocateur and knows how to obtain assets and state contracts.

How important is the resource?

But why did BSC cling to this mountain? The company's management and authorities often emphasize that BSC is not only one of the major taxpayers, but also an enterprise that provides a significant part of working places. And if there is no new raw material base, then, in fact, no work, no taxes.

But, in fact, it is different. According to the Novaya Gazeta publication with reference to the appeal of the defenders, earlier there were large salaries and care for employees at the plant, there were different social objects: a swimming pool, a culture park, schools, a sports palace, however, now "the company has removed all the objects from the balance", and "the owners withdraw funds abroad". Employees are not afraid of losing their jobs, as the management assures. In addition, there are alternative options for developing raw material base, without destroying the property of their own region. It simply requires investment. And they don't want to pay extra.

The conflict did not appear overnight, as they say. Local eco-activists have repeatedly built human chains to protect the mountains after JSC Syrievaya Kompaniya (Raw Material Supply Company (affiliated with BSC) received a license to explore and extract minerals from the Kushtau deposit.

But why did Khabirov initially turn a blind eye to this and try to hush up the situation?

As Interfax wrote, the owners of BSC badly need a new raw material base. Reserves from the now existing deposit of Shakhtau will only be enough until the end of this year. And money is needed!

BSC is now owned by Bashkhim company of Dmitry Pyatkin and Sergey Chernikov, who have 57% of the controlling stake, and Bashkortostan owns 38% through the Regionalny Fond state investment company.

At the same time, in 2019, BSC paid its shareholders a record dividend of about 13 billion rubles. But the withdrawal of a large amount of money, apparently, is just beginning.

The scandals of the owners

Bashkir Soda Company was created in 2013 through the merger of JSC Soda, JSC Kaustic and JSC Transneftekhim. In general, it seems that there are a lot of colourful people among the owners of BSC. It was written by proufu.ru. In the group of owners, along with Sergey Chernikov, there was also the influence of Albert Kharisov.

As it was previously written by The Moscow Post, at one time, Soda was withdrawn from a number of strategic enterprises, and the government of the Republic rejected a "golden" stock in BSC. But it didn't simply reject. Albert Kharisov could have been behind it. Previously, he was Deputy Prime Minister of the government of Bashkortostan, and from there he went straight to the chair of the head of the BSC.

The enterprise was "separated" in complicated schemes. At first, through the purchase of securities, Sergey Chernikov acquired Kaustic through Sovlink and PetroTek holding, thereby standing in the way of former Bashkortostan President Murtaza Rakhimov's son Ural, who at that time held the post of Chairman of the Boards of Directors of the Bashkir fuel company, which already began to pull together the entire oil economy of the Republic, as Versia wrote.

After that, JSC Soda entered the game. At that time, the owner of the blocking stake of 34.8% of the company's shares was the company's management, headed by Vyacheslav Titov. But he gave up after Kharisov's probable pressure.

Later, apparently due to close relations with the authorities, a group of partners secured an exclusive right to sell all products of JSC Kaustic at first, and then JSC Soda through an intermediary — formed in 2003 JSC United Trade Company (ETK). The businessmen got hooked on full cash flow through ETK. The name of Albert Kharisov was sometimes mentioned in stories with scandalous bankruptcy of a number of organizations.

In addition, at least 4 years ago, former Head of Bashkortostan Rustem Khamitov was against the development of deposits in the Sterlitamak mountains. Apparently then it was possible to roll back the attack thanks to the influence of Khamitov. What can not be said about Khabirov, who followed the temptation of business and lost the fight.