Sergey Kononov and Yuri Freydis may be behind the scandal in the largest commercial port of Sakhalin. The first one is a failed Crimean ex-Minister and owner of a fallen Bank. The second one is the full namesake of a previously convicted raider with a dubious past.

As the correspondent of The Moscow Post reports, there is another scandal in the Kholmsky commercial sea port (KhCSP) on Sakhalin. The owner of a SUV blocked the entrance to the port in protest against charging truck drivers 21 thousand rubles for driving through its territory.

Scandals, including inspections of Control and Supervisory authorities, have shaken the Kholmsky seaport since 2018, when it changed its ownership structure. According to Interfax, then the largest shareholders of PJSC KhCSP were Moscow JSC Petrosakh (22.9%), JSC Lipetsk Vodka Company (11.72%) and Yuri Freydis (20.11%).

With them, a major "problem" happened at the beginning of 2020, when the Sakhalin transport Prosecutor's office and the FAS visited it. The reason was the blocking of the passage to the port of transport of companies working there. Moreover, a number of companies began to be disconnected from water and electricity supply.

It turned out that from January 1, 2020, PJSC KhCSP, with the submission of new owners, raised the tariff for driving through the port territory for vans. Previously, it cost 3 thousand rubles, and became 6 thousand rubles. This was reported by Interfax. For large-size transport - 12 thousand rubles.

Then the problem was resolved. However, for this purpose it was necessary to seize part of the port's stocks, which was also told by journalists of Interfax. Apparently, this is the only thing that affected the new beneficiaries. But, as the new scandal shows, not for a long time.

Who should be responsible for what is happening in the largest sea port of Sakhalin, through which up to 2.5 million tons of cargo passes annually, if not the beneficiaries of its work?

Who is Sergey Kononov?

Who is behind the Petrosakh? It is not known for certain, and therefore it seems that this information is hidden. Formally, it is owned by the Cyprus offshore company Nimir Petroleum Petrosakh Limited, as well as the already liquidated RSUE SNK. The latter belonged to the Sakhalin region in the past. 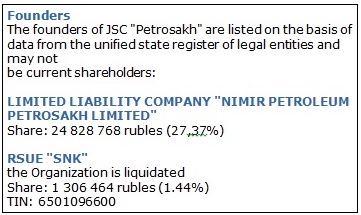 It is in the offshore sector that the profits of KhCSP and Petrosakh can go. The latter has a loss of 160 million rubles for 2019 with revenue of 1.5 billion rubles. With such a gold mine as KhCSP, this is very suspicious. And Sergey Kononov works as a President there. Can he be a key beneficiary both of Petrosakh and KhCSP? 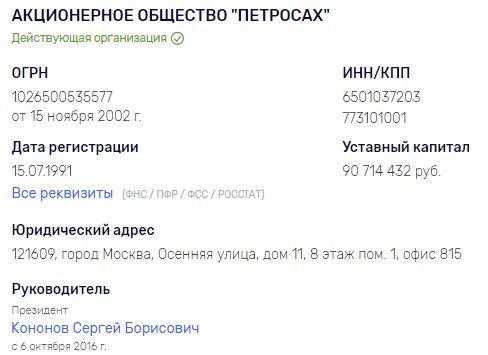 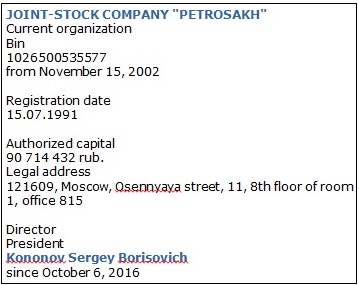 Previously, Petrosakh was a subsidiary of the now-liquidated small oil company Urals Energy, which is associated with many scandals. He was its CEO. And it was tied to another offshore Urals Energy Public Company Limited.

It also remains the owner of a number of companies with obvious signs of fictitiousness. For example, LLC Vendorf, which with zero revenue managed to go to a loss of 239 million rubles in 2019. And only one person works there.

It is rumoured that Leonid Dyachenko, the former son-in-law of Russian ex-President Boris Yeltsin could be the former owner of Urals Energy. Member of the so-called Yeltsin family. If this is true, then the fuse from such connections could be enough for Kononov to get his hands on a number of assets, including KhCSP.

Meanwhile, Sergey Kononov did not appear on Sakhalin out of nowhere. He comes from Crimea.

As the authors of the ERZ website state, allegedly head of the Crimea Sergey Aksenov was very unhappy that the inefficient structure of the industry management was created in the region with such a Minister and there was no mechanism for housing investors.

Apparently, Kononov simply failed. Or was he doing it in such a way that corruption could flourish in the region? Kononov wrote a statement on his own, but spiteful critics whisper - allegedly, he was very, very "asked".

Thus, since 2018, Kononov may have been the beneficiary of the KhCSP, which is shaken by scandals. But this is not the only scandalous asset, which he may relate to. After all, earlier the same Kononov was the owner (44%) of the odious Transnational Bank.

This Bank was stripped of its license in 2015. As follows from the Banki.ru information service, for the fact that the Bank conducted a high-risk credit policy, investing in low-quality assets. To paraphrase - the depositors' money was allegedly put somewhere, from where it could then disappear without a trace. For example, to the same Cyprus offshore accounts?

Though there is one more interesting fact: the owners and managers of the Bank were tried to attract to subsidiary liability from the DIA. The institution asked to freeze the assets of the former owners of the Bank for 12 billion rubles. Court proceedings continued until 2019.

According to the Rapsi publication, the DIA, checking the circumstances of the Bank's bankruptcy, found that the Bank's controlling persons committed culpable actions to replace the organization's liquid assets (cash) with illiquid loan debt of technical legal entities.

But despite the judicial practice, the DIA was denied the claim! Who is Mr. Sergey Kononov, and did anyone from the power establishment help him? For example, someone who might have been associated with the Yeltsin family, but now continues to own large assets and enjoy the favour of judges?

It could have been someone else. For example, Deputy Secretary of the security Council of the Russian Federation Nikolay Patrushev, former Interior Minister Rashid Nurgaliyev. Previously, the full namesake of his son, Rashid Rashidovich Nurgaliyev, was part of the owners of Kamchatkomagroprombank. The same Bank lent to the business of the already mentioned Sergey Kononov and his family. This was reported by Kommersant. 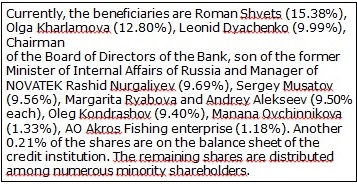 At the beginning of 2019, the Bank's license was revoked. As follows from the information on the Banki.ru service literally: "in the activities of PJSC Kamchatkomagroprombank there were signs of unfair actions of the management to withdraw liquid assets with damage to the interests of creditors and depositors."

Allegedly, information about this should have been sent to the competent authorities. But will they do anything if the Nurgaliyev Family is behind Kononov's facade? Unlikely.

Who is Yuri  Freydis?

Meanwhile, Kononov's busted Bank could also have done some damage before the license was revoked. For example, he could lend to the same Urals Energy. It, in its turn, gave allegedly unsecured loans to the full namesake of Yuri Freydis, the beneficiary of KhCSP. Interfax wrote about these loans.

In October 2018, a corporate conflict broke out at Urals Energy - just on this basis. Then the Board of Directors identified transactions and loans worth about $5.1 million, which were issued by the largest shareholder Sergey Kononov, who is also the head of JSC Petrosakh.

In the autumn of the same year, an independent investigation revealed that loans and transactions related to KhCSP alone amounted to approximately 204 million rubles. These operations include unsecured loans to employee of Petrosakh, Freydis for 96 million rubles at a reduced interest rate, maturing in June 2019.

In addition, Kononov sold Lipetsk Vodka Company (and here is the third possible beneficiary of the KhCSP!) part of the Urals Energy package in KhCSP for 22 million rubles, and half of it was sold on deferred payment terms.

Against the background of this scandal, other Freydis cases began to be recalled in the market. Back in 2013, evil tongues claimed that he was a member of a gang of "solvers" who could cooperate with former Deputy head of Rosreestr Sergey Sapelnikov. According to rumours, they issued permits for illegal buildings. The Moscow Post wrote about that situation.

After that, some "solvers", including the full namesake of Yuri Freydis (perhaps it was the same Freydis) were caught and put on trial in another case of the raider seizure of a building in the centre of Moscow. Then they, and that certain Freydis together with him, received for three ones 10,5 years of prison and serious fines. This was reported by Moskovsky Komsomolets. Apparently, by 2018, when KhCSP changed ownership, Freydis, which is referred to in the material of Komsomolets had already settled all the problems with the law.

There is another character worthy of attention in the whole story with KhCSP. We are talking about the port Director Nikolay Viktorovich Zemlyanukhin, who was appointed on November 28, 2018 by the new owners. Almost as soon as they got control of this port. 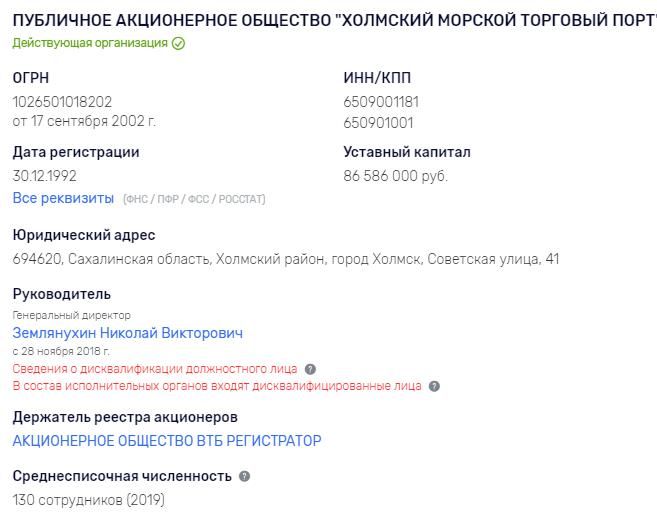 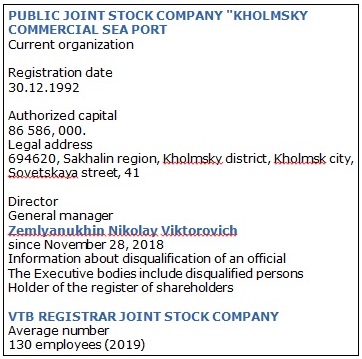 Zemlyanukhin is a great addition to the company described above. The fact is that this man was disqualified in August 2020 - just after all the stories with blocking the work of companies in the port. There were a lot of instructions from the Prosecutor's office and the OFAS, as Sakhalin info journalists of Sakhalin Info wrote. Apparently, Zemlyanukhin was in no hurry to fulfill them. This could be the reason for disqualification.

Mr. Zemlyanukhin is generally a famous person. At the beginning of the last decade, he got into an ugly story. According to the authors of the Svoya Kolokolnya website, allegedly in 2014 a person with the same name and surname was sent to a detention centre in Ryazan.

According to investigators, Zemlyanukhin, being the owner of the Zakharyevsky meat processing plant, took a Bank loan for 50 million rubles for the purpose of fraud, and did not return it. As a result, he was allegedly sentenced to 4 years in prison, but then the sentence was changed, and he was released in 2016. The same story was told by the Federal media, for example, Rossiyskaya Gazeta.

This is a swirl of companies, events, and dubious personalities. And now the question is - if everything that is written above, including unconfirmed information, is true, could something good happen to KhCSP with such possible owners? The question, however, is rhetorical.