KOKKi and coupons, pledges and auctions: Vladimir Potanin goes to you

The Russian oligarch launched a stormy financial activity, which may turn out to be another "bluff."

Norilsk Nickel Vladimir Potanin issued bonds worth 25 billion rubles at almost 10% per annum. Recently, despite a lot of factors that have a rather restraining effect on the market, Potanin has acquired new assets and produces other large financial transactions.

The Moscow Post correspondent understood the reasons for this behavior of the merchant.

This year Potanin acquired a lot of bank assets - from the processing "Company of United Credit Cards" (KOKK), operating under the United Card Services (UCS) brand and the share of the French banking group Societe Generale in the Russian Rosbank to Tinkoff Bank.

And although Oleg Tinkov said that he was forced to sell his brainchild at a price of about 3% of its real value, the money "flew away" not small. In addition, Potanin's activity in the field in which he previously almost did not work raises questions.

And for a reason - after one of the country's largest miners entered the bank, he "literally drowned" in a series of scandals and lost a lot of customers. For example, people began to issue installments to people for viewing stories, the bank officially confirmed that it did this without the consent of the client, justifying that "a lot of customers forget to connect installments after viewing the offer" - wrote Banki.ru. And the fact that people may not need it, Comrade Potanin did not think about it...

As for Rosbank, the situation here is even more interesting. Once it belonged to the Potaninsky Interros, but during the period of "sharing" assets with Mikhail Prokhorov, Rosbank was sold to the French. Moreover, with a debt of 140 million rubles hanging on Norilsk Nickel. As a result of simple manipulations, which we talked about in detail in the material "Interros in the same place: Vladimir Potanin's system can fail" he got rid of the obligation to pay this debt and returned the bank now with the repaid obligations.

In September of this year, Potanin transferred Rosbank to a charitable foundation in order not to fall under sanctions and "fill the endowment of his charitable foundation with up to 100 billion rubles," RBC quotes the newly-minted banker. Simply put - withdraw the bank's funds through the fund?

Falling down the tangent

If you look at the current financial affairs of Potanin, or rather his companies, the question arises whether the structures of the kind Vladimir Olegovich are engaged in the creation of structures resembling "pyramids." After all, his affairs to put it mildly, not very much.

Norilsk Nickel in 2022 increased profits and increased debts "- an article with this title was published on Vedomosti in August this year. EBITDA (profit before tax deductions, etc.) of the company fell by 16% to $4.8 billion in six months. At the same time, the net debt of the state corporation doubled to $10 billion.

Could the money settle in offshore companies associated with the organization? Photo: https://www.rusprofile.ru

In the hands of journalists of The Moscow Post there is also a curious document entitled "Comparative financial analysis of the indicators of INTERROS Holding Company LLC for 2021." In it, based on data from the Federal Tax Service, key financial indicators of Interros are compared with similar ones - throughout the industry for the same period.

According to the document, if we pay attention to the coefficient of provision with own working capital, then Interros has a significantly worse average industry: at least 75% of organizations in 2021 had the best value.

The same applies to the ratio of current assets and short-term liabilities of the company. This threatens the solvency of the organization in the long and medium term.

The ratio of liquid assets and short-term liabilities is significantly worse than the industry average, which may lead to a loss of solvency in the medium term.

In addition, Interros does not have inventory in the Balance Sheet. The company went into colossal losses from sales. 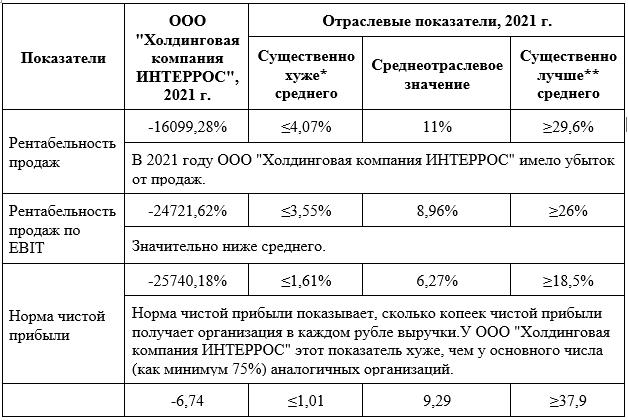 Interros, roughly speaking, does not pay off, and very seriously. Photo: Archive of The Moscow Post

The company apparently does not give up debts. Indeed, due to the lack of profit before taxation, according to the document, in 2021 the interest coverage coefficient turned out to be negative.

The fund return (shows how many rubles of revenue fall on each ruble of the value of the organization's fixed assets) of the corporation is significantly lower than the indicator for similar organizations.

Accounts receivable management is delivered significantly worse than in similar organizations. And in general, the organization takes much longer to receive revenue equal to the value of current assets than comparable enterprises.

If you look at all-Russian enterprises, where the spectrum is many times wider than the industry spectrum, Interros still remains somewhere at the bottom, although in a conditional three meters closer to the surface than it could be. But from here, it seems, do not get out.

For clarity, we give a table in which the points are described how the corporation under the management of Potanin feels in 2021. 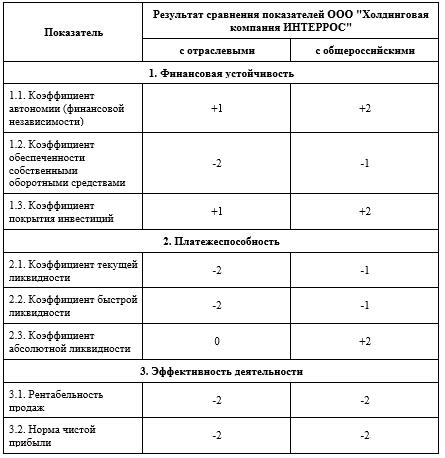 The resulting value is interpreted as follows

• from + 1 to + 2 inclusive - financial condition is much better than average;

• from 0.11 to + 1 inclusive - financial condition is better than average;

• from -2 inclusive to -1 - significantly worse than average.

And we don't care

It is faintly believed that, taking into account the current actions of Potanin, who purchases bank assets to the right and left (although Interros and Norilsk Nickel need money), the financial condition of his main assets will improve. It is likely that soon we will see the empire collapse.

And, unfortunately, in this case, not so much Potanin will suffer, but also ordinary employees of enterprises and the state that uses these reserves.

How Vladimir Potanin treats his assets is clear from numerous accidents at the enterprises of the same Norilsk Nickel. From those that take people's lives to those that cause irreparable damage to the ecology of Russia. In 2020, Vladimir Putin himself had to scold Potanin for a large-scale oil spill caused by the fact that the enterprise simply did not change the capacity that served its term.

Perhaps even then it was necessary to make radical personnel decisions, because after a couple of years Potanin almost played Russian roulette with Oleg Deripaska, where Norilsk Nickel was at stake. What serious attitude to a strategically important enterprise can we talk about?

The entrepreneur, apparently, is not going to repay debts either. There is nowhere to go.