Why no prizes and awards can no longer change the puzzling reputation of hotelier Alexander Klyachin.

According to the correspondent of The Moscow Post, excellent news came for the famous developer and hotelier Alexander Klyachin.

It turns out that his hotel management company AZIMUT Hotels won two World Travel Awards 2021 nominations at once. Applause from the public and an honorary diploma were earned by Klyachin hotels in Moscow and St. Petersburg.

Given the scandalousness of Klyachin himself and his hotels, a similar outcome of the competition looks suspicious. Even more so, he seems to know who was suddenly bypassed by Klyachin's office. And these are such prestigious places as National, Swissotel Red Hills, StandArt, Helvetia and Lotte Hotel in both capitals.

It is no secret to anyone that such bonuses - we will not talk about specifically this, but in general - are often bought for money by future winners. At the same time, not less, but more successful and famous competitors, not burdened with various kinds of scandals. 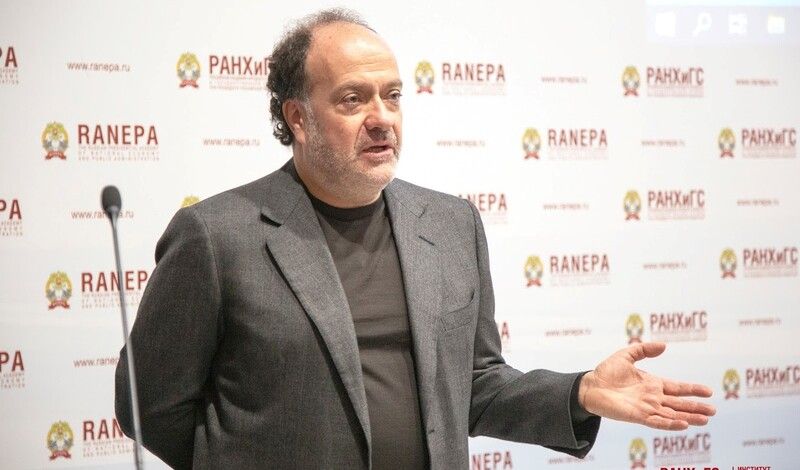 It seems very much that the unexpected victory of Klyachin's company is designed to "retouch" his reputation, which has quite faded in recent years. Since the beginning of the zero years, a businessman and his company Nerl have been trying to attribute the glory of raiders who save the owners of land shares in collective farms near Moscow, and then receive property rights from gullible and drunken citizens.

But these rumors remained rumors, and Klyachin very quickly became a large, respectable businessman. He was also engaged in banking through his bank Russian Development Bank. The latter, by the way, was lit up in almost all operations with a sudden change of ownership of enterprises such as NPO Mosspetsavtomatika, OJSC Centrdorstroy, the Krasnaya Rosa weaving factory, Gipromez, and many others.

All of them, after a series of financial and legal operations, "suddenly" were in the orbit of the influence of Alexander Klyachin himself. And he so "dispersed" that he began to claim huge and tidy territories in the suburbs. And he got into a major scandal, which, perhaps, affected his reputation the most.

Unfortunately, he also influenced the reputation of Russia as a reliable harbor for foreign investors. Because Klyachin, neither much nor little, tried to get ownership of a piece of territory near Moscow of 16 hectares, which by that time was on lease from the most famous Swedish company in the world - IKEA.

The story began back in 1993, when a foreign concern leased a plot of land of 20 hectares from the administration of the city of Khimki with the right of subsequent redemption. Previously, the site was owned by Khimki Collective Economic Enterprise (KSHP). In 2007, the Swedes decided to build Khimki Business Park there at 40 thousand square meters. meters, and bought 16.5 hectares from the authorities. The amount of the transaction amounted to about 100 million rubles.

And everything seems to be great - an investor on our land, investing money, paying taxes... How suddenly in 2012, IKEA received a lawsuit from JSC KSP Khimki, the successor of JSC KSHP, which at that time was already controlled by Alexander Klyachin.

According to the entrepreneur's lawyers, the deal to rent and acquire the site was illegal, which means that a tidbit of land near Moscow, on which IKEA has already placed a business center, should return to KSHP. That is, to Klyachin. And the plaintiff demanded to demolish the business center itself. 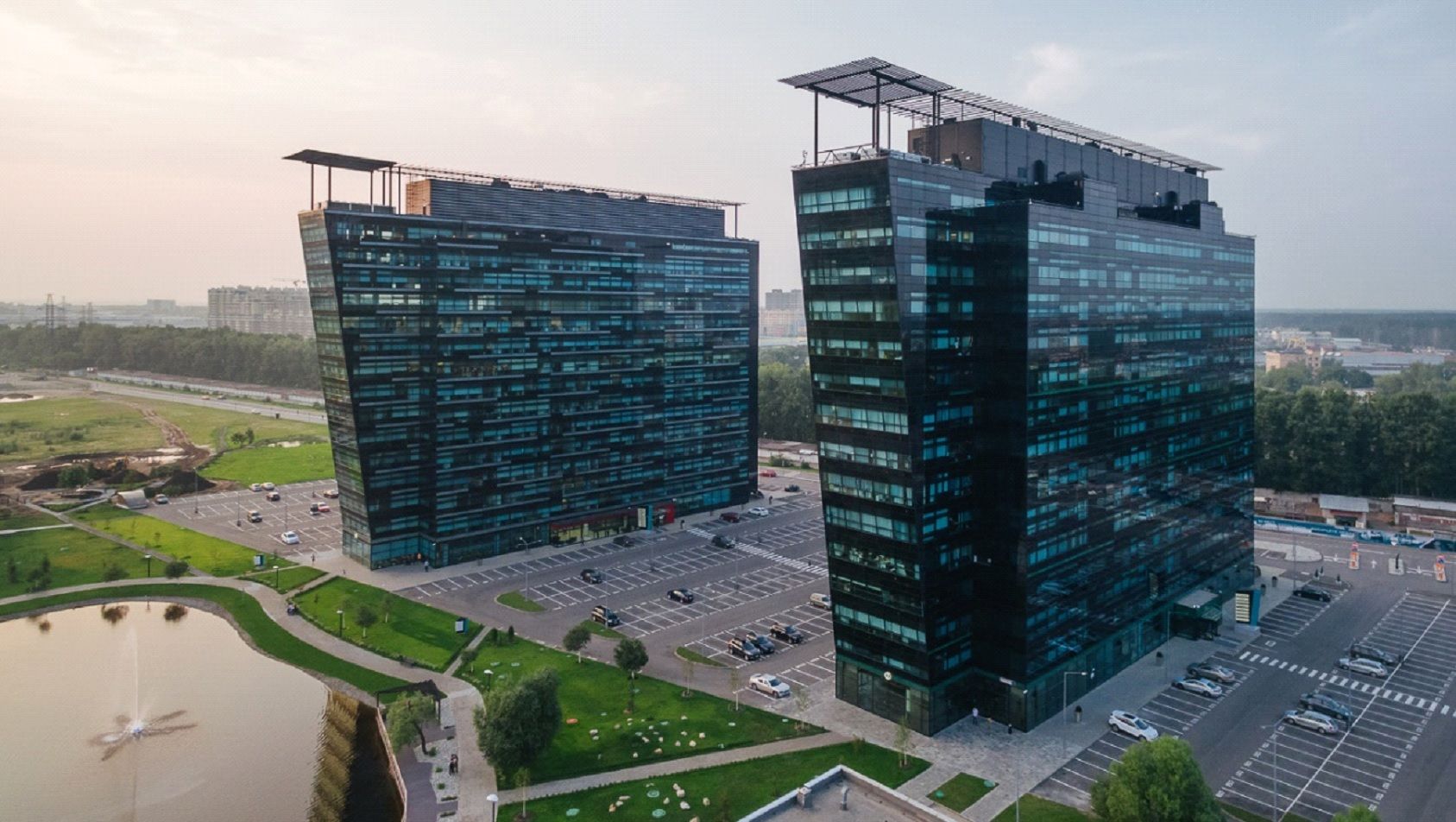 Even then, the market said that such claims would not end up in anything good either for Klyachin or for Russia as a whole. It turns out that in Russia the private property of a foreign company, which it bought in accordance with all norms and laws, is called into question. And not with a private person, but with the authorities of the region.

Two years passed, during which, apparently, the court dealt with the background of the case. As a result, in 2014, the court rejected the KSP lawsuit. At the same time, he pointed out that the plaintiff's title documents on the land do not allow us to conclude whether the disputed plot belonged to the lands of the KSP, since they do not have documentary evidence of the borders.

In addition, the court noted that the council of KSP Khimki, the collective executive body of the plaintiff, in 1993 agreed to the seizure and transfer of 20 hectares of land to the district, and this decision was not challenged. Finally, the court pointed to the omission of the limitation period, including the limit, which is 10 years in civil relations. About this wrote RIA Novosti.

Klyachin, it seems, was a lot annoyed by this event, and allegedly tried to connect all the available opportunities and connections in order to achieve what he wanted. By the way, back in 2014, a criminal case of fraud related to disputed land was in the proceedings of the TFR. It was initiated on the basis of operational materials collected by employees of the T department of the GUEBiPK of the Ministry of Internal Affairs, from which it followed that when acquiring the land on which Khimki Business Park was built, there was a fact of fraud.

According to rumors, it could have been organized at the guilty insistence of Mr. Klyachin himself, to whom evil rumor attributed acquaintance with the famous former head of the FSB department Viktor Voronin and his former deputy Dmitry Frolov.

The latter was the head of the banking department in the FSB unit, and, as it is believed, could get acquainted with Klyachin at the beginning of the zero years, when he owned shares in the Russian Development Bank.

At the same time, security forces suddenly visited IKEA - in 2016, searches were held there. The company considered this almost part of the company for the raider seizure of the holding's land. About this wrote RIA Novosti. Klyachin, of course, categorically rejected such a version.

But the case went neither shaky nor rolling, and the courts, meanwhile, sided with IKEA. And in 2016, another case of fraud on an especially large scale was opened. During the investigation, it was allegedly found out that a person close to IKEA, "having intent to steal someone else's property, forged an extract from the minutes of the Khimki KSHP meeting.

Then the management of the enterprise allegedly agreed to provide the administration of the Khimki district with a land plot of more than 16 hectares in the 23rd km of the Leningrad highway "for use for state and public needs."

As the examination conducted as part of the investigation showed, the signatures of the board members of the KSHP on the document turned out to be fake, and the investigation tried to establish the involvement of the Russian daughter of the Swedish company in this. About this wrote Kommersant. 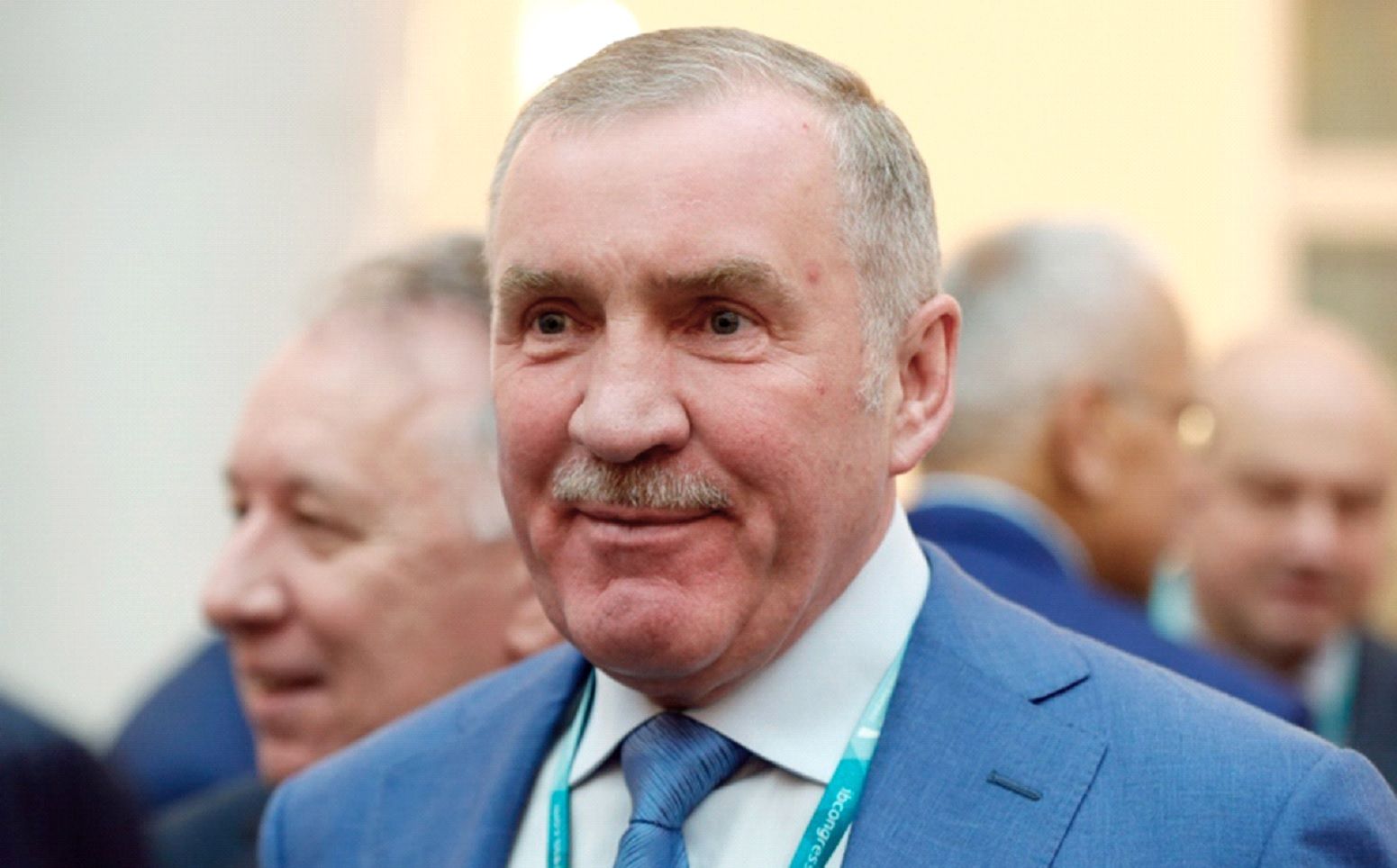 At the same time, the evidence was clearly tight, but Klyachin did not wait for the results. And already in 2017, Khimki-Molzhaninovo JSC filed a new application with the court to review the case of 16 hectares in Khimki for newly discovered circumstances. The plaintiff attributed to them the facts established in the criminal case against the former head of the Khimki district, Yuri Korablin, and the official of the district administration, Igor Goncharenko.

In connection with the death of both defendants, the investigating authorities issued a decision to terminate the criminal case, which states that during the investigation it was established that a number of documents were falsified, which served as the basis for the transfer of the disputed land plot to IKEA Hanim LTD LLC.

As a result, the Arbitration Court of the Moscow Region stopped proceedings on the lawsuit of Khimki-Molzhaniovo JSC, opened for newly discovered circumstances. That is, Mr. Klyachin suffered a final defeat, and even risked being called a heavyweight, "frightening" by his ambitions of foreign investors.

In April 2021, a new turn took place. The Dorogomilovsky District Court of Moscow ruled in a scandalous case against the ex-head of the Khimki Land Committee. On Friday, April 23, 2021, Judge Galina Talanina found Marina Dunyushina guilty of fraud on an especially large scale and sentenced her to 4 years of probation and a fine of 500 thousand rubles. About this wrote Lenta.ru.

Apparently, now Klyachin will actively try to use this case to continue the Khimki epic. Amazing determination, which probably has already scared many potential and decent investors from the land near Moscow.

The negative train from this situation goes after Klyachin to this day. They do not add to his positivity and scandals related to the hotel business. But still, it was the situation with IKEA that made him famous throughout the country. Against this background, even the proceedings of Alexander Klyachin with his former partner, the owner of the PIK Group of Companies Sergey Gordeev are sidelined.

And these proceedings are noteworthy. After all, Sergey Gordeev is a native of the infamous Rosbilding office. Earlier, RBC journalists wrote about this company as the largest Russian raider. Well, the fact that Klyachin also tried to attribute the glory of raiding, we already mentioned. They say this goes to like this.

This story is connected with the company KR Properties, from which he rented the area of PIK Group Sergey Gordeev. Klyachin was the first to file a lawsuit - he demanded through the court 30 million rubles due to the non-payment by PIC of payments for the rental of space in the Dawn business center in Moscow.

In response, Klyachin's company received two lawsuits at once. In the first lawsuit, the developer demanded to terminate the lease and compensate for losses of 222 million rubles. In another, to reimburse 406 million rubles from OJSC Moscow Machine-Building Plant Dawn. 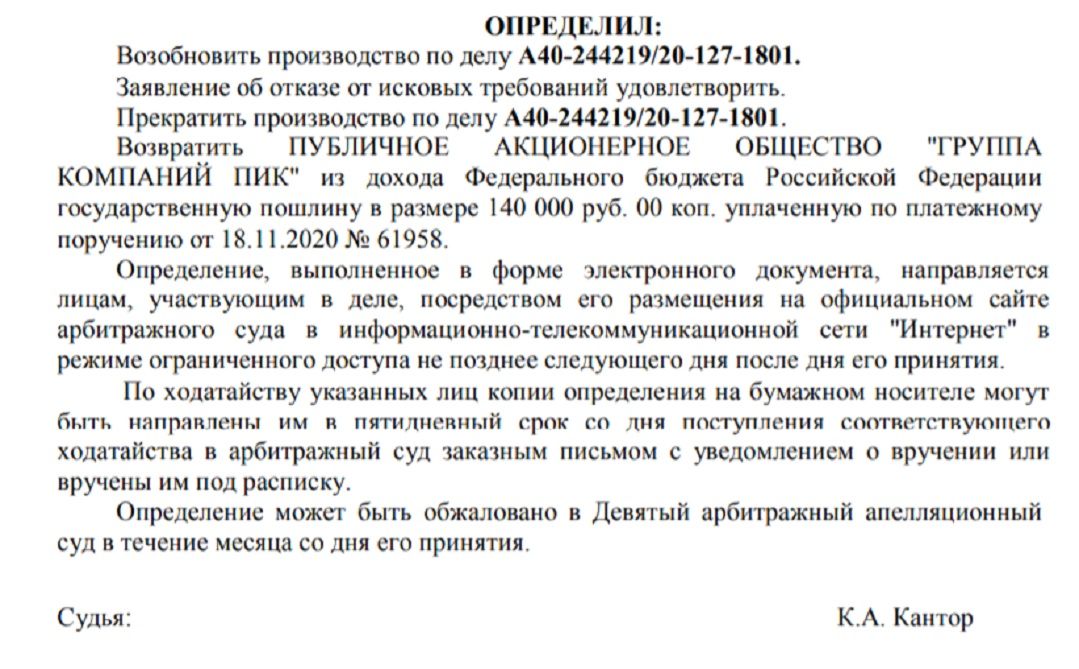 However, the consideration of the case was suspended until a court decision was made on the first trial, and after Gordeev suddenly refused his claims, and the case was dismissed. The court definition can be viewed here.

But it seems that this is only part of the new large-scale epic of Mr. Klyachin - already against Sergei Gordeev and his PIC. And the governor of the Moscow Region Andrei Vorobyov could not "watch" Gordeev. Indeed, in the same Khimki, in the territory remaining for Khimki-Molzhaninovo JSC near IKEA, Alexander Klyachin was going to build a large transport and transfer hub.

In addition, back in 2018, KSHP became a partner of Aircraft Group of Companies, which is firmly associated with Andrei Vorobyov's younger brother Maxim. He was one of the founders of the company, and now owns shares in its subsidiary Aircraft Two Capitals. Together, KSHP and Aircraft are going to build up more than 3.5 thousand square meters. meters of various real estate on the lands of the former collective farm.

And this is another argument for him for the courts to revise transactions of many years ago and demolish the IKEA business center nearby. For Vorobyov's image, the new TPU will not interfere, in addition, there may be other motivations. But this is unlikely to help change the image of the governor of the Moscow Region as a whole, as no prizes and awards will help change Klyachin's reputation.