Khachaturyants and Gref built themselves "Gotek"

The Moscow Post found another possible "thread" of the withdrawal of Sberbank funds to offshore by the former deputy German Gref. The head of Sberbank himself is also involved in this?

Austrian packaging manufacturer Mondi sold its business in Russia to Gotek. As the correspondent of The Moscow Post managed to find out, the head of Sberbank German Gref and his longtime acquaintance Ashot Khachaturyants could be interested in the deal.

Who is hiding behind offshore

"Gotek" has been owned by Vladimir Chuikov since time immemorial. But recently, significant changes took place in the structure of the company, as a result of which the company became controlled by Sberbank.

Since October of this year, Gotek has been owned by the Cypriot offshore SALGON INVESTMENTS LIMITED, registered in Kaliningrad. The directors of the company are Oleg Bushnev and Andrey Klochkov. According to Interfax, the offshore belongs to Cyprus and Enercom Limited (49%) and Wythall International Ltd (51%). The latter is owned by Vladimir Chuikov and members of his family. The remainder of SALGON INVESTMENTS LIMITED is controlled by Sberbank.

Gotek began to take loans from Sberbank more than a decade ago. By 2010, the producer's obligations to the bank reached 6 billion rubles. Sberbank then agreed on a deal to transfer 60% of the group to its management. In 2012, Chuikov bought back the shares of the enterprise. But in the future, apparently, he continued to take loans from Sberbank, which led to the fact that the bank again, in fact, ended up in the capital of the company.

What is such stealth for?

The most interesting thing is that after 2012, perturbations in the company were not covered in the media. According to the authors of the Aibireg.ru website, allegedly Sberbank in 2013 approved another restructuring of the long-term loan to Gotek, extending its repayment terms by six years. 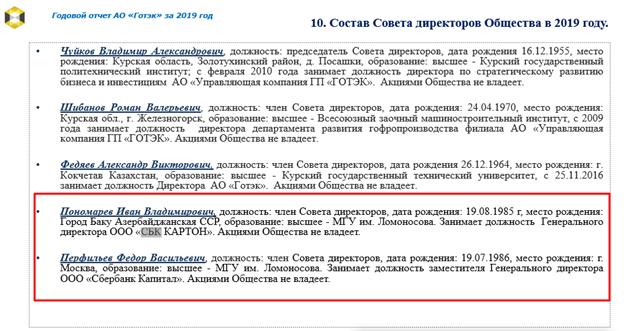 Until recently, SBK Carton owned Sberbank Capital through SBK Project, which is engaged in the collection of distressed assets. It was said that the SBK Carton 23.12.2017  acquired a controlling stake in the authorized capital of the parent company of the Gotek Group of Enterprises.

They deal with real estate issues. From SBK Active, the state-owned company Sevzappravtodor even bought plots for state needs.

They said that SBK Carton immediately took a rather tough position on managing all the affairs of GOTEK. This led to the termination of contracts with a number of buyers and suppliers in court. Instead, the lender imposed its suppliers and buyers on Gotek, under less favorable conditions for the company. Stanislav Bibik, partner of the consulting company Colliers International, suggested that such a reorientation of the GOTEK business under the influence of Sberbank structures was associated with the personal interest of individual bank officials. Ashot Rafailovich Khachaturyants can be included in the number of such officials. "

This gentleman is known as the head of the RPL, who flew out of his post with a scandal after it turned out that he was not in Russia after the start of the SVO, which provoked a lot of problems among Russian football players (they were not allowed to attend European competitions, FIFA made discriminatory decisions against Russian clubs and allowed legionnaires to leave them and so on). Rumors spread that Khachaturyants in London was saving his personal business.

Upon returning to his homeland, he gave the players not only on his own, but also on behalf of the President of the RFU Alexander Dyukov a number of promises that were never fulfilled. This, apparently, was the last straw.

But even before his career in the RPL, Khachaturyants headed the same Sberbank Capital. At Sberbank, Khachaturyants worked from 2008 to 2021. It was under him that what many ill-wishers call the raider seizure of Pavlovskgranit took place. Now the latter is bankrupt, like its former owner Sergei Poymanov, who lost all the courts to Sberbank.

The situation is very similar to what is happening now in Gotek - Sberbank Capital then took the company for debts, having previously entered its capital. And apparently doing there is by no means a recovery of the corporation, but its corral into an even larger debt hole.

In this post, Khachaturyants more than once took part in, roughly speaking, "squeezing" companies even among businessmen who seemed the most reliable - Wek wrote about this. According to journalists, they helped him in this connection with the FSB, including with the head of the Border Service of the FSB of the Russian Federation Vladimir Pronichev. They could get to know each other at the time when Khachaturyants held the post of FTP "State Border of the Russian Federation" of the FSB of Russia.

Sberbank, with the active participation of Ashot Khachaturyants, in 2011 acquired 100% of Ruben Vardanyan's investment company Troika Dialog. In 2019, the latter was suspected of withdrawing $5 billion from Russia through offshore accounts. And although Sberbank refused to participate in what was happening, the facts may be completely different.

According to the authors of the Replica website, allegedly in 2011, in the midst of a deal to buy Troika Dialog by Sberbank, the Panamanian company Airship Universal (potentially associated with Troika Dialogue fraud) paid £100,000 for a Rolls-Royce car to Ashot Khachaturyants. The new year, 2012, Khachaturyants and his family met in the French Alps, staying there in a hotel of the same company cost 60 thousand euros.

Now Khachaturyants owns the Almaz-Fertilizers company (formerly the Hydrometallurgical Plant), which, as they say, was unfriendly absorbed in the interests of Khachaturyants.

In total, we have: one of the largest companies in the packaging industry in Russia risks coming under the full control of Sberbank Capital and sliding into bankruptcy in the future. And its owner Vladimir Chuikov - to remain "extreme," like Sergey Poymanov in "Pavlovskgranit." But, most likely, Messrs. Gref and Khachaturyants will once again enrich themselves.