Kerimov with a billboard

Behind the advertising giant Russ Outdoor may be the family of Senator Suleiman Kerimov, who clearly knows how to receive the necessary preferences in the market.

According to the correspondent of The Moscow Post, the company Omis 92, which is part of Russ Outdoor, won the court for the fourth time against the city hall. As a result, the organization will operate billboards in Moscow until 2026 at old prices approved back in 2011. In addition, Outdoor Structures can take control of almost 10 thousand stopping pavilions of public land transport in the capital. At the same time, one of the beneficiaries of the company, Levan Mirzoyan, was declared bankrupt several years ago. According to some reports, the entire advertising empire may work in the interests of Senator Suleiman Kerimov, whose family, in particular, financed one of the transactions of the Russ Outdoor structure.

It is worth noting that if Russ Outdoor receives rental rights for almost 10 thousand stopping pavilions in Moscow, for all of them he will have to pay a minimum of 272.2 million rubles a year, or over 2.7 billion rubles for the entire duration of the contract.

But it seems that the company simply may not have money for all this.

For starters, let's explain a little: Russ Outdoor is a brand and holding, which now includes Vera Olympus, Lisa, Omis 92, Stinn and Russ Outlet LLC. And now a little about the structure of these companies.

Russ Outlet LLC is owned by two foreign companies: MEDIA SUPPORT SERVICES LIMITED and MERCURY OUTDOOR DISPLAYS LIMITED. Shares of both owners in the pledge with VTB. The general director of the enterprise is Robert Mirzoyan.

OOO Omis 92 owns LLC Vizhenart (a share in the pledge to VTB). She, in turn, CJSC Olympus and LLC Vera-Olympus (both shares are also pledged to VTB). LLC Vera-Olympus also owns the same CJSC Olympus. The last until July 2021 was owned by Alexander Goncharov, Sergey Dymov, Dmitry Dyumin and Irina Antipina. All these persons are considered partners of the brothers Levon and Robert Mirzoyanov. The current beneficiary of CJSC Olympus in Rusprofail is not indicated.

There is no similar information in Rusprofail about Lisa. However, Vedomosti wrote that the organization also recently entered the Russ Outdoor holding.

Until 2017, Stinn LLC was controlled by Robert Mirzoyan himself, now the only owner is Grigory Sadoyan, close to the brothers. And his share in the enterprise is pledged... VTB! 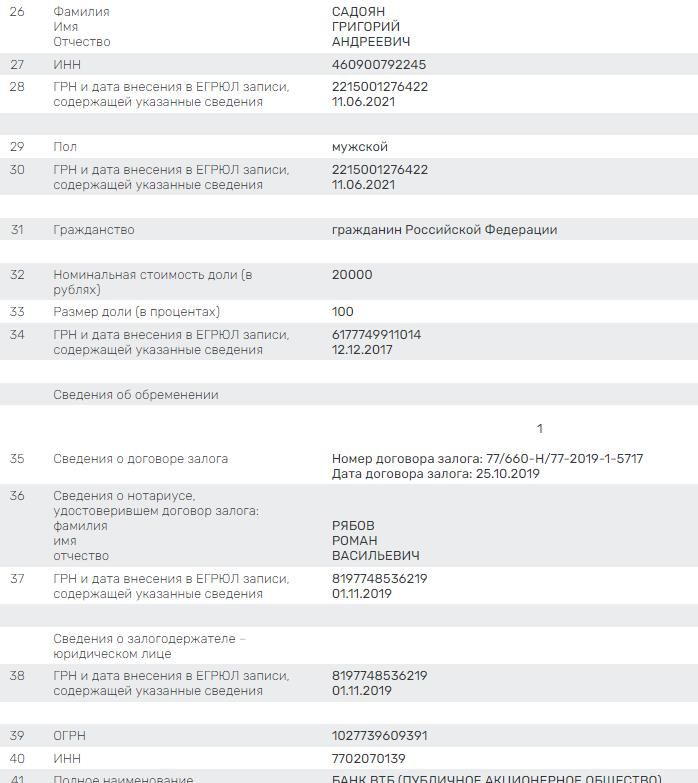 Last year, the French company JCDecaux withdrew from the shareholders of the Russ Outdoor group. A 25% stake owned by foreigners was bought by Stinn LLC, the beneficiaries of which are the Levan brothers and Robert Mirzoyany. The latter at that time also worked as the executive director of Russ Outdoor. Stinn gained control of the holding gradually: first acquired 48.6%. Another 26.4% of Russ Outdoor remained with VTB.

Now Stinna, according to Rusprofail, has zero revenue, and profit is 491 thousand rubles.

A similar situation is observed in the previously mentioned Omis 92, which is owned by Vizhenart LLC. And the share of the latter is also burdened by VTB. What to say, very conveniently invented.

The Mirzoyany brothers at different times controlled several advertising companies, but the main advertising asset of entrepreneurs is considered to be LLC Vera-Olympus. And there, too, everything is not smooth: according to Rusprofail, the losses of the company exceeded 226 thousand rubles.

And here and there

We also add that in 2019 Levan Mirzoyan was declared bankrupt. According to RBC, in June 2016, until February 2018, PJSC M2M Pryvet Bank opened a credit line for 58 million rubles to Mirzoyan. At that time, Mirzoyan was one of the members of the directors of the credit organization.

In December 2016, the license was revoked from the bank and Mirzoyan could not return the money. Earlier, The Moscow Post wrote in detail that M2M belonged to the structures of the Asia-Pacific Bank, owned by Andrei Vdovin. It is possible that Mr. Levon Mirzoyan worked in his interests.

Levan Mirzoyan also appeared in the media as one of the actual beneficiaries of Timber Bank (formerly BTA-Kazan) in recent months before its reorganization in 2014. Shortly before the collapse of the credit institution, Mirzoyan held meetings inside the bank as a head and participated in a meeting at the National Bank of the Republic of Tatarstan as a representative. According to RBC, then Mirzoyan acted in the interests of the former president of Ingushetia, Ruslan Aushev. The bank has documents confirming that the plaintiffs are controlled by these persons due to the fact that they were its customers.

For many, unexpectedly last year, the name of Mirzoyan was lit up in the bankruptcy proceedings of Yamalzolot Konstantin Strukov. Vera-Olympus bought the rights of claim against Yamalzoloto by more than 341 million from the same Asia-Pacific Bank Vdovin. It turns out that Mirzoyan can be in contact with him to this day?

Apparently, Mirzoyan is generally a very friendly person. They connected him not only with Andrei Vdovin and Ruslan Aushev. Apparently, Senator Suleiman Kerimov may be behind Mirzoyan's advertising business.

In favor of this is the fact that last year Russian Railways chose a new contractor to place its outdoor advertising, which became the company CJSC Olympus, the structure of the capital operator Vera-Olympus. According to RBC, it was the family of Suleiman Kerimov who took part in financing the purchase by the Vera-Olympus group of the advertising contractor Russian Railways. The deal was overseen by Said Kerimov, the son of a billionaire. Therefore, could he have his own interest in this?

As The Moscow Post wrote in detail earlier, in this race, Vera-Olympus beat Lisa, which later also entered Russ Outdoor. It was customary to connect Lisa with the scandalous Magomedov brothers, beneficiaries of Summa, now in jail.

And how to not recall that Ziyavudin and Magomed Magomedov had a conflict with Kerimov. In 2017, the senator was arrested in France on suspicion of tax evasion. This happened, allegedly, on the denunciation of the Magomedovs. The subsequent criminal prosecution of the brothers was repeatedly presented as a retaliatory gesture by Kerimov.

What to say, if it really is, then it makes the situation very clear. At least, it is clear why the company, without the necessary finances and with a bankrupt founder, received approval from the FAS in 2019 to buy 48.57% of the operator Russ Outdoor, for which it was supposed to give more than 7.2 billion rubles. Could the Kerimov throw money?

It is possible that Mr. Kerimov can now try to ensure that Russ Outdoor goes into control and those very 10 thousand metropolitan stopping pavilions. And the final beneficiary, presumably, could be the senator and his family.