The owner of the largest furniture centre in Europe named Tri Kita, Sergey Zuev, accused businessman Arsen Kanokov of "squeezing" his business. Meanwhile, as The Moscow Post learned from its own sources, Kanokov intends to buy out the Tsvetnoy department store from oligarchs Suleiman Kerimov and Oleg Deripaska through Bonum Capital, which they recently purchased from VEB.RF.

According to the correspondent of The Moscow Post, the owner of Tri Kita Sergey Zuev announced another "raider seizure" of his business, in which he suspects his former lawyer Igor Romanov. Now, according to the entrepreneur, Romanov is making attempts to sell the furniture centre - including, possibly, to the Sindika GC of the former head of the Kabardino-Balkar Republic Arsen Kanokov. The latter is now actively expanding its trading business in the capital - he is acquiring the Moskvoretsky Market from Mikhail Goryainov's Gremm Group, and, according to our sources, he is also planning to buy Tsvetnoy from Bonum Capital, which is associated with billionaires Kerimov and Deripaska. Moreover, accorrding to spiteful critics, there is a "raider" smell in all these stories. Is that the senator's business style?

The founder of the Tri Kita shopping centre Sergey Zuev served a prison sentence for furniture smuggling and tried to prove to the investigation that the largest furniture centre in Europe was taken away from him with the help of a raider seizure. Last year, the Arbitration Court of the Moscow Region sensationally returned the furniture empire to its founder. However, now Zuev accuses his former lawyer Igor Romanov of the next "raider seizure" of the shopping centre and an attempt to sell it, Bloknot writes.

According to the spiteful critics, at one time Zuev went for 8 years to places not so remote thanks to Mr. Romanov. The latter at some point took possession of almost all of Zuev's property, so that his detention could be quite in the interests of the lawyer. Moreover, at the beginning of this year, the owner of the Tri Kita was tried to be arrested in the case of arbitrariness, as Kommersant wrote. Is it possible that Romanov ears can also be involved in this story?

The so-called "raider capture" of Tri Kita, if it takes place, can be carried out in the interests of Arsen Kanokov. His Sindika owns many shopping centres, eight hotels and 30 markets in different regions of Russia. Zuev has already sent an open letter to the representatives of the Sindika GC, in which he warns that Lamax LLC, to which the furniture centre is registered, was stolen from him and asks "not to take any actions to acquire the property" of the company. 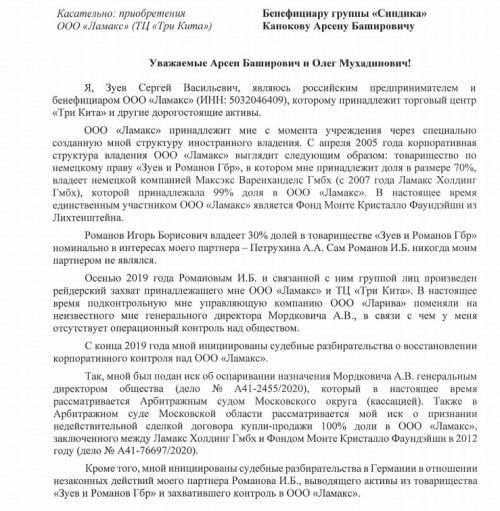 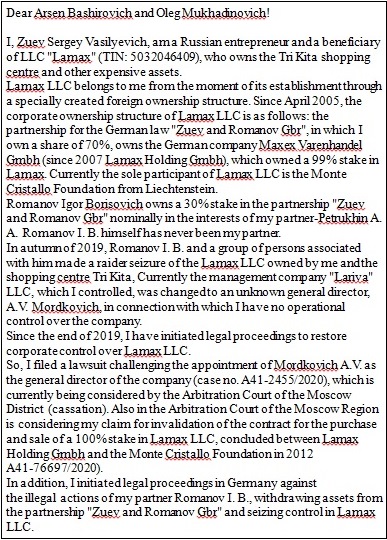 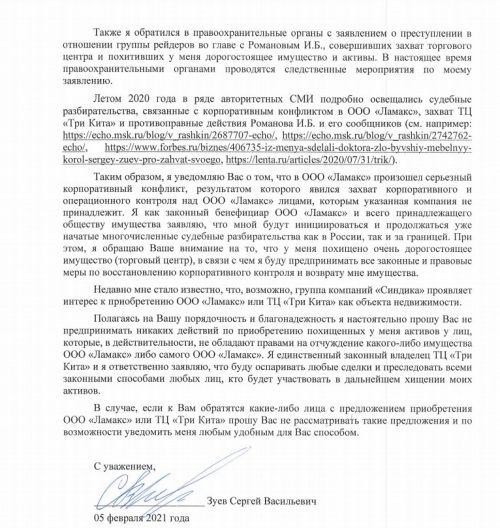 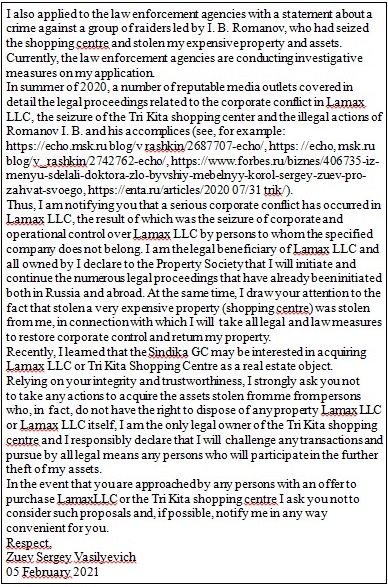 Made an agreement with Deripaska and Kerimov?

However, rumour-mongers believe that Kanokov, who is probably interested in Tri Kita, is unlikely to hear Zuev - now he is expanding into the commercial business of the capital.

Investment group Bonum Capital and Rose Group, the structure of the VEB.RF, on February 5, closed a deal on the assignment of ownership rights to the Tsvetnoy department store. Bonum Capital is associated with Suleiman Kerimov. As RBC wrote, there was also confirmation of the group's connection with Deripaska. It turned out. that the interests of Bonum Capital and the oligarch intersected: in 2017, the investment company bought a troubled asset from the billionaire - potential financial claims against the "aluminum king" of the 1990s, Mikhail Cherny, for hundreds of millions of dollars, which he could receive from the former director of Kuzbassrazrezugol, Alexander Gliklad.

However, why do Deripaska and Kerimov, who are behind Bonum Capital, need a department store in Moscow? After all, the trading business, in fact, is not included in the sphere of interests of any of them. The answer may be simple: in fact, Tsvetnoy was acquired in the interests of Kanokov. After all, Kerimov has a reputation in the market as a merchant who likes to resell assets.

However, at one time, there was a story with a "raider" smell with Tsvetnoy as well. Do only such ones surround Mr. Konakov? 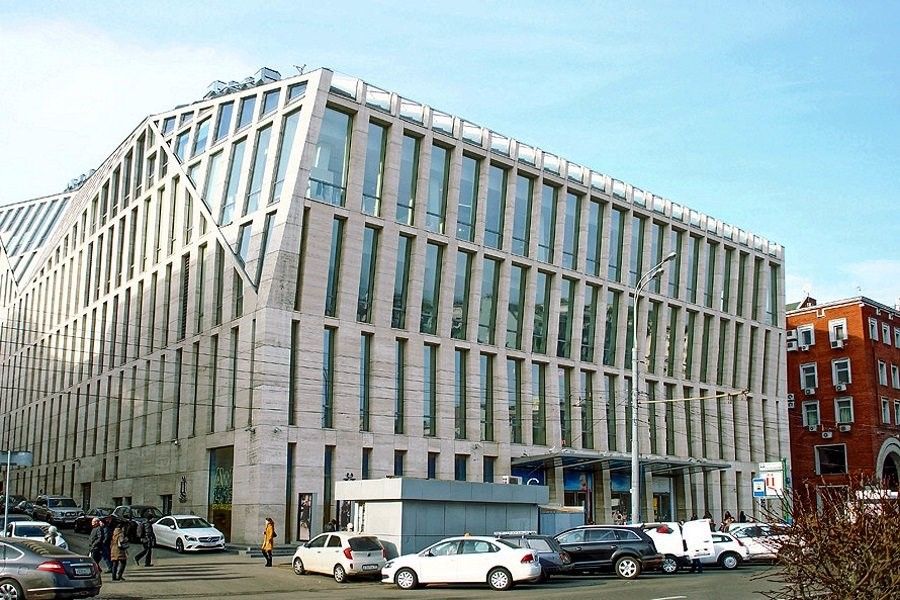 The fact is that the department store was once built by the developer Rose Group, whose main shareholder at that time was Boris Kuzinets. However, in 2013, Kuzinets had to to sell the company to VEB.RF structures - it was rumoured that this was not an entirely friendly takeover. Later, Rose Group, which is already on the balance sheet of the state bank, got into a scandalous story with Stanislav Gromov because of the project to build an elite residential complex Khilkov in the capital. Detractors then spoke almost about the "capture" by the structure of VEB.RF. Previously, The Moscow Post wrote about this story in detail.

With Igor Shuvalov coming to the state Bank, there began a massive sell non-core assets, among which was Tsvetnoy. VEB.RF seriously expected to get 10-11 billion rubles for the department store, but suddenly Sberbank "knocked". It turned out that the former owners of the Rose Group at one time took a solid loan in the latter and at that time they owed about $130 million.

As a result, Sberbank confirmed plans to sell the rights of claim to Tsvetnoy, which is in its pledge, and organized an auction. It was then that Bonum Capital entered the "arena", which bought out loan obligations from the state bank for 4.2 billion rubles. And then the investment group initiated negotiations to buy out ownership of the entire building and operating business from the Rose Group.

But what if the whole thing was in Kanokov's best interests? And here it is worth remembering that he recently became the owner of another large trading asset. Sindica Holding has invested 1.8 billion rubles in the purchase of the Moskvoretsky market in the south of Moscow from Gremm Group of Mikhail Goryainov.

It is noteworthy that until recently, Mr. Goryainov denied that he was selling the asset to Sindika. There were rumours that the businessman "delayed" the sale in order to have time to squeeze more out of the Moskvoretsky market, which was already his most unprofitable asset. Perhaps the deal was also hindered by Goryainov's corporate conflict with the ex-owner of Pyaterochka, Andrey Rogachev, with whom they agreed to develop a network of markets. However, as Rogachev later stated, they purchased 5 objects, but for the last two he did not receive payment from the owner of Gremm Group. The debt was estimated at $15 million. As a result, the case went to the High Court in London, as RBC wrote.

All this looks as if the former head of the KBR has seriously taken up the expansion of his "empire", so we will explain his interest in both Tri Kita and Tsvetnoy. Moreover, it seems that Mr. Kanokov is attracted only by difficult business stories. Does he feel comfortable in scandals?

Sindika went to his daughter

Mr. Kanokov, as mentioned earlier, is a notable player in the market: Forbes estimated his personal fortune at $500 million in 2020. It is rumoured that he managed to "make his fortune" while from 2005 to 2013 he was the head of the KBR - they say, he "rose" in the markets of the republic.

Moreover, his exodus from Kabardino-Balkar Republic was accompanied by a scandal: in 2012, the Russian Interior Ministry conducted a large-scale on-site special operation, during which the head of the administration of the head of the republic, the Minister for State Property Management and Land Resources and his former deputy, as well as a well-known businesswoman in the republic, were detained and transferred to the capital. It turned out that three of those arrested were Kanokov's relatives, Lenta reported. 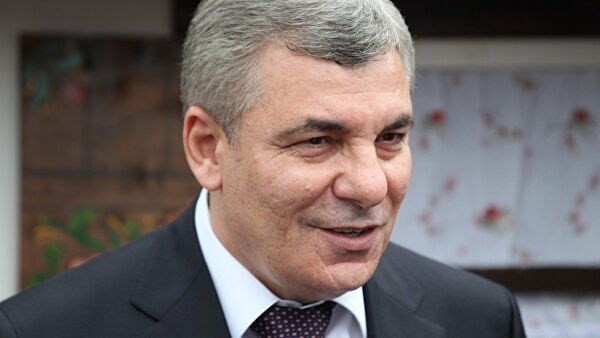 In 2011, detractors began to talk about the fact that Kanokov could be engaged almost in the financing of gangs in the republic. According to blogger Andrey Severozapadny in his LiveJournal, allegedly in 2006, The Federal Financial Monitoring Service checked organizations that could do this, and found out that the president of the KBR, as well as his entourage, was behind them.

Rumours were also spread that among the secret business partners of Kanokov, authorities Alisag Shogentsukov, nicknamed Alikos, and Albert Nazranov, with the pseudonym Negr, were noticed. In 2013, the latter was killed, which could be the reason for Kanokov's departure from the leadership post. Earlier, The Moscow Post wrote in detail about this story.

By the way, Arsen Kanokov recently managed to rewrite his entire business to his daughter Madina, and she also got the main enterprise of Sindika. All this suggests that in this way the senator may be trying to hide the "ends", taking into account that now accusations of a probably unfriendly takeover from Mr. Zuev are flying in his direction.

It seems that stories with a "raider" smell and even echoes of truly criminal stories are noticeable everywhere around Mr. Kanokov. Isn’t he afraid that his expansion into the capital's commercial market will attract attention of the security forces? In this case, it is understandable why he suddenly decided to present Sindika to his daughter. Does it mean that Kanokov is out of business?