Alex Sekler, a businessman who went abroad in his time, was not heard of for a long time. But now the merchant with irrepressible eagerness "merges" the capital's assets. Why does he need money so harshly?

It is not known for sure why Russia did not please Sekler, whether the climate was not right, or the native justice was too severe. Now the merchant is trying to sell his land on the Berezhkovskaya embankment in Moscow through his company "Liral". "Golden" 28 hectares of capital lands within the Third transport ring promise a big jackpot. It is suspected that this activity is due to the fact that former patrons of the security forces have retired. A correspondent of The Moscow Post investigated  the past and present of the foreign gentleman.

It is not known exactly how much the land may be sold for. Quite profitable companies such as: Sergey Gordeev's PIK group, Roman Timokhin and Viktor Labuzdko's MR Group, Roman Abramovich's Millhouse and Lev Levayev's AFI Development are among the contenders. Sekler obviously doesn't like to trifle.

This can be concluded from a suspicious story. According to FLB back in 1995, Sekler, registered a joint venture with the Moscow plant "RTI Kauchuk" through its foreign "Liral" - "Kauchuk Plast", they agreed to contribute equal shares into the authorized capital of the latter (which is about 16 million dollars).

Sekler was engaged in purchasing equipment abroad (lines and nodes), as he had already had experience working with foreign partners. As FLB wrote, all payments were made from the accounts of RTI under the contract, even before the registration of "Kauchuk Plast", so the German company "UNICOR GmbH Ranplastmashinen" was transferred 4.5 million marks on the Sekler's firm instructions. But when two lines came to the plant, it turned out that the value of the equipment (one line) on the paper was 1.2 million marks, this is also reported by FLB. Certainly, the company's employees sent a request to Germany, where they received the answer that the price of two lines was actually 2.4 million marks, the rest of the money, as FLB wrote, was sent further by the decision of "Liral" (that is, by the decision of Sekler). It is unknown where exactly.

But that is not all. Alex Sekler had an interesting company - Implementation base of bakery products No 1 ("Realbaza"), and according to FLB, the businessman pulled another "muddy" scheme with it: the first line was delivered to the plant without problems, but the second one was transferred to "Kauchuk Plast" only on paper, but in fact it was detained and issued to "Realbaza" under a storage agreement. Later, as FLB wrote, the line "got the boot" in Germany, and then again imported into Russia and transferred to NPO "Plastic", where Sekler had a block of shares too.

That is, the businessman, according to FLB data, paid with the money of "Kauchuk" (also inflating the price several times) for the supply of equipment to his NPO "Plastic". It is unlikely that such a scheme passed without falsifying documents. This is also the opinion of employees of the plant, who even wrote to the President with a request to influence Sekler, who was making the company bankrupt. This was also reported by FLB.

The most curious thing is that the businessman did not hesitate to file a lawsuit against "Kauchuk" with a demand to return him 3 million dollars, after parting with the company, however, he turned all the lawsuits through... the London Commercial Court, these facts were published by FLB. Of course, foreign lawyers felt that Sekler was worthy of payment. Did the unsinkable businessman decide to "knock out" more coins of lost profit?

Besides, Sekler allegedly acted within the law, because the contract, according to FLB, was spelled out that all conflicts (including the division of property) should be resolved through foreign arbitration. Most likely, the scheme "spun" not without the help of the former Director of RTI Viktor Chopov, who after the deceit of "Lirali" and the enterprise, suddenly took a one-way ticket... to America, as FLB  wrote.

The decision of foreign lawyers was sent to the Presidium of the  Supreme Arbitration Court of Russian Federation for a new review. But Sekler still tried to "push" his decision and even sent open letters to the Chairman of the Supreme Arbitration Court, Veniamin Yakovlev. The newspaper "Trud" wrote about it. Sekler also referred to the opinions of international law experts and leading Russian lawyers, saying that the case can only be considered in a foreign country. However, it was seemed to be an ordinary manipulation. 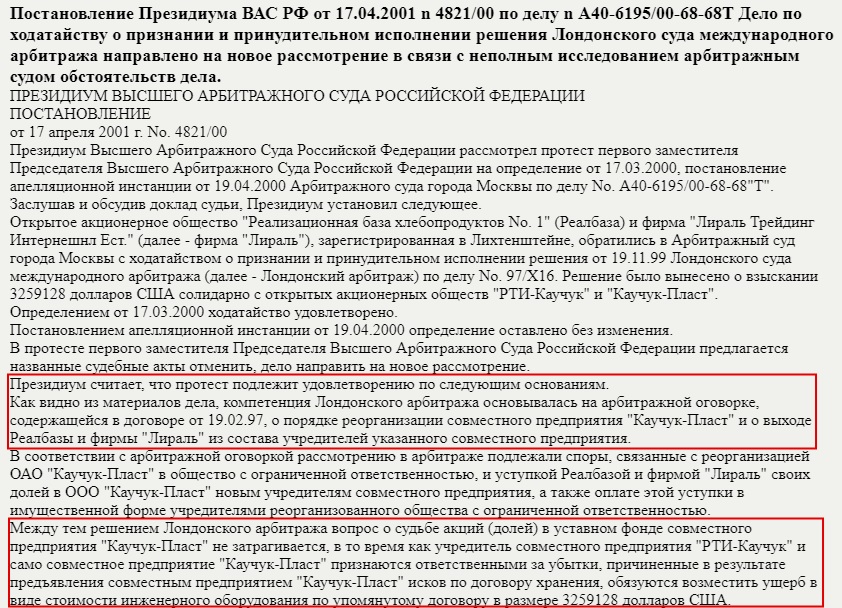 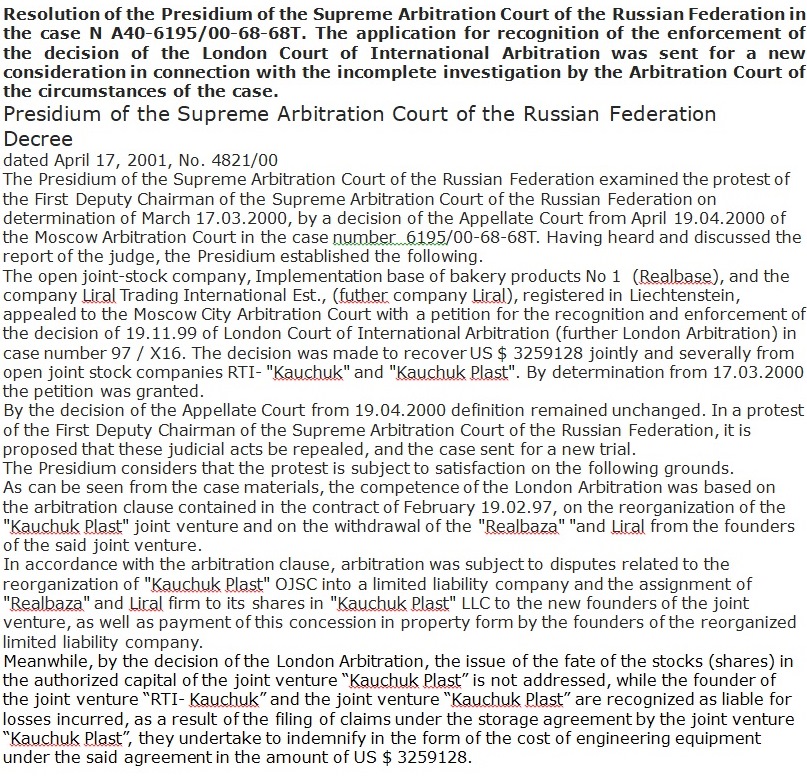 Doesn't Seckler care what ways to "beat out" money?

Moreover, according to FLB, by the decree of Sekler, billboards with the text "Yakovlev and Yukov. Surrender to justice. Realbaza number 1" appeared on Manezhnaya square. Thus, did Sekler decide to act aggressively and openly against the Chairman and his first Deputy Mikhail Yukov? It is unlikely that such an "action" cost little. Doesn't Sekler feel sorry for millions on behalf of a "good deal"?

But it remains to find out who will give up. As a result, "RTI-Kauchuk" sold the property complex of the plant to friendly "Metalloinvest" in 2002, to which Sekler also reacted, considering the auction to be illegal, as "Kommersant" wrote. The asset "burst" in 2014. 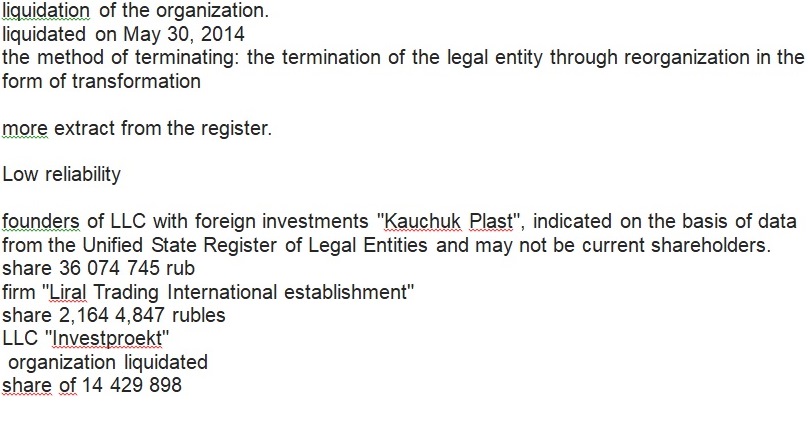 And here is an amazing coincidence. It was in 2014 that the former head of the 1st Department of the IC at the Ministry of Interior of the Russian Federation, Yuri Alekseev, retired. Moreover, according to "Interfax", the security officer "was asked" because of claims to the organization of the investigation.

A blogger on the portal "Russian criminal" claimed about the connection of the former security officer and Sekler. Allegedly, Alekseyev helped a foreign friend. They say that when in 2003-2004 Sekler believed that a former business partner (and part-time friend of the oligarch Boris Berezovsky) Anatoly Blinov "threw" him and several structures, including the Bank "Image" and the NPO "Plastic", Blinov allegedly immediately was opened a criminal case, which was taken by Alexeev, although the process was conducted by another investigator. As a result, Blinov, according to rumors, appeared in jail.

Of course, there is no desire to believe such gossip. But what if something is true? Maybe "friends" from law enforcement agencies helped to "push" RTI? After the resignation of Alekseyev, Sekler's courage has diminished. Is it why he sells off native assets? And if we  evaluate the businessman's biography and recall that the capital's land was given to him in the early 2000s, as "Kommersant" wrote, we can assume in what ways and with whose help it was done.

By the way, the businessman can also be reminded of the scandals of "Renta Bank", in which the foreign partner was the only founder. For example, in 2016, according to "Kommersant", the security forces took a criminal group led by the Chairman of the Board Lyudmila Lepko. The process lasted as long as six years! According to the investigation, employees "withdrew" about 70 million rubles on fake documents to affiliated companies! Had the money gone to Sekler's foreign accounts?

In 2017, Lepko, as the author of "Banki.ru",was allegedly sent to a colony for 3.5 years. Her accomplices received from two to three years. Maybe that's why Alex Sekler doesn't "shine" in the information space? Is he afraid that the cameras with their crude stools will pour out evidence? Especially, if we look at the bank's indicators, questions arise. Is money still being withdrawn? 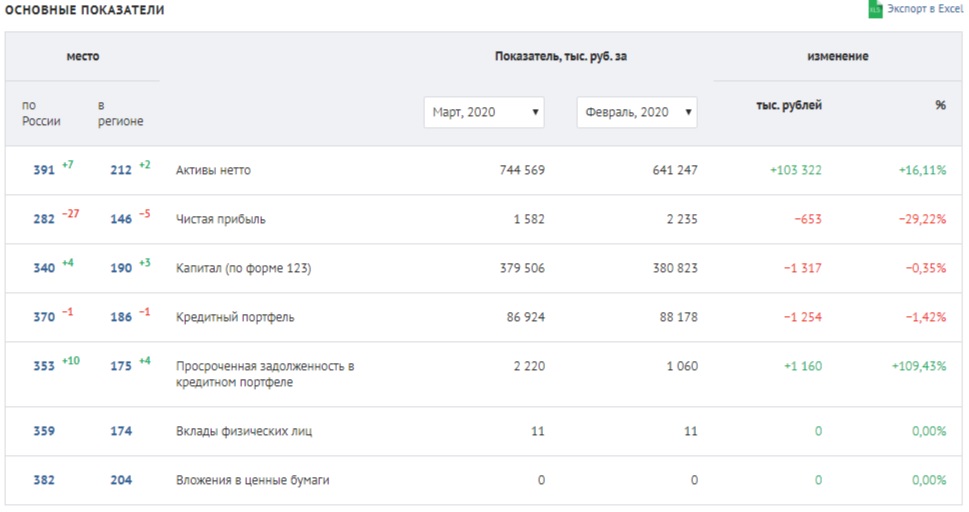 Amazing luck accompanies Sekler! It is unknown where the native money of the rubber company went, tens of millions "evaporated" from the "Rent-Bank" and can still be "withdrawn", and the businessman continues to conduct business! Isn't it time to remind an overseas merchant what native justice is?