Is Deripaska sharpening the "hatchet"?

Oligarch Oleg Deripaska "pushed" the payment of huge dividends by Nornickel again, which was opposed by another shareholder, Vladimir Potanin. Is Deripaska depriving his partner of money in order to "capture" an asset?

According to The Moscow Post correspondent, MMC (Mining and Metalurgical Company) Norilsk Nickel may pay $ 1.2 billion in final dividends for 2019, or 557.2 rubles per stock. Vladimir Potanin proposed to reduce payments for the past year in order to create reserves. But "Rusal" which belongs to Oleg Deripaska did not agree to this. Does the oligarch want to leave the main shareholder Vladimir Potanin without money to get carte blanche to control Norilsk Nickel?

Dividends of Norilsk Nickel for the year 2019 in total can amount to 4.8 billion dollars with the final payment. In total, the company allocates 60% of EBITDA to dividends. The amount of dividends was recommended by the company's Board of Directors.

At the same time, against the background of coronavirus, metals are reduced in price. In connection with the crisis, Vladimir Potanin suggested that the company's shareholders postpone the payment of dividends in 2020 to a later date - until the situation resolves. This would leave a part of the profit in reserve.

However, Deripaska is determined. Apparently, he does not need these reserves - he is trying to "pull" more funds from the MMC. The oligarch wants to direct money to his personal projects, and Potanin will then have to spend his share on supporting Nornickel.

The confrontation between the shareholders of MMC has been growing lately. Are we watching a new series of "Nickel Wars"?

Recently it became known that one of the world's largest projects for the extraction of platinum group metals Arctic Palladium was under threat. The joint venture of Musa Bazhaev's Russian Platinum and MMC Norilsk Nickel has collapsed. Oleg Deripaska stood "across" again.

Earlier, it was planned that Nornickel would enter licenses for the development of the Maslovskoye field into the joint venture, and Musa Bazhaev's company — for the Chernogorsky field and the southern part of the Norilsk-1 field. Potanin has been "fighting" for 6 years for the latter one.

He unsuccessfully tried to challenge the decision of Rosnedra, which recognized Russian Platinum as the winner. The latter stated in court that Nornickel literally does not give it access to the infrastructure.

Then the Presidential Executive Office had to intervene in the dispute, which eventually sided with Bazhaev. Was Deripaska standing aside and rubbing his hands all that time?

And now, when the issue seems to be already resolved, Rusal has blocked the project. It is worth noting, that Bazhaev is unlikely to be able to develop these fields by himself, and therefore it is not excluded that Deripaska plans to get the assets of Russian Platinum at a cheap price, which will become an additional argument in the dispute over shares of Nornickel with Vladimir Potanin.

In other words, the owner of Rusal seems to have simply decided to "push out" Potanin of Nornickel. Therefore, it is not surprising that Deripaska now insists on increasing dividend payments, rather than creating a reserve. Has the oligarch decided to leave Potanin without money, so that he has nothing to do in return?

The confrontation between the two shareholders has been going on since 2008, when Oleg Deripaska bought a share in Nornickel from Mikhail Prokhorov. Since that time, there have been "three wars" between the businessmen.

From the very beginning, Vladimir Potanin and Oleg Deripaska had different views on the company's activity: the former defended large-scale investments, while the latter stood for dividends for their projects. In other words, the dividend policy has repeatedly become a stumbling block.

In 2012, it seemed that the conflict subsided when Roman Abramovich became a minority owner of Nornickel. However, in 2018, the businessman decided to sell 4% of the 6.2 % stocks.

It even came to the" Russian roulette " – a mechanism in which shareholders could sell their block of shares to each other, offering a higher price. The conflict was resolved in court.

The London Court sided with Oleg Deripaska, forbidding Abramovich to sell his block of shares. And at the beginning of the month, it became known that the litigation of shareholders of MMC Norilsk Nickel was completely suspended. Structures of Vladimir Potanin and Roman Abramovich decided to refuse the opportunity to appeal the decision of the London Court in the dispute with Rusal concerning the sale of MMC Norilsk Nickel's stocks.

Experts supposed that this decision will mitigate the impact of the conflict of MMC shareholders on corporate governance. However, the appeal was withdrawn at the end of last year – since then, the shareholders of Nornickel have repeatedly demonstrated the presence of conflict relations. 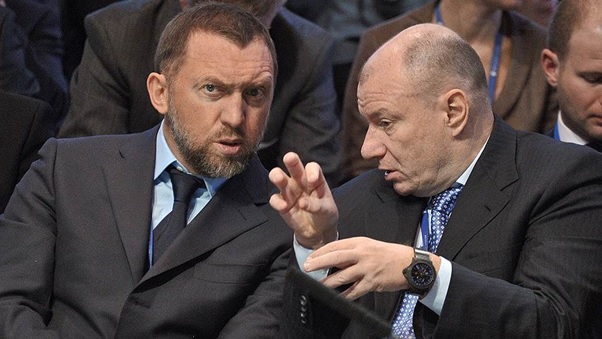 Last year, news broke that Oleg Deripaska's ex-wife Polina Yumasheva and her father Valentin Yumashev were looking for purchasers for their shares and the shares of Yumasheva and Deripaska's common children in En+ Energy and Metallurgical Holding. Then it was rumoured that the asset was targeted by Vladimir Potanin.

Yumasheva promptly denied all the rumors, though it immediately became clear: someone was trying to shake Deripaska's position.

It seems that even the top managers of Nornickel do not have enough patience because of the endless scandals. Last month, three senior vice presidents of MMC left their positions at once. Moreover, such personnel changes might be an alarming "bell" for Vladimir Potanin - it is his people who are leaving. Is Oleg Deripaska exulting again?

Two years ago there was a story of Elena Bezdenezhnykh, a vice-president of Nornickel, who had been working for the company for 20 years before she moved to a similar position at Rusal. As the Daily Storm newspaper wrote, she could be involved in the disappearance of 2 billion rubles from the MMC. Does Deripaska know how to make tempting offers to the people he needs? May she be related to the current departure of employees from the company?

In 2018, Oleg Deripaska's assets in the United States were sanctioned. As a result, the businessman was forced to reduce the share in his company below 50%. After that, the US authorities lifted sanctions against En+ and its controlled UC Rusal and Eurosibenergo. But the oligarch himself remained under sanctions, which he is trying to challenge in court to this day, but so far unsuccessfully.

As a bonus to all the misery, the coronavirus pandemic has descended, because of which En+ risks not paying dividends for the past year. It did not pay them a year earlier. In 2017, the volume of payments amounted to 394 million dollars. Does it mean that Deripaska simply has no place to get money from?

In February, it became known that En+ holding had pledged securities on a loan of 110 billion rubles. Deripaska needed this money to buy back stocks from VTB. Before that, the Data Processing Centre company of Oleg Deripaska's holding acquired 21.37% of the holding from VTB for 1.59 billion dollars.

To pay off this loan, the oligarch can pledge one of his assets again. However, this scheme painfully reminds what knowledgeable people call a financial pyramid.

It seems that now Oleg Deripaska has to to get out by any means, and therefore there is a feeling that the fourth "war" for the assets of Nornickel may not be far off. Or it is alreadytaking place now.

No wonder that Deripaska defends the payment of dividends by Nornickel so strongly. Does the oligarch need funds for his own projects? Does he need to "remove" Vladimir Potanin from the MMC for this reason? It becomes increasingly difficult for the latter to resist.