How the Zakharyaevs "build" capital, or brotherhood "to the end" and Nisanov

Can money be withdrawn from the companies of Isay Zakharyaev, what should the real estate investors who were "lucky" to buy apartments from his Cezar Group do, and what does oligarch God Nisanov have to do with it?

As the correspondent of The Moscow Post, rumours about the imminent bankruptcy of the development group of companies called Cezar Group appeared on the network. Despite the fact that this does not seem to indicate the financial condition of the group, the latest news on the company's website refers as far back as June 10, 2020. It says that the company began finishing works in the Dynasty residential complex in the Khoroshevsky district of Moscow.

This residential complex is known, first of all, for delays in the delivery of apartments and a loud scandal with utility tariffs, which can be imposed by a company that is slipped to shareholders by the developer himself. We will talk about this later, but it is important to understand who is behind this structure.

And it is Isay Zakharyaev, who is behind it - brother of Herman Zakharyaev, son-in-law of God Nisanov, an odious billionaire-developer, owner of the Kievskaya Ploshchad Group of Companies and many covered markets in the capital, which were visited by security forces last year. It was written about by  Versia.

"Raid" on a construction site

Detractors call the Zakharyaev brothers almost left and right hand of God Nisanov. The most notorious scandal is related to the business of developer Ilgar Hajiyev, SDI Group. The latter had a number of projects with structures related to God Nisanov. As a result, Hajiyev was left without projects and without business. Hajiyev claims that God Nisanov seized his business, and the real estate investors of their project of the Pirogovskaya Riviera residential complex in Moscow were left in unclear position - both without money and housing.

As a result, Ilgar Hajiyev was forced to leave the country, as he claims, because of the threat to his life. How Isay Zakaryaev connected to this?

The fact is that Hajiyev and relatives of God Nisanov started the project all together - in 2012. But already in 2015, the partners differed in their views on the construction process, as a result of which Hajiyev for some time handed over the affairs to the Zakharyaevs (there are six brothers in total). As a result, according to Hajiyev, the brothers were not able to pass the first stage of the residential complex in time.

The conflict was extinguished, and for some time Hajiyev even entered into another project, in which the Zakharyevs were to participate - the Akkord residential complex, and then the VernadSky residential complex. Allegedly, Isay and the other Zakharyaev brothers could have been God Nisanov's proxies for overseeing these projects, while other Nisanov people could have participated in them directly with capital.

In any case, Ilgar Hajiyev later claimed that due to a number of problems and tensions in the relations of partners, God Nisanov could have provoked a banal raider takeover of SDI Group. Allegedly, the company's office was visited by thugs, and Isay Zakharyaev could probably be among them. Later, a video appeared on the network showing people similar to Isay and Herman Zakharyaev hosting the office of SDI Group.

People, similar to the Zakharyaev brothers, "dealing" with the business of Ilgar Hajiyev?

Law enforcement agencies should have verified the authenticity of this video and the circumstances under which it was taken. But there was no reaction from the Ministry of Internal Affairs, despite numerous appeals, including requests from real estate investors of the same Pirogovskaya Riviera.

This scandal has been going on for a long time, and the end is not yet in sight. Moreover, the Komfortinvest company, which was the developer of the Pirogovskaya Riviera residential complex, being out of the control of Ilgar Hajiyev, may soon be bankrupt. This will completely close all prospects of people getting their money back. Ends in water?

Pirogovskaya Riviera is not the only scandal associated with Isay Zakharyaev. Now he owns 70% of the Cezar Group, and almost all objects have serious questions. We decided to take a closer look at the business itself, and found a lot of amazing things there.

The financial situation of the structure, judging by the data of the Rusprofile service, makes it doubtful that it generally conducts development activities. Judge for yourself - 10 thousand of the authorized capital with a single employee. At the end of 2019, the structure earned only 5.5 million rubles with zero asset value. It looks more like some kind of sole proprietor, and not a structure that could be tied to such large projects as the Dynasty RC, VernadSky and  Rasskazovo RC.

In the case of the last project - the Rasskazovo residential complex, the scandal is being continued. The project has been implemented since 2013. Initially, on the territory of 34 hectares, it was planned to build 9 apartment buildings with a height of no more than 11 floors. The Rasskazovo residential complex was positioned as a comfort-class housing. The price of the contract for the purchase of an apartment included developed infrastructure, including a well-maintained park.

However, according to ULGRAD.RU news agency, four years after the start of construction, when the first real estate investors have already started to move into their apartments, the developer unilaterally changed the project of building the neighborhood. The Moscow authorities believed the developer concerning all the matters.

The developer, having sold apartments in the first houses at considerable prices, instead of the planned green zone, decided to build 3 more apartment buildings – "wells" with a height of 22 floors.

That is, Cezar Group, which calls itself "a developer with an impeccable reputation", grossly violated the legitimate interests of its consumers. And it is not at all surprising that the authorities of the capital did not raise questions. Moscow Mayor Sergei Sobyanin is rumoured to have a special relationship with God Nisanov. Whether it's true or not, but the situation with Rasskazovo can be seen. 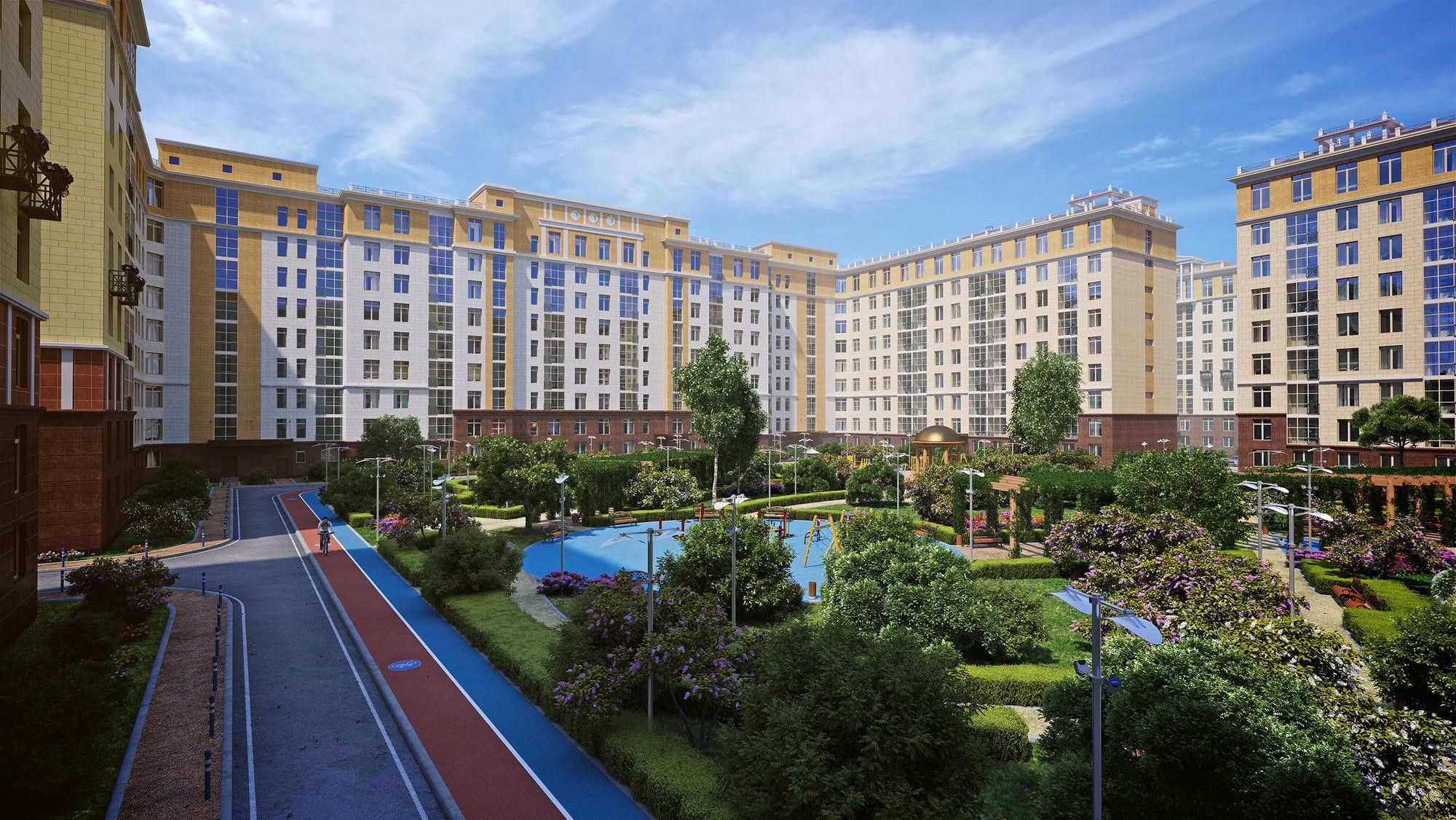 The Dynasty residential complex on the project looked great. But something went wrong…

The scandal broke out in 2018, when the real estate investors realized that everything was not as they initially assumed. The situation with the infrastructure in the residential complex was unpleasant too, and from the City Hall they were given only formal replies. As a result, they had to file a class action in court - the situation has not been settled yet.

Even more problems arose because of the high-rise buildings. It turned out that the construction was not coordinated either in terms of height or noise insulation, so the nearby Vnukovo airport issued a corresponding letter to the real estate investors. According to the calculations of the airport experts, it is strictly prohibited to conduct construction on a certain part of the Rasskazovo residential complex. Does it mean that Isay Zakharyaev, under the "cover" of his brother Herman, Nisanov's son-in-law, could simply deceive people? But the money for the apartments has already been received.

Returning to where we started - the Dynasty residential complex is still in unclear position. The developer there is an affiliated structure of Monolitnoye Domostroenie LLC. True, construction is still going on there - but at what cost? According to the authors of the Stroykontrol website, the delay in delivery is allegedly 2 quarters. The same is allegedly the average delay in construction on other projects - 8 months.

The Prosecutor General's Office, however, has different information. It carried out an unscheduled inspection at the facility, during which the delay from the schedule was recorded at the level of more than 13 months. The results of the audit can be found on the agency's website.

And where did the funds of the real estate investors go, if the houses were never handed over? Can there be inappropriate spending of funds of the real estate investors? If this suddenly turns out to be the case, then it already smells of a serious criminal offense. By results of check: standard target use of H2 does not meet the requirements of paragraph 3 of the Decree of the RF Government from 31.04.2006 No. 233. Does Zakharyaev realize it, or does he hope that God Nisanov will "protect" him?

These are not all the problems of the Dynasty residential complex. Little luck to those whose homes managed to pass on time. According to the authors of the Nash Sever website, allegedly residents of the residential complex complain about the fabulous utility bills that are forced to pay to the "management" of Premier-Comfort LLC.

Taking intoaccount the rumours about the possible bankruptcy of Cezar Group, the question arises whether it will not be fictitious if they are confirmed? Such thoughts are suggested not only by the financial indicators of the company itself, which we mentioned above, but also by the state of affairs in other related structures.

It can be started with the same Monolitnoye Domostroenie LLC, which, with multi-million revenue, has been working "in the negative" for years. In 2019, with revenue of 583 million rubles, its profit was "minus" 221 million. A similar picture was observed in 2018: revenue was 408 million, loss was 423 million rubles.

The "head" structure of Monolitnoye Domostroenie is the Comfort company, 70% of which belongs to Telman Zakharyaev (one of the six brothers). Here, too, we can observe zero revenue, negative asset values and solid losses, amounting to 7.2 million rubles last year. At the same time, all the shares of Comfort are pledged to Sberbank. 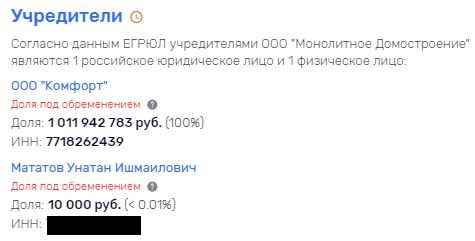 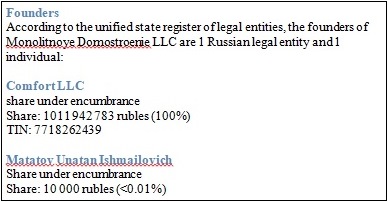 Returning directly to Isay Zakharyaev, there is also Cezar-Invest LLC under his control - also a losing enterprise. Its revenue and value of assets are zero; the loss in 2019 is 133 thousand rubles, in 2018 - 503 thousand.

Another structure under Zakharyaev’s control is Istochnik LLC. Last year, with revenue of 92 million rubles, the company's losses amounted to 119 million rubles. A year earlier, revenue was declared in the amount of 40 million, losses - 217 million rubles.

What is happening in these companies is completely unclear. It would be possible to assume that the financial statements are simply drawn there, and money could be withdrawn from the structures. But nobody wants to check this version for some reason — there can be questions to Zakharyaev’s companies from real estate investors  and partners only, but not from law enforcement agencies and tax authorities.

It can be assumed that such questions will never appear while the Zakharyaevs have ties with God Nisanov. The Zakharyevs themselves might be ordinary entrepreneurs, but Nisanov is one of Russia's most famous and powerful billionaires. Thus, maybe it is God Nisanov who should be asked the questions about whether Cezar Group will be bankrupt and what are real estate investors, who were lucky enough to buy apartments from the developer, to do?