How Michelson "chemically" under Sechin

The merger of Tatarstan TAIF with SIBUR Leonid Mikhelson will lead to a large-scale redistribution of the republican economy and may play against the interests of the head of Rosneft Igor Sechin.

According to the correspondent of The Moscow Post in Tatarstan, the Federal Antimonopoly Service granted the petition of the petrochemical holding SIBUR, whose largest shareholder is Leonid Mikhelson, and allowed to acquire 100% of the voting shares of Tatarstan TAIF.

As stated on the website of the control and supervisory authority, by the end of 2021, SIBUR should submit to the FAS a draft trade policy on goods occupying more than 50% of the domestic market.

In addition, trade policy should include provisions on the protection of the rights of potential counterparties, that is, the combined structure will not have to give preference to its affiliated structures, not establish discriminatory conditions in relation to other companies.

It is here, according to experts, that the main threat is laid - few people believe that the current owners of TAIF and SIBUR Mikhelson will act honestly and transparently in the market. After all, the association will create a real giant in the market, which will take over 70% of Russia's petrochemistry - in fact, it will be able to dictate its conditions.

At the same time, the main benefit from the association, as the parties to the transaction try to present it, namely, a decrease in petrochemicals prices, nationwide, may turn out to be an "air lock." When did monopolization lead to lower prices?

As part of the association, a company will be created on the basis of SIBUR Holding PJSC, in which the current shareholders of TAIF JSC will receive a 15% stake in exchange for the transfer of a controlling stake in the group consisting of petrochemical and energy enterprises. The remaining stake in TAIF JSC may subsequently be purchased by the combined company. "

A separate interest is the ownership structure of the parties to the transaction. If there is certainty with SIBUR, then with TAIF everything is a little more complicated. The main owners of SIBUR are Leonid Mikhelson (35.98% of the shares), Gennady Timchenko (17%), the current and former management of the company (about 14.5%), the SOGAZ group (12.5%), Chinese Sinopec (10%) and the Silk Road Fund (10%).

The structure of the owners of TAIF (Tatar-American Investments and Finance) remained unclear for a long time. But in 2014, during a legal dispute between the company and the tax, it became known (at that time). It turned out that 28% of the company's shares belonged to the chairman of the TAIF board of directors Albert Shigabutdinov and his family, the same number to his deputy Rustem Sulteev.

Another 23% collectively belonged to the sons of the former President of Tatarstan Mintimer Shaimiev Radik and Airat, as well as his granddaughter Kamila (2%). TAIF top managers Guzelia Safina and Vladimir Presnyakov each had 4.5%, 10% - to other minority shareholders.

Now, as "Kommersant" writes, the shares of Radik and Ayrat Shaimiev have increased, and Messrs. Shigabutdinov and Sulteev have decreased, and now these four shareholders are approximately equal.

Meanwhile, ill-wishers connected, and continue to connect the success of TAIF in the market with the personality of the ex-president of Tatarstan Mintimer Shaimiev. He, along with his sons, is called the main beneficiary of the company. 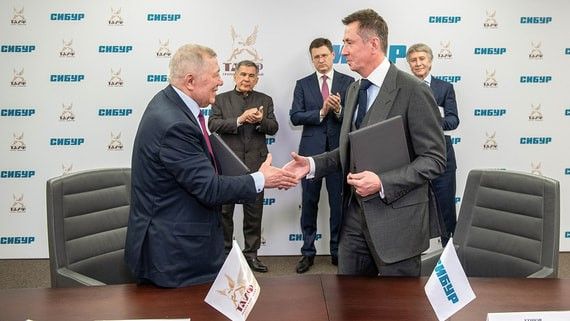 The symbolic signing of documents was monitored by the President of Tatarstan Rustam Minnikhanov, Deputy Chairman of the Government of the Russian Federation Alexander Novak and the owner of SIBUR Leonid Mikhelson

At the same time, part of the shares was to remain with the republican government. This conclusion can be made on the basis of changes in the Unified State Register of Legal Entities. As indicated on the Rusprofail website, on June 3, 2021, the Tatarstan State Property Management Committee, as well as a number of other owners, in particular, the Kazan foreign trade association, left the TAIF co-founders. That is, apparently, the Tatarstan government, losing a minority stake, will not be able to request even financial documents of the structure.

Meanwhile, according to the results of 2019, TAIF, according to its own estimates, produced 19% of the total volume of shipped goods and services in Tatarstan, and its share in the settled financial result of the republic was 31%. Now this piece of the market will be controlled from outside the region.

You don't have to go far for examples. About the same fate befell the company "Ammony," which now belongs to the entrepreneur Roman Trotsenko. Some market players believe that Trotsenko could act in the interests of the head of Rosneft, Igor Sechin, and Mikhelson - to advance in obtaining one of the best petrochemical assets in the country.

Earlier, Trotsenko served as an adviser to Sechin at Rosneft, and also headed Rosneft Overseas, the Swiss "daughter" of the oil company. Many believe that he acts in the interests of the head of Rosneft, allegedly acting as a nominal holder of assets.

Moreover, it is not yet clear to the end where most of the taxes of the enterprise will go. Commenting on the deal, the chairman of the TAIF board of directors, Albert Shigabutdinov, promised: thanks to the agreement, revenues to the consolidated budget of Tatarstan will grow to 50 billion rubles a year by 2030.

But in fact, everything will depend on the will of SIBUR. And, therefore, Leonid Mikhelson, who may well change the place of registration of Tatarstan enterprises. In any case, this means a serious redistribution of the republican market - after all, of the local players in the field of oil and gas chemistry, only the republican TATNEFT remains.

The latter should be fully controlled by the current head of the Republic, Rustam Minnikhanov. He is the chairman of its board of directors. Shaimiev and his people could be represented by the general director of TATNEFT Nail Maganov, who also worked with Shaimiev. However, experts claim that assurances of continuity between Shaimiev and Minnikhanov faced economic issues, and the former president, together with his team, was long moved away from TATNEFT.

What does it mean? It seems that the Shaimiev family is tired of confronting other groups of influence and connected the most powerful federal resource in the person of Mikhelson - albeit at the cost of controlling part of the company. Michelson in this situation only wins.

Redistribution awaits the energy market of the region. It is known that the perimeter of the transaction with SIBUR will include a TGK-16 owned by TAIF. And together with her - and all under construction generation on "Kazanorgsintez" and Nizhnekamskneftekhim, that is both the Kazan CHPP-3 and the Nizhnekamsk CHPP-1.

In the energy market of the region, there has long been a confrontation between the state-owned Tatenergo and TAIF, but now this dichotomy will receive a replacement. Instead of TAIF, Tatenergo will interact with SIBUR, and the parameters of this interaction remain a mystery.

Through the thorns to TAIF

Today, experts recall that SIBUR has a long and complex history of relations with the authorities of Tatarstan and local companies. Back in 2007, SIBUR argued with Kazanorgsintez, a member of TAIF, over the issue of ethane supplies: the federal company fed a Kazan enterprise with raw materials, and partners had serious disagreements over volumes and prices. In the case of unification, such problems simply will not arise - prices will dictate in SIBUR.

Deliveries at some point were blocked, and then the question arose about the entry of SIBUR and Gazprom into the capital of KOS for debts. About this writes the publication "Business Online". 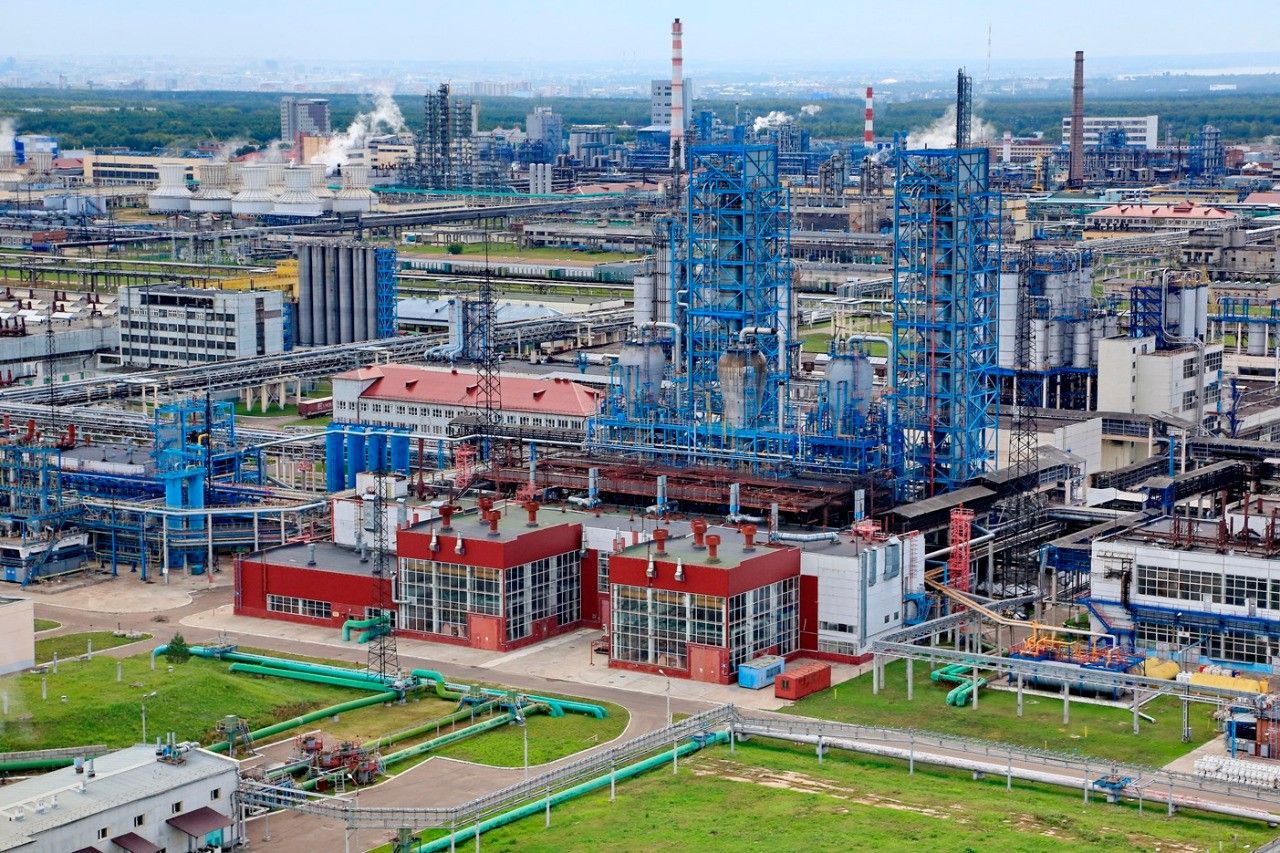 PJSC Kazanorgsintez could enter the SIBUR circuit back in 2009.

The then president Mintimer Shaimiev, whose sons already owned shares in the TAIF, as well as Prime Minister Rustam Minnikhanov, took part in the resolution of the conflict. In 2009, the parties suddenly concluded a new, direct supply contract. According to ill-wishers, allegedly it was then that Mikhelson was able to find a common language with TAIF and indicate for himself the possibility of a future takeover of the company. Only no longer Kazanyonrgsintez, but the entire structure.

Today Leonid Mikhelson is one of the richest and most influential billionaires in the country. He regularly confronts other strong players on economic issues, including when serious budget support is at stake.

We can recall his conflict between the Mikhelsonovsky Novatek and Igor Sechin over gas carriers for the Arctic LNG project, when Mikhelson was actually imposed a contract with the Zvezda shipyard, and not with a cheaper offer from South Korea. Thus, if the assumption that the merger of SIBUR with TAIF will hit the interests of Igor Sechin correctly, Mikhelson will recoup with an equally large score.

Michelson's other conflict is also related to Novatek. The other side was Gazprom, led by Miller, who advocated transporting liquefied gas through pipelines, and not by gas carriers along the Northern Sea Route.

Thus, the takeover of TAIF will extremely be a long-awaited major victory for him, which can lead to monopolization of the market. And since this is the case, Michelson will not miss his opportunity.

02 February, 8:27
Pulled to the origins: the business interest of the relatives of Deputy Prime Minister Khusnullin got to the potatoes