How many Doev to the state: who is behind the collapse of Gazprom's "daughter"?

Having been without funds, Energogaz is not the first such case in the "track record" of the co-owner of VIS Group of Companies?

In our country, no one will be surprised for a long time by schemes of deliberate bankruptcy, even very complex ones. It is surprising how sometimes subsidiaries of even market giants let "under the knife." And they are not at all afraid of the consequences for themselves personally. In this context, The Moscow Post correspondent draws attention to the sad history of Energogaz.

In March, the Moscow Arbitration Court will consider a lawsuit to bring several defendants to subsidiary liability for debt obligations of the bankrupt Energogaz company. These are Gazprom Tsentrenergogaz JSC (the former owner of Energogaz), Gazprom Tsentrremont LLC, Scientific-6 LLC and Gazprom PJSC.

The former head of Gazprom Tsentrremont, and now the general director of the VIS Group Dmitry Doev, entrepreneurs Sergey Vladimirov and Alexander Psatiy, are also mentioned. This is reported by the publication Pravda UrFO.

The proceedings were accompanied by protracted disputes over the recovery of property.

Against this background, excerpts from the decision of the Moscow Region Court that "the motives for signing an agreement on the pledge of immovable property <... > were not disclosed, as a result of which all liquid property was disposed of from the property of Novichesky-6 in repayment of the debt to Gazprom Tsentrremont to pay the price of the assignment of the claim to Energogaz."

The court noted that the <... > definition accepted the refusal of Scientific-6 LLC from the application for inclusion in the register of claims of Energogaz creditors of debt in the amount of 1.43 billion.

According to the court, this indicates that, by concluding interconnected transactions, the parties pursued the unlawful goal of withdrawing liquid property from the ownership of a subsidiary in order to reduce the potential bankruptcy estate (a share in the authorized capital of the company) and, as a result, the inability to satisfy the claims of creditors.

Market experts insist on the deliberate nature of the bankruptcy of Energogaz, which, we recall, previously acted as a sub-contractor of the project to expand the Punginsky PCG in the Khanty-Mansi Autonomous Okrug.

If we delve into the bankruptcy mechanism of Energogaz, then the presence of the so-called "technical firms" is visible in the implementation of its scheme. In this case, these are Megabild and Antares. Both claimed their rights as creditors, but officially declared multimillion-dollar losses and were later liquidated. 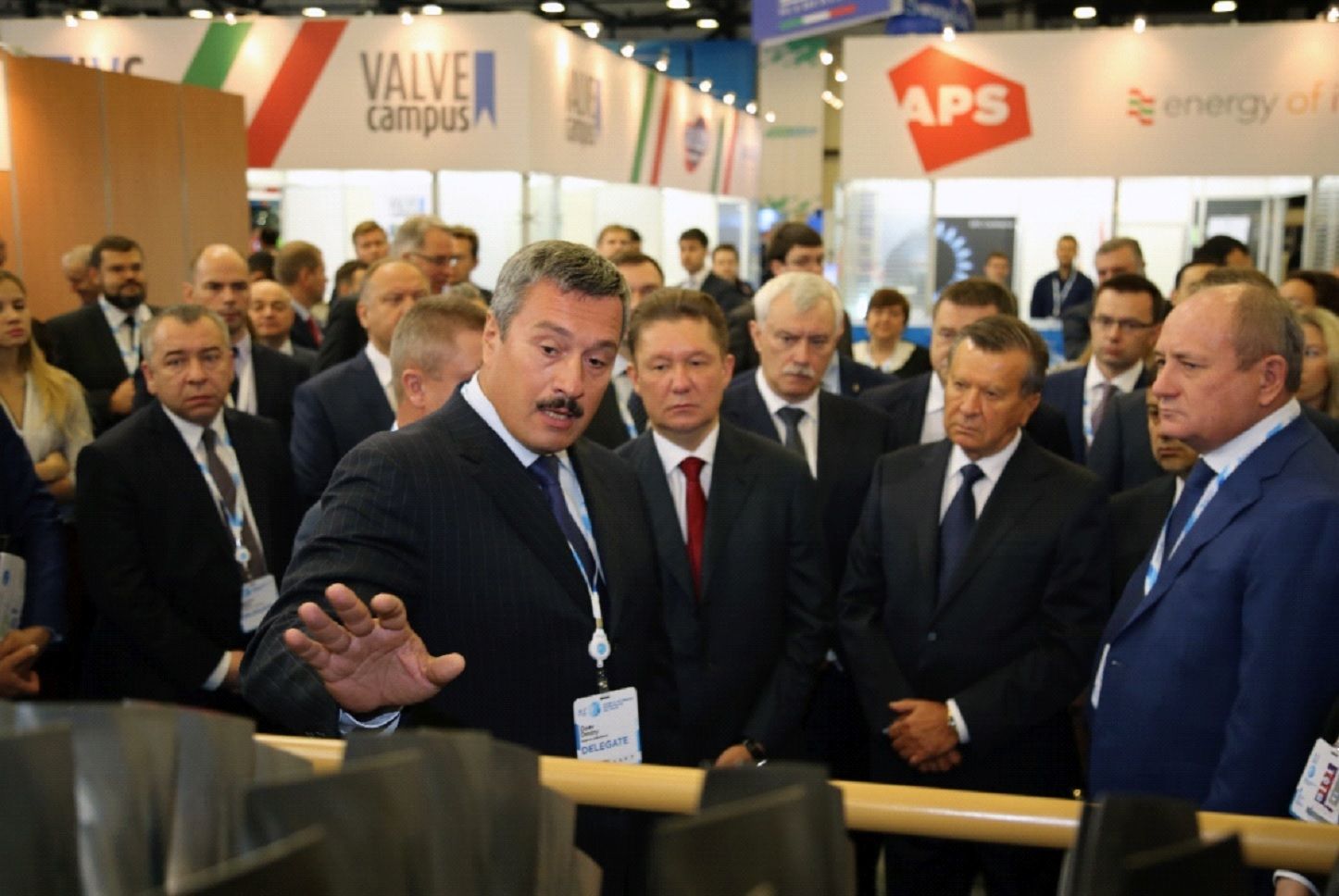 Dmitry Doev demonstrates the gas turbine engine to the Chairman of the Board of PJSC Gazprom Alexei Miller and members of the Government. Photo: centrremont.gazprom.ru

According to the authors of the Russian Reporter website, allegedly these "technical" companies were affiliated with the Russian Funds investment group, the beneficiaries of which are businessmen Sergey Vasiliev and Konstantin Beyrit, who allegedly put on stream the registration of such structures and their subsequent participation in bankruptcy. It is easy to assume that merchants could "participate" in the fate of assets from bankrupt enterprises.

As already mentioned, Gazprom Tsentrremont and its ex-head Dmitry Doev also participated in the bankruptcy of Energogaz LLC.

After leaving Gazprom's structures, Doev became the official companion of Vasiliev and Beirite. He, together with the head structure of the holding owned by him, Seligdar co-founded the new company - Golden Asset Management.

In September last year, Doev took the post of general director in the VIS group Igor Snegurov. And how to not recall the trial, during which Snegurov and Doev were opponents.

Recall that at one time the VIS group sued billions of rubles from the Novourengoy Gas Chemical Complex (NGHK) - by the way, also a subsidiary of Gazprom. This was previously written by The Moscow Post. Now this object is called the most hopeless long-term construction of Gazprom. 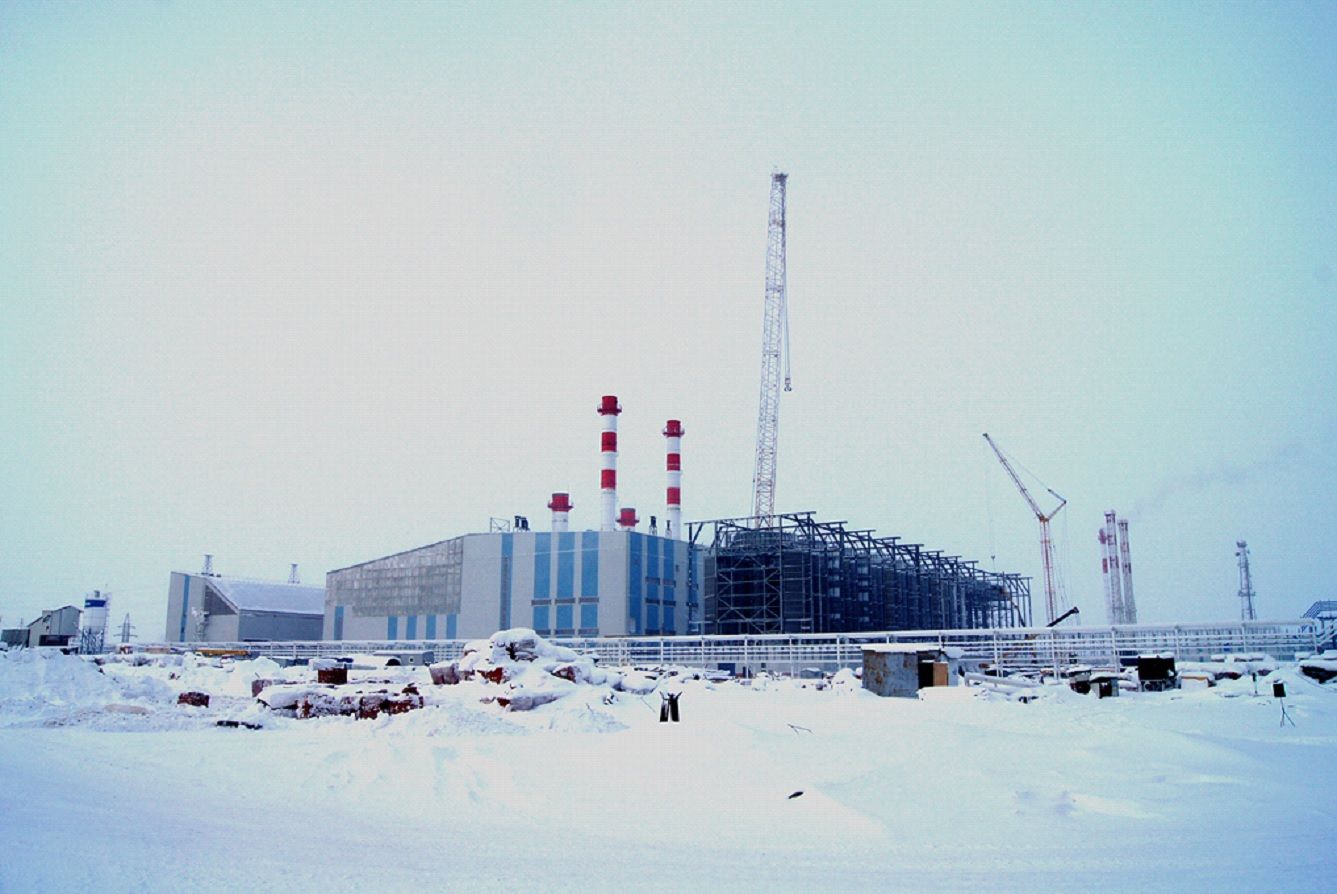 When the former general contractor for the construction of NGHK - PF VIS Igor Snegurov - managed to prove the multibillion-dollar debts of the subsidiary of PJSC Gazprom, the management company headed at that time by Dmitry Doev, showed determination to defend itself. This was expressed, including in readiness to send millions of Gazprom rubles to the services of third-party lawyers.

The result was two trials won by VIS totaling more than 8.2 billion rubles. And after some time, Dmitry Doev became already the general director of the VIS Group. 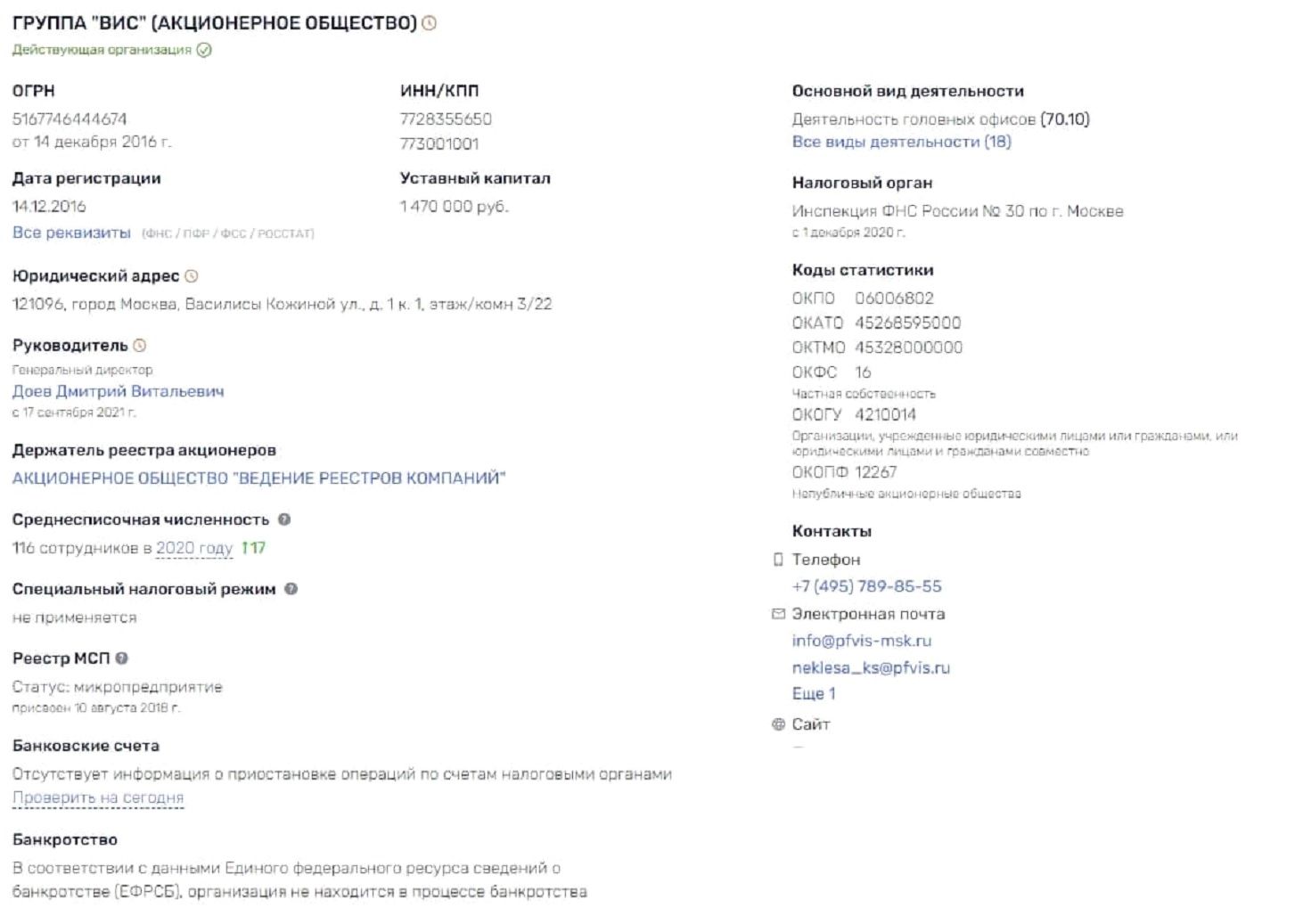 If you study the biographies of Doev and Snegurov, it turns out that they crossed paths long before that. Before working at PJSC Gazprom, Dmitry Doev was a member of the management of Sevzapinvestprombank: he was one of the founders of this bank. But in 2008 he withdrew from the shareholders. 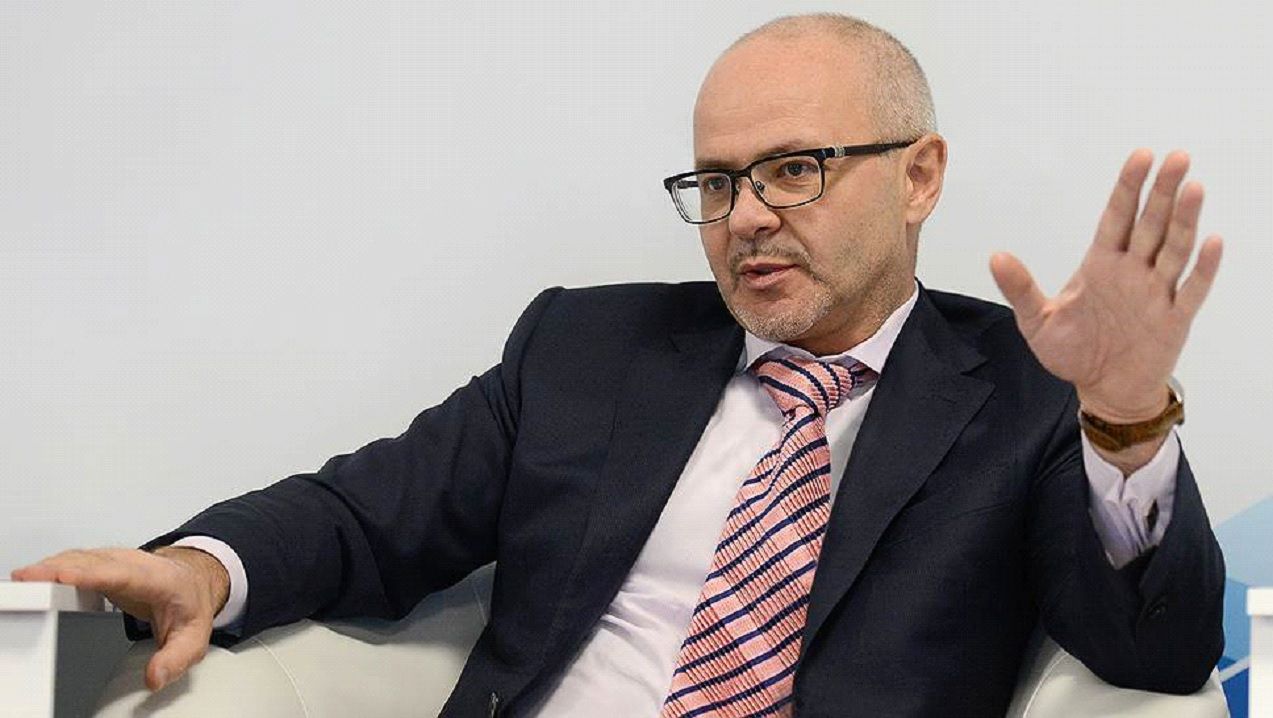 At the same time, leaving the bank did not mean a break in partnerships with friend-friends. As follows from the data of Rusprofail, the already known owner of the VIS group Igor Snegurov still has a stake in the bank - more than 15%.

Perhaps there is a strong friendship between Doev and Snegurov. Or perhaps it happened before. Because if you dig even deeper, it turns out: Doev was in the chair of the CEO of VIS for several months back in 2004!

The name of Dmitry Doev today is well known in Novosibirsk. One of the most recent news was the introduction of an observation procedure for Ecology-Novosibirsk LLC, a regional operator for the management of municipal solid waste (MSW). The company is part of the VIS Group of Companies, controlled by Igor Snegurov and his partner Dmitry Doev.

The structure became a re-operator for the treatment of MSW in 2019, since then there have been many scandals around it. Interestingly, she filed a bankruptcy petition herself, explaining it with the presence of overdue debt in the amount of 1.86 billion rubles. That is, the company itself admits - there is no money to pay.

But what about the head company of VIS, one of the largest construction groups in Russia? Experts say: recently, the company may have had serious financial problems associated with the entry of one of the key owners, Dmitry Doev, into a joint project with Rostec to develop the Kyuchus gold field. The Moscow Post also told in detail about this story.

The treatment of MSW is not the only example of public-private partnership of VIS structures, which is related to social issues. What is only the long-suffering fourth bridge over the Ob in Novosibirsk, which the group of Doev and Snegurov began to build as part of the PPP.

It was planned to hand over this bridge by the end of 2022. Two years ago, it became clear that VIS simply could not have time for this deadline. However, the owners of the group managed to agree on the extension of construction until September 17, 2023. Today and this date looks unrealistic. There is talk that the bridge can only be completed by 2024.

Novosibirsk was unlucky in the fact that it was the Seventh Concession Company, which is part of the National Medical Holding LLC of the VIS Group of Companies, that signed up to build seven clinics in different parts of the city at once.

It was assumed that the investor will invest 1.4 billion rubles, and another 1.6 billion rubles - this will be a grant from the region. The remaining amount was planned to be borrowed. At the same time, according to the terms of the agreement, from 2023 every three months the regional budget had to pay significant amounts to the concessionaire. But if earlier it was said about 260 million rubles, then payments somehow increased to 1 billion in 2023, and then at all 3.1 billion.

In fact, it is already obvious that the timing of the construction of clinics has been disrupted. At the stage of concluding contracts, it was assumed that the facilities would be commissioned in 2021. Then - in 2022. Now it is clear that they will be able to surrender no earlier than 2023, and this deadline may have to be moved.

The failure of the deadlines was recognized by the authorities. According to Taiga.Info, local deputies even suggested that they would never be surrendered. Probably, the problems of these projects are associated with the same as the scandal with the re-operator for the treatment of MSW. The company "VIS" banally has no money. 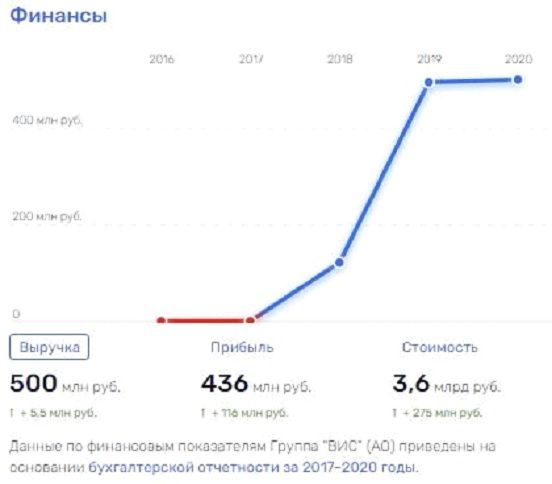 At the end of 2020, the same parent JSC VIS earned a total of 436 million rubles with revenue of 500 million rubles. Apparently, huge money from state contracts, and various subsidies, and assistance from local authorities are not taken into account here.

This is true, only before the auction for the development of the Kyuchus gold deposit in Yakutia, where Dmitry Doev so sought to get. Apparently, for him the goal always justifies the means.

Photo on the home page: gazprom.com