Okko became the property of Sergey Shishkin, a former subordinate of Sberbank. Under the umbrella of Sberbank and its needs, the head of the state bank continues to "distribute" assets "to his people"?

Recall that Okko was bought by Sberbank as part of other assets of the Rambler group, which was part of the ownership of the oligarch Alexander Mamut, back in 2020.

Market experts do not exclude that initially the purpose of the purchase of Mamut's assets was precisely the Okko online cinema, which they then decided to transfer to the right people. The Moscow Post correspondent understood the situation.

Initially, the market assumed that after the purchase of the former assets of Alexander Mamut in May 2022, part of his income companies would not be at all with Sberbank, but in private hands. Now in the Unified State Register of Legal Entities, Okko LLC has hidden the composition of the owners and general director. However, earlier, a number of media outlets reported that the beneficiary of the LLC was precisely its general director Sergei Shishkin, a former employee of Gref.

It is noteworthy that New Opportunities JSC, which at the time of the purchase of Okko LLC from Sberbank was headed by Irina Rebrova, and Tatyana Portnykh was listed as the owner. After that, information about the beneficiaries was hidden from the general public. For the sake of secrecy, the company changed its name to TMT JSC.

It is curious that the New Opportunities company itself was registered only in March 2022, and this suggests that it could have been conceived as a "transshipment base." Today, the company does not have information about finances - revenue, profit, asset value.

At the same time, earlier the authorized capital of the structure was 10 thousand rubles, and from the summer of 2022 it became under 70 million rubles.

Earlier, experts expressed the opinion that Mamut's former assets, through Gref's order, could be "in the orbit" of the beneficiary of the Independent Oil and Gas Company (NOC) Eduard Khudainatov.

The fact is that the full namesake Tatyana Anatolyevna Portnykh, who, at least until May 2022, owned New Opportunities JSC, was listed as a representative of the registrar company, which was associated with one of the major Russian banks.

And among other things, she was also part of the founders of eight companies. One of them, Expert JSC, is associated with Yevgeny Krasnyan, who, according to evil tongues, allegedly represented Eduard Khudainatov when transferring his assets to a number of companies.

However, for Khudainatov, doing online cinemas is too exotic, a non-core thing. It is much more likely that his people, by agreement with Gref, could simply "hold" the asset. For whom, now it is clear - the former deputy head of "Sberbank" Sergei Shishkin.

Not only Okko LLC turned out to be in New Opportunities JSC. There were also other digital assets and services that Sberbank has recently acquired and developed. This is the Sound music listening service, the SberCloud cloud provider, the Speech Technology Center and the Evotor online cash desk manufacturer, which was associated with the scandalous founders of the Qiwi payment service.

All of them were going to develop Sberbank, including Okko. He made serious plans for them. By the way, after the sale of Sberbank to Shishkin, he did not lose contact with Okko - access to it can still be obtained through the Sberbank subscription.

Gref wants to continue to earn money with Shishkin? Only at the end of 2021, Okko has a loss of 9.3 billion rubles, the value of assets is minus 14 billion rubles. I.e. "Sberbank" not only did not cover Mamut's debts, did he aggravate them? 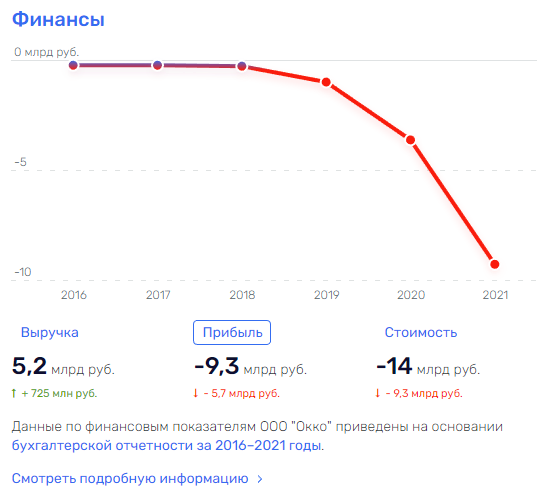 It is not clear what Shishkin will do with the company's debts, or the calculation of obtaining loans from Sberbank? Photo: Rusprofile.ru

"The Great Exodus" of Assets and People

Mr. Shishkin is a native of Gazprom Media. But trying to "attribute" Miller to his team would be strange - otherwise, rather, Gazprom would buy out non-core assets and transfer them to Shishkin.

At the same time, back in 2020, when Sberbank bought 45% of Rambler from Mamut, and became its sole owner, it turned out that he was not going to hold all the purchased assets. In the same year, Mr. Shishkin became the owner of 100% of Medianna LLC, which owns 80% of Rambler & Co, which manages the Rambler media.

Specifically, this is Lenta.ru, Gazeta.ru, Championat.com, Rambler News Service, "The Secret of the Company." By a strange coincidence, today it is very difficult to find critical materials on these resources about Sberbank, its divisions, and, of course, German Oskarovich himself.

And since 2020, a lot has already changed. One of the main ones is that almost all of Gref's former deputies and top managers of the state bank fled the structure like kitchen cockroaches that suddenly came to light. And the first to retreat was one of German Gref's closest associates, former deputy chairman Lev Khasis.

Obviously, many acquisitions of Sberbank in recent years were not prepared immediately - they were supposed to be integrated into the ecosystem of the state bank, allocating a separate direction for the development of digital assets. This was done, and Lev Hasis was appointed to lead it.

"Okko," "Sound," "Smermegamarket," SberCloud - all of them had to enter this "digital package" under the control of Hasis. However, after the start of the Special Military Operation, he is supposed to have flown to the United States. It turned out that there have long been assets associated with it - the Momentus group.

Its founders were Lev Khasis himself and his alleged wife, Olga Khasis. In addition, there is a document on the network allegedly related to the right to own the structure, which indicates the name of Olga Khasis, as well as her citizenship - allegedly, she is a US citizen. 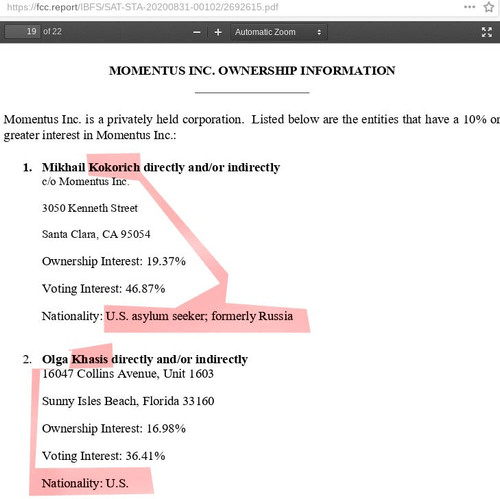 Moreover, former US Deputy Defense Minister John Rod (admire his biography on the structure's website) and the former head of the Pentagon's space development agency may be directly related to the Momentus company.

It turns out that right under the side of Herman Gref there could be a possible US citizen who was related to business in this country. Did he have direct access to the internal documents of the sub-sanctioned Sber, and then easily and simply "stubborn" after the start of the SVO?

However, it is unlikely that Gref initially had the intention to develop the services acquired from the same Mamut (and not only from him). Back in the summer of 2020, it became known that Sberbank concluded agreements with Rosselkhozbank JSC and Russian Auction House JSC in order to effectively cooperate in the sale of collateral and non-core assets.

Presumably, the agreement is bilateral - it means that Sberbank was already aimed at a big sale. The question is whose hands his assets end up in.

At the same time, with Hasis, the exodus from Sberbank has just begun. Soon other top managers left the company - board members Sergei Maltsev, Alexander Buriko and Natal Alymova and Bella Zlatkis. Perhaps they are no longer in the country, but in any case, no one will be surprised if a number of former Sberbank assets emerge in their hands.

It is significant how Gref himself commented on their departure: he did not hide that the reason could be personal sanctions restrictions - SDN sanctions, which imply blocking accounts and assets in the West. I.e. Did Gref indirectly admit that his inner circle could have such assets?

"The Last of the Mohicans"

One of the last of the old team of German Gref who remains in his post is Deputy Chairman Kirill Tsarev. In Sberbank, he is engaged in the provision of services to physicists, including mortgage lending. He is also the general director of Sberbank Leasing JSC.

He was the founder of a number of companies. An amazing thing - in just a couple of years, from 2019 to 2021, their cost increased from 668 thousand rubles to 36 million rubles. Almost 20 times. 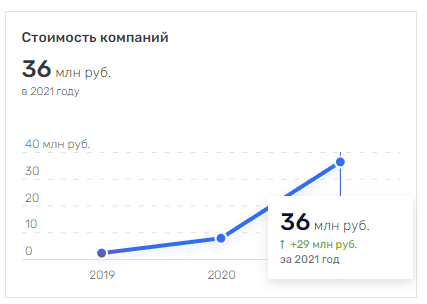 At the same time, Mr. Tsarev, a civil servant, is not a direct owner of businesses. But such are members of his family - Anna Vladimirovna Tsareva and Timur Kirillovich Tsarev. Moreover, in the case of Renthal Tech LLC, it turned out that they replaced Kirill Tsarev as part of the founders only in April 2022, that is, after the start of the SVO and the serious tightening of sanctions.

It turns out that until that time, Kirill Tsarev calmly owned such assets, being the deputy chairman of Sberbank, one of the influential Russian officials close to Gref. And no violation of the Civil Service Act?

At the same time, businessman Oleg Malakhovsky, who may be a close family friend, was found in the capital of the structure. He is the general director of the company. And in another company of the Princes, Renthal-Group, Marianna Orlova took the place of Tsarev as the founder. Previously, she, together with Kirill and Anna Tsarev, was the co-founder and then liquidator of the Tsarevo non-profit partnership.

She also co-founded both Rentals, and until the fall of 2021 she was a co-owner of Vostok shopping center LLC, a company selling cars. This structure had government contracts worth almost 180 million rubles. For the most part, with various departments from St. Petersburg - the hometown of Tsarev. 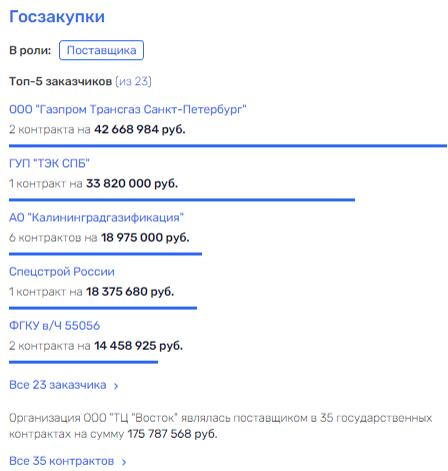 Maybe this is what keeps Kirill Tsarev from breaking with Sberbank - the presence of close assets, some of which may receive serious state support?

In the situation with Tsarev and Khasis, as in a drop of water, the attitude of German Gref and his team to the areas of work entrusted to them is reflected. Personal enrichment, muddy companies, the transfer of purchased assets in favor of people who were previously close to the head of the state bank.

Further plans of Gref are also interesting. However, Lev Khasis, who prepared assets in the United States, will be glad to him.