Lev Khasis, who fled to the United States, can bring a lot of trouble to the head of Sberbank - he knows too much.

As the correspondent of The Moscow Post reports, the former deputy chairman of the board of Sberbank Lev Khasis left Russia. And he did not just leave, but fled to the United States - to the main geopolitical "well-wisher" of our country. According to Vedomosti sources, Mr. Khasis found an American passport in a gas bag. And where did the leadership of the state-owned Sberbank, headed by German Gref, look all these years? Or was Gref in the loop?

To say it's a scandal, to say nothing. One of the key functionaries of the Russian banking system, Lev Khasis, is fleeing the country to the United States, while possessing tremendous knowledge of the work and structure of Sberbank, probably having information that can constitute a state secret.

According to rumors, Hasis was one of the first to flee the country, which shocked Sberbank managers. It surprises, or, conversely, does not surprise the silence of Herman Gref himself. According to evil tongues, allegedly Hasis could be Gref's "coherent" with his possible assets in the United States. Simply put, he is credited with the fame of the wallet of the head of the largest Russian state bank.

How much interesting US citizen Hasis will now tell American investigators and special services in order to safely get used to the United States. But The Moscow Post has repeatedly warned, raised scandals, showed "skeletons in the closet" of an "effective manager" from Gref.

Now only one question is on the mind: is Herman Gref himself going to come forward after his longtime ally? Even taking into account the stop of flights, it is worth looking after him - after all, another "benefactor" of our country Anatoly Chubais was able to sneak out through Turkey!

"Make Friends" with the Pentagon

Recall that even before starting work at Sberbank, Lev Khasis had a lot to do with the United States. First, he worked as CEO of X5 Retail Group N.V., and then improved to Deputy Chairman of the Board of Directors of Jet.com, Inc. After it was bought by the American corporation Walmart (one of the largest retailers), where Hasis also managed to light up. And only then the difficult one brought him to the Russian banking sector, where he was generously warmed by German Gref.

Hasis was not just deputy chairman, he was really Gref's right hand. And in the end, one of the most promising and profitable areas of the bank, e-commerce, was tied to it. Subsequently, it was allocated to a separate holding, which was to be led by Hasis.

It included the bank's investments in SberMarket, SberMegaMarket, SberLogistics, Sber Eapteka and SMM Retail, as well as a share in the joint O2O holding with VK. However, either on the eve of the special military operation of the Russian Federation to protect Donbass, or at the very beginning of it, Khasis "retreated" from the country - he never went to work in a new capacity.

Lev Khasis, of course, has insider information about the work of all these assets and divisions, which will now be able to change to the favor of the United States towards his person.

What is really wild: even in the status of deputy chairman of Sberbank, Lev Khasis allegedly flew almost regularly to the United States. And how not to fly - he quite officially became the co-founder of the "space startup" Momentum Space, which headed... former Pentagon deputy chief John Rood. RBC wrote about this.

And did not alert anyone, including German Gref, such cooperation, did not surprise? 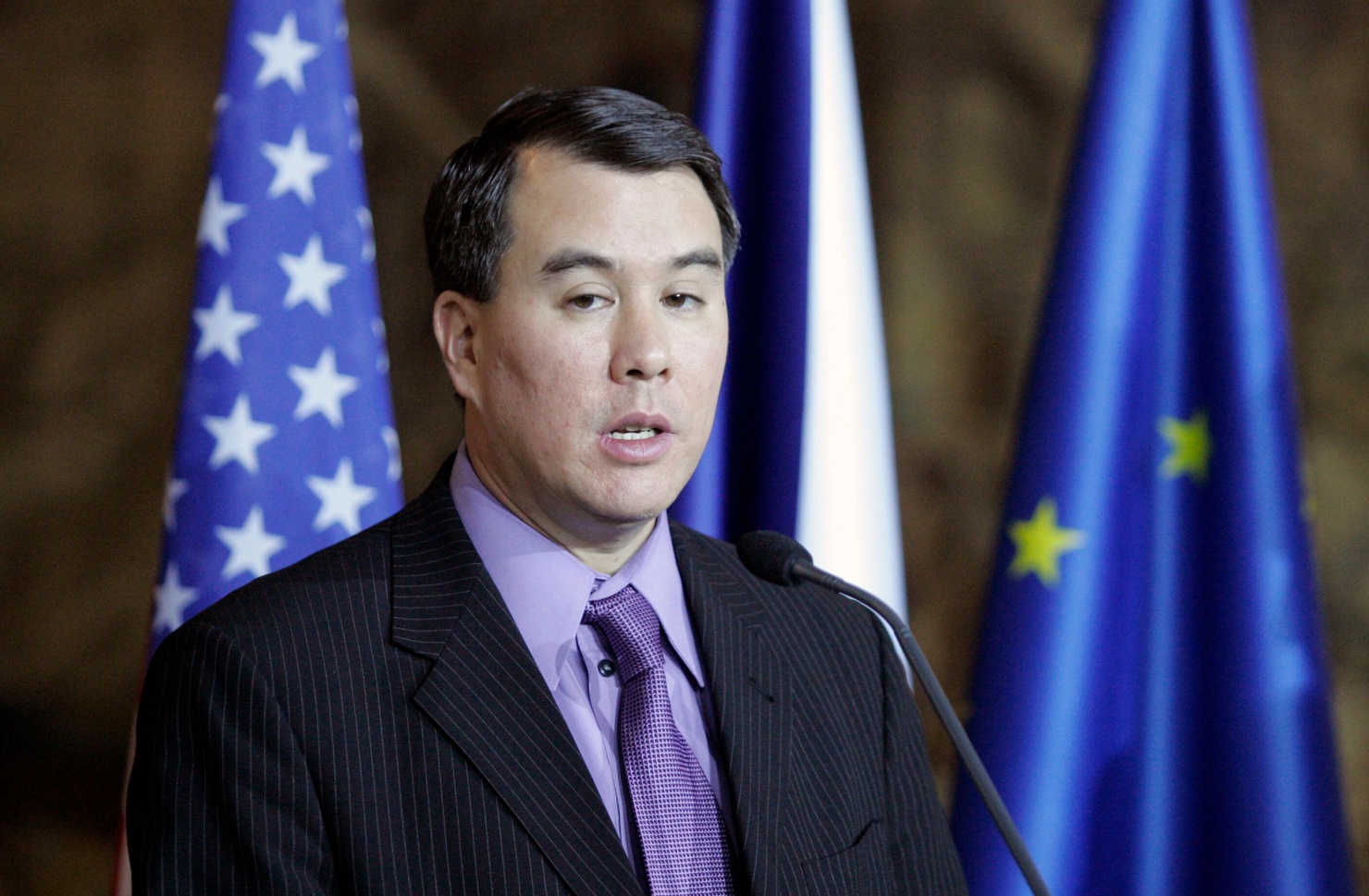 The infamous ex-head of the Russian company Technosila Mikhail Kokorich became Mr. Khasis's partner at the base of the structure. He was a co-owner of NPP Dauria. Earlier, a criminal case was opened against the leaders of this company Viktor Khartov and Sergei Ivanov - they were suspected of fraud on an especially large scale. This was written by a network publication Zab.ru.

And the NPP "Dauria" was engaged in the development of spacecraft, and even in cooperation with the Lavochkin NGO. That is, strategic things for our country. And, apparently, Mr. Kokorich decided not to wait for the final of that story, and safely moved to the States, where he became the co-founder of the space startup Momentum Space again.

Again - it seems that he could exchange his prosperous existence in the States for knowledge about the Russian space industry. But another thing is interesting: after all, Lev Khasis, who became his partner, as an official, had no right to own a business?

And he did not own. A document walks along the network, from which it follows that Mikhail Kokorich owned a business not with Khasis himself, but with a certain Olga Khasis-Finkelstein-Beschechnaya. Lev's wife Khasis is called Olga, so it does not seem difficult to bring it together. 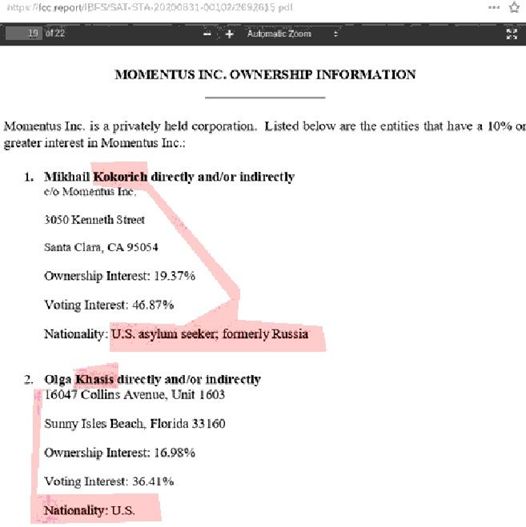 If this is true, then Khasis, being a top manager of the Russian state bank, first openly acted as the founder of the company in the United States, but did not own it, but transferred the shares to his wife. And also Kokorich, who fled to the States, is apparently the same "patriot" as Khasis himself.

Could the bank have been unaware of this? Of course not. So Mr. Gref was aware, and did nothing?

The same documents walking on the network indicate that Olga Khasis allegedly has American citizenship. In the same place, black and white are allegedly related to the group of the aforementioned ex-head of the Pentagon's space development agency, John Rood. Here is his biography on the organization's website.

And despite all this, Mr. Gref kept him "close to the body." Why? We recall the offshore scandal in which the time of Gref and his closest relatives lit up. As a result of the publication of the Pandora dossier, it became known that allegedly, about $50 million was found in accounts that could be connected with Gref in Singapore and Samoa. This was written by the publication Ura.ru. He could hardly have made that kind of money in his entire career.

Back in 2011, Herman Gref set up the Angelus Trust in Singapore to manage more than $55 million in family assets, according to the documents. The trust was subsequently liquidated. But before that, Gref decided to make the manager and beneficiary of the Angelus Trust a nephew living in Switzerland, 24-year-old Oscar Gref.

So, according to evil tongues, Herman Gref allegedly could hide part of his assets in the Hasis family - in particular, from his wife or other close relatives. Of course, there is no real confirmation of this - but why then did Gref keep such a manager?

Not to mention the fact that Hasis is credited with the fame of the main destroyer of Sberbank's largest failed transactions in the IT industry in recent years. It was like he was doing it on purpose.

For example, Forbes journalists describe a key meeting between Khasis and Ozon CEO Alexander Shulgin. After long hours behind closed doors, Shulgin ordered his subordinates to break all existing agreements with Sberbank. "Hasis's tough behavior in the negotiations is character features multiplied by the scale of Sberbank," a Forbes source close to Yandex said at the time. "He doesn't know how to play partnerships."

The deal with Yandex, as you remember, also fell through with a crash. Or another major area is the collapse of the partnership with Mail.ru Group, the Chinese giant Alibaba, and, like a cherry on a cake, with the leading Russian network Vkontakte. All these areas were directly supervised by Mr. Hasis.

Now that he has fled to the US, it can all be viewed differently. Could such a policy of the deputy chairman of Sberbank have been purposeful. And was it not the task to inflict maximum damage on the high-tech direction of Sberbank's work in order to weaken it as much as possible in a situation of sanctions pressure. 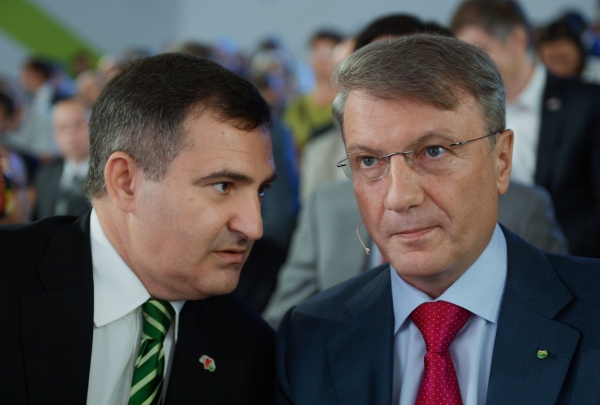 Recall also that all these events took place last summer - exactly before the geopolitical "storm" and the sharp departure of Mr. Khasis. Another question is why Hasis was even released from the country, and was there the hand of German Oskarovich Gref, who turned a blind eye to the misses of his subordinate for so long?

One thing is clear - whatever happens to Hasis, it will not be possible to get him now. From Washington, as you know, there is no extradition - ask at least Victor Booth.

But German Gref is still in Russia. And it is better for him not to plan foreign trips.