Was Mikhail Gutseriev given a year to withdraw assets from Russia and disappear without a trace?

As it became known to the correspondent of  The Moscow Post, the Federal Tax Service granted Mikhail Gutseriev's RussNeft a deferred payment of 8 billion in taxes until the end of the first half of 2021. Whether the billionaire will ever pay this money is a controversial question. May he be given a delay so that he could withdraw his assets abroad at a calm pace and "get lost" there? Will he continue to adjust in Belarus or have problems of Alexander Lukashenko turned him away from this idea?

It is unlikely that this delay will somehow save RussNeft: as TASS wrote, the Moody's rating agency predicts a default of the company in just 12-18 months. Now the company's debt on loans is more than 1 billion dollars.

In total, the Safmar structures of Gutseriev accumulated debts of almost a trillion rubles, especially the "wallet" was hit by the collapse of Binbank and Otkritie bank. Now businessman owes 325 billion rubles if only one Sberbank is mentioned, as Forbes wrote. Gutseriev even managed to persuade Trust, one of the creditors, to forgive multibillion debts at first. But in the end, the Bank "changed its mind": it was said that they "did not forgive, do not forgive and are not going to forgive" anything, as RBC writes.

Anyway, the rumors don't stop. Even now, after the news about the postponement for RussNeft, evil tongues began to speak, allegedly the state actually "presented" the oligarch these 8 billion - there are no illusions that he will return them. It still won't save his company, but it will help to withdraw money abroad. And Gutseriev's things do not go well now. The fact is that it is rumored that the main part of the assets has been "drained" to Belarus for several months. And the current political situation in the Union state is not in his favor.

So, as the authors of the telegram channel Nezygar write, the oligarch is allegedly riding between Moscow, Minsk and London with a certain negotiating mission in the interests of Lukashenko... Gutseriev is trying to save the position of his influential Belarusian patron. Otherwise, who will support him?

According to Naviny.by, the security forces have already taken over the oligarch and his Safmar in Russia. In April of this year, Lukashenko even had to personally stand up for his confidant before Putin: according to Tut.by, the President of Belarus asked "not to press" Gutseriev. And now, apparently, they have begun to "press" the politician himself. So, it's time for the billionaire to "pay off his debts" and stand up for the leader of a neighboring country.

Friendship is friendship, but where to run?

The warm relations between Lukashenko and Gutseriev have been going on for almost 20 years. The politician calls the oligarch "Misha" (short name from Mikhail) and even calls him to "chat" in between important state affairs, KP wrote. In response, the billionaire throws parties in Minsk with the participation of Russian performers at his own expense and invests in infrastructure facilities in Belarus. In particular, Gutseriev built the Renaissance hotel there, a terminal at the airport, a business centre and a recreation centre in Krasnoselsky.

Lukashenko found time to talk to Gutseriev after a voluntary Saturday

The Russian businessman also has his own assets in Belarus. In 2011 he founded Slavkaly, which develops Nezhinsky Deposit of potassium salts. And recently it became known that the Beristore Holdings Limited company, controlled by the oligarch's son Gutseriev, acquired the Belarusian Paritetbank. It is curious: how the businessman who has huge debt in Russia found money for a Belarusian asset?

In addition, Said Gutseriev is a co-owner of a crypto exchange Currency.com and a number of IT startups in the Union country. Does it turn out that the family is becoming more and more integrated into the Belarusian economy?

But what will the billionaire do now? It is quite possible that he will refuse to move to Belarus. After all, his influential patron is in a bad situation now - for the second week the whole country is out protesting against him. In Russia, they are not in a hurry to save Lukashenko - "flirting" with the West, apparently, has not been forgiven.

If the Belarusian leader had known what was waiting for him in August, he would certainly not have "fawned" on the European Union during his election campaign. After all, wasn't a "performance" with the capture of 33 Russians from the PMC "Wagner", who allegedly made their way to Belarus to arrange "chaos" there, played for them?

In any case, the show is already over. Recently, the Russians were handed over to their Homeland. Although earlier Lukashenko told Western politicians that he would not allow this. By such a "maneuver" he is trying to earn the favor of Putin again? But after such a "trick" Europe certainly will not stand on the side of "Batka". As a result, so far he has remained without support: neither the West nor the East "get along" with him.

Are both Gutseriev and Lukashenko in "disgrace" now? Where then can the comrades run if the situation in Belarus does not resolve in their favour?

Mr. Gutseriev could have accumulated enough money in offshore companies to "lay low" somewhere abroad and live comfortably. In particular, one of RussNeft's structures, RussNeft-Bryansk, is 49% owned by STRANGFORD HOLDINGS LIMITED, registered in the British Virgin Islands. Judging by financial indicators, Russian companies can withdraw money from it. Thus, with revenue of 206 million, the company's profit is minus 147 million! 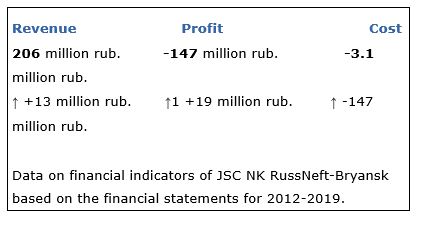 The offshore company is the founder of another subsidiary of RussNeft – JSC Chernogorskoe. The company is 49% owned by Merapi Holdings Limited of Cyprus.

It is through these two foreign companies that money can be withdrawn from other  subsidiaries of RussNeft with unhealthy financial indicators. We are talking about Tomskaya Neft with a profit of minus 66 million rubles, TD RussNeft (-8.6 million) and M-trade (-4.6 million).

There is still at least a channel for "draining" money. The Gutserievs own ForteInvest, which is also registered to a Cyprus company. The Russian company, by the way, also has a negative profit - minus 5.9 billion rubles! 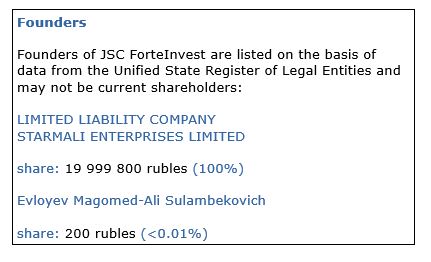 Will ForteInvest go bankrupt to "cover up" the traces of the scandal connected with it? As RBC  wrote, in 2019, a criminal case was opened on fuel smuggling from the Orsk oil refinery (part of the ForteInvest group). According to law enforcement, diesel from the Orsk refinery was supposed to go to Turkey, but for some reason it ended up in Ukraine. Although since 2015, a special permit is required for delivery to the Ukrainian market. Can the Gutserievs establish ties with another neighbour? May they move to Ukraine, if it doesn't "work out" with Belarus?

In the case of Forteinvest, Gutseriev managed to avoid criminal prosecution. It is rumored that in this case intercessors from the authorities helped.

But who will now defend the interests of Gutseriev if his Belarusian friend does not rectify his situation? In Russia, it seems, they do not intend to continue to tolerate the entrepreneur. It looks like, for some reason, they "took pity" over the billionaire and gave him a year to pack his things and disappear without a trace.