The owner of the Guta group, Yuri Gushchin, could leave the Russian Federation. What should creditors and equity holders do?

According to sources of The Moscow Post, the owner of the Guta group, Yuri Gushchin, allegedly could have purchased passports from Malta and the Seychelles, and changed his name to IOURI GOUCHTCHINE.

Gushchin filed an application (No. 1024/2021JVC) to amend the Public Register Act No. 2348/2018 in the State Register. The essence of the requirement may just concern the removal of his patronymic from the base so that it cannot be identified.

At the same time, Mr. Gushchin continues to do business in Russia, but the financial indicators of this business suggest that he may face imminent bankruptcy. The money invested in the Guta group from the outside may then be "beyond the sea" and out of reach for Russian justice. Details - in the material of the correspondent of The Moscow Post.

A company associated with Gushchin, who bought two Seychelles Coral Strand Hotel and Savoy Hotel, the other day lost a dispute with the local owner of the hotel, Natalie Lefebvre, from whom Gushchin's structures tried to buy out a stake for $1 instead of its real value.

One of the defendants is Yuri Khlebnikov. This is one of the creators of the Guta group. According to the authors of the Vlast website, allegedly in 80 Gushchin and Khlebnikov were convicted in one case related to fraud, "causing major damage." Together they allegedly carried out illegal fraudulent operations, including in Guta Bank.

Ms Lefebvre is a minority shareholder in the first respondent, Beau Vallon Properties (hereinafter BVP). It acquired 213,280 shares of BVP in 2005. Further, these shares were sold without her knowledge by other shareholders of the company: in October 2016, two other defendants - Concordia and Drumbua entered into an agreement on the transfer of shares to Concordia BVP Drumbua. The court declared these transactions invalid.

By the way, the lawyers of the Seychelles side mention that one of the loans issued to the owner of the hotel looks like an attempt to launder money. The fact is that these funds were placed in a local bank account, and then returned back to the company that issued the loan, without any use. The court concluded that at least some of the loans BVP took out were indeed illegal.

Thus, it turns out that Gushchin and his old partner Khlebnikov tried to deceive both the local business owner and the withdrawal of funds through the asset in a dishonest way?

In minuses from all sides

In Russia, Gushchin owns the Guta group, which owns a mass of assets - from a bank to a confectionery factory. The total profit of all firms where Gushchin is the head, at the end of 2021 amounted to -607 thousand rubles.

A similar story is with the firms where Gushchin is the founder. The cost of his share for 2021 was negative.

Guta Bank itself, according to the latest data, has negative indicators literally in almost every line. It has no long-term assets, giant receivables. The most significant share of the bank's assets is formed from borrowed credit funds. 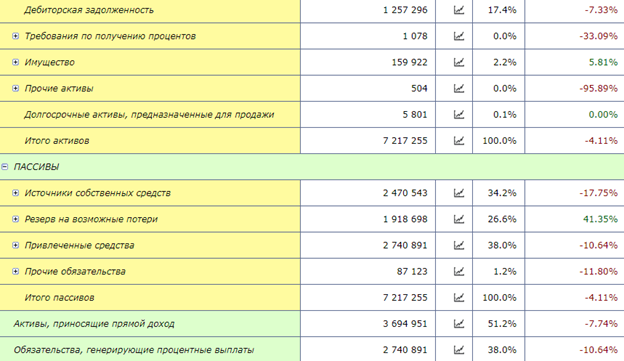 The data are based on changes in percentage of the previous period (per month) for January-February 2022. Photo: https://analizbankov.ru

There is reason to believe that the bank may soon wait for bankruptcy. And, quite possibly, deliberate. Was it the source of those funds that could have been issued as a fake loan to the hotel?

By the way, Guta-Strakhovanie recently tried to bankrupt. But the court returned the claim to the applicant. It is known that back in 2019, Vikon-Izhora LLC tried to bankrupt the company, but even then it was somehow possible to delay the seemingly inevitable.

In addition, some companies that have left the Guta group circuit directly have offshore firms on the list of their founders (such as Guta-Invest). This structure allows for financial manipulations that are not transparent for the Russian legislator.

As Izvestia wrote, in 2003, the head of Gosincor Holding, Yuri Petrov, and his son, the head of Guta Bank, Alexander Petrov, were summoned to the Prosecutor General's Office to testify in the case of embezzlement of about half a million dollars during an illegal operation selling three hundred tons of silver. In Guta-Bank itself, information about the interrogations of the leadership was categorically denied. But the fact that the media freely disseminate this information rather suggests otherwise.

Judging by the deplorable situation at the moment there are assets from the Guta circuit, as well as Gushchin himself from the point of view of business in the Russian Federation, it is possible that now he is engaged in the smooth "pumping" of those resources that remained in his structures, abroad in order to bankrupt business in the Russian Federation and evade responsibility in the Seychelles and Malta.

Yuri Nikolaevich is known as one of the most secretive entrepreneurs, whose personality was "overgrown" with a lot of unpleasant rumors and facts, including the fact that in his youth he spent most of his life in the area not so distant for serious crimes. And there he allegedly enlisted the experience and connections that allowed him to further organize his business.

As for his activities in the field of the entrepreneur, a number of ambiguous transactions and illegal operations loom here, to which Gushchin may have the most direct relation. For example, it was on the initiative of Gushchin that a criminal case could be opened against the former partner of Guta and the owner of Glavtorg (the last of the distributors of the United Confectioners holding owned by Guta) Karen Nalbadyan.

Businessmen quarreled on the basis of non-payment for deliveries to Nalbadyan. The United Confectioners then tried to prove that they personally produced the products that Nalbadian supplied them, and therefore did not owe anything. It didn't work out.

Subsequently, United Confectioners chose tactics for a friend and stated that for a reward from the general director of Glavtorg Nalbandian, they provided the company with maximum discounts, after which a criminal case was initiated under the article of commercial bribery, and the director and beneficiary himself was sent under house arrest. The situation and possible participation in the "liquidation operation" of the head of Sberbank German Gref was told in detail by The Moscow Post.

The Moscow Post also suggested that it was to Gushchin that strings could be drawn from officials of the Federal Property Management Agency of the Moscow Region, who, presumably, are engaged in fraud with real estate and land.

For reference: Gushchin's son-in-law Artem Kuznetsov through MR Group Timokhin knows the ex-shareholder of the company Timur Gutnov, whose brother, in turn, is Sobyanin's only son-in-law. Mr. Gushchin was also credited with close friendship with persons from the entourage of Russian President Boris Yeltsin and Moscow Mayor Yuri Luzhkov.

Mr. Kuznetsov's reputation is no less than Gushchin, overshadowed by near-criminal stories. According to the authors of the Russian Reporter website, allegedly in the Interpol data bank there is an official request from the German police regarding Russian citizen Kuznetsov Artyom and two of his fellow citizens. According to the request, these individuals are suspected of "money laundering through personal accounts with German banks."

It is possible that it is the administrative resource that helps Gushchin to feel relatively protected and to do all the things that are attributed to him, slowing down on the other hand the total bankruptcy of companies from which you can still pull something out. Until now, Gushchinsky structures are implementing development projects in the capital.

There is no need to go far for examples. In 2022, Guta-Development opened sales in the residential complex on the territory of the former Krasny Oktyabr plant. She has been tormented by the project since the 2000s, and it is not a fact that she will finish, but she wants to earn money.