Guryev's "offshore empire": how the "deck" was shuffled

It seems that the Guryev family hid assets in the West in such a way that ill-wishers will not be able to sue PhosAgro shares with all they want.

The Moscow Post received interesting information from a source that concerns the former and current beneficiaries of PhosAgro Group of Companies, one of the world's largest producers of phosphate fertilizers necessary for food production.

It is believed that the key owner of PhosAgro remains Andrei Guryev and the closest members of his family. The informant provided information about persons and companies (Russian and foreign) that may or may be related to PhosAgro assets.

The informant claims that allegedly since the time of Menatep, the shareholder of PhosAgro was the Cypriot offshore Cordial Limited, opened in 1995 and now liquidated. In the leadership was a certain Antreas Michael (ANTREAS MICHAIL).

Another offshore company, according to the source, is Flotork Limited, also from Cyprus, and also opened in 1995. His manual lists KORNILIOS ZORPI, GEORGIA ZORPI.

Allegedly, these are shareholders of the times of Menatep, as well as foreign agent, terrorist and extremist Mikhail Khodorkovsky. The attack on the latter was carried out so harshly that the above structures and nominal directors of firms in other Russian businesses never appeared. Where they went is not clear, but Cordial Limited was liquidated in 2011. The second is still operational. 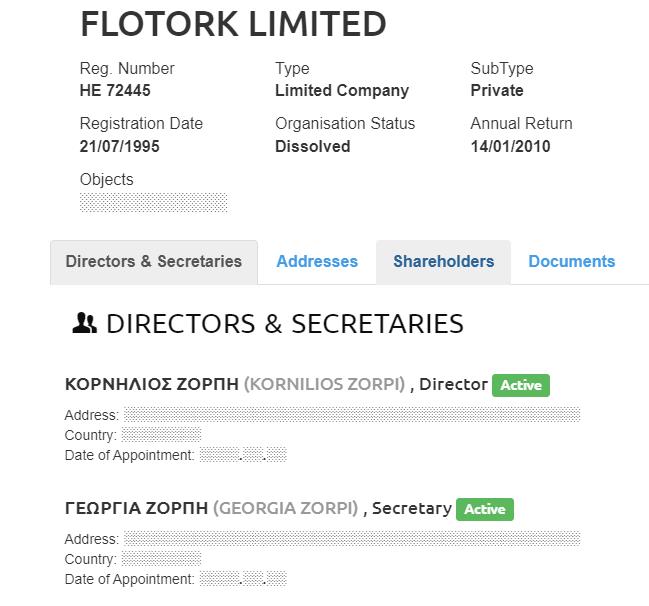 Perhaps for many years a significant part of PhosAgro's assets was hidden in these two offshore companies after the end of the story with Menatep and the beginning of Andrei Guryev's free sailing. But then began the dark times of the geopolitical crisis and sanctions restrictions.

In March 2022, PhosAgro PJSC announced the reduction of its stake in the authorized capital of Phosint Limited (address: 24/10/2011 Basίli Michailίdi, 21, 3026, Limassol, EYI PILABAKI), through which the company controlled foreign trading. Then 95% of the shares were bought by the management of trading structures through the Cypriot "Negrinio Limited."

The bottom line is that the structure transferred control over foreign trading to Negrino Limited, leaving only 5%. Information about this is available on the PhosAgro website. It was probably assumed that this would avoid sanctions for Negrino Limited and calmly continue to trade in fertilizers.

And then we will step aside a little. The fact is that one of the beneficiaries of PhosAgro and the likely partners of Mr. Guryev, according to our informant, could allegedly be Elbrus Magdeev - perhaps the son of Rustem Magdeev, known as the former assistant to the current head of Tatarstan Rustam Minnikhanov.

Elbrus Magdeev was and remains a co-owner of Open Investments LLC, which, according to the source, is allegedly the owner of 1.5 hectares of land of the Ministry of Defense in Kazan. Then Farhat Vafin was among the owners: today these two also remain co-owners of the company.

At the same time, another thing is interesting: the address of Blogverse holdings limited in Cyprus VASILI MICHAILIDI 3026 LIMASSOL is very similar to the address of the aforementioned company Phosint Limited (Basίli Michailίdi, 21, 3026, Limassol). The question, apparently, is the correct spelling. I.e. it can be assumed that both of these offices are affiliated and were located in Cyprus at the same address. And then they worked for the same people. 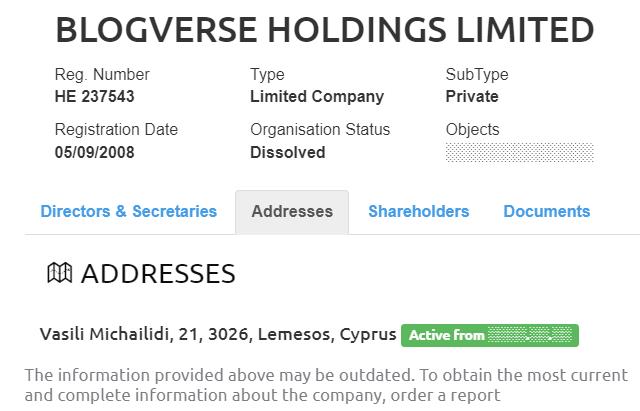 Could Rustem Magdeev have anything to do with Andrei Guryev and PhosAgro? It is not possible to accurately answer this question, but there are suspicions. At the same time, Magdeev himself is an incredibly scandalous character, and is actively suing journalists who are trying to present his lowdown to the public.

Gazprom on the wire

You can read about this in the material of RBC. However, there for the most part we are talking about companies associated with Gazprom. And there the Messrs. Guryev can also have their own people. For example, the long-term press secretary of Gazprom Sergey Kupriyanov. Which, by the way, in recent years has disappeared somewhere from television screens... I wonder why?

After the introduction of serious sanctions, the Guryevs, apparently, thought that it was necessary to "hide" better and deeper. According to the source, Negrinio Limited changed its name to Purefert Holding Limited. And this is a familiar name for the offshore, which they tried to connect directly with the Guryevs, and which was discussed in our previous article.

In a strange way, the previous name of the same company until August 2022 was Phosint Limited - another offshore company, which we mentioned in the past material, as a likely "goblet" of Messrs. Guryev. 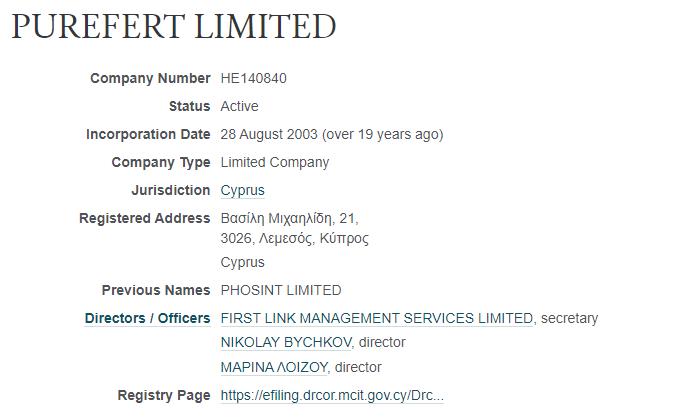 In turn, according to the source, another company has also changed its name - the name of PhosAgro Trading, which, apparently, carried out trading operations on behalf of the Russian Guryev holding, has also changed to a similar one (Purefert Trading AG).

Our source claims that none other than Sergei Kupriyanov, the full namesake of the press secretary of PJSC Gazprom, turned out to be in the leadership of PhosAgro Trading. On one of the Czech sites that maintain a register of legal entities and their leaders, his name is located in the same card with PhosAgro Trading. It is indicated that he took part in the management of the organization. 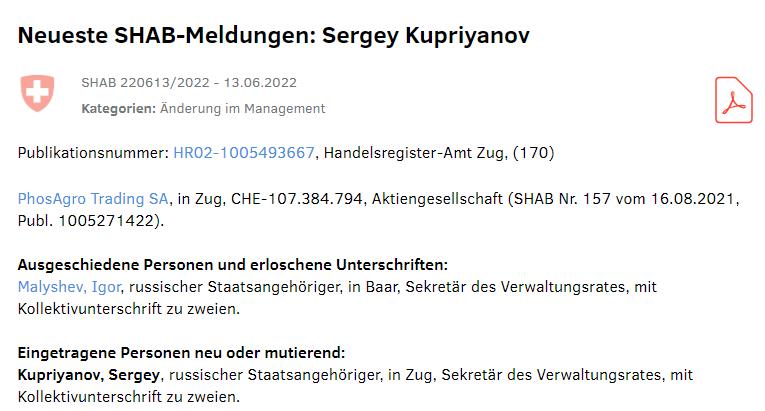 A reasonable question arises: how could an employee of the Russian state corporation Kupriyanov conduct such activities? And who could he be - one of the beneficiaries of the company, or just a lobbyist who receives bribes for his hard work?

Who else can relate to them? According to the source, this is the former general director of PhosAgro OJSC Maxim Volkov, who worked during the time of Menatep. Allegedly, he wanted not only to remain a shareholder of the structure, but also to increase his share.

Now, according to the source, he and the offshore structure of Menoza Trading Limited (registered at the already known address Basίli Michailίdi, 21 3026, Limassol) can now own 1.33 million shares, which is equivalent to 1.12% of the company's authorized capital. 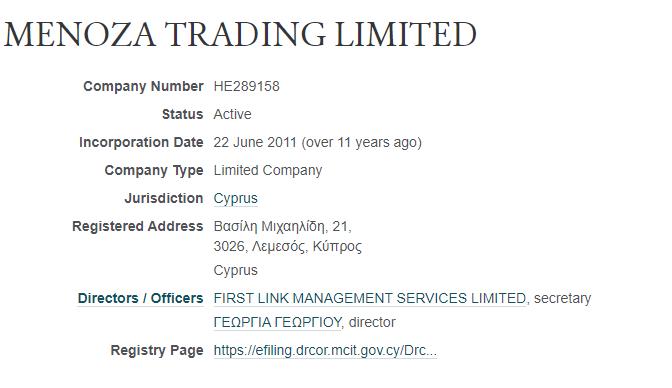 What about those who hold assets now? Among them, as we can assume from the information provided to us, Igor Dmitrievich Antoshin, a member of the board of directors of PhosAgro.

And besides him, the informant connects several more offshore structures with the PhosAgro business. It is Cyprus-based Vindemiatrix Trading Limited which has acquired control of Carranita Holdings Limited and Dubberson Holdings Limited. However, the fact is that all three of these companies initially had one leaders in the person of Alexander Batyukov and Andrei Tsvetkov.

The beneficiary of these companies tried to introduce Andrei Guryev Jr. However, as Vedomosti writes, it was the aforementioned Igor Antoshin who transferred ownership of his stake in Fosagro to Russian jurisdiction, liquidating the same Dubberson Holdings Limited, Carranita Holdings Limited and Vindemiatrix Trading Limited. It turns out that it was through them that he owned shares in the holding.

And now a little modern context to the circumstances described above. Today Andrei Guryev and PhosAgro are in a series of lawsuits. In 2021, in Britain, the London Court accepted the claim of PhosAgro co-founder Alexander Gorbachev against Andrei Guryev, demanding to recognize its right to 24.75% of the structure's shares. The amount of Gorbachev's claim is 160.5 billion rubles.

At the same time, the rights to 1% of the company's shares were stated by the former head of the PhosAgro tax department Igor Sychev. The essence of his claims is simple: at one time, even when Guryev and Co were related to the Menatep company of Mikhail Khodorkovsky (recognized as a foreign agent, terrorist and extremist in the Russian Federation) and Platon Lebedev, he was able to fight off the multi-billion dollar claims of the Federal Tax Service of Russia, which saved the company 300 million rubles.

For this, Guryev allegedly promised him 1% of the company's shares, but did not fulfill the promise. At that time, 1% was worth over $50 million. As a result, Sychev filed a lawsuit with the High Court of London, and while living in Latvia, he allegedly began to receive threats related to this case. The Moscow Post previously wrote about this.

However, our informant believes that all claims with attempts to obtain shares in the company or compensation, or to achieve sanctions bans on the structure's operations, are doomed to failure. Why? Because allegedly all related assets, including international traders of the company, are transferred to the trusts discussed above.

And the "decryption" of trusts and their "holders" is a very difficult and expensive business, where even a request for documents costs a lot of money. An example of a closed trust of the Stiftung type in Liechtenstein is given, one request for information on which costs 80 thousand (it must be understood, euros). 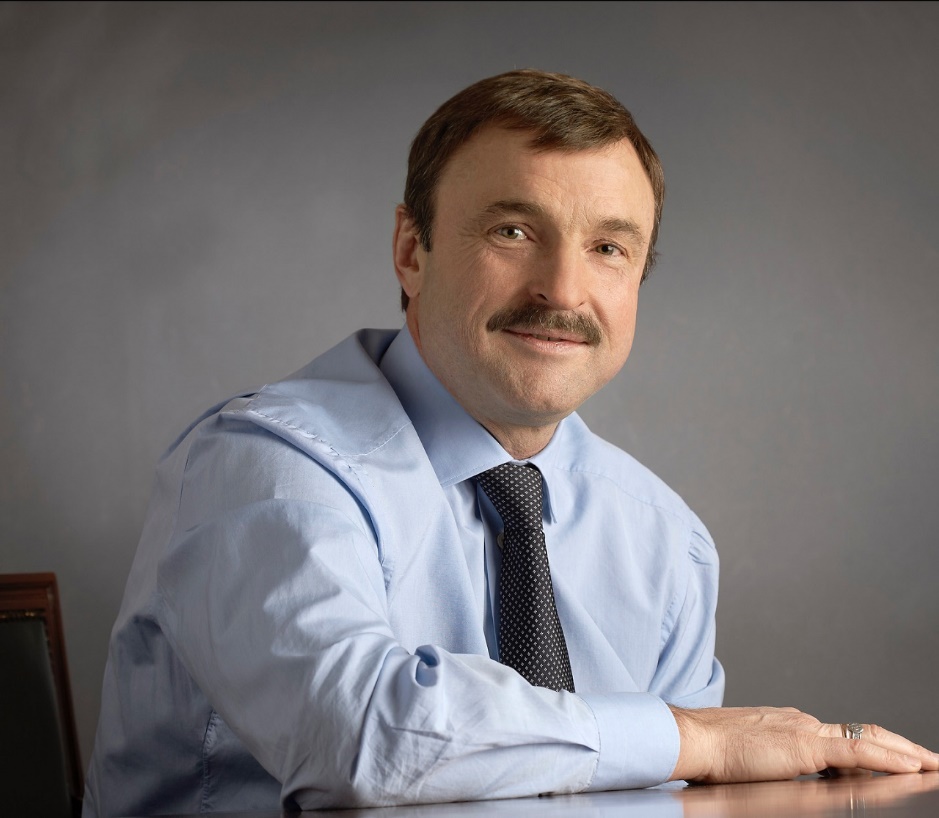 At the same time, Andrei Guryev himself, according to rumors, allegedly lives in London a long time ago, in the 25-room Witanhurst Palace. And even, as they say, the mustache does not blow. But it receives huge dividends from its Russian business.

In early November, with the current economic crisis and sanctions restrictions, the PhosAgro group paid its shareholders multibillion-dollar dividends for the first half of 2022. According to them, the Guryev family should receive 48.4 billion rubles, i.e. almost $800 million. You can't forbid living beautifully, the main thing is to hide assets in time...