Grigoriev "clears" a monument for garbage?

The site on Oktyabrskaya Embankment, 108, could have gone to a little-known company for a funny 12 thousand rubles, since they want to build a waste sorting station here? And although the locals are against it, the chief architect of the city, Vladimir Grigoryev, seems to be only "for".

The situation around the building and the site on 108 Oktyabrskaya Embankment, the right to lease which the St. Petersburg subsidiary of Gazprom, TGK-1, sold for a funny 12 thousand rubles, is still not quiet. It is possible that on this site in the historical center of the Northern capital, where, in addition, the object of protection of the identified object of cultural heritage is located, a waste sorting plant may appear. Residents have already actively opposed this initiative, wrote to almost all authorities, even the president. But on the nose is the start of garbage reform in St. Petersburg, which is scheduled for 2022.

Who can stand behind this, whose hands and in whose interests it is all realized wrote the correspondent of The Sankt-Peterburg Post.

Earlier, The Sankt-Peterburg Post talked about the sale of property on 108 Oktyabrskaya Embankment, formerly owned by PJSC TGK-1 in favor of a certain LLC North-West Center of Expertise (NWCE). The complex, the cadastral value of which is estimated at more than 135 million rubles, went to the organization for only 12 thousand. Why is such a discount?

But on this territory is the state district power station "Red October" - a landmark object for each Petersburger. It was this station that was the only supplier of electricity in Blockade Leningrad. But at one point, it seems, they wanted to erase this memory from the face of the earth - the city authorities for some reason allowed to build around a house 25 floors high. And now the peculiar "ring" around the building has shrunk even more.

In September 2020, this territory was suddenly on the list of territories on which waste sorting stations may appear. Moreover, this was done without too much noise - neither local residents nor municipal deputies were aware of the relevant hearings.

According to officials, the station, with a capacity of 62.5 thousand tons per year, should appear next to the Right-Bank CHPP, located on Oktyabrskaya Embankment, 108 (between the Ring Road and Narodnaya Street). Residents fear that the appearance of MSS will worsen the already difficult environmental situation. After all, the residential quarter of Utkina Zavod is surrounded on all sides by industrial facilities - the Right-Bank CHPP with a warehouse of spent sludge, the Neva industrial zone, large storage complexes and the Ring Road.

The construction of the MSS may well turn this place into an industrial ghetto. As a result, more than five thousand residents of the Narodny MO signed a collective appeal to the Governor of St. Petersburg Alexander Beglov, Russian President Vladimir Putin, State Duma deputies, members of the St. Petersburg parliament, "Fontanka" reported this spring.

And a decision on this territory has not yet been made - according to a press release on Smolny's website, the final decision on the possibility of implementing the project should be determined by the improvement committee. It is not known at what stage of approval everything is now, since the department did not answer the call of The Moscow Post correspondent.

But it is known that on June 22, 2020, KGIOP approved the subject of protection of the identified object of cultural heritage "State District Power Plant" Red October "(CHP No. 5)" located at: St. Petersburg, Oktyabrskaya Embankment, house 108, building 1, letter A. And like this news in the context of the situation should sound positive. It is only with a careful study of the department's order that it turns out that the subject of protection is space-spatial solutions of buildings and facades. In other words, the old "shell" can be filled with almost anything - including a waste sorting station. 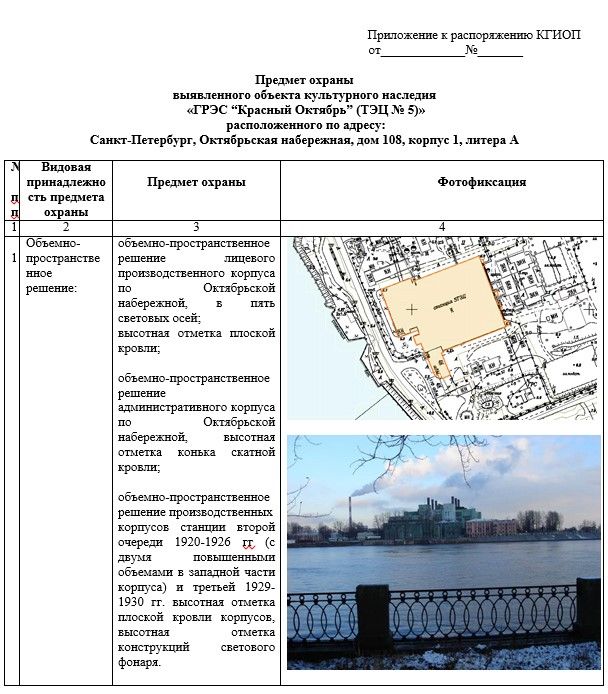 Grigoriev is back in business?

By the way, on the same day, June 22, this object was limited to rent (including sublease). It turns out that only the buyer can use it - Northwestern Center of Expertise LLC. And this company found out in advance what it could do there.

According to the urban planning plan of the site, prepared by order of the KGA company and signed personally by the chief architect of the city Vladimir Grigoryev, the land plot has several dozen permitted uses! Moreover, in this regard, the location of a protected object in this territory is taken into account, which, according to the CGA, does not prevent the use of the territory for the placement of objects, for example, the petrochemical industry, railway transportation services, heavy or light industry. 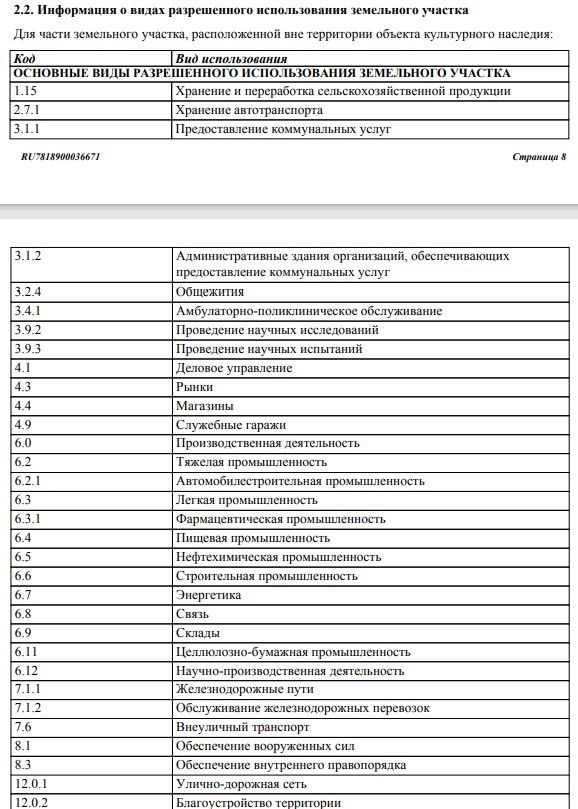 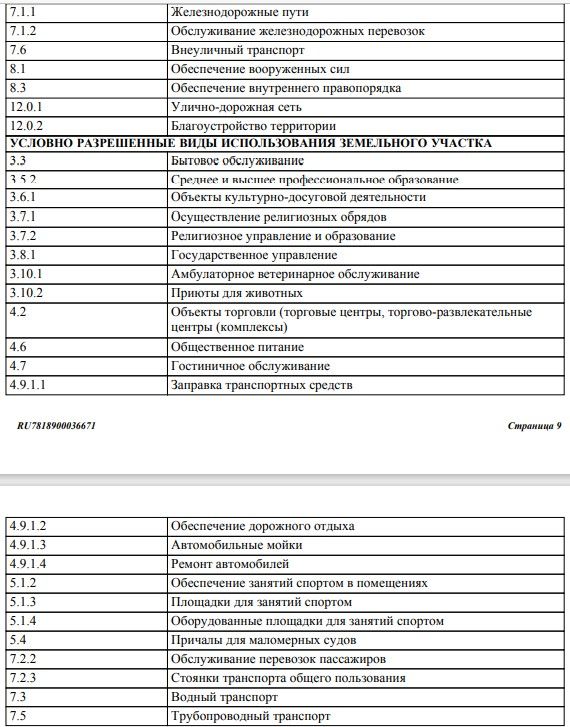 In other words, according to the conclusions of the committee on urban planning and architecture, a waste sorting plant there may well appear. Doubts arise that Mr. Grigoriev listened to the opinion of local residents.

But there are some reasons to believe that it may somehow be connected with Northwestern Center of Expertise LLC, which has signs of fictitiousness - the minimum authorized capital of 10 thousand rubles, only 4 employees, the only founder and leader is a certain Olga Beregovaya. It is also interesting that the official website of the FSBNU NII RINKCE, a state institution controlled by the Ministry of Education and Science, is indicated on "Rusprofail" as the official website of the company. And e-mail is used by several more companies engaged in completely different types of activities and registered at different St. Petersburg addresses.

But here's what's curious. Until February 2019, the founder of the NWCE was a certain Oleg Romanov. The latter also previously led Soyuzpetrostroy-Expert + LLC. And here it is worth remembering that, by the way, the founder of an organization with a similar name, Soyuzpetrostroy-Expert LLC, is Alexander Vladimirovich Grigoryev, the full namesake of the head of the KGA Vladimir Grigoriev.

Moreover, earlier Soyuzpetrostroy-Expert had already fallen into ugly stories. The Project Culture company, once founded by Grigoriev Sr., made a project to reconstruct two buildings of a sanatorium with a 120-year history on the shores of the Gulf of Finland, the Sestroretsky Resort. She also made the architectural and urban planning appearance of the reconstructed buildings, which was then coordinated by Grigoriev himself. And as a result, instead of a sanatorium, an apartment hotel was built. Moreover, as it turned out, the examination of the project was done by Soyuzpetrostroy-Expert LLC. Earlier this was told in detail by The Moscow Post.

All this suggests that in the fate of the territory on which the iconic object for St. Petersburg is located, Mr. Grigoriev plays not the last violin.

But it is unlikely that redistribution of property is now taking place in the interests of the chief architect. In all this history, the trace of another influential person is seen - Kirill Seleznev, who previously sat on the board of directors of the TGK-1 for many years, from the balance of which the scandalous territory left. From 2003 to 2019, Seleznev was the general director of Gazprom Mezhregiongaz LLC. He left this position after the scandal with former senator Rauf Arashukov: now the latter and his father Raul Arashukov (ex-top manager of Gazprom Mezhregiongaz) are in the case of embezzlement of natural gas for 3.8 billion rubles, embezzlement of 747 million rubles under the guise of payment under contracts and payment of salaries to relatives, "Kommersant" wrote.

Nevertheless, Seleznev still works in the gas giant, leading the RusChimAlliance. And here it is worth recalling that in addition to TGK-1, he also sat on the boards of directors of both Gazprom Bank and Gazprom Neft and Inter RAO.

And Oleg Romanov, already familiar to us in 2014-2020, was a co-founder of Cadastral Bureau LLC, which received two contracts for 3 million rubles from Inter RAO-Electric Generation JSC.

And now attention: at the beginning of this year, Petersburg, the Leningrad Region, VTB and Inter RAO registered the company Nevsky Environmental Operator, which should deal with garbage in two regions. That is, the creation of a waste sorting station in the center of the Northern capital can take place precisely in the interests of this new structure.

And it is worth noting how everything competently fits into the deadlines set by the government - the very garbage reform should start in the city on the Neva in 2022. So it is not surprising that it is now that such active movements are taking place in this direction.

If the interests of the Nevsky Environmental Operator really stand behind all this, then it is clear why the head of the KGA paid such close attention to the territory - nevertheless Smolny himself participates in the company's capital. And the appearance of Romanov, probably associated with both Grigoryev and Seleznev, does not seem at all random.

So, nevertheless, the garbage in the Utkina plant is to be?