According to a source in The Moscow Post, the head of Sberbank German Gref may soon resign, and his deputy Kirill Tsarev, whose family earns hundreds of millions of rubles from state contracts, will replace him.

After leaving the Accounts Chamber, Alexei Kudrin, who, like Gref, is called one of the last "Sislibs" in the Russian political and administrative elite, they say that they gave "good" to German Oskarovich. Moreover, almost his entire old team has already "fled."

According to our publication, several candidates are being discussed at once, but Kirill Tsarev, one of the few deputy chairmen of the board who has not yet left the state bank, may become the most likely replacement for German Gref.

About Tsarev, his lowdown and career prospects - in the material of the correspondent of The Moscow Post.

The mass exodus of top managers of the Gref team began after the announcement of a special military operation to protect Donbass. Even then, a number of Sberbank officials, including German Gref, were under Western sanctions. Lev Khasis was not the first to wait for the tightening of restrictions - the first deputy chairman, as it was believed, the second person in Sberbank after the head of the board, Gref.

His departure was sudden for ordinary people not immersed in the topic, because shortly before that he left the post of deputy chairman to head the new holding of the state bank in the field of e-commerce. And only after the "departure" (as it is assumed, in the United States) the public suddenly learned that Hasis could have a serious business in the States with his wife Olga Hasis - the Momentum group.

Whether Herman Gref knew about the business is another matter. But, soon, other top officials began to resign for Hasis. Board members Sergey Maltsev, Alexander Buriko, Natalya Alymova, Bella Zlatkis and many others left the bank.

The head of the structure himself let slip that the reason could be personal SDN sanctions, which imply blocking accounts and assets in the West. It turns out that Gref indirectly admitted that his inner circle could own assets abroad.

Assistance at the expense of the state

Why did he himself seem to have been given the go-ahead to leave? According to our sources, the AP is tired of the fact that he too actively "helped" scandalous oligarchs through the "Sberbank," who are used to very clearly separating their interests from state ones. Or maybe even a radical non-systemic opposition.

This means that German Gref may have serious business interests among these people. And this is difficult to combine with the post of head of the state bank.

The last straw could be the intention of Sberbank to finance the deal to exit the oligarch Mikhail Fridman from the capital of VimpelCom (mobile operator, Beeline brand) in favor of the company's top management. Apparently, Friedman will remain the beneficiary, but he will surely be able to lift some of the Western sanctions. At the same time, the structure had debts of 240 million rubles.

Friedman himself continues business activities in hostile Ukraine. Not to mention the fact that his companies can help the Ukrainian army, destroying our people in the Donbass. After the start of the SVO, the Ukrainian Alfa-Bank Fridman (the other day it was renamed Sens Bank) announced a program to help the Armed Forces of Ukraine through bonuses and direct transfers. And the native of Lviv Fridman himself has repeatedly expressed his intention to help Ukraine in such difficult times.

Gref's assistance to Friedman's structures is clearly not isolated. Perhaps thanks to this, the son of the head of Sberbank Oleg Gref several years ago found a job as a managing director in the investment division of Alfa Group, a A1 to which ill-wishers are trying to attribute unfriendly acquisitions of a completely "healthy" business.

Another person who is difficult to accuse of a high degree of patriotism and focus on promoting the national interests of Russia is Alexander Mamut. In 2020, Sberbank, under the leadership of Gref, helped Mamut a lot, saving him from a 45% stake in the flattened and clearly failing Rambler.

Sberbank simply bought this share, and then all the group's media assets were in the hands of the old associate German Oskarovich, the former deputy head of Sberbank, Sergei Shishkin. How much state money it took - but full. The first tranche alone amounted to 3 billion rubles. Straight manna heavenly for the oligarch Mamut - for what merits?

Now another story is unfolding: at the suit of Sberbank, Glavtorg, the last of the distributors of the United Confectioners holding, Yuri Gushchin, may be bankrupt. After that, Gushchin can get the company - and is Gref acting in his interests? The Moscow Post wrote about this story. 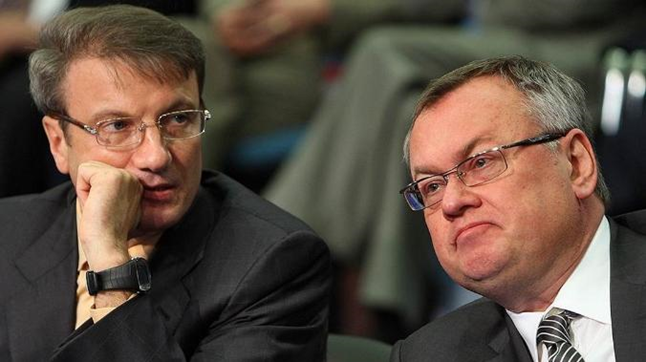 But this still went everywhere against the background of rumors about the possible help of the non-systemic opposition in the Russian Federation. According to the author of a personal blog on the website of the Zavtra newspaper (archival link) Yuri Nresov, allegedly in the past Gref could have been convicted of financing the leader of the Progress Party Alexei Navalny (recognized as a foreign agent, terrorist and extremist on the territory of the Russian Federation).

It looks like a "duck." But if this is true, then neither for the AP, nor for most ordinary people it does not climb into any gate.

Contracts for the family

Against the background of the deputy chairmen outgoing from Sberbank, the young and ambitious deputy chairman Kirill Tsarev remained the "last of the Mohicans." This was surprising: why does he not run from the "sinking ship" under the oppression of sanctions and a bunch of other problems? Now it becomes clear that it was he who could be prepared to replace German Oskarovich.

Whether Tsarev could remain a white raven in the team of Sberbank managers if they could have foreign assets is not clear. But it is known that in Russia, evil Tsareva people are related to a business that feeds on state contracts for hundreds of millions of rubles.

It is difficult to believe that Tsarev has no foreign business. A significant part of his life path is connected with our former Western partners, and by nature he is more likely a businessman than a government official.

Tsarev began to engage in business in his student years in St. Petersburg. After, according to the official biography, he studied and "rose," including at the British London Business School. And then he worked at the Finnish company Baltic-Unit OY, so he should have more than established ties in the West.

After Tsarev participated in the formation of Russian leasing through his allegedly successful startup Interleasing, where the International Bank of St. Petersburg invested. And through long thorns, in 2011 he was "warmed up" by German Gref at Sberbank.

In the structure, he rose to the rank of deputy chairman and chief curator of the ecosystem for individual clients, including such scandalous mortgage lending from Sberbank. And just between these two periods, Kirill Alexandrovich managed to create a whole network of companies, which are now led by members of his family.

By the way, the same Interleasing was liquidated in 2013 as an inactive legal organization (general director - Tsarev, at that time he had long worked at Sberbank. Combined a position in the state bank and a private structure?)

At the same time, the owner of the company was a structure with an absolutely identical name, Interleasing LLC, which is still operating. It is owned by Lyudmila Valentinovna Kogan, the widow of the famous businessman Vladimir Kogan.

But the company at the end of 2021 has revenue of 20 billion rubles, net profit - 685 million rubles. And state contracts have gained as much as 763 million rubles. Moreover, most of it is 114 million rubles, from the administration of the Gatchina district of the Leningrad region, which is next to Tsarev's native Petersburg. 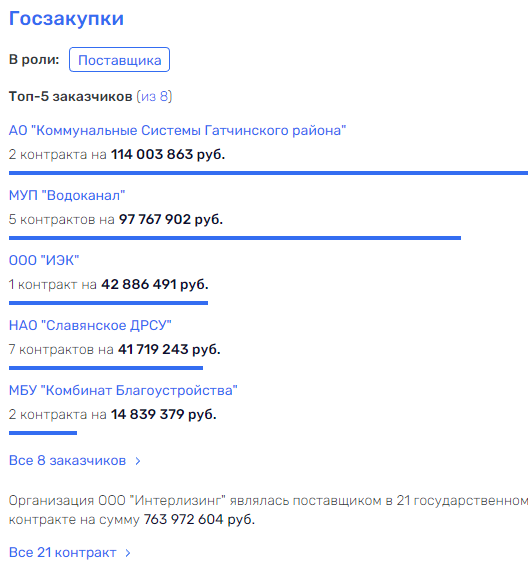 Formally, this has nothing to do with Tsarev. As for other companies that Tsarev co-founded two main family companies: Renthal-Group LLC and Renthal Tech LLC. It is surprising that he left the owners of both structures only in July and April 2022, respectively - that is, immediately after the new round of Western sanctions.

Information that his shares were in trust could not be found. What hints at a possible violation of the Law on Civil Service, because the top management of Sberbank is, in fact, the civil service. The bank is more than half state-owned. Herman Gref did not know this, or tried not to notice?

Now the majority owners of both companies are Anna Vladimirovna Tsareva and Timur Kirillovich Tsarev. As expected - very close relatives of the deputy chairman of Sberbank.

At the same time, something strange happens in the finances of the same "Rent Tech." At the end of 2021, the company's revenue amounted to 245 million rubles. At the end of 2018, it was 417 million rubles at all. But now the net profit of the structure is only 12 million rubles. Do they draw reporting there to pay less taxes, or is profitability really so low? But then businessmen from Tsarevykh with such revenue - not very much.

Tsarevykh has a number of minority partners who can be close friends of the family. When Kirill Alexandrovich left the capital of Renthal Group, Marianna Orlova came in his place.

Among other things, she also acted first as co-founder, and then as liquidator of the non-profit dacha partnership "Tsarevo." And the company of co-owners was made by the couple of Tsarevykh - Cyril and Anna.

She co-founded both Rentals during their registration phase. And until the fall of 2021, she was a co-owner of Vostok shopping center LLC, which sells cars. 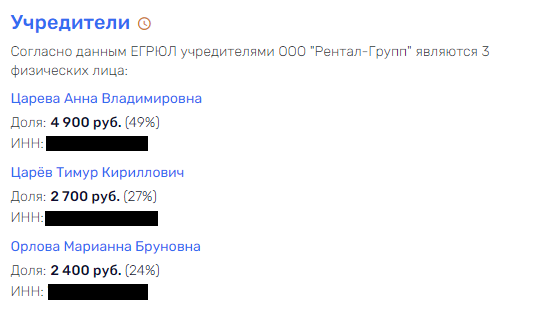 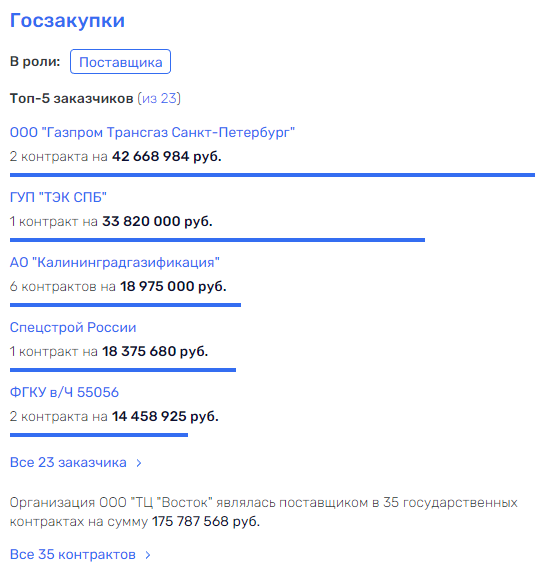 Another 50% of Units is owned by Valentina Igolinskaya. Until 2018, she was the founder of GSI LLC, a company for the wholesale trade in machines and equipment for mining with turnover of hundreds of millions of rubles.

That's just what they say lies on the surface. But even this is enough to understand that following the example of the same Lev Khasis and striving to retreat from Russia to Kirill Tsarev can be very unprofitable. He is also well fed here, and in the chair of the head of Sberbank they will feed even better - after all, he will receive new opportunities and levers for the protection and development of his unfriendly business.

And what about Herman Gref? Here he, just, may well follow the example of Lev Khasis, and, according to ill-wishers, Anatoly Chubais, very close to both of them.

In this case, what to do with Western sanctions against German Oskarovich? They can always be exchanged for confidential information about the finances of the country to which he gave such a significant part of his life...