The interests of German Gref may be behind the purchase of Siemens Finance assets.

This assumption is prompted by the looming connection between the head of the largest state bank and one of the buyers of the asset.

The Insight investment group, owned by the former top managers of EsEfAi of the Gutseriev family, headed by Avet Mirakyan, bought the Siemens finance leasing company from the German concern Siemens.

The latter got rid of business relations with the Gutseriev against the background of adding family members to the sanctions lists, deciding to develop his business separately. To avoid sanctions?

Beneficiaries of the deal to buy Siemens Finance, including German Gref, may intend to withdraw money abroad. The Moscow Post correspondent understood the confusing story.

Former top manager of EmEfAi Avet Mirakyan has managed to visit many banking structures during his life: he worked in Binbank and BNP Paribas, led the practice of consulting services for supporting transactions in the CIS financial markets at EY. At the moment, he is on the board of IDBank (formerly Anelik Bank). According to ArmInfo, Vartan Dilanyan has been controlling it through the FISTOCO LTD offshore since 2016. An entrepreneur with a lot of business interests in Russia and Armenia.

So, for example, he owns the Akstim company, which earned almost a billion rubles on government contracts mainly with banking structures. 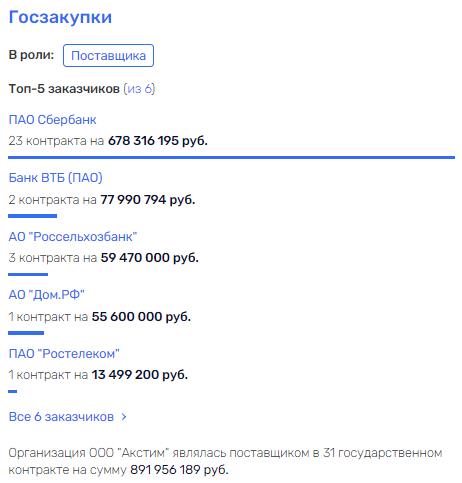 The main customer of the office is Sberbank. Photo: https://www.rusprofile.ru

In addition, Vartan Dilanyan is the managing director of the consulting company Accenture in Russia. Accenture, by the way, also against the background of SVO made some perturbations in its business, selling the Russian division to local management in the person of Dilanyan himself and his partners. Probably to avoid sanctions.

In 2008, Dilanyan acted as a representative from ex-senator from the Belgorod region Vadim Moshkovich in negotiations on the sale of Binbank from Mikhail Gutseriev's nephew Mikail Shishkhanov to Moshkovich. The deal eventually fell through due to the fact that the price did not suit Shishkhanov.

"Binbank," by the way, eventually fell under the reorganization of the Central Bank, and Mikhail Shishkhanov became a defendant in a criminal case on the embezzlement of 107 billion rubles - wrote Kommerasant. Whether Dilanyan had anything to do with this is an open question.

Under him, the story of the Arzni Mineral Water Plant, which somehow came under the control of IDBank, gained its sad fame. Dilanyan himself said that everything was legal, despite the objections of the former owner. This was written by "Tert Hey Em."

On "a short leg" with Gref

Dilanyan, as we mentioned above, represented Moshkovich's interests in B&N Bank in which also Mirakyan worked. So, most likely, these two can be business partners. At the same time it is known that mister Moshkovich, in turn, long ago and densely cooperates with German Gref's Sberbank through the structures. For example, in 2003 Sberbank financed the transaction on acquisition of tractors between Rusagro and the American company Deere & Co. within the Agreement with Eximbank of the USA.

Already then Rusagro was called "the elite client of Sberbank. It is worth mentioning that Moshkovich in 2008 owned a large package (about 1%) of stocks of Sberbank.

In 2010 it became known that Sberbank as the largest creditor, is ready to redeem the most part of shares from Rusagro. In spite of the fact that, according to some experts to whom Vedomosti refers, this transaction isn't absolutely favorable to the State Bank as it doesn't answer the purpose of Sberbank and the interests of its shareholders (an essence of activity of bank — to issue the credits, but not to participate voluntarily in the capital of the enterprises).

The same year Rusagro signed with Sberbank the contract of pledge of a 50% share in the company for providing obligations of Rusagro sugar under credit agreements of 2009-2010 for the total amount of 1.4 billion rubles.

On money of Sberbank Agroinvest – the enterprise which in 2015 from structures of Rusagro passed into private hands developed, and now with all earned billions Rusagro tries to return him to itself. And courts support Moshkovich's company so far, actually nullifying the transaction of seven-year prescription. In detail I wrote "Business vector" about it.

And, successfully functioning enterprise in case of his transfer to a contour of Rusagro, will appear in hands of its going bankrupt affiliated structure of Madin. What will become then with Agroinvest – a question open. Possibly, the trace behind parent firm will go to bankruptcy. Sberbank is prayed for forgiveness, doesn't seek to participate in court though most likely won't wait for return of a debt if the company appears in hands almost of the bankrupt.

It is unclear, why to bank all the same. There is an assumption that mister Gref wants to take part in future possible "razderbanivaniye" of the plant. Also it is aimed at it, and by no means not just at return of the credit from successfully working enterprise.

Financial markets, banks, investments. Government contracts from Sberbank. As a result it can turn out that mister Mirakyan is not so much an independent businessman, how many a link in a chain of interests of the head of Sberbank German Gref.

The transaction on purchase of "subsidiary" of Siemens, according to the experts, could make about 10 billion rubles. "Siemens the finance" steadily increases revenue – as of 2021, that earned 25 billion rubles. She constantly receives government contracts from the large Russian companies on which she earned about 377 million rubles.

So asset very delicious. Taking into account that Sberbank sells assets recently about what we in detail wrote in investigation "On a "chubaysovy" path: German Gref is ready to leave?", there are bases to believe that mister Gref focused on that the earned means to enclose in already own projects.

Even more in this opinion on the described situation strengthens the fact that the Former first Deputy mister Gref Lev Hasis (who is in the USA, presumably, now), worked in consortium with Accenture Dilanyan on implementation of technology of a blockchain in Sberbank. So, the last, most likely, has direct contacts and with the head of Sberbank.

By the way, a surname of both Gref, and Hasis sounded in the juicy scandal - the next publication of offshore documents under the name "Pandora's File" (by analogy with "The paradise file"). Allegedly, on accounts which can be connected with Gref there were about 50 million dollars in Singapore and Samoa. However, also opinions sounded that he could hardly earn such money for all the career.

Meanwhile in network documents in which a certain Mikhail Kokorich seeks asylum in the USA walk. It turned out that Kokorich can be the owner of multi-billion business in the States - the Momentus groups. As follows from the document, available The Moscow Post, Kokorich owns he the company together with Olga Hasis-Finkelstein-Bespechnoy. By the purest coincidence Lev Hasis's spouse (right hand of German Gref) is just called Olga. 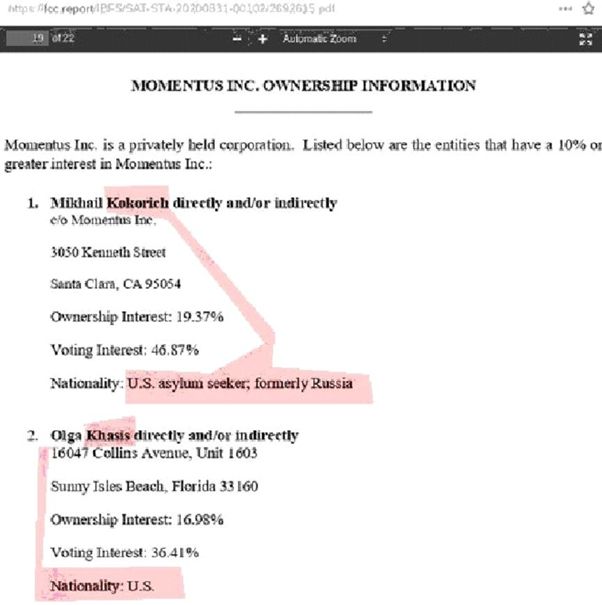 But these are still flowers, because the American website of the company itself indicates that former US Deputy Defense Minister John Rod, as well as the former head of the Pentagon's space development agency, may be related to the group's work.

By the way, if German Gref was preparing the ground so that in case of something, it would be impossible to leave Russia (of course, this is impossible), familiar trusted people could come in handy through the "second hands." As we now understand, he has all the connections and opportunities for this.