For the first time in 40 years, historical objects of the XIX century will be moved for their preservation in Moscow. Such a responsible task fell to Sergey Gordeev's PIK group. But will there be enough power and sense of aesthetics?

As reported by The Moscow Post, the owner of the PIK Group Sergey Gordeev took on an important task of moving the water tower and other historical objects dating from the late XIX century on the territory of the former Borets compression plant  in the Maryina Roshcha. They will be moved and built into the development of the Sheremetyevsky residential complex. It is surprising that such a large-scale project is given, in fact, to a person who has a reputation for  being a businessman with not very friendly methods. Moreover, the media has repeatedly rolled out a wave of publications about the dissatisfaction and pickets of people who opposed the development of the Group's facilities.

However, the company is reassuring. All works will be carried out jointly with architectural bureaus and specialized organizations, and they should be completed by the end of the year, as Interfax reports.

However, as experience with the reconstruction of the territory of the Badaevsky brewery from Capital Group, which is now actively cooperating with PIK, shows, we should look at the project and this very integration into the residential complex. It should be recalled that the brewery was also an architectural value, and the reconstruction project was being approved for two years. At the same time, a lot of people expressed dissatisfaction and pointed out the ugliness of "floating houses".

To understand the toughness and steel grip of the owner of the PIK GC of Sergey Eduardovich, it is important to remember his first business - the company Rosbuilding. Its activities were laconically described in the Forbes publication, it bought stocks of industrial enterprises and converted them into business centres, though it did not stand on ceremony with minority shareholders.

It is worth noting that even RBC in its publications called Rosbuilding - "the largest Russian raider". The publication mentioned that the scale of the company's work in the market of mergers and acquisitions was such that the Mayor of the capital, Yuri Luzhkov, accused it of destruction the industrial potential of Moscow".

However, later Luzhkov had to change his mind about Rosbuilding, of course due to the connections and giving power hand. For example, in 2006, Rosbuilding helped the eye Prosthetics Centre, previously located in the Gazprom office block, move "to a green corner of the capital – Izmailovo, that is more appropriate for a medical institution." The role of sponsorship was also played, and judo tournaments were held on the company's money as Kommersant wrote.

Now Gordeev continues to conduct business harshly: the confrontation with dissatisfied with a particular construction site sometimes ends even with calling the police and prison trucks.

For example, in November 2018, a whole "war" unfolded in the capital's Kuntsevo district. Residents of Akademik Pavlov and Ivan Franko streets held an unauthorized protest action against the point development leading to the PIK GC. According to residents, not far from their five-storeyed buildings, the company began constructing a skyscraper. The action ended with dispersing by the police, the territory being cordoned off by the developer's security company, and citizens being arrested. The report from the scene was conducted by the 360 TV channel.

PIK in a raider manner captured the square, drilled wells there and put piles under the new house. Lawyers did not sleep, filed lawsuits, but PIK also did not stop, actively conducted construction work", - one of the activists said in the report.

There are also recent stories, in February, in the area of "Solntsevo-Park" residents went out on single pickets demanding to keep the promise to build a school. One of the residents told the Novye Izvestia publication that the school was promised to be built five years ago by the developer named Morton, but the company went bankrupt, and it was bought by PIK, along with the obligations of the construction company. PIK planned to build the school in December 2019, but instead began building apartments near the children's clinic. At the same time, it was indicated on the information boards that the school would still be started... in 2020... but when exactly?

Extensive acquaintances and connections allow the developer to operate freely and get special working conditions not only in Moscow but also in the "Northern capital", don't they?

People do not always go for the creation of HСC, some people compare the scheme of work with the principles of financial pyramids building. Some contribute money, others get it on loan. The number of members of cooperatives is not regulated by law, so their increase is in the interests of such organizations. But it should be understood that such schemes sooner or later collapse, because there is no money left to fulfill obligations. Is this what Gordeev is planning?

The change of power in Moscow and the arrival of Sergei Sobyanin, it seems, only increased loyalty to the PIK Group. In 2018, Gordeev's company received almost 50% of orders under the renovation program, marking itself as a leader in this field.

However, last year, the influence seems to have somewhat diminished and the Group got significantly less - 6.5 billion rubles against 34.4 billion received a year earlier, as RIA Novosti wrote.

According to IFRS, the total revenue of PIK Group in 2019 increased by 14.2% to 280.6 billion rubles. And in 2020, the developer plans to increase it by 43% to 400 billion rubles. More than 80% of the profit comes from real estate sales. Net corporate debt is declining and now represents 1.9 billion rubles.

It is curious how connections, probably, help to deal with the debt obligations of the GC. Not so long ago, Sergey Gordeev agreed with the Trust to settle obligations for as much as 10 billion, attracted for the construction of shopping centres near Moscow. Before this, the Bank had obtained collection of this amount from the Ekvilibrium company, previously owned by Gordeev, in court.

Debts of the former Gordeev's companies to Trust consist of two parts — defaulted bonds of Ekvilibrium for 10.6 billion rubles, and loans for the construction of the Riviera shopping and entertainment centre of the same company, to 42.6 billion rubles. The agreement concerns  Ekvilibrium's debt, according to RBC.

However, some experts believed that this is allegedly only a temporary "injection" to delay the inevitable collapse of the businessman, because such a sum is hard to pull.

It is not clear how the story with the transfer of the water tower will end. The company noted that the Sheremetyevo project is the first in Moscow for the last 40 years, in which the historical architecture of the residential complex will be integrated into the modern: the tower, facade elements and workshop will be carefully and neatly integrated into the development of the neighborhood.

However, the story of the Badaevsky plant (production was stopped in 2006) comes to mind. In 2018, Pavel Te's Capital Group presented a plan for the reconstruction of the enterprise's territory on the Taras Shevchenko embankment. It was supposed to erect new buildings over the old workshops of the plant - on 35-metre columns. 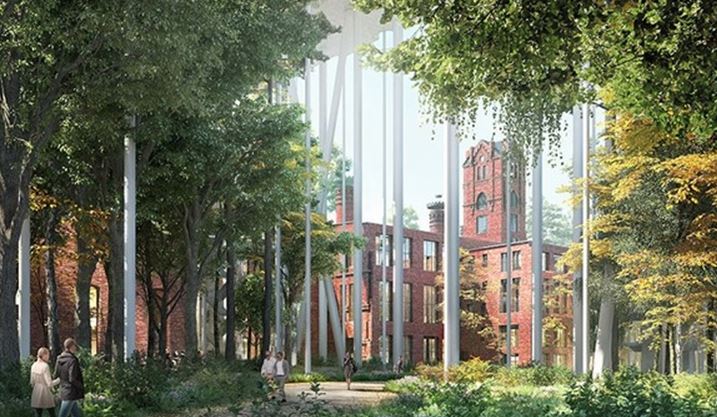 It is noteworthy that the Taras Shevchenko Embankment is a large architectural ensemble, in which the oldest building is a three-hill brewery - a monument of industrial architecture of the 19th - early 20th century, the Novye Izvestia publication wrote.

There were a lot of questions towards the project. Evil tongues said that it was disfiguring the ensemble. It was only in July this year that it was finally approved. Historical buildings will be restored, and investors will build "floating houses" behind them, Rossiyskaya Gazeta reported, citing the words of Moscow's Chief Architect Sergei Kuznetsov.

It is noteworthy that Sergey Gordeev looked at this ensemble before the Capital Group but something did not suit him in this venture, or could the "giants" of the construction industry decide to agree?

It turns out that this is true. Vedomosti reported that PIK Group became a partner of Capital Group on two major projects for the construction of residential complexes on 446,320 sq. m. in the Signalny Proezd and on 407,900 sq. m. on Amurskaya street. PIK acts as a fee-developer (management for remuneration) of these projects.

In addition, there is a similar scheme of interaction of Capital Group with the projects of Lublinsky Park on Lublinskaya street and Mikhailovsky Park near Ryazan Avenue residential complexes.

Time will tell how successful the new idea with the transfer of historical objects for the PIK Group will be. But taking into account the responsibility of the task and the reputation of a tough developer, discontent from the public can quite be expected.