Gas and luxury of Ivan Sibirev

Gazprom top manager Ivan Sibirev has built a career in the gas giant, thanks to influential business partners, and now he is chic for hundreds of millions received by him in a state corporation?

According to The Sankt-Peterburg Post, Gazprom Promgaz JSC filed a lawsuit against Gazstroyprom JSC in the amount of more than 122.8 million rubles. The plaintiff company is the design institute of the gas giant, and the defendant performs a full range of work as part of the implementation of Gazprom's infrastructure projects. Until recently, Gazstroyprom was headed by Ivan Sibirev, who at a young age built a successful business with his daughter Marina Entaltseva, who worked for a long time in the AP. She, like Sibirev himself, is considered close to Alexei Miller.

Gazprom Progaz is also led by a "veteran" of the industry, Nikolai Storodsky, whose son is engaged in the banking service Revolut and works closely with the scandalous Qiwi. What could not be shared by Sibirev and Storodsky Jr.?

In Gazstroyprom, Mr. Sibirev stayed for a short time - he came there at the end of 2020, and already in March this gave way to Nikolai Tkachenko. It is likely that he was only a buffer figure - perhaps they wanted to cover up the scandal associated with the departure of Stanislav Anikeev from this post. The dismissal of the latter coincided with the loss by the company of one of the most iconic and expensive orders - the decoration of the Lakhta Center in St. Petersburg. As Business Vector wrote, Miller personally was behind these events, tired of waiting for the completion of the construction of the image project.

There is talk that Sibirev himself was not very interesting as the head of the Gazprom mega-contractor. He earned so well, leading Stroytransneftegaz - according to the Version, only in 2019 he received 665 million rubles from the company - that is, he is "dripping" almost 2 million daily! And this is not his only source of income: the entrepreneurial Sibirev is listed as the head of six companies and owns twelve. And here, too, everything is very interesting.

Many talents of a young top manager

Sibirev is engaged in construction, trade and restaurant business. At the same time, the latter, he was carried away for a couple with Svetlana Kuznetsova, who nee bore the surname Entaltsev. Svetlana's mother is the same Marina Entaltseva who goes to the rating of "100 most influential women of the Russian Federation." The latter is considered close to Alexei Miller - if you drive their names in the search engine, he will give out more than a hundred of their joint photographs from both official events and private archives.

Kuznetsova and Sibirev became co-owners of Vine End Crab St. Petersburg LLC just when Sibirev was appointed general director of STNG. Is it possible that the business partner "pulled" him to a high position in the gas giant?

By the way, Svetlana Kuznetsova's husband Alexander Kuznetsov is also a very promising person in terms of friendship. He still works in the same gas empire as the head of Gazprom-Complete LLC and GSP-Complete LLC, as well as deputy general director of Gazstroyprom JSC for logistics.

By the way, through her, Sibirev may have access to another influential person - Polina Yumasheva, daughter of ex-presidential adviser Valentin Yumashev and ex-wife of billionaire Oleg Deripaska. Together with Kuznetsova, the latter last year established SPb Bureau LLC, which manages an elite beauty salon in St. Petersburg. The company in this case is made up of a secular lioness Svetlana Bondarchuk and Natalya Dubovitskaya - the wife of Vladislav Surkov, ex-presidential aide. It seems that Sibireva is drawn to the "stars." 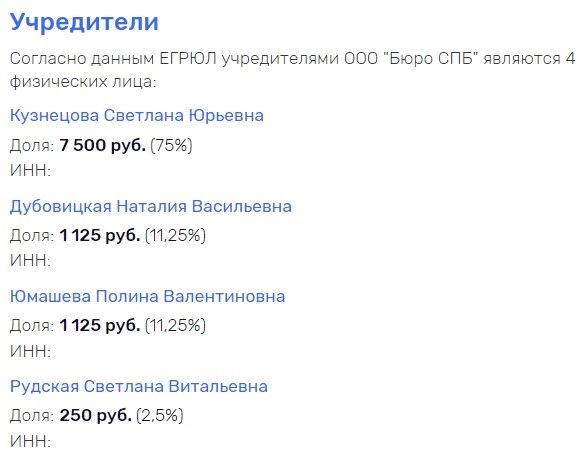 And Sibirev himself is also not a miss, he knows how to go out to the "right" people. In particular, he was once engaged in a restaurant, but later sold his share to Alexei Repik, chairman of the board of directors of R-Farm JSC. The latter is considered close to Deputy Prime Minister Tatyana Golikova, about which The Moscow Post previously wrote in detail.

See, such solid "garter" and helped him build such a successful career at a young age - now he is only 39 years old. They say that the businessman likes to boast that he was personally hired by the chief himself - Miller, and also emphasizes a special relationship with the head of SIBUR Dmitry Konov, who is allegedly a frequent regular in his restaurants.

Perhaps that is why, as they say, Sibirev does not very often delight colleagues with his presence and appears in his workplace. According to his wife's Instagram, several times a year they are in such expensive resorts as Nice and the Maldives.

According to the Rosreestr Real Estate, Ivan Sibirev owns a land plot of 1.1 hectares in the area of ​ ​ the elite Rublevka - in the country village of Uspenskoye. The cadastral value of this object is almost 100 million rubles, on it Sibirev built a luxurious cottage with an area of ​ ​ 300 "squares." Gazprom's top manager has several apartments in St. Petersburg, including on the "elite" Krestovsky Island. He moves on luxury cars: the Mercedes AMG GT | S sports car worth from 11 million rubles, the Mercedes S400 4MATIC executive sedan (12 million) and the Porche Macan Turbo premium crossover (from 7 million). Another vehicle registered in Sibirev's property is the 12-seater Chris-Craft Launch 28 GT pleasure boat, which can be bought for only 235 thousand dollars.

What to say, Mr. Sibirev definitely loves luxury. But he clearly does not like when they talk about it. As the Sobesednik.ru wrote, Sibirev's surnames magically began to appear in search engines, and the news itself in no way concerned him, but were "viral." In particular, his name appeared in the news about the problem of laying pipes, about self-insulation, about checking Moscow technology parks, about safety during the pandemic. COVID-19 Programmers say that in this way, ten years ago, it was still possible to supplant the undesirable publications for the hero from the results of issuing search engines, at least from the first positions. Bots are used to host articles containing a viral insert. Having organized the "attack" of bots, Sibirev wanted to "displace" unwanted news about his person?

However, thereby, he seems to have done only worse - according to Rosbalt, after all these misunderstandings in the information field, State Duma deputy Tamara Pletneva asked to check Comrade Sibirev for compliance with ethical standards of behavior and lack of conflict of interest, taking into account the fact that Sibirev, being the top manager of the gas giant, also owns a personal business.

All the same in the arena

According to the file cabinet of arbitration cases, Gazprom Promgaz JSC filed a lawsuit against the structure once headed by Sibirev. The latter is led by Nikolai Storodsky, who since the late 90s has been working in the structures of the gas giant. His son, Nikolai Storodsky Jr., is engaged in the fintech startup Revolut, a banking service that also deals with cryptocurrencies aimed at tourists and expats and represented abroad. The latter is closely related to the Qiwi service - in 2018, plans were announced by a foreign office to enter the Russian market using a Kiwi Bank license. Earlier this was told in detail by The Moscow Post.

Earlier, the company was involved in a scandal with illegal operations. As reported by The Telegraph (recognized as a foreign agent in the Russian Federation), the organization for three months turned off the automatic system created to block dubious operations. As a result, thousands of transactions passed through the digital banking system of a startup in London without full verification for compliance with sanctions. That is, Nikolai Storodsky Jr. may be involved in a certain "washing" scheme.

By the way, at one time, according to Forbes, the startup Frontsky Jr. "charmed" German Gref. A lot of money was poured into Revolut. In 2018, $250 million was invested in the project. The investor was the fund DST Global Yuri Milner. The latter is known as a defendant in the so-called "Paradise dossier." According to him, one of the main investors in DST was essentially Gazprom Investing Holding, Vedomosti wrote.

By the way, after the fintech startup received solid infusions in the structure of the gas giant, a huge loss of almost 250 million rubles was formed. And all this does not seem like a simple coincidence.

It turns out that on both sides, which will soon meet in court, there are solid business interests. In the meantime, the details of their upcoming proceedings are not disclosed, it remains only to be assumed - could there be such a thing that Sibirev and Frontsky Jr. could banally not share something? For example, gas budgets that would like to "pour" into their own enterprises.