The Central Bank several times posted on its website the same document with different forecast indicators. Oil there is worth $55 per barrel.

This week, the Central Bank posted a document on the main directions of monetary policy for 2020-2022, approved in October 2019. The document contains a “risk scenario” that assumed oil prices at $ 25 per barrel. With what goal was the document posted again? Correspondent of The Moscow Post tried to figure this out.

The reason for the re-posting of the document, apparently, was the publication of the "risk scenario", which the journalists remembered, since it could become the base one for Russia. At some point, the document disappeared from the Central Bank’s website, but The Moscow Post has a version of it stored in the archive .

Apparently, instead of economic forecasts, the head of the Central Bank Elvira Nabiullina is engaged in "fortune-telling". Not only do the different scenarios exempt from any responsibility for forecasts, as it turned out, they still do not have indicators important for the economy. But , the data of the Central Bank of the Ministry of Finance uses them for its calculations, including the budget of the country of Russia.

The forecast that the Central Bank made several years ahead had nothing to do with reality. Now these figures look like they are from a realm of fiction or a part of an inflamed imagination. 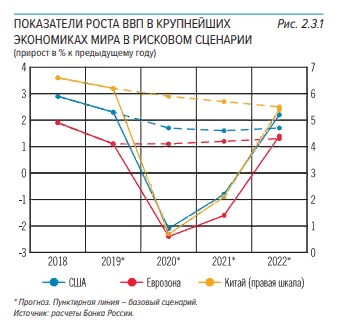 However, before this, Russians expect annual inflation to rise to 6.5-8% with the expected 3.3-3.7% in 2019 when forecasting, but already in 2021 it is expected to drop to 4%, that means, it will take only one year to suffer, and then the forecasts drawn by the Central Banks will come true. Something in all of this is hard to believe in.

In general, even in the worst scenario, the Central Bank’s “predictors” considered that the Russians would only have to tighten the “strap” on their belts for a year, and then everything would go according to plan. And this despite the fact that the growth of the dollar, on which the price of many goods depend, was not taken into account at all. Was solvency of Russians and accordingly, their welfare not taken into account?

It seems that the "risk scenario" was written not by a competent economist, but by a bank clerk who was instructed to mitigate risks as much as possible from the information posted in the supposedly "risk scenario". So it turned out that the negative development of events seemed to be foreseen, but it would not last very long and everything would again be as the Central Bank analysts predict.

Many telegram channels and Internet portals published shocking information about the Central Bank’s “risk scenario” last week. As it turned out, it has nothing to do with reality, but is a “reprint” of the allegedly certain secret full version of the scenario, in which specific numbers were allegedly indicated.

Some did coincide- the price of oil, inflation, GDP. But besides this, they wrote that Russia in terms of export revenues will return back to it’s 2005 revenues, and, will receive $ 240 billion against $ 415 billion. Import volumes will fall by 28% to $ 177 billion - at least since 2006. The state will lose $ 38 billion of foreign exchange reserves. And most importantly - the dollar will be at 94 rubles. All of this information could lead the Russians into a stupor.

According to rumors, then in October 2019, Elvira Nabiullina herself could spread fake information, who did not want the National Welfare Fund (NWF) to print. The head of the Central Bank believed that such a step would lead to higher inflation, without having any effect on economic growth.

Given that the funds of the NWF were planned to be directed to social support, the position of the head of the Central Bank looks, at least, unsightly. Is she, as the "mean knight"  ready to protect state bins, depriving those in need of cash assistance?

Documents posted on the site with a difference of almost 5 months do not differ from each other. However at the end there is a "List of changes." People might think that they were introduced on March 22. However, this is not the case.

The repeated placement of the document may be related to drawing attention to the “fake” information about the growth of the dollar exchange rate to 94 rubles, allegedly indicated in the secret version of the “risk scenario” of the “Main directions of monetary policy”. A man comes in to check, and there is no dollar price there. However, there are similar numbers, which means that there may be "secret" ones. But, Central Bank, why do we need this?

The fact is that on March 19, the Central Bank began selling foreign currency from the NWF with the aim of converting it into rubles for the implementation of a transaction to purchase Sberbank. Does this mean, that the Central Bank is interested in the rush demand for currency?

Oddly enough, in this case, the goals of the Central Bank and bankers coincide. In the conditions of a sharp jump in the dollar, the spread (difference) between the sale and purchase prices of the currency increased. If in a stable situation the difference is 1-1.5 rubles, now some banks are buying foreign currency at 75 rubles, and selling at 86 rubles. And, probably, they take it against the background of information about the "risk scenario" and the dollar for 90 rubles.

A week ago, the head of Sberbank German Gref spoke about the most negative situation that his employees modeled. The price of a barrel of oil is $ 20, and a dollar is 100 rubles. Even at such prices, the bank will be able to comply with all the Central Bank's liquidity and capital adequacy ratios. Did Gref set a new benchmark for the dollar?

After a statement by the head of Sberbank on March 17, the dollar went up sharply, jumping from 73.8 rubles. until 80.1 on March 19th. Maybe, our liberal economists skillfully use the shocking situation for many Russians for their own purposes?

Over the past two days, the dollar fell by 3 rubles. And this may not fit into the plans of the head of the Central Bank, Elvira Nabiullina. Lower price - more dollars must be sold from the NWF. Will information about a top-secret "risk scenario" of the Central Bank appear soon on the Internet?