The court in the lawsuit of the ex-employee of the DIA turned into a discussion of her "intimate life."

In the Petrograd District Court of the Northern Capital, on the eve of the trial continued between the ex-employee of the DIA Yulia Medvedeva, and journalists of The Moscow Post.

However, the dry process has become similar in theory to the place for "piquant" sharpness. Instead of the proceedings, in essence, at the meeting they tried to discuss the details of the personal life of the former employee Yulia Medvedeva. At least the presented linguistic expertise from the specialists recommended by her more resembled a "love affair," where the plaintiff presented herself as the main character. It is noteworthy that the conclusions obtained as a result of the so-called "examination" are based on a fairly original interpretation of well-known concepts (such as "close relationships"), and in the article itself, the expert saw no much or little sexual context!

Experts paid from the budget by ex-DIA employee Yulia Medvedeva are trying to attribute to journalists opinions that they did not express. In particular, they decided that our correspondent composed the former civil servant in "mistresses" to two employees of the agency at once - this is how the phrase "close relations" was interpreted. This confused the court, which ordered a re-examination.

Recall that the stumbling block was the material "Financial Triangle on the basis of the DIA", which tells about the activities of the ex-adviser to the head of the DIA and concurrently the ex-director of the expert analytical department of the agency Yulia Medvedeva. In the material, Medvedeva's personality appears primarily in the professional sphere, that is, her personal life of the correspondent did not care a drop - in the end, everyone has the right to arrange their happiness in this regard, as they want. By the way, the material was published in the section "Economics," which directly indicates in what context the labor activities of civil servants Medvedeva were considered. Already former - Mrs. Medvedev has already left the DIA. But, it seems, is preparing to become it again - for this it cleans up information about itself on the network?

Against The Moscow Post, Ms. Medvedev attracted experts from ECC SevZapExpert LLC who were probably familiar with her work in the DIA. That is, we did not give her a connection to work with old comrades from the Law Vector? But she is trying to connect companies with which she may have long-standing ties to the lawsuit. And, tellingly, they were all involved in some questionable situations. But this is a little lower.

As for the examination, "specialists" from LLC ECC SevZapExpert claim that under the "Financial Triangle in the DIA," one should mean the love intimate relationship of Agency employees. In particular, Ms. Medvedeva and one of the leaders of the DIA, Deputy General Director Andrei Melnikov. 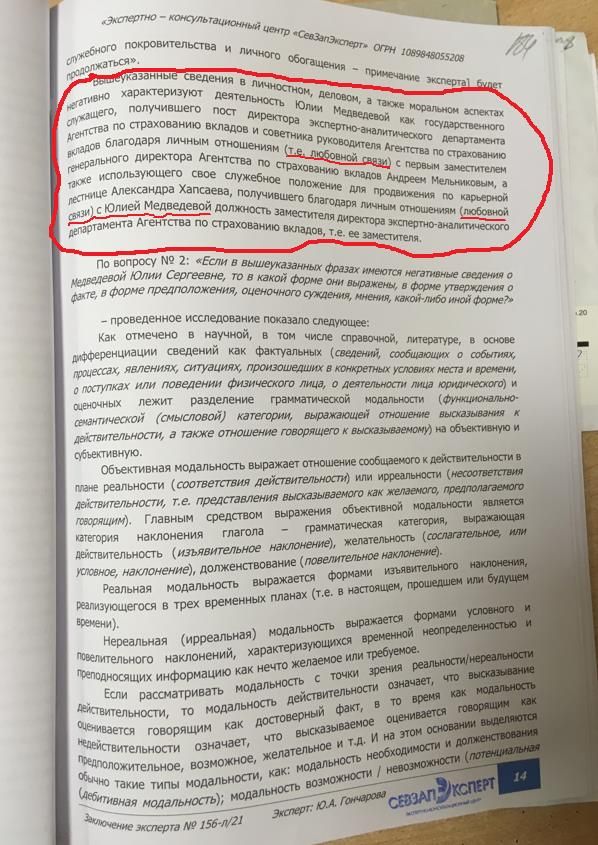 The expert's fantasies do not end there. Next, the expert concludes about the love affair of the plaintiff and deputy director of the expert analytical department Alexander Khapsaev. 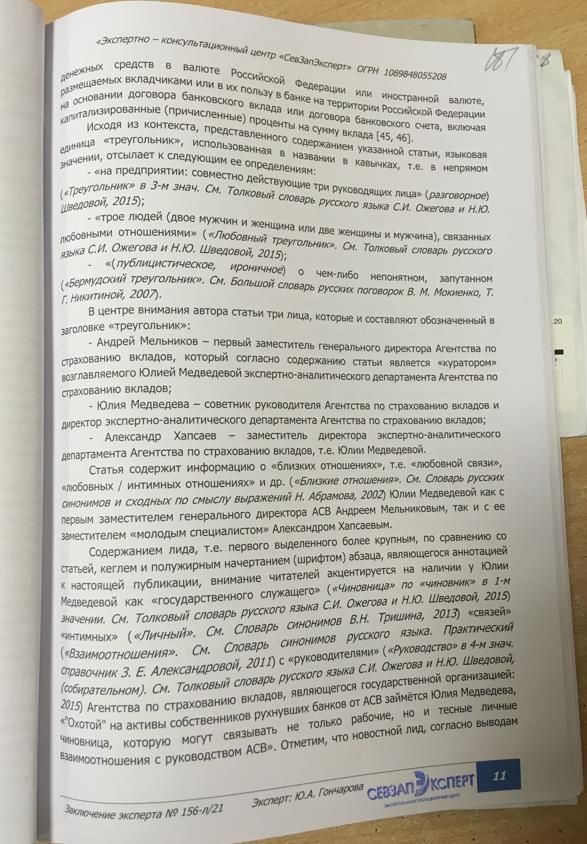 But you do not need to be a specialist linguist to conclude that the article posted by The Moscow Post in the Economics section on the activities of the Deposit Insurance Agency has nothing to do with the fantasies described by the expert.

"It is difficult for me to call what was submitted to the court an examination. This is rather an example of how one can turn expert research, which is regulated by an entire federal law, into something similar to a presentation of one's own fantasies. The fact is that almost on the first pages of the examination it is concluded that close relationships are necessarily love and intimate. But close relations can be between friends, relatives, "said Alexander Changli, lawyer for The Moscow Post.

This circumstance also confused the court, which appointed a re-examination - of course, with another specialist, and in another organization.

And such a decision may not be in Medvedeva's hands, because in the case against independent journalists, she seems to have decided to rely on old acquaintances from ECC SevZapExpert LLC. This company may have long been known to our heroine, because it participated in court cases, including with the participation of the DIA, about which The Moscow Post wrote in detail. 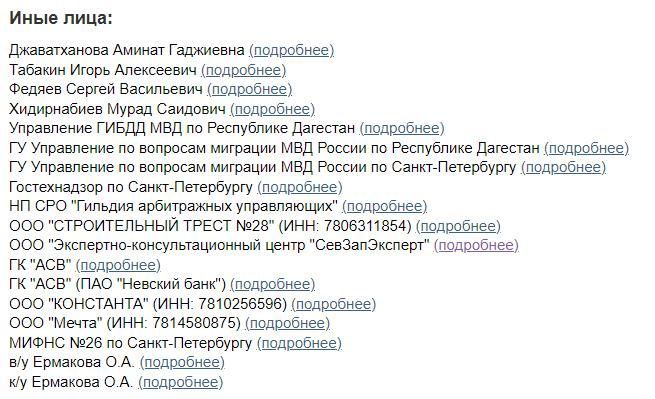 And she was not confused by the ambiguous reputation of the company. According to the database of judicial and regulatory acts of the Russian Federation, at one time LLC ECC SevZapExpert began to fight for its honor and dignity with Solntseva Svetlana Yuryevna, lawyer of the Law Chamber of St. Petersburg. She submitted a petition in one of the proceedings, in which, in the opinion of the ECC, she provided inaccurate information about the Company. In particular, it stated the following: "LLC ECC SevZapExpert" is a place for throwing garbage, for pouring garbage. "

But the company's claims according to this thesis were not satisfied - the Arbitration Court of St. Petersburg and the Leningrad Region refused to satisfy the claims. So, the instance admitted that the above information is quite reliable? 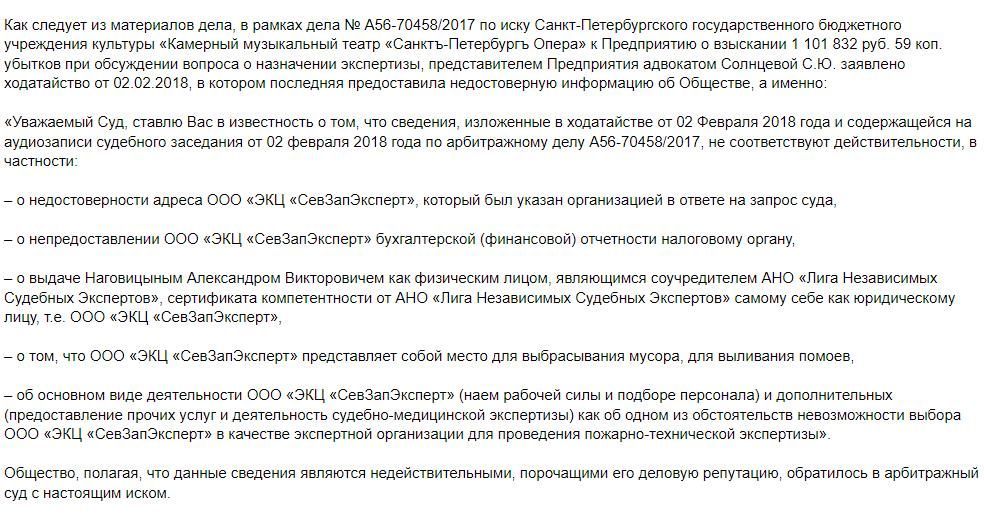 Well, in this case, it is clear where the legs "grow" from such a stormy fantasy of ECC specialists. So they "naphantasized" the posts of experts for themselves?

But if all this is true, then why did Medvedev decide to cooperate with such a company? It seems, indeed, by acquaintance. And this assumption is also supported by the fact that earlier the ex-DIA employee was already seen working with companies that may be well acquainted with her. We are talking, in particular, about the "Vector of Law," from whose domain at one time a pre-trial claim came to the editorial board of The Moscow Post.

With the "Vector of Law" several signs of the company's affiliation with the DIA were discovered - several immigrants from the agency can work in it at once, from which the organization also receives multimillion-dollar orders for the right to provide services to accompany bankruptcy procedures. And she began, by the way, to receive these orders even under Medvedeva, who worked as director of the DIA Expert and Analytical Department, and then suddenly became a client of the Law Vector.

In addition, in April 2021, a certain Belov Alexei Sergeevich appeared in the founders of the "Vector of Law." On the official website of the DIA, a person with this name is listed on the Expert Analytical Council. 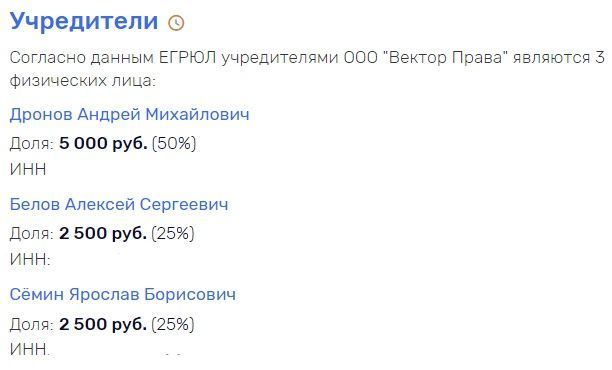 Another founder of the "Vector of Law" was Andrei Dronov. The Moscow Post spoke about his strong ties with Troika-D Bank, which is associated with the career and adviser to the directorate of the law firm Vladimir Akaev. Akaev, in turn, was called by RBC a friend of the former deputy head Valery Miroshnikov, who left Russia in the summer of 2019 after FSB colonel Kirill Cherkalin was detained. Now the investigation is checking Miroshnikov for possible involvement in creating a special condition for the ex-owner of Ugra Alexei Khotin.

Miroshnikov was replaced in his post by Andrei Melnikov, already mentioned earlier, with whom experts with whom ECC SevZapExpert LLC "invented" Medvedeva's real novel.

On land and at sea

However, after the publication of The Moscow Post, which spoke about the ties between the Law Vector and the DIA, Medvedev rebuilt: she began to cooperate with the famous law firm in the field of maritime law "Remedy." The former DIA employee found a company close to the insurance market, seemingly not formally connected with it. But the "strings" from it lead to a whole galaxy of dubious insurance companies.

The Moscow Post wrote that the general director of Remedi is Andrei Suprunenko, who also holds the post of chairman of the Section for the Legal Support of Maritime and River Activities in the Maritime Council under the Government of St. Petersburg. Among the functions of the section is also the "Improvement of the regulatory framework for maritime and river activities." It turns out that Mr. Suprunenko can influence the adoption of relevant regulatory acts. It's not his first time working in a bunch?

It seems strange that lawyers specializing in maritime law suddenly began to represent the interests of the former DIA employee Yulia Medvedeva. The veil of secrecy can open other assets of Suprunenko and his partners. The general director of Remedi has four more companies: the Admiralteyskaya Bar Association and the Remedi Law Agency LLC engaged in legal activities, as well as ASP Narva Gate LLC, whose profile is "Activities of insurance agents and brokers." And it is on the latter that it is worth dwelling in more detail.

The official website of the company indicates that it has been operating in the insurance market of the Russian Federation since 2000. But the company does not work on its own, at least the mention of the Narva Gate ASP itself in the register of insurance brokers of the Central Bank could not be found, the company is only an insurance agent of AMT Insurance, whose profile, by the way, is also marine.

And there are some reasons to believe that through the "ASP" Narva Gate, "a team of legal insurers can implement some problematic schemes. So, on the official portal of ASP Narva Gate, company specialists are represented, among which a certain Sergey Derevyankin attracts attention. A person with the same name owns an IP, as well as Insurance Broker Navegar LLC liquidated in February of this year. The latter company specialized in auxiliary activities in the field of insurance and pension provision.

At the same time, the legal address of the organization - the city of St. Petersburg, Nevsky Prospekt, 40-42 - coincides with what Remedi and ASP Narva Gate had until 2016.

There is another entertaining IP - IP Pushkarev Yuri Andreevich. The same name and surname is with the deputy director of the Narva Gate. And this IP even has one state contract dated May 2016 from GSK Ugoria JSC, which is associated with the Rossium company of Roman Avdeev. The latter rarely cooperates with random people and is considered close to the head of Rosneft Igor Sechin. What connections loom at the St. Petersburg law firm!

But why did not go to her in a row, but probably to her affiliate IP? Maybe the answer should be found in the gaps in tax legislation. The fact is that LLC pays income tax on the general tax system, and IP pays income tax on individuals. The standard income tax rate is 20% and personal income tax is 13%. It is possible that contracts are concluded with individual entrepreneurs, and then implemented through the Narva Gate.

It seems somewhat suspicious that around Yulia Medvedeva, who began to sue independent journalists, so many companies gathered, noted in strange stories and connections.