Everything in Khovrino: Sergei Sobyanin "launched" Arsen Kanokov to the terminal

Senator, former President of Kabardino-Balkaria Arsen Kanokova with the help of Alexander Kakhidze can make good money, on a significant infrastructure project in Moscow.

Former top manager of Russian Railways, general director of the Fininvest group Alexander Kakhidze is going to invest about 5 billion rubles in the construction of warehouses with an area of ​ ​ 100 thousand square meters. m for the Khovrino container terminal, which he, together with people close to Kanokov, owns this object through LLC LKS.

Earlier, Moscow Mayor Sergei Sobyanin announced the significance of this project in terms of the "freight transport framework" of the capital. The Moscow Post correspondent figured out which hands were part of the responsibility for the implementation of the city's plans.

As the correspondent of The Moscow Post managed to find out, Mr. Kakhidze may be associated with the former president and current senator from Kabardino-Balkaria Arsen Kanokov (who, by the way, was not so long ago accused of trying to unfriendly absorb the largest furniture center in Europe "Three Whales").

In general, Kakhidze is a rather "prolific" entrepreneur. At different times, a total of 22 firms were registered for it. A couple of them, the Novosibirsk Transport Terminal and the Yekaterinburg Transport Terminal belong, in addition to Kakhidze, to the legal entity Tandem LLC. This office, in turn, is 100% owned by Alliance Corporation LLC, the founders of which are Zhanna Matveeva and Ekaterina Larionova.

Matveeva is the former general director of the now liquidated CJSC TFD Centrocredit. According to Daily Storm, for a long time CentroCredit Bank was part of the multidisciplinary holding Sindika and the Kanokov business empire. The publication calls Matveev a top manager of the bank.

According to Banki.ru, CentroCredit is in a negative position regarding profitability. Which is based on the level of -3.5 million rubles.

Over the past year, the bank has seriously "sagged" in terms of cash, financial instruments, attracted funds, and in general in terms of the number of assets. In May of this year, Expert RA downgraded the bank's rating due to the sale of a significant part of the securities portfolio and a negative revaluation of the securities remaining on the bank's balance sheet. This led to losses to CentroCredit at the level of a third of its capital. 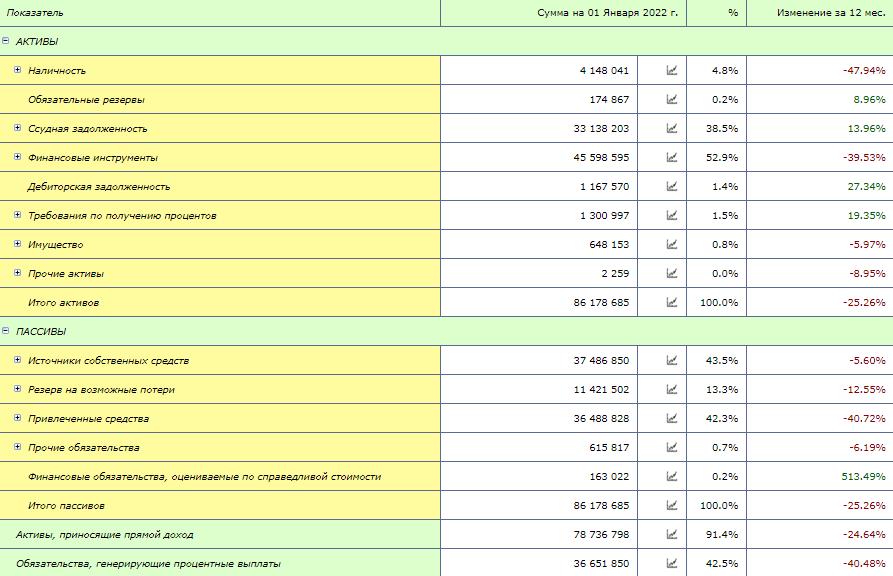 A visual demonstration of the bank's decline in 12 months. Photo: https://analizbankov.ru

In the same period that the bank's rating was lowered, the bank's CEO Andrei Tarasov hastily moved to London. There is reason to believe that abroad he decided, among other things, to hide from the likely criminal prosecution.

It is known that in 2005 Andrei Tarasov became accused in criminal case No. 152030 for tax evasion in the amount of 4.3 billion rubles. In 2010, CentroCredit and the online store Holodilnik.ru appeared in the story of taking out a loan secured by goods not belonging to it. In this way, the money of the bank could simply be laundered, which, by the way, in 2013 became one of the beneficiaries of the Refrigerator. There is information, including that the owner of the online store gave bribes to officials.

And still, her profit was a hundred times less than the debt. Perhaps the money flowed offshore, to which the legal entity "Refrigeration" (LLC "Edil-Import") is tied, which (at least in the past) "CentroCredit."

In 2018, the Central Bank filed claims with CentroCredit regarding non-compliance with the law on countering the laundering of proceeds from crime.

We doubt that Mr. Tarasov did not participate in all the above events. Like Messrs. Kanokovs, who may in fact still be beneficiaries of the bank.

It is important to note that CentroCredit worked quite closely with Russian government agencies. In addition, he owns quite large shares in the capital of a number of companies, in particular Norilsk Nickel, Aeroflot and Sberbank. Surely all these "buns" went to the bank not for its transparent activities. Rather, someone's political influence may work here.

It is possible that we have not listed all the stories that cast a shadow over the top managers and owners of CentroCredit. At least it is reliably known that many articles that negatively covered the activities of this monetary institution have disappeared from the Internet. For example, according to the authors of the Rucompromat website with reference to the material of the Versiya newspaper (now removed even from the web archive), allegedly lawyers of Edil-Importat LLC (the owner of the Holodilnik.ru) tried to censor publications in which the author, expressing his opinion, revealed not the cleanest ins of his business. Journalists from The Moscow Post also wrote about other cases of removal of materials, including those related to the criminal past of Andrei Tarasov.

No matter how hard you try, trying to hide the truth only gives rise to an even greater emphasis on it. And the political influence here is irrelevant.

In addition to the bank, Kanokov is credited with owning the Kinodanz film company, which attracted the attention of the press by filing a lawsuit against blogger Yevgeny Bazhenov. The latter criticized the picture "Beyond Reality," which the owners of the company did not like.

Filming was carried out by the Kay DI Studios company, which at that time was 90% owned by Evgeny Melentyev. In his possession, including Centrokino LLC, which also belongs to Spectrplus, designed for the well-known Tandem, the ultimate beneficiary of which is Ms. Matveeva.

Melentyev also owns Sidge-K. In the list of founders there is a certain Anna Danilina. According to the Daily Storm, this girl conducted a joint business with Timur Kanokov, a relative of Senator Arsen Kanokov.

The Lesresurs company is registered for Anna Danilina. The first large-scale transaction attributed to Danilina is the acquisition of 7600 railway platforms owned by RB-Group, in which Alexander Kakhidze is the chairman of the board of directors. And here we again see that the latter can act in the interests of Kanokov.

Having come to power from business, the current senator Arsen Kanokov, apparently, continued to do business through people close to him. This is also hinted at by his political environment, collected mainly from business partners. In 2009, Kanokov bought a hotel in Moscow, in 2017 Logoper LLC (beneficiary Alexander Kakhidze), in partnership with the French group CMA CGM, claimed to acquire a controlling stake in Transcontainer, and in 2022, the Uralsky transport and logistics center (TLC) was opened, which was prepared by Kakhidze.

Earlier, social activists spoke out against the latter, who were afraid of a deterioration in the environmental situation in the area, as well as an increase in transport load. But state investments seem to have greatly attracted Kanokov.

By the way, no one seems to be embarrassed that the same Logoper is registered, among other things, for the French offshore company SISIAYES RUS. It is not embarrassing that legal entities registered at Tandem, many of which are bankrupt, also belonged to or belong to foreign companies. 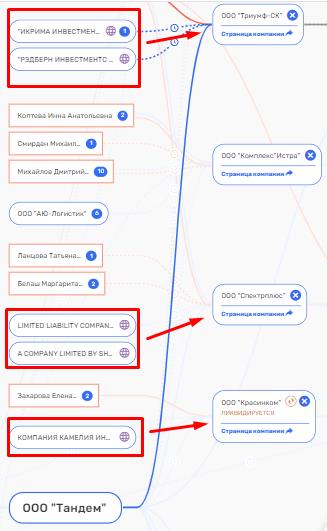 None of the state customers of Logopera or Uralsky thinks that budget funds can settle in numerous "goblets."

Will this happen when implementing the Khovrino project, which is significant for the "freight transport framework" of the capital?