Equilibrium, or bankruptcy "on the stream" from Sergey Gordeev

Developer Sergei Gordeev seems to have put the bankruptcy of firms "on stream." And and he can bankrupt... himself.

According to the correspondent of The Moscow Post, the head of PIK Group of Companies, Sergei Gordeev, seems to be trying to slow down the bankruptcy case of his company Equilibrium JSC, which was initiated by Trust. The fact is that the Dutch "Horus Real Estate Fund I B.Vi." affiliated with Gordeev also appeared in bankruptcy and is trying to achieve a change of creditor from a state bank to itself. It is very similar to the fact that Mr. Gordeev planned to conduct controlled bankruptcy. But what, in this case, is the fate of the 9 billion rubles that Equilibrium owed to the Trust?

According to the file cabinet of arbitration cases, the bankrupt Equilibrium began in March last year. The reason for this was the issuance by the company of a bond in the amount of more than 10 billion rubles, the holder of which is Trust, as well as further admission of default on securities. But suddenly, Horus Real Estate Fund I Bi.Vi, registered in Amsterdam, joined the case: it acquired the same bonds, but for 1 billion rubles from Trust, and then asked the court to replace the lender, since it is she who holds the bond package.

A logical question arises: where did the remaining 9 billion rubles go and why did Trust give bonds with such a solid discount under the hammer? The answer may lie on the surface - it turns out that the Dutch company is directly related to Mr. Gordeev himself and Equilibrium himself.

The last until December 2018 was called Horus Finance JSC. And in the list of persons and companies affiliated to the enterprise, the same "Horus Real Estate Fund I Bi.Vi" is found. 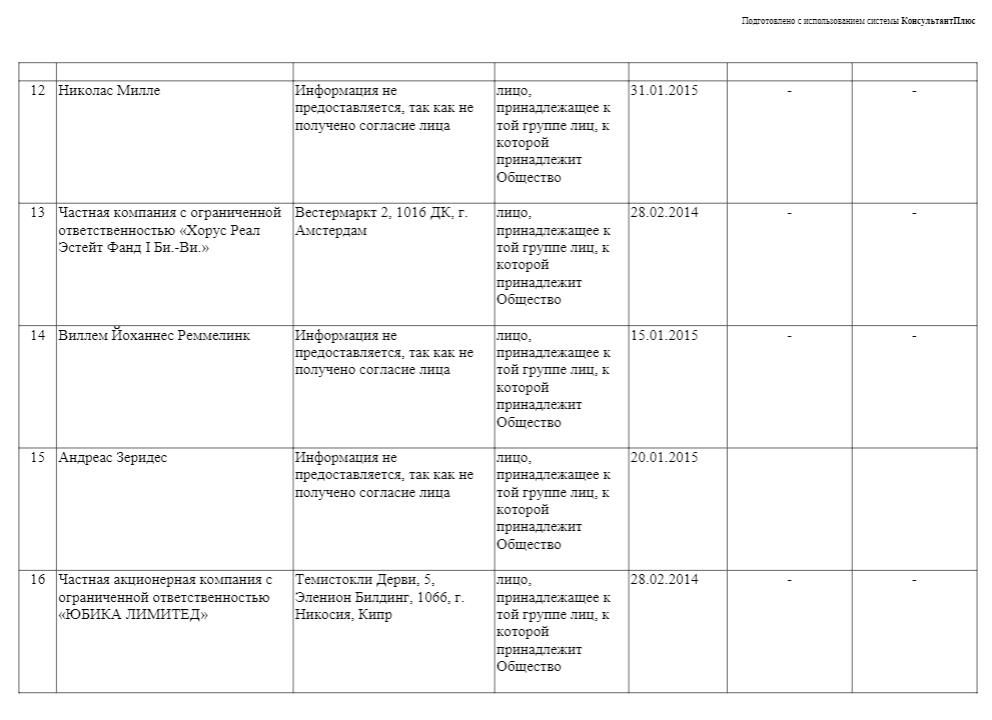 The fact is that the shareholder of Horus Real Estate Fund I Bi.Vi was the founder of several legal entities affiliated with PIK at once, including, in particular, Archecom LLC. The shareholder of the foreigner is the HREF Foundation, which is also a shareholder of PIK + LLC and Plaza Holding LLC, and the former head of Equilibrium Irina Zagorina is the general director and former founder of Plaza Holding LLC. Moreover, Gordeev was personally led by Paveletskaya Square LLC, which acted as a management company in PIK + LLC.

Equilibrium took the very 10 billion rubles from the Trust for the construction of the Riviera shopping center. And in fact, the complex cost even more. According to the authors of the Banksta telegram channel, allegedly "state bankers lost the debt link of 42.6 billion rubles with Gordeev." The loan at one time was issued by Otkritie, which, as we remember, was already going for reorganization.

The developer himself, at the same time, has now taken a vector to deny any ties between Equilibrium and PIC. In 2018, the developer sold the Kyrgyz KLS Eurasia Venture Fund to Riviera Vladimir Kiryusha. The deal was then called the largest in the commercial real estate market, estimating the cost of the shopping complex at 15-20 billion rubles. It turns out that Gordeev could additionally earn 5-10 billion rubles on this story?

Unless, of course, he really sold the asset to a third party. Versiya wrote that nothing is known about the assets of KLS Securities in Russia, except for Riviera. and about Kiryush himself information, one might say, zero. What is known is that Vladimir Kiryusha in the 1990s participated in the purchase of privatized enterprises in Russia. KLS Securities mainly serves non-residents of Kyrgyzstan, has subsidiaries in Hong Kong, Cyprus and operates private investment funds in the Cayman Islands.

Actually, this circumstance suggests that Vladimir Kiryusha with his fund can only be "face value." And it's easy to guess whose?

It is possible that just Gordeeva. And it is willingly believed, given that the figure of a businessman is also seen in other stories with probable attempts at controlled bankruptcy.

Earlier, The Moscow Post said that PIK-Comfort, which manages real estate, as well as Pik-Profile LLC, which is engaged in glazing, are now bankrupt. At the same time, they are trying to bankrupt the first structure due to the "ridiculous" amount of 5 million rubles by the standards of PIC. She should have money: with revenue of 17 billion rubles, profit is 572 million.

At the same time, the likely "advantages" of bankruptcy are visible: in this case, you do not have to pay with other creditors, to which the company owed 300 million rubles. That's the calculation?

And if we assume that the pride put bankruptcy on "serial production," then the Trust can actively help him in this. At least, the tank filed a corresponding application with JSC United Trading House Yasenevo, controlled by Gordeev, which sits in losses. At the same time, the founder of Yasenevo is the now liquidated KMK-Invest CJSC. The latter is 100% owned by the office from Seychelles RINSTONE CORPORATION. So, the funds could quite legally "leak" abroad?

But all these stories do not prevent Gordeev from continuing to work "in debt." So, since January, VTB has been pledged shares of the founders of SZ Bolshaya Ochakovskaya LLC, which implements the LCD project in the Yuzhnoportovy district of Moscow. The shares of subsidiaries of PIK-Invesproekt LLC are pledged to a number of banking organizations, including the All-Russian Regional Development Bank, Gazprombank, Alfa Bank, VTB, Sberbank.

The following scheme is drawn out: the purchased asset is pledged to the bank, the following object is bought with the funds received, which, in turn, also becomes the subject of pledge. It resembles a kind of pyramidal structure.

A liaison for many?

But banks don't seem embarrassed. Still, VTB (23.1%) and Promsvyazbank (6.77%) are present in PIK's capital. It can be assumed that Gordeev has some connections as the head of the first financial structure. Andrei Kostin, and with the chairman of the second, Peter Fradkov, the son of the former head of the Foreign Intelligence Service Mikhail Fradkov. Thus, an entrepreneur can try to protect himself from likely future questions from the security forces?

Probably, he is on good terms with the powerful - the head of the Moscow Region Andrei Vorobyov and the capital mayor Sergei Sobyanin. At least, it is in this agglomeration that he builds especially actively. And in 2018, PIK received almost 50% of renovation orders in Moscow, designating itself a leader in this area. 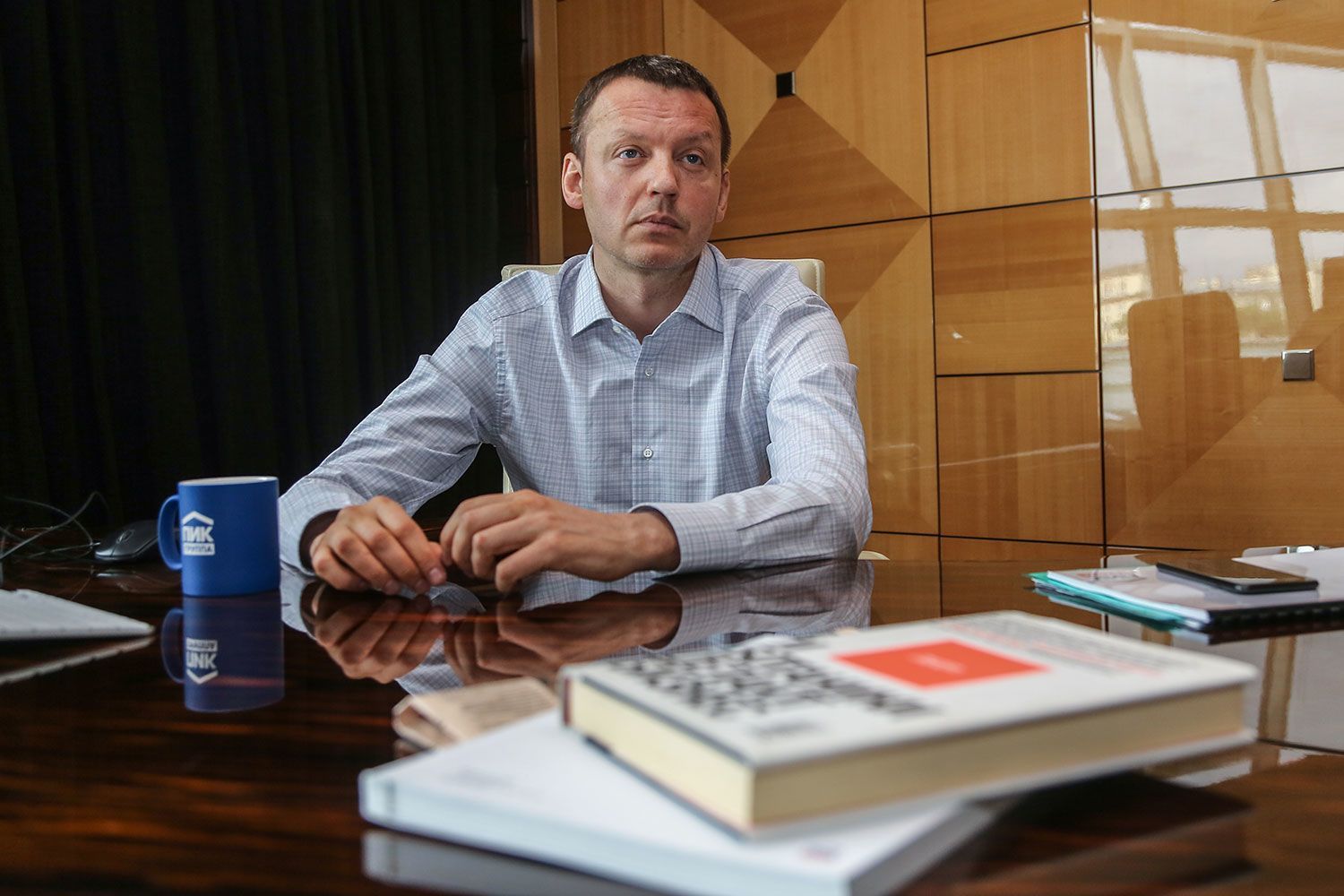 He does not bypass the second capital. Recently it became known that PIK is negotiating with the scandalous Glorax Development company Andrei Birzhin on the purchase of part of the Ligovsky City residential complex in the center of St. Petersburg from it. And in the region, by agreement with the administration, the developer will be engaged in the construction of the Novopolye equestrian sports club, in which they are engaged in the rehabilitation of children using hippotherapy.

They also connected the developer with the head of Rostec Sergey Chemezov - they say that it was the top manager who could agree on a solid discount on the acquisition of rights to 3 hectares in Kuzminki for only 400 million rubles. This price is clearly lower than the market price.

What to say, it seems, Sergey Gordeev managed to cast off the "shadow" of the past. After all, the entrepreneur comes from the notorious Rosbuilding company, which RBC openly called the "largest Russian raider."

But what if since then Gordeev could learn about dubious business methods and implement them now? It seems that this could be told by the former vice president of the PIK group of companies and the director for regional development of PJSC GK Aeroplane Alexander Lefel, who was recently detained as part of a criminal investigation into fraud on an especially large scale. The Moscow Post voiced the version that Gordeev could be perfectly aware of Lefel's affairs. However, these are only guesses.

But what is obvious now: a very confusing story is playing out around Equilibrium. So where did 9 billion rubles go, Mr. Gordeev?