The disruption of the construction of a school in Voronezh could be associated with corruption risks attributed to the "concessionaires" Otto Sopronenko and his former chief Igor Shuvalov.

As the correspondent of The Moscow Post in the Voronezh region reports, plans for the construction of a school in the north of Voronezh turned into a loud scandal. On the eve of the mayor of the city Vadim Kstenin refused to conclude a concession agreement for the construction of a much-needed object. The reason is the significantly increased costs of implementation, which was initially estimated at 2.5 billion rubles.

Nobody knows the exact background. But it is easy to assume that the "markup" could have occurred due to possible corruption risks. After all, the agreement was going to be concluded with Twenty-seventh Concession Company Prosveshchenie LLC, which is part of the group of the same name - the largest publisher of textbooks in Russia.

Recently, Enlightenment has been in the possession of the VEB.RF state corporation, led by a scandalous Russian official, former Deputy Prime Minister Igor Shuvalov.

The direct founder of the structure is SB Capital LLC. And behind him are two noteworthy owners, Alexei Shapovalov (7%) and Shuvalov's longtime associate, no less scandalous manager (and now a major businessman) Otto Sopronenko.

It is with his name that insiders are trying to connect the fact that over 1.5 thousand Voronezh schoolchildren will be left without new classes, will be forced to study in several shifts. The reason is ordinary greed? But "stingy pays twice," and Sopronenko and Shuvalov will now not receive a penny - specifically from this project. But there are many of them!

Enlighten and enrich yourself

Let's recall the background. In the summer of 2021, as part of the "pumping" VEB.RF "non-core assets," the state corporation became the owner of a 25% stake in the largest Russian publishing house "Enlightenment." Its head structure alone has state contracts worth 68 billion rubles. However, it seems that Igor Shuvalov, who leaked a snake to the post of chairman of the board of directors of the structure, did not have enough of these revenues. 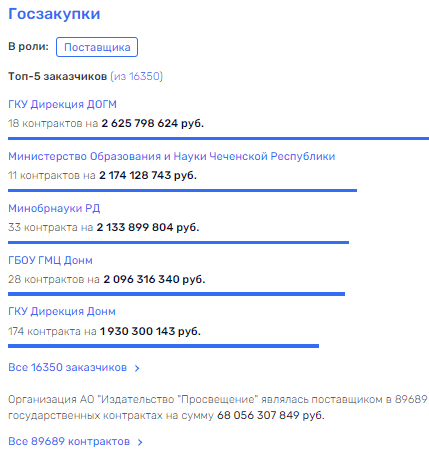 And together with other responsible persons, including Otto Sopronenko, they came up with a wonderful idea - let's create dozens of companies that, in partnership and using the authority of publishing houses, will begin to build schools throughout the country at a budgetary expense.

No sooner said than done. And now a huge number of "Concession Companies" have already appeared under different numbers and in different regions of the country. And Mr. Shuvalov, or someone from his entourage, could lobby for cooperation with the authorities of the subjects. Fortunately, both authority and hardware capabilities allow.

By an amazing coincidence, the founder of a number of such companies, as well as the head (over a dozen!) Turned out to be Igor Shuvalov's old acquaintance and ex-subordinate Otto Sopronenko.

Until 2018, the latter worked as deputy general director for the sale of assets of Vnesheconombank Investment Company LLC - VEB Capital (100% owned by VEB). It was in 2018 that a state corporation was created VEB.RF . And visionary subordinates, such as Otto Sopronenko, came in handy for Shuvalov on other "fronts."

It is interesting that even then Shuvalov allegedly tried to shove Sopronenko to work in the Ministry of Education - Deputy Minister Olga Vasilyeva. Apparently, back in those years there was a great desire to control the purchase of textbooks for Russian schools. And this is billions of rubles. But it didn't work out. So we will build schools?

And so, within the framework of PMEF-2021, the state corporation led by Igor Shuvalov announced its entry into the Enlightenment structure of ProSchool LLC. At the same time, plans were announced to build schools throughout the country.

They filed it all with great pathos. We are opening, they say, a new era of public-private partnership. What can still be read on the website of the Russian Textbook Group of Companies - another huge and money-pumped structure that ended up in the circuit VEB.RF. 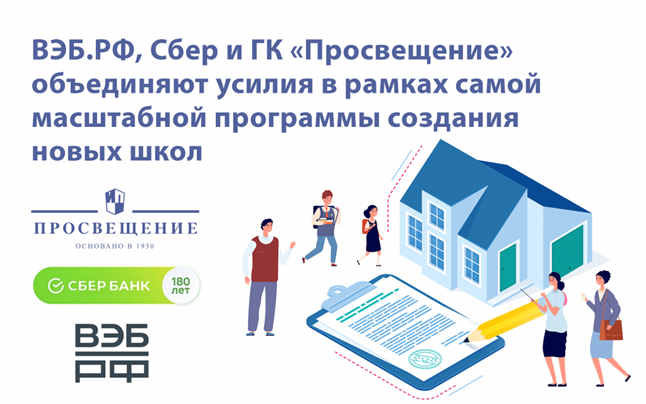 The intermediate "result" of the new "PPP era" is Voronezh schoolchildren who were left without an educational institution.

Apparently, ProSchool LLC was assigned the role of only a project operator and an intermediary for pumping funds. Because this company, of course, did not directly engage in construction. The role of customers (and, accordingly, the main "developers" of funds) was assigned to a variety of already indicated concession offices. And then we turn to Mr. Sopronenko.

The "fairy tale" is that at different times (including today) he was or remains the head of as many as 31 companies, including many concession "clones." Moreover, a good half of them, if not more, has clear signs of fictitious! 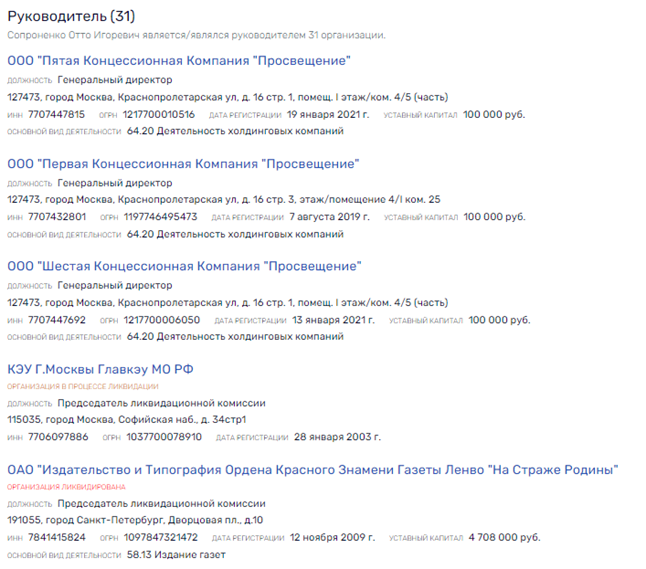 Take, at least, the first company from the list from open sources - LLC "Fifth Concession Company" Enlightenment. " With an authorized capital of 100 thousand rubles, the structure has no information about its staff for the outside world. much more interesting is the fact that at the end of 2021 the company did not receive a penny of revenue, but received losses of 71 million rubles.

However, these are just little things compared to First Concession Company Enlightenment LLC, which has as many as two employees on staff. And at the end of 2021, the two of them received a loss of 31 million rubles. 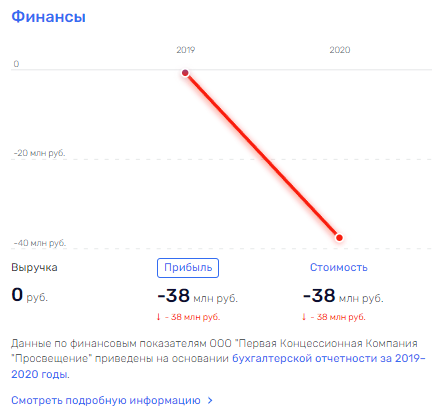 From the outside, you can ask a question - what did she even do that she went into such a minus? And nothing, because this is credit money. This is clear from the negative value of the company for the same amount - 31 million rubles. More outrageously, the direct founder of the structure is Otto Sopronenko himself (80%), as well as Complex Technical Equipment Enlightenment LLC (a subsidiary of Enlightenment). That is, there is already a direct connection with both the publishing house and the VEB.RF.

Further - the shares of both founders (i.e. LLC and Sopronenko) are under encumbrance. More specifically, the pledge is with Sberbank and Sberbank Investments. 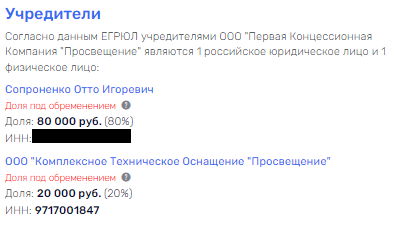 And now let's bring it together - a company that, apparently, does not conduct any real activity at all could receive budget money from the state bank, after which a "hole" of 31 million rubles formed in its capital. But neither Shuvalov, nor his colleagues, nor law enforcement officers, nor the competent authorities as a whole are absolutely worried about this.

The list of these clone companies can continue. But we are interested not only in possible corruption manifestations, but also in the real result. And if you think that in other cities (except Voronezh) everything is fine with the construction of schools - you are deeply mistaken.

One of the most high-profile scandals on the topic occurred back in 2021 - almost immediately after the beginning of the "new era of public-private partnership." In the "editorial office" of Shuvalov-Sopronenko, of course. Then one of the concession structures, which was headed by Sopronenko, disrupted the construction of the school for the 800th anniversary of Nizhny Novgorod. Writes about this "FederalPress."

Instead of calls, screams from teachers and laughter from children, people received long-term construction with the hum of concrete mixers, and 4.5 thousand children were forced to continue to "huddle" somewhere in the backyard in several shifts. No one even apologized for that failure.

The same FederalPress previously reported that construction was suspended allegedly due to lack of funding (even taking into account the fact that Enlightenment pledged to invest about seven billion rubles in the project on a long-term basis). At the same time, the contractor allegedly faced violations of construction standards, and after that the school itself completely stalled in obtaining a license.

The last event was declared the main reason for the inability to open an educational institution on time, despite the fact that the buildings were not completed completely. That is, neither Sopronenko nor his colleagues in VEB and Enlightenment incurred any responsibility for this at all.

Let's repeat - this is not a special case, but more like a system. And returning to Mr. Shuvalov - the appetites of officials associated with him clearly go far beyond these limits. For example, earlier KSP Capital Asset Management, to which it supposedly should have the most direct relationship, created a closed unit investment fund (ZPIF), which set as its goal to invest in the production of films.

Or, for example, Shuvalov allegedly could try to take control of the outdoor advertising market. And that, again, is billions. Earlier, The Moscow Post wrote about such an opportunity.

There is also a lot of information about other assets related to VEB.RF  - which is only not there. It seems that if something can bring money, it transfers something under the control of Shuvalov and his "masters" of budgets.

All this, coupled with scandals, could only be presented as a possible corruption story. But the harm from such manifestations is the inhibition of the development of the regions, the deterioration of the quality of education. In fact, if someone thieves on these projects, he takes the money not just from the budget. And takes it from the children.

Do not be ashamed of you, gentlemen officials-managers?