Could the company of businessman Rudnev, who appeared in scandals with deceived equity holders, have been involved in large-scale tax fraud under the possible cover of the GFI in the Samara region?

Last year, Russian President Vladimir Putin instructed to take control of the collection activities of professional agencies and microfinance organizations, which "sometimes crosses all kinds of borders." Some of them, not understanding the methods, literally knock debts out of their clients, make their lives unbearable.

Today, we seem to be able to see the results of work on this task. According to the correspondent of The Moscow Post in the Samara region, recently security officials raided the offices of the Business-Garant group of companies owned by the scandalous entrepreneur Ilya Rudnev. They were attended by officers of the FSB and the Federal Tax Service, in total more than 40 people.

This Rudnev Group of Companies includes the Business-Garant Collection Agency. But the security forces could be more interested in the Accounting Center "Business-Garant." According to RBC, the company was suspected of participating in the formation of the so-called "paper VAT" and creating conditions for non-payment of taxes by its customers. The source of the publication reported a check for "the involvement of consultants from the real sector of the economy in tax evasion schemes."

Then the entrepreneur Ilya Rudnev found it difficult to explain the actions of the security forces against his company. "We deal with tax disputes a lot and we have a lot of positive results. Someone certainly does not like it, "- that's the whole explanation.

But already on April 16, new searches took place, this time in companies issuing electronic digital signatures (EZPs) - Solar LLC and MTSP Group LLC. Recently, fraudsters have begun to actively use the services of such firms, registering firms for front persons.

Searches of Solar LLC and MTSSP Group LLC were a continuation of the investigation against the Samara company Business Guarantor owned by Ilya Rudnev, the services of which, among others, could be used by recipients of paper VAT. About this wrote Kommersant. We can talk about a whole "criminal pyramid," the source of the publication used such an expression in the material. If there is a "pyramid," then what can Rudnev himself have to do with it?

We explain that "paper" VAT is the receipt from the counterparty of the "one-day" documents, which are taken into account by the company when determining the costs of income tax and deductions for value added tax. At the same time, money is not transferred to the "one-day" address. This is a tax avoidance scheme.

As for the "fictitious" electronic signatures - here it is not necessary to explain much. With their help, you can do a lot, take loans on other people's names and entire companies, and steal apartments and even factories. Such transactions are difficult to dispute.

Note that there are no claims of law enforcement officers directly to Ilya Rudnev following the results of the activity of the security forces. But attention is drawn to the fact that the businessman was the founder of more than 30 offices - an astonishing "ability to work" against the background of constant warnings from tax officials about one-day firms. 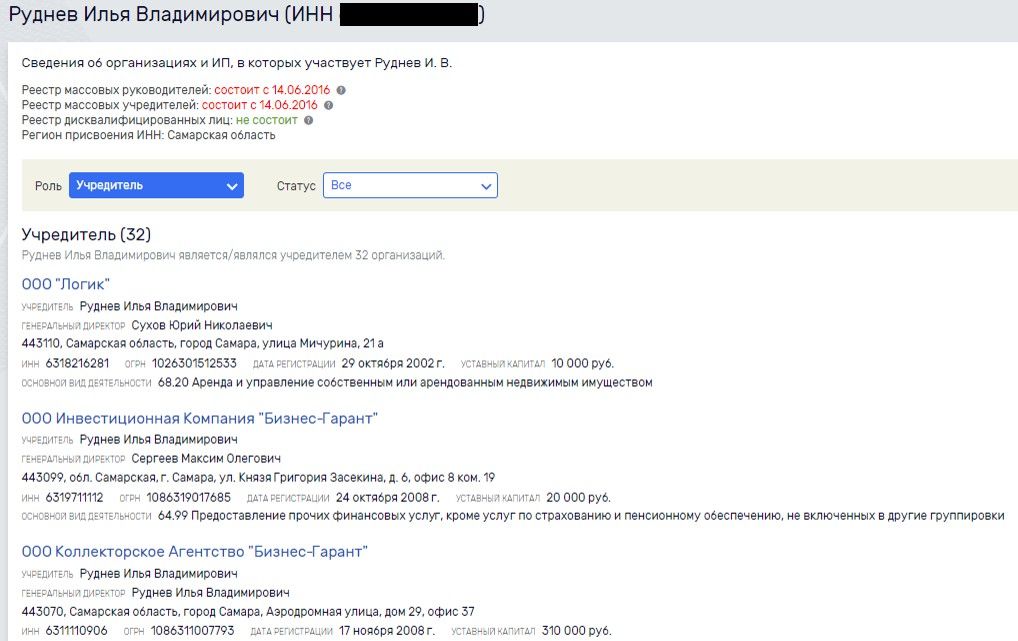 Everyone probably heard about the collectors. The working methods of many such structures are not always in contact with the law - this was mentioned last year by the President. But in addition to collecting, Rudnev's companies were allegedly engaged in advertising, rental of residential property, and even development.

Some firms have signs of fictitiousness and are similar to the very "dummies." For example, in the Agency "Business-Guarantor" all financial indicators by zeros, there is no profit or value of assets. The company employs only one employee with an authorized capital of 11 thousand rubles. This raises questions.

Another "empty" structure is LLC Advertising Agency Business-Garant. One employee with 10 thousand authorized capital, no financial activity since the middle of the last decade. Why such an office to its general director Ilya Rudnev? 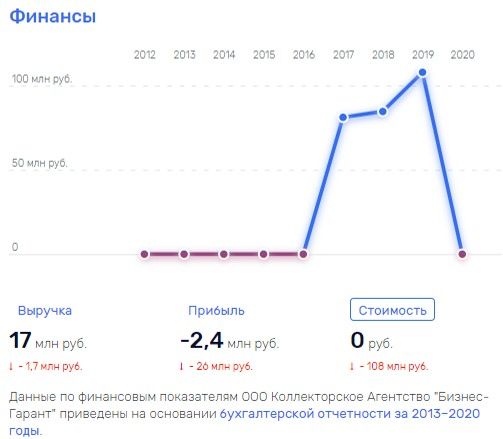 Another thing is the already mentioned "Collection Company" Business-Garant. " There, it seems, was both revenue and profit, and everything came out. At the end of 2020 - losses of 2.4 million rubles with revenue of 17 million rubles. And a year earlier - immediately 23 million profits. At the same time, 108 million rubles went somewhere over the year - so much was estimated the value of the company's assets. It seems that the assets were "blown away" after the president's words about the need to civilize this collection market.

Another company co-owned by Rudnev is BG-Development LLC. At one time, she fell into a scandal. According to the blogger spiryagin.ru on the Living Journal platform, allegedly he turned to the FAS about the eternal values ​ ​ of the advertising lie Ilya Rudnev. We quote in full:

"At the request of deceived equity holders, I conduct a journalistic investigation in the Samara region. I established violations of the legislation of the Russian Federation on advertising committed by Business-Garant Group of Companies (CEO and beneficiary Rudnev Ilya Vladimirovich, Samara st. Michurina, 21A/floor 2, tel. +7 800 707-51-98), when advertising the object - the residential complex "Ilyinskaya Plaza."

Plaza was built by KO SROO Unity, which went bankrupt. The New City SK began to complete the residential complex, and the Rudnev structure conducted sales and was actively engaged in advertising the project. Moreover, according to the blogger, the businessman's company allegedly distorted the data that the project was financed by 100%, according to the construction period, and also that Business-Garant Group of Companies provides legal cleanliness and literacy in the process of housing implementation.

As a result, the company could not even complete a new project, not encumbered by the past rights of defrauded equity holders. After that, the head of the SK "New City" Natalya Zaitseva became a defendant in three criminal cases at once. About this writes Volga News. In addition, in mid-2019, assets began to be withdrawn from Ilyinskaya Plaza LLC, through which the project was financed. The amount of debts on several claims that creditors then demanded to be paid amounted to about 112 million rubles.

All this is similar to a large scheme with the participation of many companies and organizations. Could Ilya Rudnev be its beneficiary, given how actively his company could PR the project? But if there was a scheme, such money cannot be done without influential patrons.

And then the figure of the chief Federal Inspector for the Samara Region Vladimir Kuptsov may surface.

In 2019, a subsidiary of Sberbank - SBC Uran filed a lawsuit demanding that Kuptsov be declared bankrupt. About five years ago, SBC Uranus and Sberbank, due to debts, sued the structures of Uranus Group of Companies, a former major player in the regional construction market. The guarantor of the loans of the Group of Companies was Kuptsov. In one of the cases, the bank has already recovered more than 400 million rubles from it.

In the past, Kuptsov was the owner of a large number of offices. Among these rumors are the company Uranus LLC. This company went bankrupt, and they said that the bankruptcy could have been intentional. Previously, the company was a concessionaire at the construction of another problematic facility, Argo LCD. But the project, to put it mildly, failed, and the company went bankrupt, so bribes from it can be smooth. The developer there was Sphinx LLC. According to the authors of the site Compromat.ru, allegedly its general director Andrei Gorbunov was a partner of Rudnev. And "Business-Guarantor," as in the case of "Plaza," was supposed to deal with sales of the project.

According to Volga News, Gorbunov, like Zaitseva, came under criminal investigation. He was suspected of tax evasion on an especially large scale. And again taxes. And again - Rudnev and his companies had absolutely nothing to do with it. Under investigation - completely different people.

That is, not one scandal with unfinished and equity holders, but several. Moreover, it turns out that the company Uranus LLC, with which they tried to connect the GFI in the Samara region Vladimir Kuptsov, could also light up in it. And could he not become the factor that, time and again, took the attention of the investigation towards anyone, but not Ilya Rudnev? 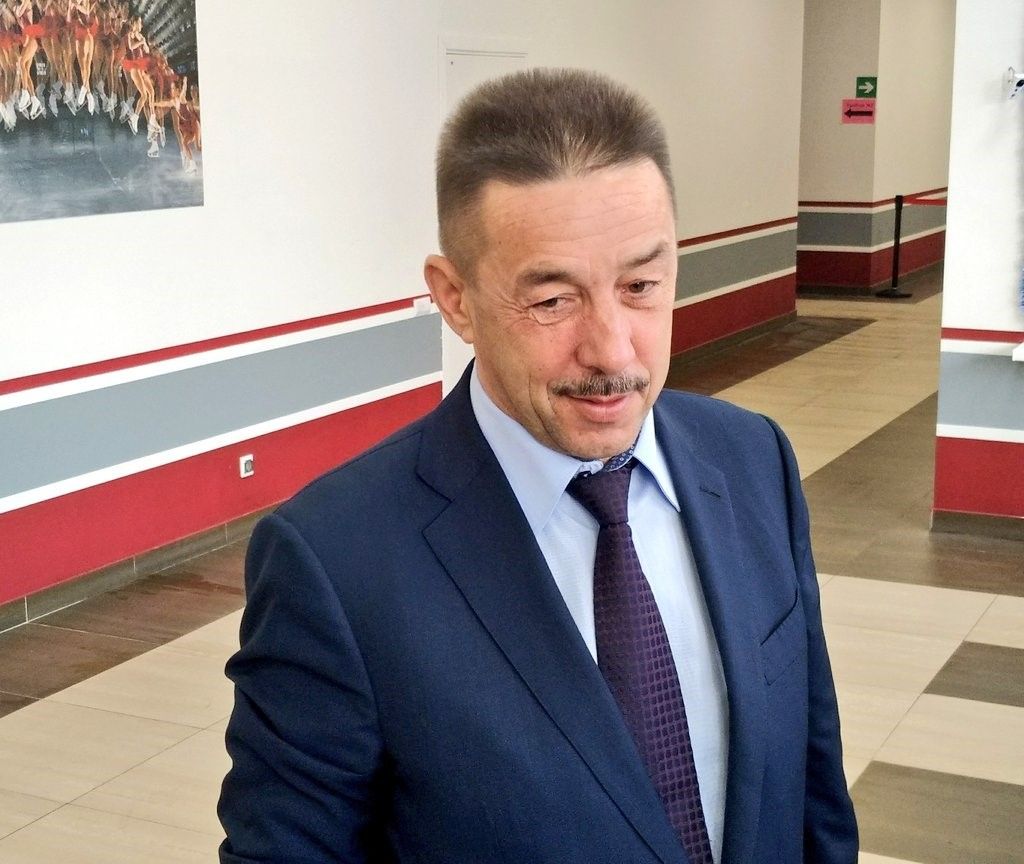 Indeed, according to the authors of the Compromat.ru website, allegedly it was Rudnev's Business Garant that initiated the bankruptcy of Uranus LLC. And if this is true, now is the time to start worrying about the GFI of Vladimir Kuptsov. What if, after recent searches at Business Garant, people in uniform suddenly knock on the door of his office?