Dosflot will be built: Pavel Tyo entered the environmental zone of Moscow

Pavel Tyo and Mikhail Rabinovich, will they deprive Muscovites of the park zone at the expense of VTB and Andrei Kostin?

The coastal zone of the Khimki reservoir is built up with apartments and a sports complex - an order on the preparation of a project for planning the territory at Dosflot passage, ol. 10, published on the official website of the Moscow government.

The situation causes a storm of indignation from local residents, since, firstly, according to the norms of the urban planning code, any construction is prohibited closer than in a 100-meter strip from the coast. People fear that the forest park under their windows will be completely destroyed - and instead of walking under trees, people will have to be content with walking along the fence.

Fears have quite real ground. Developer Galaxy Group promises to build an elite residential complex with a closed area. The whole story, according to the above document, was financed by VTB Bank. He was given only two weeks to carry out the project.

Such an abundance of structures close to the government around the entire situation, a rush to the project and a complete disregard of not only the opinions of local residents, but also, possibly, the norms of legislation, indirectly indicates that the project is tied to the interests of someone large and close to government structures. The Moscow Post correspondent understood the situation.

The Galaxy Group website has already published a project and development plan that has already begun. Three months have passed since the signing of the order on the preparation of the planning project, and cranes are already in full swing on the territory, five floors of future apartments have been erected. Judging by the photos. No 100 meters to the shore line here and does not smell. 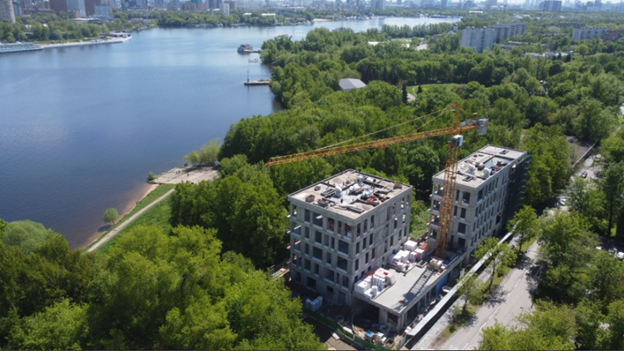 Advertising of the project is given in serious media - for example, in Kommersant back in March of this year, everything about the club house with the uncomplicated name "Dosflota, 10" was described in detail and beautifully, and a comment was published by a person named the CEO of Galaxy Group Yulia Zamorova.

A little lower, in the hem of the article, it is written in small print that the developer is the specialized developer Capital-Invest JSC. Wait, what about the Galaxy Group? A company that positions itself on a site with objects that it built as "a professional developer carrying out comprehensive implementation of projects in Moscow and the Moscow region".

Not so simple. It turns out that such a legal entity as Galaxy Group does not exist at all. There are a bunch of small construction firms that are not legally united in any way, but work in the market together and call themselves Galaxy Group.

This includes, for example, Loko-Realti LLC, where the aforementioned Zamorova is listed as the founder. By the way, the authorized capital of the company is 50.5 thousand rubles. Isn't it not enough for an elite real estate developer? In addition, the company's revenue has never risen above 4.9 million rubles, according to the latest data, it is no more than half a million.

On the site "Dosflot, 10" we see information that the sales office is located at - Moscow, ul. Svoboda, 50 p.3, block B, pom. № 10. It is located here just JSC Specialized Developer Capital-Invest with revenue for 2021 - minus 277 thousand rubles.

Interests of Sobyanin and Khusnullin?

Earlier, Capital-Invest was the founder of SK-Start JSC, which through Novy Start LLC is associated with Moskapstroy. According to Vedomosti, this company was going to buy the Moscow government through Mosinzhproekt from Vladimir Yevtushenkov's AFK System in 2017.

According to Regnum, in 2015, the board of directors of Mosinzhproekt included Marat Khusnullin, who has been the deputy head of the government of the Russian Federation since January 2020, and from 2020 to 2022 Moskapstroy was headed by Marat Gizatullin, who is considered his protege.

In July 2020, the Prosecutor General's Office of Russia signed a contract with Moskapstroy in the amount of 680.8 million rubles for the third stage of reconstruction of the Federal State Budgetary Institution "Sanatorium of Employees of the Prosecutor's Office of the Russian Federation" Istra. " The company then became the only supplier.

Interestingly enough, the official media, including RBC, called the head of the Galaxy Group a certain Eugene Strauch. According to portals about construction real estate, this is a former employee of the Capital Group of the notorious Pavel Tyo, who is credited with close relations with Moscow Mayor Sergei Sobyanin.

The Moscow Post has written a lot about this Mr. - in particular, his biography is interesting that a businessman may be associated with the crime boss Santa Hassan. Structures close to it constantly receive tidbits of metropolitan land.

On the official website of the Alfa-Centauri residential complex, which was being built by the Galaxy Group, it is also said that the company implemented it together with the PIK group, another scandalous Moscow developer owned by Sergei Gordeev. This gentleman has repeatedly become the hero of our publications, including because of his possible connection with Sobyanin. Recently, the businessman has had financial problems, they are talking about the imminent default of PIK, and nevertheless he continues to build up Moscow, without getting out of the scandals at the same time.

Pavel Tyo and Sergey Gordeev, as representatives of developers, were already united for joint construction - we covered this story in detail. Can we repeat?

Let's clarify again. Based on the above, it turns out that people can be deprived of a plot of green land so rarely found in Moscow with money from the state bank VTB. What is the code for state organization in this. Maybe private interests are also protected here?

This is not the first time that budgets under the sensitive leadership of Andrei Kostin go by no means where, as it seems, the bank's funds should go. As The Moscow Post previously wrote, Kostin's interests may be traced in the project for the development of the territory of the Spartak stadium and the former Tushino airfield.

Moreover, here the project assumes an extremely successful (but not for ecologists) location. "It's about a unique 160ha green peninsula where there's no archaic and industrial development." - described on the VTB website.

Apparently, in return, VTB secured the share of the founders of Specialized Developer Spartak Stadium LLC, which is implementing the project. It is possible that with the Galaxy Group, or rather with some of its structure, the same will soon happen. Or Kostin has long been "hiding" behind some of the offshore companies for which the companies that actually make up the holding have been registered.

As for the Galaxy Group itself, the structure when the head legal entity does not actually exist can be implemented with the aim of unpunished money laundering. According to the authors of the LiveJournal website, allegedly "under the guise of participating in the construction of the Butovo Park residential complex, this group of persons took possession of citizens' funds. After that, they built two houses with the proceeds, but they are in no hurry to transfer the apartments to their rightful owners. STRIP + LLC was registered specifically for the implementation of this scheme. The scheme is somewhat confusing, but the goal is clear: to terminate contracts, re-sell apartments and bankrupt STRIP + LLC without returning money to gullible apartment owners. "

This information is from 2012. Now STRIP + LLC has been liquidated. Butovo Park belongs to PIK, money from STRIPA + is most likely withdrawn to the offshore GRUNBAL INVESTMENTS LIMITED, for which this legal entity is registered.

According to the authors of another portal, Dolevka, allegedly Yevgeny Adrianovich launched the Butovo Park residential complex project. He collected money from citizens, considerable money, simultaneously promoting each participant in shared construction by another 2% of the cost of the purchased apartment. A prerequisite for concluding an equity agreement in construction was the conclusion of an agreement for the provision of incomprehensible services with Loko Realti LLC. For this modest contribution, citizens were "provided" with services for the selection of apartments, registration of contracts in Rosreestr and the subsequent registration of apartments as property. In fact, nothing was done, not done and not going to be done. "

Let's go back to Capital-Invest. The founders of this company are Vekta LLC, which also does not shine with high financial results. According to the Unified State Register of Legal Entities, the founders of Vekta LLC are three individuals: Alexander Alekseevich Mineev, Tatyana Yurievna Yelskene and Sergey Alexandrovich Chepurok.

The first is related to the mass of companies, among which there is, for example, Dom Stroy Holding LLC, registered with the Cyprus offshore SI TI DRIMZ LIMITED. The company's revenue is zero, money can potentially be withdrawn. Funds from projects of the same Capital-Invest and other firms registered on Mineev can also go here.

By the way, some of them were ordered by Rostelecom, Russian Railways and institutions of the Ministry of Internal Affairs. And there is an explanation for that. According to information from the site (how they position themselves) of the largest private transport and logistics company in Russia, Alexander Alekseevich Mineev has been on the board of directors of DVMP PJSC (Fesco) since November 2020. 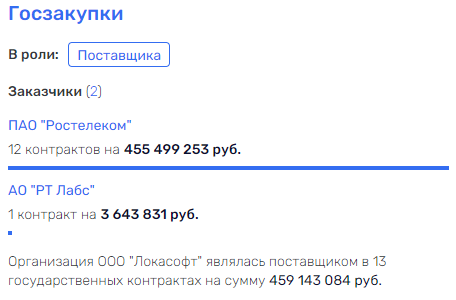 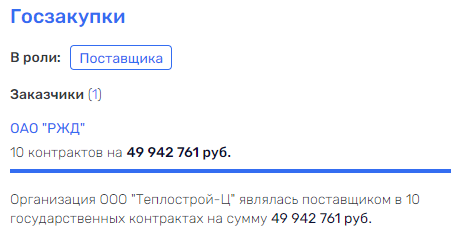 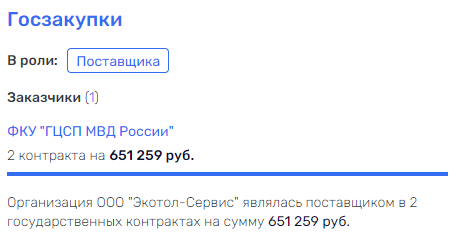 This is a large supplier of Transmorflot, which used to belong to Ziyavudin Magomedov, and now co-owner of Loko-Bank JSC Mikhail Rabinovich. The board of directors, according to Kommersant, also includes billionaire Gennady Timchenko.

By the way, the shares of DVMP, according to RBC, are pledged to VTB. By a strange coincidence, it is this bank that finances the project of the so-called Galaxy Group.

Let's go back to Mineev. From 2000 to 2017, he led the legal and corporate block of the railway company. Which one is not specified. Since 2017, he has been holding the position of Marketing Director of Transport Repair Company Transremko LLC, behind which Rabinovich is also considered to be. She also has government orders from Russian Railways and its subsidiary FPK. The company is registered offshore "CONSITECH LIMITED."

Thus, the development site contrary to the opinion of the residents and. it seems that the structures close to Pavel Tyo, Sergey Gordeev and Sergey Sobyanin with Marat Khusnullin could once again get the norms of the urban planning code. And all this is with the money of the state bank. At the same time, money from "one-day firms" can hypothetically be withdrawn to offshore companies, which have overgrown the entire giant network of the so-called professional developer, and fall into the pockets of the above-mentioned personalities, as well as the head of VTB Andrei Kostin.

The billionaire Timchenko and Rabinovich and the first persons of Rostelecom, Russian Railways and even, possibly, the Ministry of Internal Affairs could theoretically take part in the case. Is the construction business criminal?