Why did Russian oligarch decide to get millions from a British supermodel, and why might tax authorities be interested in his Russian offices?

As it became known to the correspondent of The Moscow Post, Russian entrepreneur, founder and co-owner of the development group Capital Group LLC Vladislav Doronin sued his former girlfriend, British super model Naomi Campbell. The businessman demands from her to return the money, which he had lent her before, as well as expensive gifts and real estate, which the lady for some reason does not want to return. Doronin's total claims amount is $3 million.

Vladislav and Naomi met at the Cannes film festival in 2008, and then began dating. They are said to have been introduced by Leonardo DiCaprio. However, in 2013, the couple separated, and since then there has been no word of their relationship. It is not very nice to take back gifts from your former passion, taking into account that 7 years have passed. Thus, he may be given a label of a greedy litigator.

What is the reason that in 2020 Doronin suddenly went to court? According to rumours, everything is prosaic - his Capital Group LLC, once one of the most successful development companies in Russia, is now experiencing serious financial problems. In addition to Doronin, there are enough scandalous characters in the structure, and the situation with Naomi clearly does not benefit their reputation.

Doronin himself, it seems, has long been not averse to any methods of achieving goals. Detractors have repeatedly attributed his acquaintance with criminal authorities. In particular, according to the authors on the Russkiy Kriminal website, allegedly Doronin is associated with an authoritative businessman Oleg Sheikhametov (Oleg Sheikh). Together with him, he was to build the Residential Complex called Litsa in the  Solntsevo district, Moscow region.

At one time, the same Sheikametov, according to rumours, could pass a bribe to high-ranking employees of the IC of the Russian Federation for the release of another "authoritative" citizen Andrey Kochuikov. The latter may be widely known in narrow circles by the nickname "Italian", and be the closest partner of the notorious Zakhariy Kalashov (Young Shakro). 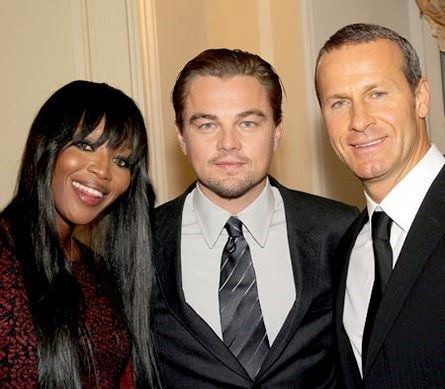 They say that Leo DiCaprio introduced Naomi and Vladislav. If this is true — it is unlikely that the British model is grateful to him today

Co-owner of Capital Group Pavel Te, who repeatedly gets into numerous scandals can be recalled. At the same time, Te is called only the second largest figure in the company after Doronin, even though the latter  moved the centre of his business to the United States long ago.

It should be noted that Doronin and his Capital Group, along with Pavel Te, are one of the key beneficiaries of the Moscow City high-rise building complex. In 2016, Doronin's partner Pavel Te was already involved in a major scandal with the Moscow city hall. Then he bought one of the famous "book-houses" on Novy Arbat for 2.4 billion rubles.

A four-star hotel was supposed to be built to accommodate guests of the 2018 FIFA World Cup in place of the house in shape of a book. However, during the acquisition of the building, it turned out that the LLC Apart Group, associated with Te, became the only participant in the auction. According to rumors, the documentation was sharpened for this office. 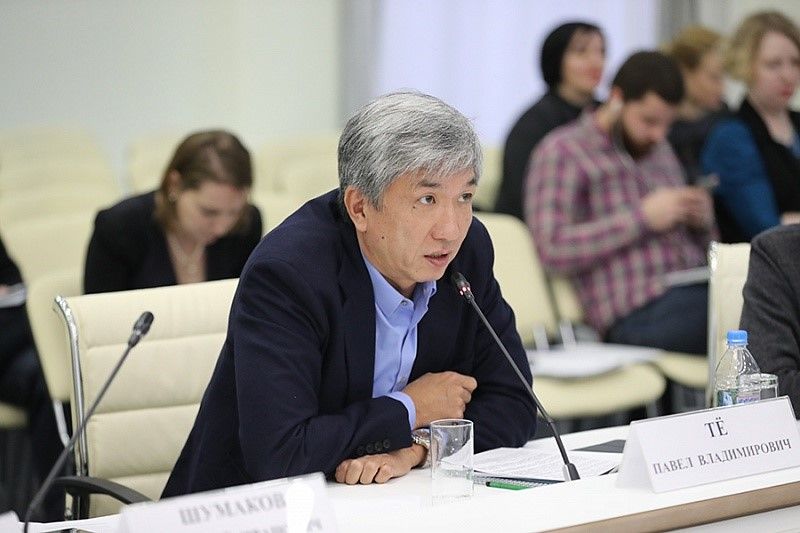 Doronin's partner Pavel Te is even more scandalous than Doronin himself

Accordingly, the city received much less for the asset than it could have with more serious competition. Not more than a year before the deal, at the beginning of 2015, both situated book-buildings on Novy Arbat were valued at 2.7 billion rubles. It was written by Vedomosti.

Perhaps, when it comes to budget money, the difference of 300 million rubles for officials and businessmen close to them does not look serious. Of course, all this fueled rumors that Te and his partner Doronin had close ties to the Moscow city hall.

Today Doronin and Te together with Eduard Berman own 33% of the stocks of Capital Group Development LLC. It is curious that this company received zero revenue in 2019, but somehow managed to reach a plus of 2.6 billion rubles. The value of assets is estimated at the same amount. It should be investigated by the tax authorities how it was possible to earn more than two billion without receiving funds to the company's account.

Something else is interesting. Capital Group Development LLC has a single founder - the head structure of Capital group LLC. And it, in its turn, received more than 14 billion rubles under state contracts with the now liquidated state unitary enterprise called SUE REM of Moscow, which was engaged in the management of the capital's real estate. 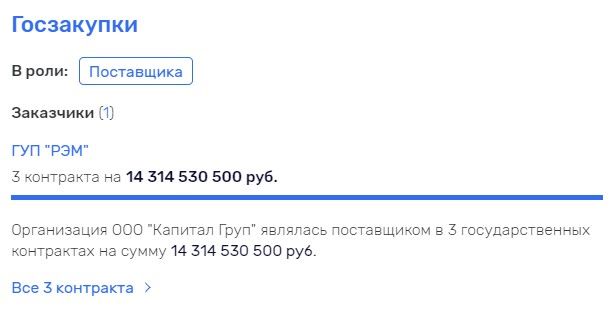 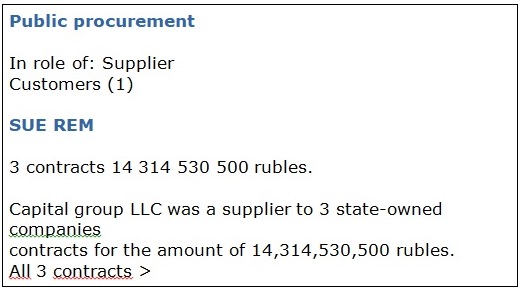 Where could the budget billions settle? In the offshore. The head company controlling Capital Group is Cyprus Capital Investments Limited (C.I.T.).  - A real rampage of firms with foreign registration is in the group's subsidiaries as well. 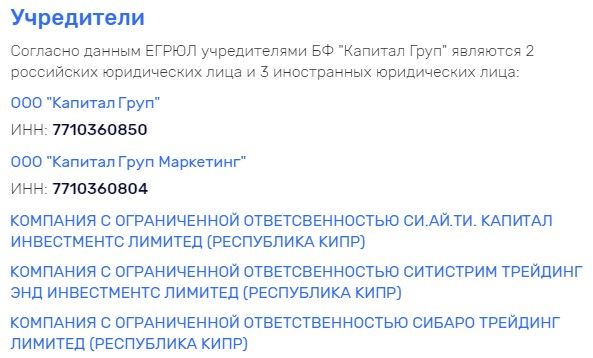 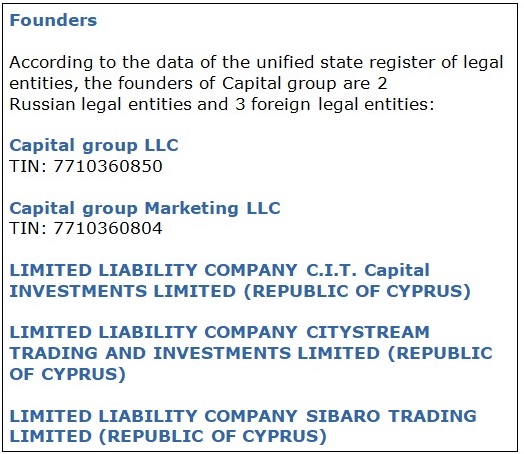 For example, the subsidiary of Capital Group - BF Capital has as many as three Cypriot companies as founders. Yes, this structure is a charitable Foundation. But it must have financial statements, because funds for charity are held through official document flow. But now there are zeros everywhere in the structure's finances.

The Fund does not have any property either, because according to the Rusprofile information service, the value of the Group's balance sheet assets is zero. But at least there is information about it.

But questions should be raised concerning another structure, which may be close. It is about Holding Development LLC, which is the founder of Capital Group Marketing LLC. There, Doronin's partner Pavel Te owns 80% of the shares.

At the same time, the company with an authorized capital of 20 thousand rubles for some reason employs one employee, and for 2019 it did not receive a penny of revenue. The value of the company's assets is also estimated as zero - that is, it simply has nothing that could be worth anything in the market.

But last year, Holding Development LLC received a fabulous profit of 120 million rubles. And this is something else, for 2018, it was equal to more than 400 million rubles. Again, without any revenue or asset value. After that, suspicions that money can simply be withdrawn from the structures only grow stronger.

Tell me who your partner is

However, Pavel Te, whom evil tongues are trying to present as almost the "right hand" of the criminal authority "Ded Khasan", is not the only scandalous partner of Vladislav Doronin. It's a common knowledge that  the latter owns the Oko tower and a number of other objects in Moscow City.

According to the authors on the website Russkiy Kriminal, allegedly a scandalous entrepreneur Gavriil Yushvaev is Doronin's partner there. In 2018, a conflict situation could arise between the two businessmen. More precisely, between Yushvaev's guards and the security of Moscow City, which are controlled by Doronin.

So far, no one has revealed the exact cause of the possible conflict. There are many rumours in the network that its roots may lie in Doronin's debts, which he allegedly tried to liquidate at the expense of his partner by renting out room in the Oko, which could house the offices of Yushvaev's people.

However, it seems that almost everyone has forgotten about that situation today. And there is no special reason to remember, because Vladislav Doronin spends most of his time in the United States. His company, OKO Group, is actively working there, and is involved in a large-scale project to build a $350 million condominium in Miami.

Therefore, as well as other projects, Doronin can cooperate with other scandalous characters - the President of ONEXIM-Development Oleg Baibakov and abruptly retired from Russia ex-Manager of Nornickel Maxim Finsky.

The latter, a former partner of oligarch Mikhail Prokhorov, fled the country in 2015 after being accused of fraud. This was reported by journalists of the portal BFM.ru.

However, Vladislav Doronin himself is not at all confused by the fact that Russian law enforcement agencies would not mind talking to his partner. Apparently, money does not smell, and with the concepts of honor and conscience, such businessmen are not well to do. This can be evidenced by the situation with Naomi Campbell, who after 7 years of separation may suddenly owe to her ex-boyfriend.

But here some might remember that before the relationship with Naomi Doronin divorced his wife, with whom he had lived for more than 20 years. However, then, according to rumours, he paid serious compensation - about 10 million euros. It may very well be that today he is extremely sorry for that. Not about leaving his wife, with whom he had made his fortune, but about the compensation.

28 January, 8:03
Nothing personal is just business: who can replace Sobyanin as mayor of Moscow?

29 November, 7:55
"Oblivion" of Ryumin - what information is the head of Rosseti afraid of?
See also