Doronichev transferring "blood" to the West?

Can Russian "startupers" from medicine Alexey Remez and Valentin Doronichev, who seem to be well "sitting" on state contracts, be behind the scandal with the sale of biomaterials from Botkin hospital?

As the correspondent of The Moscow Post reports, the Presnensky court of Moscow arrested Oksana Paklina, head of the pathology Department of the Botkin city clinical hospital, and Alexey Poddubny, General Director of Central National Biobank LLC (CNB). The investigation believes that Paklina illegally transferred biomaterials of living and dead people to the CNB for money.

The defendants were detained at the scene, they have already pleaded guilty, but something else is interesting. One gets the impression that Alexey Remez, a successful startuper, creator and owner of the digital platform for diagnosing cancer using histological tissue sections UNIM, and one of the founders of the Invitro medical company, famous doctor Valentin Doronichev, may be involved in the story. In the past, Invitro has already "burned" on a similar scandal with biomaterials.

Perhaps Doronichev and Remez decided not to "shine" anymore, and hide the new "startup" through a lot of intermediaries, didn’t they?

She, in turn, is the founder of the Arena LLC company, where she owns 100% of the shares. The company is dubious, the authorized capital is only 10 thousand rubles, the only employee and zero value of assets. And the CEO of the company runs a Manager Yevgeny Mikhailenok. Probably a figurehead. But he, in turn, is the founder of the St. Petersburg research center In Vitro LLC. 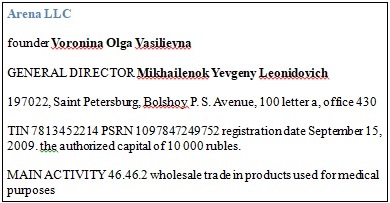 The company has signs of fictitiousness, does not formally conduct any financial activities (zeros in the financial report). Its name is In Vitro. There is another company on the market that deals with medical tests - the well-known network of clinics Invitro. 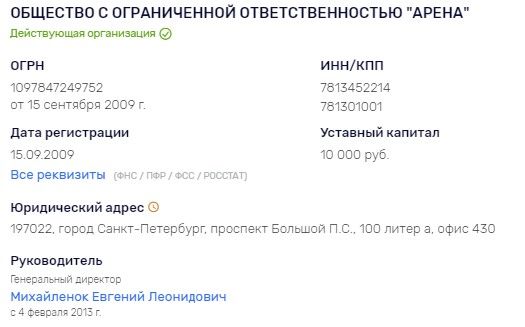 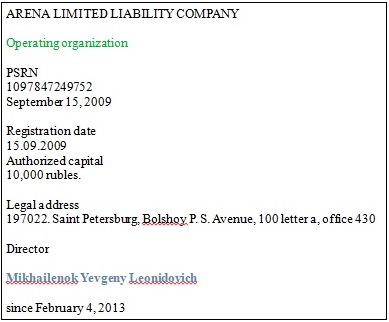 The names are similar. But it is much more serious that related scandals are similar. After all, in the past, Invitro could have been involved in the export of Russian biomaterials abroad. President Vladimir Putin spoke about this problem in the country. The situation was described by journalists of the Delovoy Kvartal NSK. The publication referred, among other things, to the words of the chief sanitary doctor Gennady Onishchenko:

"Today we have many laboratories that conduct clinical research, these are foreign laboratories, for example, Invitro. We have allowed them to the most intimate. Today, in many clinics in major cities of our country, they conduct research, conduct high-quality research, but they have huge opportunities to study this material on the territory of our country and transfer data abroad."

But after Invitro was "criticized", the company quieted down. There was no suspicion of any such activity. And in that scandal, it was about selling abroad. Presumably, CNB, receiving biomaterials on a paid basis, was doing exactly the same, because the cost of such data is very high. And the structure with the similar name In Vitro, controlled by Mikhailenok, could be used for such cases.

If Invitro has worked with Western partners, it is easier for them to cooperate with a company with a similar name and not lose established contacts. And with the above-mentioned "startuper" Remez, it can be connected as follows.

One of the co-owners of Alexey Remez's UNIM platform is Medme LLC investment fund. It is fully controlled by the Dutch offshore company Medme group B. V. the CEO there is a well-known character, Dr. Valentin Doronichev, the founder of the controversial medical network Invitro. 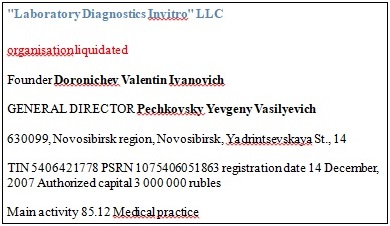 Doronichev, as you know, is a fan of creating companies with similar names. Earlier, The Moscow Post wrote that Doronichev got 15% in the Webclinic company, in the takeover of which he could be interested. But there were other owners. Perhaps this is why later, together with his partner Daniil Kazhdan, Doronichev created a company with a similar name, Vebklinika LLC, where money could then be withdrawn from the first structure.

There is an assumption that Doronichev, along with Alexey Remez (also working in the field of biomaterial analysis, though "digital" analysis) may be the beneficiaries of the story with biomaterials. 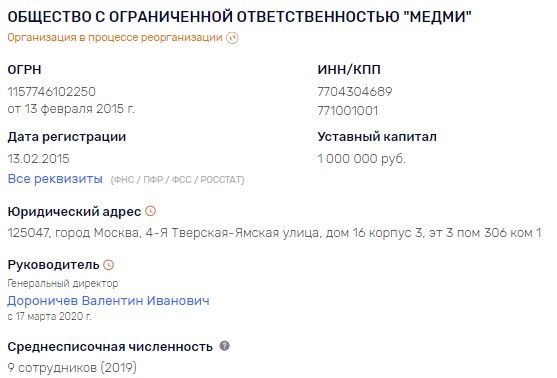 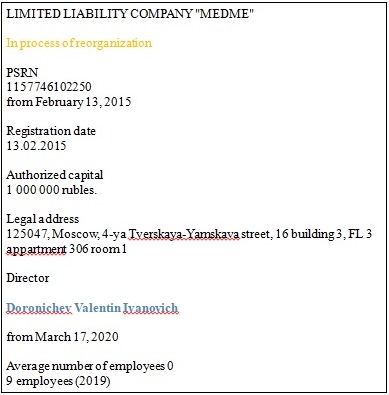 We will talk about the UNIM Remez platform separately, but for now we want to draw your attention to the fact that the structures associated with these entrepreneurs have long been "spinning" around the state order. Remez’s UNIM LLC, having the status of a micro-enterprise, has a portfolio of orders from the state in 45 million rubles. It may well be that the structure is being lobbied at the Federal level.

The above-mentioned co-founder of CNB Olga Voronina also owns a company that is not alien to state contracts - Serbalab LLC. Also in the field of medicine. The amount is less - only 6.5 million rubles, but Voronina's partner in the company is Sergey Alexandrovich Glotov, a State Duma Deputy of three convocations at once.

If businessman Glotov and former Deputy Glotov are one person, then the company's state contracts can be explained. Could he have provided patronage on the medical topic to Remez’s UNIM LLC as well? After all, IT-medicine services and biomaterials are at a huge price in the Western market.

The same Laboratory diagnostics Invitro LLC, the founder of which was Doronichev, is now liquidated. Perhaps because of the same scandal with the sale of biomaterials. Instead, another Invitro is operating on the market. But Invitro has enough scandals besides biomaterials.

According to the authors of the VC.ru website, allegedly ex-employees of Invitro in the past accused the new head of marketing of the company in the dismissal of the entire Department without legal compensation and explanations. Have such practices existed since the time of Doronichev?

Valentin Doronichev is the founder of 23 companies at once, many of which may have signs of fictitiousness. However, even if you we back to the Medme, which is a co-owner of UNIM LLC of Alexey Remez, it can be puzzling. The company doesn't have a lot of employees - only nine. But it has huge losses: with zero revenue for 2019, the company worked in the negative for 39 million rubles with a negative asset value of 145 million rubles.

Is it possible that the money received under the state contracts of Remez’s UNIM is being withdrawn from it? Meanwhile, it is not clear how exactly UNIM received these state contracts, because there are both experts and ordinary observers on the market who believe that the startup can be one big scam.

The essence of the "method" for diagnosing cancer "at home" is a cloud service where you send data from a histological section of the skin. There, artificial intelligence uses a neural network to assess the condition of tissues and the possible presence of a tumor. It is with this Remez "visits" investors.

According to Sekret Firmy, the cost of Remez's know-how services is about 10-15 thousand rubles per analysis, with an average margin of 25-27%. Not bad! And despite all the rumours, no one has been able to confirm that this is an intermediary or some kind of fraud. But there is one "but".

According to the authors of the RusBase website, allegedly a colleague of Remez, the General Director of the company Doktor na Rabote (Doctor at Work) Stanislav Sazhin believes that one can get such a service, which is provided by the Remez service, for free under the obligatory medical insurance in any city of Russia. That is, money can be taken literally for nothing. Just a nice high-tech wrapper? 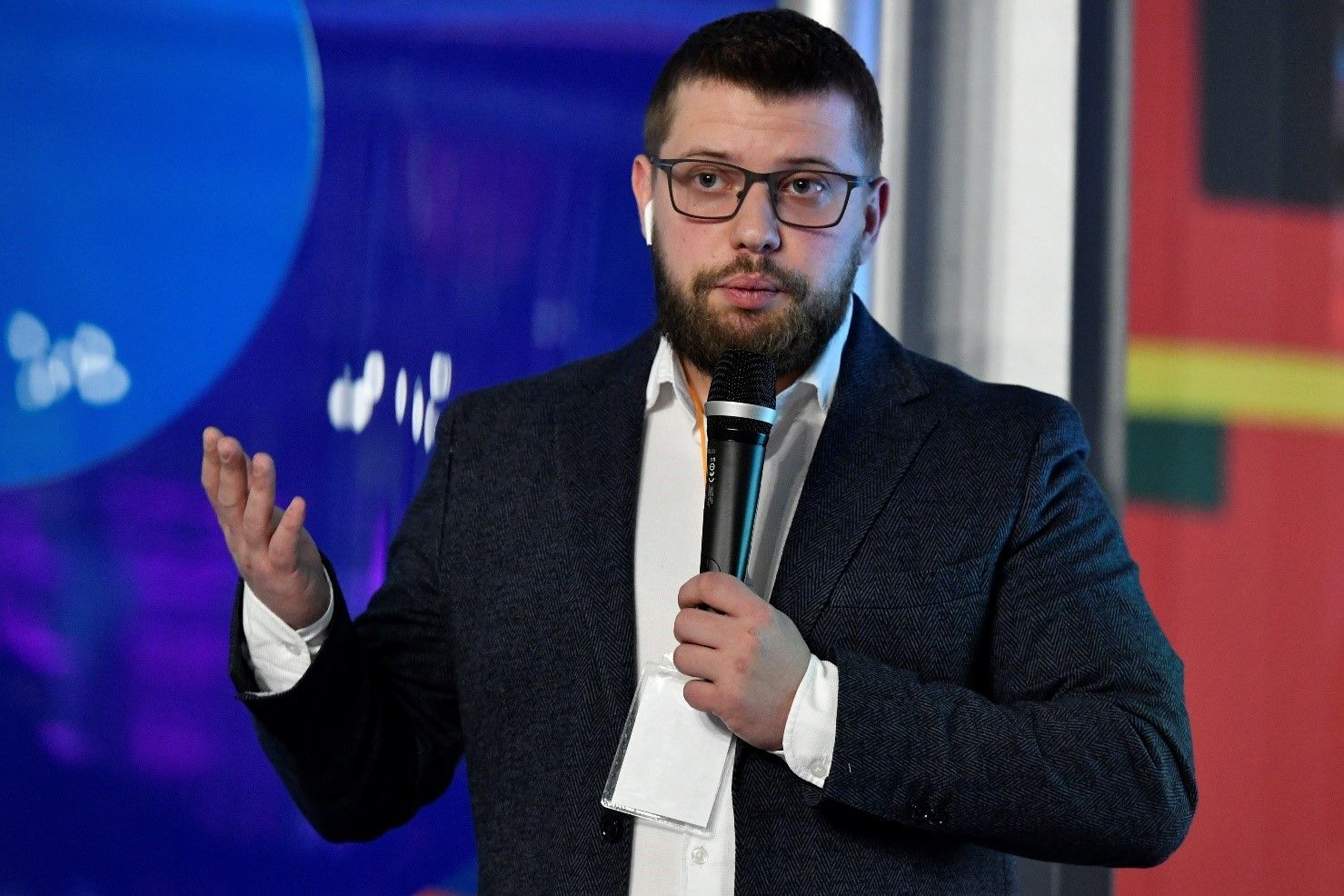 Alexey Remez - a loyal partner, or just an assistant to "expert" Valentin Doronichev?

Not to mention the fact that the startup itself was organized with the involvement of state funds. Remez received the initial capital of 14.5 million rubles from the Internet Initiatives Development Fund (IIDF), and only later got hold of investors, including Alexey Basov, the Vice-President of Rostelecom.

"The topic of medicine is partly close to me, so today I will tell you about another start-up of IIDF - #UNIM. Someone Alexey Remez and accomplices on state funds (!) organized a wonderful office for taking money from cancer (!!) patients and their relatives. IIDF gave Remez more than 15 million rubles and arranged a speech to Putin. Remez simply lies and capitalizes on the poor awareness of patients and their fear of death from cancer."

It is not possible to determine whether this quote is authentic, and whether In Vitro and Invitro, which was founded by Valentin Doronichev, are really true. However, the data provided by us allow us to believe in the version according to which a group of young and not very startupers from medicine could get a good job in the market of medical tests, and even find Western partners who would gladly accept the biomaterials of our fellow citizens.

In addition to possible crime, it is the connection with state support and state contracts that is confusing. Don't we have more "transparent" startups in our country, where possible connections of their owners with each other don't need to be searched through a whole network of affiliated companies?