In whose interests are they trying to bankrupt SKOL airline, and what habits did the current head of GTLK JSC Yevgeny Dietrich take with him from the Ministry of Transport?

The reason was an attempt to bankrupt the structure by the State Transport and Leasing Company under the leadership of the former head of the Ministry of Transport, Yevgeny Dietrich. Not only he, but also Surgutneftegaz Vladimir Bogdanov may have his interest in this. The former "daughter" of the oil company NPF Surgutneftegas owns a stake in one of the largest Russian air carriers UTair. And here is such an opportunity to remove a competitor from the road.

The fact is that SKOL owed GTLK about 3 billion rubles in payments for leasing equipment, but the state corporation does not go into any debt restructuring. In an open letter signed by the owner and general director Sergei Shilov, SKOL offers GTLK JSC a settlement agreement on restructuring - together with guarantees and a pledge of 30% of the share in the authorized capital.

At the same time, the practice of JSC GTLK to resolve the debts of other airlines, carried out repeatedly, as a rule, does not provide for any additional requirements for ensuring restructuring. That is, the company is ready to take a desperate step, and transfer a third of the company to GTLK. Maybe the goal is just to get the company under your control?

It seems that the GTLK, together with Dietrich, is not at all embarrassed that the debt from SKOL arose for objective reasons, all of them are described in the letter. Prior to this, the structure regularly paid, having already transferred about 1 billion rubles. It is not confusing to him that all the small equipment at the disposal of SKOL, leased through the same GTLK - domestic production, and during the period of the "covid" lockdown, the organization did not receive a penny of budget money support. Unlike the same Aeroflot and UTair.

Is the former head of the Ministry of Transport Dietrich walking widely? And is it naive for the airline management to appeal to the same Vitaly Savelyev, who in the "ministerial" days of Dietrich headed Aeroflot? Looks like they worked really well back then. And if Dietrich scored a move, then certainly not Saveliev will insert sticks into his wheels.

So what makes all the boron cheese? It's simple. SKOL is one of the few really sought-after private airlines that earns a lot from government contracts. Today, their portfolio is already 11.5 billion rubles - mainly for the transportation of passengers and cargo in inaccessible areas on the outskirts of Russia. 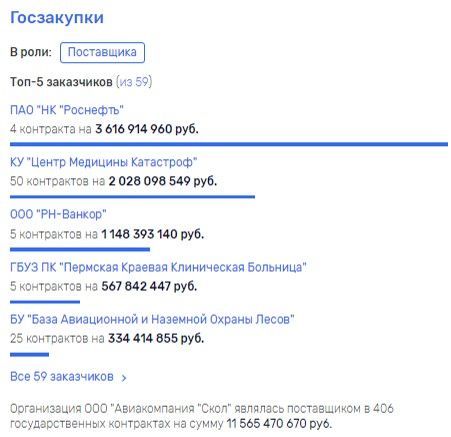 Litigation between GTLC and SCOL has been going on for quite some time. In total, the state corporation filed three lawsuits, one of which, in the amount of 477 million rubles, was satisfied last October. But only at the end of April 2021 in the situation began to look through another interesting thing, except for the GTLK. This is Vladimir Bogdanov's Surgutneftegaz, already mentioned by us at the beginning, or rather, one of the largest Russian airlines UTair, whose shares are owned by Surgutneftegaz NPF.

Now formally, Surgutneftegaz has no relation to NPF, and, therefore, to UTair. However, according to evil languages, the company can still control the carrier. Today, UTair is in debt, like in silks. According to rumors, it was because of the desire to withdraw the oil structure from these debts that they parted with NPFs. At the same time, the carrier, as before, allegedly expects financial assistance from Surgutneftegaz, as Vedomosti writes about. The takeover of SKOL could help straighten out the affairs of UTair, which is also beneficial for Surgutneftegaz.

In April, another subsidiary of Surgutneftegaz, Surgutneftegazbank, announced its intention to go to court with a statement declaring SKOL bankrupt. Earlier, the bank tried to enter the trial as a third party, but the court stopped these attempts. At the same time, the bank did not name the amount of possible claims, Interfax writes about this.

Surgutneftegazbank's claims are an almost complete guarantee that SKOL will still be drowned. And the 30% of the authorized capital proposed by the airline may not play - it seems that the GTLK aimed at a much larger percentage of the shares, which may go to the results of the bankruptcy process. Another part may fall under the control of Surgutneftegazbank - read UTair. But even if this does not happen, the main thing will happen - one private independent airline in the Russian Federation will become less.

At the same time, Surgutneftegas is one of the large customers of SKOL. If Skol stops working, UTair will be able to get contracts. But, most likely, at a higher cost. It is unlikely that budget savings are part of the plans of Mr. Dietrich and those whose interests he can lobby.

This whole story speaks of one thing - it seems that Eugene Dietrich fully settled in the chair of the head of the state corporation, where he fell from the post of minister in November last year. According to evil languages, this could be a real salvation for the ex-minister, whose surname appeared in a whole bunch of corruption scandals.

The loudest of them was and remains the scandal with the construction of the Central Ring Road in Moscow. In the summer of 2020, even when Dietrich was minister, it became known that the project would require an additional 15 billion rubles. At the same time, in 2019 it already increased by almost 3 billion rubles - and this despite the fact that the end and the edge of the work are not visible. As of the beginning of autumn last year, the first and fifth road complexes were ready for only 49% and 61%, respectively.

In total, the cost of the project under Dietrich increased to cosmic 316 billion rubles. Rosavtodor, accountable to the Ministry of Transport of Dietrich, was then led by Andrei Kostyuk, the board was Vyacheslav Petushenko. According to rumors, people completely loyal to Eugene Dietrich. Interestingly, a few months after Dietrich's transfer to the GTLK from Rosavtodor, Andrei Kostyuk quickly "relented."

And the results of the audit of the Accounts Chamber of the Russian Federation on the very project of the Central Ring Road preceded this. It contained extremely interesting conclusions. For example, as follows from the press release of the auditors, the entire volume of wood received for planting along the Central Ring Road in the period December 2018 - March 2019 was withdrawn by third parties.

Just think about it, not even ready-made building materials disappeared somewhere, but forest, shrubs. For Dietrich and those who oversaw the project, it smelled fried - so he decided to look for prospects in another structure? And then, in February 2021, Kostyuk left his post.

Prior to this, an even more high-profile scandal erupted with the Crocus International company of oligarch Araz Agalarov. She was a contractor on the first section of the Central Ring Road, but made a blunder. In response, Avtodor filed a lawsuit against the company for 5.4 billion rubles. However, soon the lawsuit was suddenly withdrawn. About this wrote Kommersant.

According to evil languages, allegedly the contract itself went to the Agalarov structure by agreement with Dietrich. Initially, the contract was concluded in general with another company - Stroygazconsulting LLC. However, for some reason, the company suddenly lost the contract to Crocus.

In 2017, Crocus even received an advance payment under the contract with a total amount of 2 billion rubles. It was this that attracted the attention of investigators, as a result of which the ex-head of Avtodor and Dietrich's protege Sergei Kelbach was accused of abuse of office. Kelbach ended up in a pre-trial detention center, but who believes that he could turn such a scheme without the approval of higher authorities?

At the same time, investigators found out that Agalarova's company used Avtodor advances in 2015-2017 not for the construction of the Central Ring Road, but simply to generate income on deposits. Did Eugene Dietrich know about this, or did everything think so?

So, if someone has a question whether Yevgeny Dietrich can lobby for the interests of large business at the post of GTLK, we propose to look into the recent past and draw conclusions on our own. Earlier, a document fell into our hands - the minutes of the meeting with the ex-head of the Ministry of Transport Yevgeny Dietrich, which may indicate the presence of corruption ties.

It seems very much that in the past an official could provide support to a small company of Enecoled LLC from St. Petersburg. As follows from the text, Dietrich instructed Rostavtodor to evaluate the effectiveness of LED luminaires developed by Enecoled LLC, conduct experimental operation of products and consider the possibility of including luminaires in purchases for the national project "Safe and high-quality roads." 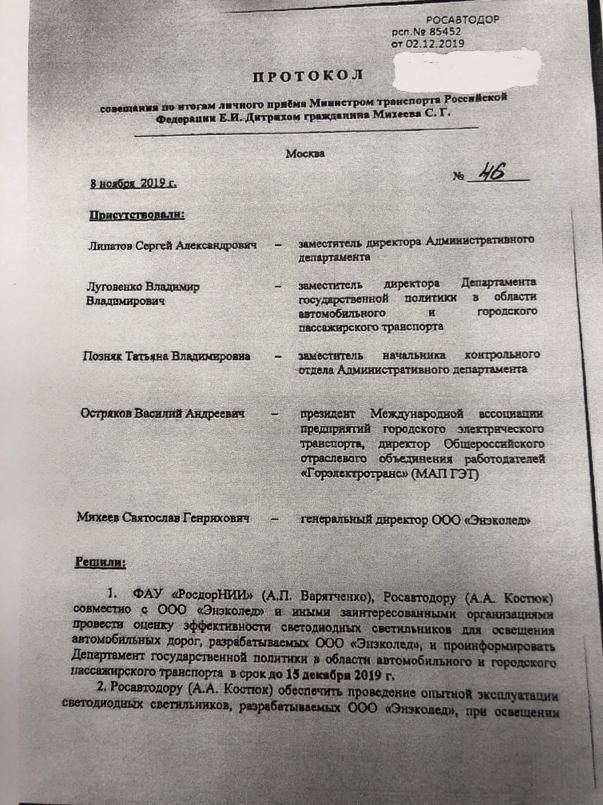 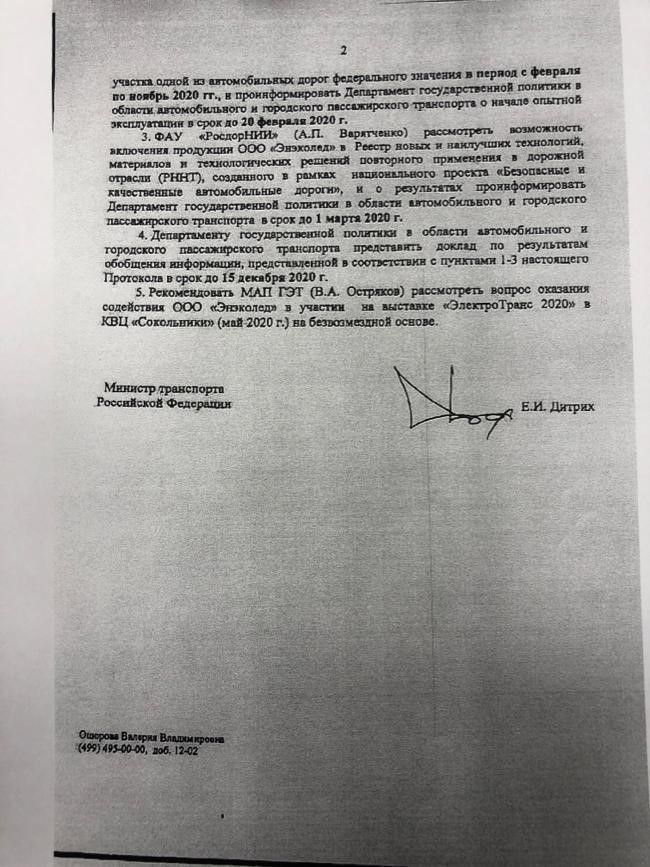 Is it necessary to say that in the event of a state contract with this structure, it will receive huge profits? And is it worth adding that not every company is awarded the instructions of the minister to evaluate the effectiveness of its products?

Then Dietrich was not at all confused that the company was created only in 2018. Only two employees work in its staff, and the authorized capital is 10 thousand rubles. And it was her lamps that Dietrich wanted to check for the possibility of purchasing under the federal program?

The latter actively promoted the Dry Superjet project - as it is believed, the favorite toy of the minister and head of Rostec Sergey Chemezov. Dietrich actively opposed the ban on the operation of these aircraft, which was demanded by thousands of people after the tragedy in Sheremetyevo d May 2019.

So why suddenly Savelyev and Manturov will support the appeal of the owner and general director of SKOL Sergey Shilov? So with a high degree of probability we will soon lose another airline - with more or less damage to the transport industry in general and the leasing market in particular.