Disrupted housewarming: security officials are waiting for Sergei Gordeev in apartments not provided to him

Could the PIK company of Sergei Gordeev "throw" the FSB in the amount of more than 1 billion rubles?

According to the correspondent of The Moscow Post, rumors spread about the possible appointment of the former head of the PIK construction corporation Sergei Gordeev to the post of adviser to the general director in DOM.RF. Recall that a few days ago Gordeev left his post in the development structure.

As The Moscow Post reported, according to some sources, Gordeev may leave Russia altogether. So it is quite difficult to believe rumors about his appointment to a large government structure (and some write that he will generally take the place of Mutko - the head of the DOM.RF).

We have already written about the rather scandalous contracts of the PIK and FSB group, where since 2010 contracts for obtaining apartments for security forces families have been under implementation.

Recall that the "Specialized Developer" PIK-Region "in December 2010 concluded six contracts with the FSB. The total amount allocated to the Gordeevsky structure amounted to more than 1.1 billion rubles. In total, 231 apartments had to be rented out. The funds were allocated from the federal budget.

According to Rusprofile, all contracts have not yet been completed, houses have not been handed over. The terms are violated for at least 10 years.

In general, out of 110 PIK-Region prisoners with various contract departments, a good half was not fulfilled. And this applies not only to apartments - in a "suspended" state, including objects of the power grid to houses.

Particular sadness is caused by purchases with the name approximately as follows: "the purchase of residential premises for the provision of citizens resettled as part of the implementation of the targeted program of the Moscow Region" Resettlement of citizens from emergency housing in the Moscow Region for 2013-2015. " I wonder where in 2022 citizens huddle, to whom PIK promised to provide housing until 2015?

Institutions subordinate to the FSB, including defense ones, are also waiting for progress from other structures of Gordeev. 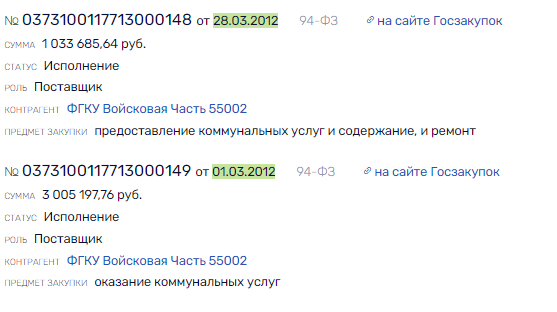 "Peak-Comfort" since 2012 cannot make repairs at the FGKU "Military Unit 55002." The term of the contract, according to the State Procurement, expired 10 years ago. From 2012 to 2015, the latter expects 12 contracts from the developer's structure. Photo: https://www.rusprofile.ru

Recall that PIK in 2021 demanded to expel the governor of the Moscow region Andrei Vorobyov from the region. "If the company sabotages the work, expel them once and for all - period" - said then the head of the region.

After that, St. Petersburg began to get nervous about the fact that the company "pointed skis" in the northern capital.

But reputation speaks for itself and even the numerous near-positive publications that began to appear on the Web will not overshadow everything that the developer's structure is accused of. As it turned out, another delay in the deadlines for state contracts is added to the overestimation of payments and unsatisfactory maintenance of houses.

That is, in fact, people who are now protecting our country from an external threat cannot get apartments due to the bungling (possibly criminal) contractor? In the current situation, the cup of patience of Alexander Bortnikov may finally overflow.

Other departments of the country also suffer from the inactivity of PIK, including the Ministry of Emergency Situations, to which PIK-Region owes apartments worth 294 million rubles from the same 2010. Gazpromovskaya "TGK-1" also cannot wait for Mayak LLC (owned by Pik-Resource and Pik-Comfort) to provide it with services for collecting receivables.

Offshore companies are periodically introduced into the PIK structure for several weeks - why, if not to withdraw funds? Did the apartments of the FSB, the Ministry of Emergency Situations and others waiting go there? Photo: https://www.rusprofile.ru

The future of PIK also seems doubtful. If you look at the financial situation of companies, as well as how often the developer's structures are liquidated or, as is customary, go into bankruptcy, then just such a scenario looms.

The Moscow Post also wrote about what tricks are used in PIK in order to preserve the "earned" money to the maximum - usually the company's structures bankrupt firms that can find a connection with the head PIK after a few "heads."

Signs of a financial pyramid in PIK were found back in 2021 - REN TV reported.

In addition, Gordeev may have problems with the criminal code after the arrest of Deputy Minister of Emergency Situations Andrei Gurovich. Recall that the latter is suspected of misuse of budget funds allocated for the construction of an antique hospital in the Murmansk region. The construction was carried out by a structure rooted in PIK - GP-Transstroy LLC.

As a result, a colossal object was created that did not meet the mass of requirements - including fire safety. It was opened with fanfare, but the hospital never received a single patient. Clinics in the Murmansk region continued to overflow, and the ugly building was soon dismantled. The damage to the budget is estimated at about 300 million rubles.

So, taking into account all the above "obligations," which can be remembered by Gordeev, DOM.RF only in dreams shines for him. We assume that in harsh reality he will more often be able to see shackles and cages, unless, of course, he has yet made an "escape from Shawshank."