"Cyber monarchy" of Malofeev: for Faith, Tsar and YouTube

An odious entrepreneur Konstantin Malofeev has started a "war" with YouTube, while it is unclear where hundreds of millions of rubles disappear in his companies.

As the correspondent of The Moscow Post reports, the TV channel named Tsargrad of the Orthodox oligarch Konstantin Malofeev asked the Prosecutor General's Office for help in restoring the blocked account of YouTube TV channel, as well as for the damage compensation caused by the actions of the service.

This looks comical. For many years, the entrepreneur, who dreamed of a kind of reactionary "cybermonarchy" on a religious basis, criticized the "collective West" in every way. Including its "spiritual" products and services of "mass zombification", which were designated as Western media and social networks.

Malofeev also struggled with inconvenient information on the web. At one time, he was one of the founders of an odious The Safe Internet League - an organization that monitored content posted on the Internet to prevent the spread of "dangerous" materials, in its opinion. Now, it seems, the content of Malofeev himself is considered dangerous.

Now, when he is "cornered" on the most popular video hosting in the world, whose servers are known to be located in California, Malofeev asks for help from the Prosecutor General (!) to return the viciously blocked account. Isn't that a joke?

The circumstances for blocking it are still shrouded in secrecy. The formal reason is related to the law on sanctions and compliance with trade rules. So why doesn't Malofeev ignore these sanctions and make his own, domestic video hosting? Doesn't work?

There is a more interesting version than the mythical sanctions. Head of Sberbank Herman Gref, who became a target for the media tools of the Malofeev's holding at the end of last year, may be behind the block. According to evil tongues, the black cat between Malofeev and Gref allegedly ran because of the release of the Besogon program of Nikita Mikhalkov, who is believed to be close friends with the oligarch.

In that release, Mikhalkov, in the manner of conspiracy theorists, sharply criticized Herman Gref and his attempts to introduce digital technologies and other "manipulations". After that, the release of Besogon was removed from TV, and Nikita Sergeyevich was sharply attacked by various media, bloggers and telegram channels, many of which clearly acted on a pre-approved (and possibly paid for) plan.

Of course, popular rumor attributed these mudslinging to "intrigues" of Herman Oskarovich. At the same time it spurred a wave of questionable discussions about "chipization", the introduction of 5G and God knows what else. Nikita Sergeyevich, it seems, also did not sit idly by, and could ask the head of Tsargrad to help him in a correspondence dispute with the official. And things got heated! 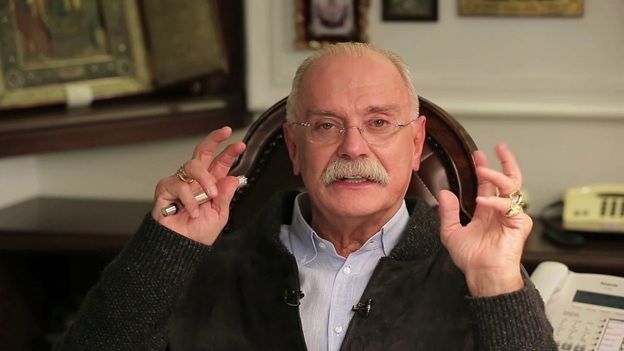 But it's all lyrics. What is more important is how Malofeev ended up in the position of an oligarch with a large media resource that can arrange a real PR war with officials of this rank.

We must admit that Malofeev is a talented person. At the age of 26, he headed a large brokerage company named Regent European Securities, then founded his Marshall Capital Partners investment group. At that time their names in a foreign language did not confuse him.

Very soon, he got about 10% of Rostelecom. According to rumors, not without the help of the then Minister of Digital Development, Communications and Mass Media of the Russian Federation Igor Shchegolev, who is supposed to be an old friend of Malofeev. Thus, Malofeev became the largest minority shareholder with a stake of almost $1 billion. And it looked like he had started playing big. A loud scandal broke out with VTB Bank.

It all started with the fact that the Rusagroprom company received a loan from VTB for 225 million rubles. It was needed for the purchase of six dairy enterprises from the Nutritek company. Rusagroprom received the money, closed the deal, and immediately stopped paying on the loan. At the same time, VTB itself believed that both Rusagroprom and Nutritek were controlled by Malofeev's Marshall Capital Partners.

Moreover, there was even a case of embezzlement of funds from the Bank. Malofeev's foreign assets in Cyprus, the Cayman Islands, and the Virgin Islands were seized, just like the stocks of Rostelecom. Lenta.ru wrote about this.

But they managed to reach an agreement quickly. VTB forgave 85% of the debt, the case was reclassified as an illegal loan, and then closed completely. It is unknown what it might have cost Malofeev, but since then it seems that his hands have been untied.

Perhaps it was then that he realized that it was time to intensively revive Russia's traditional values, using Western technologies. And he created his own Tsargrad, which has now become a large and influential, although extremely unprofitable, media holding.

"The Treasury is empty, my lord"

He began to finance his projects through the Saint Basil the Great Charitable Foundation, established in 2007, to which many people close in spirit and beliefs donated. However, according to rumors, some of the funds from these projects could go to support the capital of the "mastermind" Konstantin Malofeev, settling on accounts in foreign countries.

In the finances of Malofeev's structures, a lot of things really raise questions. Are things so bad there that in the pursuit of pennies from advertising that the channel earned on YouTube, Malofeev got to the Prosecutor's office?

At the end of 2019, the loss of CJSC Tsargrad Media amounted to 50 million rubles with revenue of 30. Already better - a year ago, he was in the hole for minus 279 million rubles. At the same time, the value of assets is more than 100 million rubles - isn't it too much for such a loss-making enterprise? 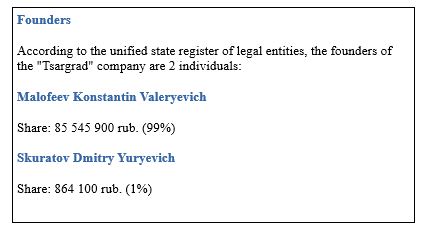 Tsargrad LLC, with Konstantin Malofeev himself as the holder of 99% of shares, has everything much worse. The result for 2019 is a loss of 653 million rubles with zero revenue. The company has only 9 employees. Surely the CEO, the accountant, a few security guards and cleaners? Where money is transferred from this structure (the revenue is zero!) - is a question that should be investigated by the tax and other authorities.

Maybe the money flows to the subsidiary of Tsargrad LLC, the Gymnasium of St. Basil the Great. There, at the end of 2019, we found revenue of as much as 261 million rubles. But the school is still unprofitable - over the same period, it went into negative by 6.6 million rubles. Two and a half hundred million disappeared?

One of the most interesting projects of Malofeev could be investments in Wex, one of the largest crypto-exchanges. However, at the end of 2018, the crypto exchange collapsed, as Meduza reported. And along with it, $450 million in bitcoins disappeared somewhere. Have they gone to replenish the deplorable financial condition of Malofeev's companies?

In addition, it is rumored that through this exchange Malofeev could Finance the Donetsk militias. However if there was a noble impulse, it quickly dried up. Evil tongues claim that these same militias were quickly turned into personal guards serving narrow commercial interests with the help of Malofeev's capital.

As a result, former co-owner of Wex Dmitry Vasiliev was detained in the case of theft on the crypto exchange in Italy. Malofeev, it seems, got away with it. 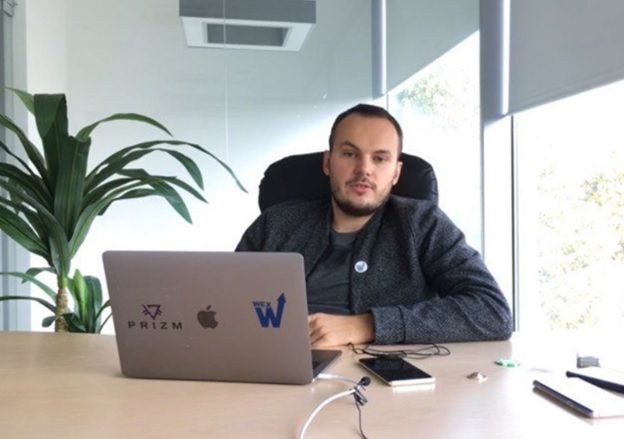 Is Dmitry Vasiliev a switchman in the case of missing bitcoins with Wex?

However Malofeev's whims cause problems not only for him and those who contact him. Recently, a wave of pseudo-nominations of district courts has swept through Saint Petersburg. Violators who sent out false messages about pseudo-dominating sent an anonymous warning that this would continue until the returning of 120 bitcoins by Konstantin Malofeev that he allegedly stole from Wex depositors.

He himself, by the way, also commented on the situation. Of course, any involvement in the disappearance of bitcoins was denied. At the same time, he continued to recall Herman Gref's Sberbank, which, they say, is waging a "cunning war" with the Central Bank. It was reported by IA Media.news.

Malofeev did not forget to mention Governor of the Bank of Russia Elvira Nabiullina, whom he clearly does not like as well. He has a whole program on Tsargrad, where the hosts repeatedly analyze the decisions of the Russian authorities in a critical way. Including the high-ranking officials mentioned above. "Dry residue", as it's called.

Another scandal that does not let Malofeev go is of an international nature. In 2016, a dispute broke out over the sale of Bulgarian Telecommunication Company (Vivacom brand).

Dmitry Kosarev, an activist close to Malofeev, also took part in it. His Empreno Ventures LTD company joined the fight for the asset. And allegedly both Malofeev and Kosarev entered their assets into the capital of Vivacom, regardless of the fact that the legal owner of the brand has already legally purchased a full block of its shares through an open auction. This was written by Komsomolskaya pravda.

They also recalled the presence of documents in the famous "Panama Paper", which allegedly lists Empreno Ventures LTD. Could millions of dollars be laundered through the structure of a person close to Malofeev?

What do we have in Malofeev's "dry residue"? An odious businessman who spent a lot of money on dubious projects, did not seem to succeed in any of them, and now goes and complains to the Prosecutor General's Office about the actions of nasty American IT specialists. But not only that. Malofeev, they say, dreams of establishing a "cyber monarchy" in the country, for which he created a Monarchist party in the past.

He's about to put himself forward as the new Russian Tsar. In the political field, he got along with various muddy personalities like the coordinator of the "Left Front" Sergei Udaltsov. The latter had already been behind bars as a result of questionable political scams.

However, if Malofeev wants to follow his example, it is unlikely that he will succeed. Because after the "war" with YouTube, it seems that no one takes him seriously.