Contracts for Kolomoisky, and what does Sobyanin have to do with it?

People close to the mayor of the capital, and Marat Khusnulin gave contracts to the Ukrainian oligarch Kolomoisky.

The leadership of Ulan-Ude unexpectedly terminated the contract for the reconstruction of treatment facilities with the company "IBT." This is evidenced by data from the Procurement Contour website. It happened on July 7th. And yesterday they wrote about this in the media, but on the same day the article was removed, and even from the archive.

Does anyone want to draw attention to the scandalous situation? But there are really a lot of interesting things here. To start at least with the fact that the contract costs not a lot, not a little - 13 billion rubles, was received by IBT without a tender, and just three weeks ago an additional agreement was concluded to the contract. According to the document, the contractors included a subcontractor - Ulan-Ude LLC "Setstroyproekt." Everything seemed to indicate that the parties were preparing for cooperation.

And suddenly - breaking the contract on formal grounds (unilateral refusal of the customer to fulfill the contract in accordance with civil law) and further actions similar to an attempt not to draw attention to history. The Moscow Post correspondent in Buryatia understood the mysterious story.

From Cyprus to the estate of Kolomoisky

It does not seem that this was a banal scheme for withdrawing budget money, since, according to information from the Public Procurement website, in fact, the customer did not pay anything to the contractor.

Interesting lies in the structure of the founders of "IBT." Now the company is registered for two offshore companies - the Cyprus COMPANY VILEN LIMITED and VOLAHAN INVESTMENTS LIMITED.

In February 2015, Izvestia published a large whistleblowing material in which they told how Ukrainian contractors, geographically connected with oligarch Igor Kolomoisky, make money on the construction of the Moscow metro, despite the assurances of Deputy Prime Minister Marat Khusnullin about the termination of contracts.

The list of those about whom the journalists wrote also included "IBT." At that time, some of the shares in the company were with structures affiliated with the Moscow government, some with Interstroymontazh. At the same time, the tunnel-building Dneprotyazhmash, a subsidiary of Dneprotehservice, received contracts, the main enterprises of which are focused on the Dnipropetrovsk region, the governor of which was then oligarch Igor Kolomoisky.

The latter, by the way, may have interests in Russia in the tobacco business. The Moscow Post covered the story in detail earlier.

Interstroymontazh was at that time one hundred percent "daughter" of the Ukrainian company Interbudtonel. The latter, according to the authors of the Passenger Transport website, allegedly belonged to Ukrainian businessman Vladimir Petruk in 2018. Now his name appears on the Web as the president of Interstroymontazh.

Ukrainian publications called Petruk "a friend of the Kremlin," receiving contracts from Moscow Mayor Sergei Sobyanin, who, with his Interbudmontazh (a holding that includes Interbudtonel), sits "one fifth point on two chairs of the Russian-Ukrainian war." Implying, apparently, that his firms are getting contracts from the governments of both countries at a time when they are in a tense relationship.

They say Petruk is also friendly with the Ukrainian elites. Including with the mayor of Kyiv Vitaly Klitschko. Perhaps that is why in 2019 he was considered as a builder of a metro line in Kyiv. According to the Ukrainian publication Actual Truth, earlier his company won tenders without competition for various contracts in the capital.

In general, over the past few years, nothing is especially heard about the businessman. Spiteful critics assure that he thoroughly cleaned up information about himself in order to continue to conduct a "polygamous" business and not become the object of attention of law enforcement services.

Moscow government structures in 2016 left the founders of IBT. From 2017 to 2019, the company was registered at Interstroyinvest LLC, which belongs to the SHIELD HOLDINGS SH GMBH offshore company, which entered the structure of its founders immediately after Interstroymontazh LLC left it. The latter, by the way, is now also registered at the SHIELD HOLDINGS SH GMBH and is connected with IBT through a chain of founders and leaders. 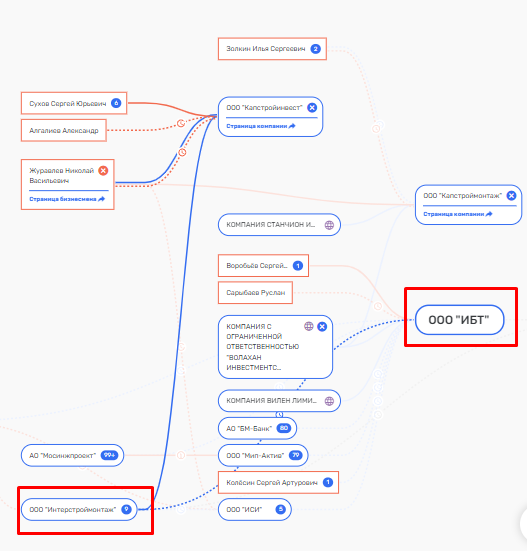 IBT belongs to VOLAHAN INVESTMENTS LIMITED, which also controls Kapstroymontazh LLC. The head of this organization, Zhuravlev Nikolai Vasilievich, at one time headed Kapstroyinvest LLC. The latter is registered at Interstroymontazh LLC

Behind the mass of offshore companies in the structure of affiliated organizations are mainly citizens of Cyprus. At the request of Natalia Kostyuk (the name of the director of the offshore company VOLAKHAN INVESTMENTS LIMITED, the search engine issues a profile on the social network of a citizen of Ukraine.

SHIELD HOLDINGS SH GMBH and its Interstroyinvest appear in the media as beneficiaries of the Urban Stories construction project. The scandalous long-term construction of JSC Specialized Developer TPU Rasskazovka, which disrupted the construction time and more than once became the object of attention of the state construction supervision in Moscow. Judging by the article presented to the developer in court (part 1 of article 9.4 of the Administrative Code of the Russian Federation), he either did not fulfill the requirements for documentation, or violated the mandatory requirements for construction of the building, including construction materials.

This project was accompanied by some problems with the Federal Air Transport Agency. The fact is that the construction was carried out in aerodrome territories, and, apparently, the high-rise regulations in this case caused disputes between the department and the developer. On this topic, indirectly defending the project, Khusnullin himself spoke out, reassuring worried equity holders with the words that "everything is settled there, they are completing, they have received all agreements with the Federal Air Transport Agency, they must start building the second stage in the near future."

Everything converges on Sobyanin and Petruk?

By the way, if you look at the history of the founders of the developer, it turns out that the company from 2017 to 2021 was supervised by the Mosinzhinvest organization, affiliated with the Moscow government.

Thus, it turns out that Sobinin and the company can be related to IBT, which is affiliated with SHIELD HOLDINGS SH GMBH, since the latter was the beneficiary of City Stories?

This is indirectly indicated by the fact that most of the company's state contracts were received precisely in the estate of the mayor of Moscow. 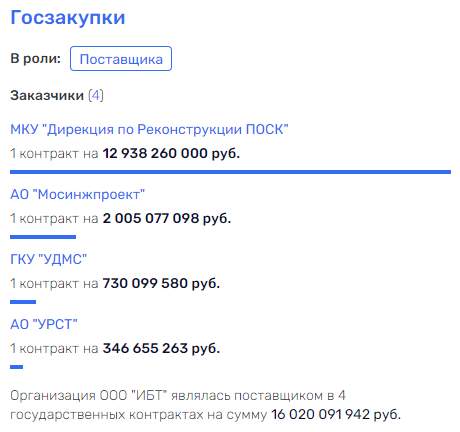 Moreover, in the aggregate, all the facts collected suggest that IBT and other companies from the structure may still partially belong to Mr. Petruk, who, for certain reasons, is not particularly eager to cover his interest in the project.

By the way, after the Izvestia article, IBT, according to Kontur Procurement, still continues to work on the construction of the Moscow metro. Moreover, the company entered into new contracts. Ulan-Ude officials, apparently, were frightened. But Sobyanin does not leave his own?

True, if we compare the facts indicating that Petruk also works with Ukrainian government structures, and may also be close to Mr. Kolomoisky, (accused in Russia of creating two punitive battalions and involvement in the killings of civilians in Donbass) for work in the Moscow metro, it turns out that the head of the Moscow mayor's office, supporting the structures of Petruk, is indirectly related to the financing of the unfriendly regime against which the Russian Federation carries out a special operation?

Business is a business, but this is already too much...

06 September, 8:07
On the "needle": what prevents Sergei Gordeev from leaving in a good way?

22 August, 8:11
Mishustin and Khusnullin: who is "building whom"?
See also