"Click" on Pampina will get the result: Trump loomed behind the co-owners of tobacco assets of the SNA

The tobacco business in Russia can be "swept up" by the ex-president of America Donald Trump, in the assistants of the former politician - the ubiquitous lawyer Pampina Votsi.

In March of this year, a deal was held to transfer management rights from British American Tobacco to SNS Group of Companies, the second largest tobacco distributor in Russia. And almost immediately after that, the latter sold the asset to two individuals - Mikhail Smetannikov and Andrei Sobolev.

Whose interests may be hidden behind this series of transactions - in the material of The Moscow Post.

Let's start with the end. Smetannikov and Sobolev are clearly businessmen familiar with each other. Since 2017, they have been engaged in the company for the cultivation of agricultural crops "Participation." In November of this year, Smetannikov replaced Sobolev as general director, and his colleague remained the founder of the office.

Smetannikov was also the founder of the tobacco Vostok Invest, having received a company from a certain Igor Petrukhin, the founder of 127 organizations, which is very similar to a nominal person. Which entrepreneur in his right mind will do so much business? There is a possibility that he provided such services to Smetannikov, who, in turn, suits the interests of a third party. We will return to this.

Similarly, Smetannikov also interacted with Petrukhin through BBC EM Si Novokuznetsk LLC, as well as with a certain Krupenin Anton Valerievich through a number of other organizations. The latter is the founder of eight companies, seven of which have been liquidated, having existed mainly for a couple of years. Resembles one-day firms to withdraw money.

Will it be the same with SNS-Holding LLC?

As for Sobolev, the situation is approximately similar. There are only two "living" firms associated with it - this is SNS-Holding itself and the "Participation" already mentioned above. The rest, mainly included in the SNS Group of Companies circuit, were liquidated. In business colleagues there is another "prolific" businessman Yuri Bubnov - the head and founder of a total of about three hundred firms. 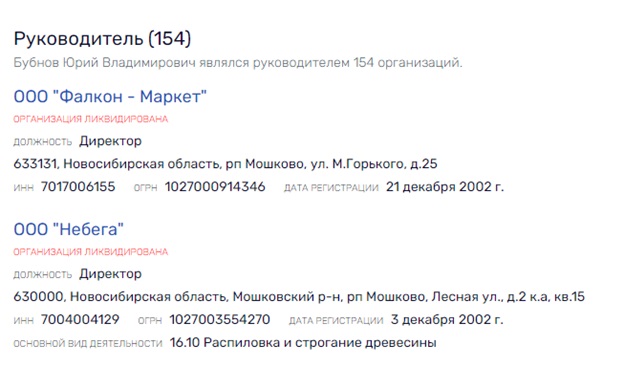 According to information from the website Accounting.kz, Smetannikov is also the general director of the Kazakh company DRAKAR, which produces computer equipment.

The office cooperates with many foreign partners. Including the American Hewlett Packard Enterprise. The company's board of directors includes a certain Charles Nosky, who in 2011-2012 was deputy chairman of Bank of America.

The same bank that, as RBC wrote, transmitted to two congressional committees, as well as prosecutors, information about Russians who in one way or another interacted with President Donald Trump, members of his family and representatives of his business structures. This means that he was immersed in the affairs of the ex-president, who, apparently, led with the Russians through this bank.

Trump, when he was still the head of the United States, nominated Joseph Otting, a former Bank of America employee, for the post of chairman of the Office of the Comptroller of Money Circulation. This was reported by Vedomosti.

As we have already hinted, there is reason to believe that Mr. Ex-President has the most direct relationship to the bank and its employees. So, it may also be interested in DRAKAR cases. By the way, it is a major supplier from the state. And in April 2017, she won a tender for the supply of equipment to AsiaCredit Bank for 46.5 million tenge (6.3 million rubles).

At the same time, she works not to say that in the clean - in 2017 the company was convicted of copyright infringement. It turns out that instead of developing her own documentation, she used someone else's (apparently, she saved money like that) - there is relevant information on the portal of the Almaty City Court.

Larry Ellison, the founder of Oracle, is also associated with Trump, which is also in partnership with DRAKAR. Many media outlets write that he openly supported the former US president. Isn't it because they had common business interests?

As the correspondent of The Moscow Post managed to find out, Trump's interests can be found in SNS-Holding and, as they say, from the other end.

The fact is that before SNS-Holding went to two controversial businessmen - Sobolev and Smetannikov, it belonged to the offshore companies of SNS LIMITED Group of Companies, the director of which, according to the Cypriot register, is Cypriot lawyer Pampina Votsi, who, by the way, is a member of the Board of Directors of several Russian companies.

Trump was going to buy a skyscraper in Moscow - the so-called Trump Tower. According to the official version of the beneficiaries of the failed deal, negotiations on the construction of the tower in Moscow were led by the head of the far from the largest group of companies "Expert" Andrei Rozov. However, the businessman's surname for some reason does not appear in the list of heads and founders of this office. 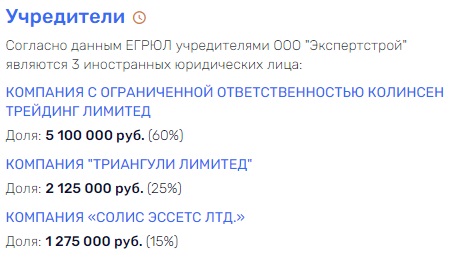 Perhaps it used to be. But in fact, now KOLISEN TRADING LIMITED is managed by a certain Anton Voznesensky. Behind "IONICS NOMINES LIMITED" is really Votsi. Who knows - maybe when rumors spread that Votsi is a real manager of an offshore company, they decided to quickly re-register him. Again - just like that, information of this kind does not appear.

Mr. Voznesensky is also the general director of two more offshore companies - Balenham Investments Limited and Carnberg Developments Limited, which are listed as the founders of Bestline. This office appears in the structure of the former founders of Experstroy. So, apparently, Voznesensky is the man of Mrs. Votsi.

In turn, the founder of Bestline is a certain Alexander Vladimirovich Vorobyov.

Usually, as experts say, such behavior indicates an attempt to evade responsibility and may indicate the presence of financial fraud in companies with which the name of the "changer" was associated earlier.

But back to Trump. Rumor has it that in 2018, the interests of Bank of New York Mellon in the field of tax legislation were lobbied by a native of Moscow, Boris Epstein, an ex-adviser to Donald Trump and a White House employee.

As the American media wrote, allegedly through the above bank in the late 90s, $10 billion was "laundered" - including part of the funds allocated as a loan to the Russian government by the International Monetary Fund.

During the investigation, a connection was proved between the washing companies and the leader of the Solntsevo criminal group Semyon Mogilevich, Kommersant wrote. Another criminal authority in the story of the affairs of the ex-president. Is this his style of doing business like this?

A few words about Votsey herself - she is no less worthy of attention than the other heroes of this material. This is a rather scandalous person, whose name is mentioned, among other things, in conversations about raider seizures.

In addition, her last name appears in the list of leaders of the mass of Cypriot firms, and she is also on the boards of directors of Transaero and Dixy Group, which are the "daughters" of Red Bell, registered in the British Virgin Islands, where she is the general director - Kommersant reports.

There is one resonant story about this. Back in 2009, Red Bell and Credit Suisse entered into an agreement to transfer shares in oil and gas Timan oil & gas (TOG) to Votsi's office.

Moreover, the then co-owner and general director of the latter found out about the deal only a week after it ended and went to court in order to challenge it. The hype was serious - a letter was even written to the head of Rosneft Igor Sechin, who was then Deputy Prime Minister of the Russian Federation.

Time passed, nothing changed, the story calmed down. Most likely, everyone remained with their own, as, in general, in the situation with the raider seizure of the Kurilovsky Automobile Repair Plant (KARZ), in which the name of Mrs. Votsi also appears, Novye Izvestia reported. The bottom line is that a certain Cortes CJSC, whose director functions as an offshore company under the management of Votsi, in 2006 achieved the arrest of the director of KARZ and, after a while, gained control over the enterprise.

They also describe the scheme according to which the so-called raiders could operate - allegedly they bought part of the plant's shares, then sold them and, on behalf of Cortex, sued the plant with a demand to recover an amount several times higher than the value of the purchased shares, saying that they were not going to sell them and Votsi's signature on the documents is a fake.

The forensic examination of the toga showed that there was no talk of a fake, then Cortex turned to another, perhaps "fed" it a little to influence the decision and he quickly hid the KARZ general director behind bars, and the plant went to Votsi.

History is further overshadowed by the fact that KARZ has now been liquidated, and, judging by its financial situation, precisely because of the lack of livelihoods. I wonder where the factory space went? Isn't any of the construction companies that claimed to build Trump Tower?

How Votsey and company are "feeding" from the state

Ms. Votsi's GC SNS LIMITED is related to a hundred Russian companies, most of which are now liquidated in connection with the accession to SNS GC. All of them were engaged in the production of tobacco products and even collaborated with the state. For example, SNS Tambov in 2013 became a supplier in the purchase of cigarettes in a pre-trial detention center. 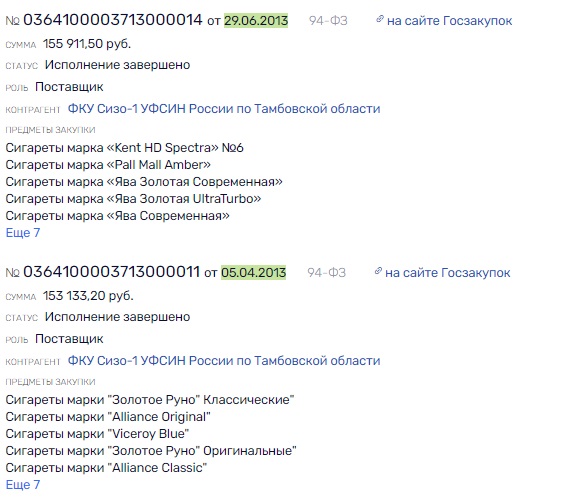 Aware of the rumors that swirl around correctional facilities - how cigarettes become bargaining chips in unspoken agreements between inmates and prison officials - the procurement raises some questions for the facility but keep them to ourselves. Still, this is not about this now.

Another office - SNS Don, collaborated with Rosneft's subsidiary - Rosneft Oil Company - Kubannefteprodukt. In 2015, they entered into an agreement for as much as 8 million rubles. Yes, the need for cigarettes is solid among government agencies.

So, as a result, in 2015, several dozen of these firms were liquidated in connection with the accession to another organization, namely SNS Sergiev Posad, the office became the successor of 88 organizations. Its revenue, kept at zero since 2011, in 2015 "grew" to 52 billion rubles. Obviously, the company had all the capital of the liquidated firms. 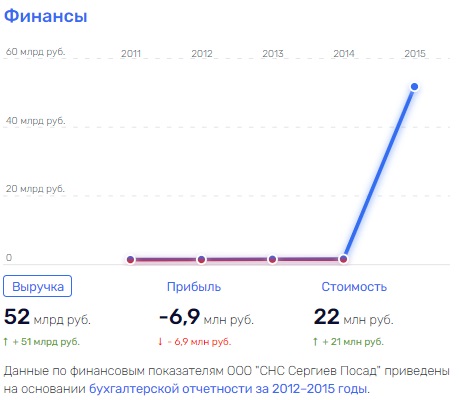 Has the office begun to develop? No, in 2017 she also "got off the radar." Moreover, its financial situation at that time was unknown - there is simply no data on this after 2015. But there is a feeling that the money that was "scraped together" from all firms into one was simply taken to the very offshore company that also stood at the head of SNA Sergiev Posad over these two years.

Thus, a wonderful company is formed from people who for several years can lobby for the tobacco business in Russia. And this company is not anyhow, but the ubiquitous lawyer with notoriety and the ex-president of America!

Moreover, not only could these gentlemen and ladies work well here, other no less interesting, and sometimes potentially illegal cases loom behind their backs, in which they could also take an active part.