The personal information of millions of Russians risks ending up in the hands of a man whose name was famous in the context of the "landromat" scandal, and 3 billion rubles simultaneously "disappeared" from the bank, of which he was listed as a co-owner.

According to The Sankt-Peterburg Post, a famous ex-banker, developer and "logistician" from St. Petersburg, and also Honorary Consul of the Republic of Guinea in St. Petersburg and the Leningrad Region Sergey Girdin  moved into a new business field. His Marvel-Distribution company has become a partner of the American Hitachi Venterra and Lexmark, as well as the Chinese Lenovo for the Semi Knocked Down of Data Storage Systems (DSS) and servers in Russia.

Moreover, later, the businessman, in close cooperation with his American friends, whose authorities are imposing new sanctions on our country, intends to produce smartphones and tablets under his own brand. At the same time, no one hides that such a partnership will help Girdin's partners to circumvent restrictions on supplies to Russia as part of import substitution. This is written by Kommersant.

Whether Sergey Girdin understands that such actions can cause damage to national economic security is most likely a rhetorical question. After all, where there is a prospect of profit, many red lines disappear by themselves for people like Girdin.

Meanwhile, the issue is much more serious than it seems, because we are talking about databases and storage systems. This means that in the future, the personal data of Russians may be in the hands of Girdin and his overseas partners. And this is the man whom detractors tried to connect with the "Russian landromat" - Europe's largest "landromat" for laundering money obtained in Russia illegally for many years.

Why this "landromat"? It is not superfluous to recall that now Mr. Girdin is the "hero" of Marvel - his own company, which is engaged in distribution and logistics. Though previously, he was one of the key shareholders of JSCB Nevsky Bank, where he owned 9.99%. It must be said that almost all the key owners had about 10% - apparently with the expectation that in case of problems, subsidiary liability would be smeared on them like butter on a sandwich. 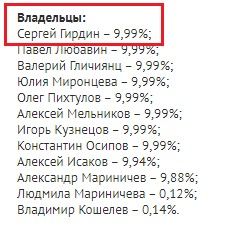 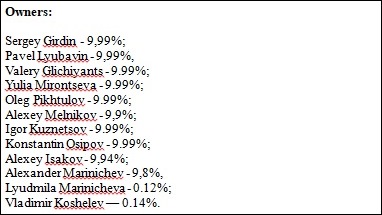 And he owned it exactly in the past - because in 2019, the bank's license was revoked. This decision was made by the Central Bank, guided by the fact that Nevsky Bank completely lost its own funds due to the theft of a significant part of its assets, and also violated federal laws and regulations of the Bank of Russia. This information is provided on the Banki.ru banking analytics service.

In short, the bank from St. Petersburg lost its license due to billion embezzlement. The hole in its capital amounted to about 3 billion rubles. As a result, a criminal case was opened, although everything was somehow unclear with the defendants. The only one who fell under the suspicion of the security forces was the acting chairman of the management board of the structure, Vladimir Bondarenko. This was written by Kommersant.

According to evil tongues, allegedly Bondarenko was simply made a whipping boy, while other members of the "football team" of shareholders safely sold their shares shortly before the collapse. Just a few months earlier, the developer Girdin did the same.

This happened in July 2019, and the reason announced by Girdin himself can only cause laughter and bewilderment. "I just assessed the situation, the depth of my immersion in banking - sufficient at the beginning of the 2000s and not sufficient during the implementation of the new policy of the Central Bank - and realized that it was time to sell this asset," RBC quotes him as saying.

For some reason, the majority of other key shareholders (Konstantin Osipov, Denis Rusakov) made a similar decision almost simultaneously. And exactly a few months before the collapse of the bank and the opening of a criminal case on the fact of possible embezzlement.

In his comment to RBC, Girdin omitted something else. Namely, that the bank was searched by law enforcement officers back in 2015. At that time, those events were connected with a criminal case on illegal banking activities against several entrepreneurs, as Fontanka writes.

And in the same 2015 Girdin got into, perhaps, the loudest scandal of the tenth years. His name began to be mentioned in the context of the so-called "Russian landromat", the largest landromat in Eastern Europe for laundering funds obtained in Russia (and not only) illegally.

Similarly, Girdin's name was mentioned in the same context in 2017. At that time Novaya Gazeta wrote that from 2011 to 2013, the Virgin Islands company Zymbeline Trading received almost $96 million, or 2.9 billion rubles to its account in the Swiss UBS AG bank.

The money came from the Moldovan Moldindconbank and the Latvian Trasta Komercbanka. Allegedly, these funds were transferred to fictitious offshore companies, in favour of which the Moldovan bailiffs wrote off money from Russia.

It turned out that the documents about Zymbeline Trading are also in the Panama Papers, which revealed many people involved in the work of "landromat". In 2008, Sergey Girdin was listed as the manager of the company's bank account.

Already in 2020, the Wek publication goes even further, and directly calls Sergey Girdin "the only surviving beneficiary of the Moldovan (Russian - ed. note, it's about the same thing) landromat".

Other beneficiaries of the scheme of the media (for example, the Kompaniya magazine) named the contractor of Russian Railways Alexey Krapivin and the owner of the Lanit group, George Gens. The latter has already passed away, and Alexey Krapivin could become a beneficiary only because his father also passed away in 2015, around whom everything, allegedly, revolved. That is, if the publications in the media are believed, there remains Girdin, doesn’t he?

From Sharkov to Gref – one state order?

Meanwhile, the scandalous businessman's craving for IT has not yet emerged. After all, the Marvel Group itself specialized in the supply of computer and office equipment, as well as other consumables. Now, as the same edition of Wek reminds, Girdin allegedly became a partner of Ozon, the giant of online trade.

However, the essence of this partnership is not fully understood: apparently, we are talking about providing storage space for Ozone, which developer is to build for his company Marvel-Logistics (part of Marvel-Distribution). The key beneficiary of the PNK Group is another scandalous character, Andrey Sharkov.

The latter is known, among other things, for the scandal with the owners of the Vnukovo-3 Industrial Park LLC, which previously belonged to the PNK Group. Earlier, the Akvion pharmaceutical company bought 4 hectares of the industrial park, but then faced a number of difficulties.

The area cost the company more than 1 billion rubles. According to rumours, they were going to return part of the funds through a VAT refund from the value of the purchased property, and pointed out to them this possibility allegedly in the PNK Group of Sharkov. Though they didn’t manage to refund the VAT from the owners of Akvion. Only through the court and protracted negotiations, they managed to do this partially - out of the initially estimated almost 200 million rubles, only 92 million rubles were reimbursed for VAT.

Subsequently, it turned out that for the construction of the warehouse, the PNK Group used a developer that applied a simplified tax system. This means that the PNK Group could simply mislead the counterparty - or they themselves did not know about it at all. If all this, including working with Ozon on warehouse space, is true, then Mr. Girdin chooses interesting partners for himself!

Where the money will go from this and other transactions is also easy to guess. After all, Mr. Girdin, apparently, is a big fan of the Western offshore economy. His parent company, Marvel CT LLC, is more than 80% owned by the Cyprus offshore company Concour Holding Limited.

This is very strange, because the company is literally bathed in state orders, and the first state institution that is in a hurry to shed a "golden rain" on Girdin's company is Herman Gref's Sberbank. Also, as it is known, a big fan of public money and the IT sector.

The total volume of state orders of the company has already exceeded 12 billion rubles. And of these, almost 9 billion rubles are accounted for by PJSC Sberbank. Another 2.9 billion rubles will go to Sberbank-Service. It is, of course, mainly about the supply of equipment and components. At the same time, according to rumours, in parallel with this, Girdin's structures are quietly credited to Sberbank. 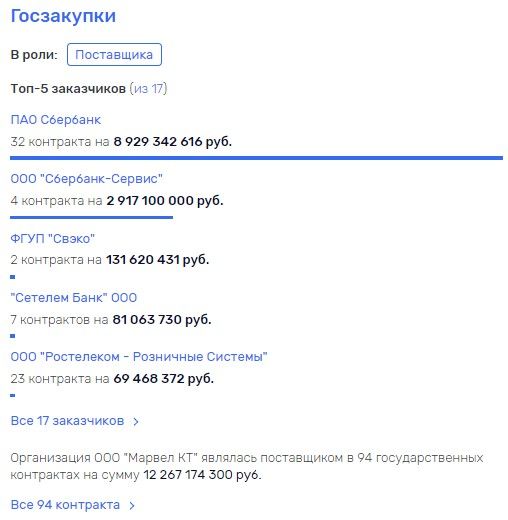 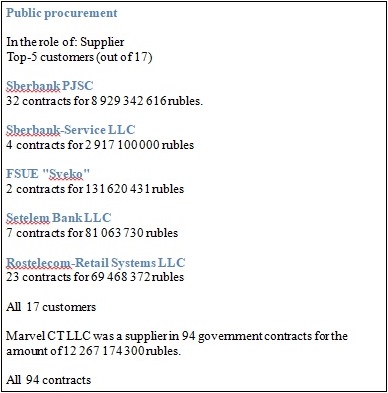 And does Herman Gref, the state, excuse me, man, know about the scandal with the "landromat"? About possible embezzlement in the Nevsky Bank? About the fact that state money can flow into offshore companies? Or about the fact that the current overseas partners of Mr. Girdin in the future, with his help, can circumvent the supply restrictions associated with import substitution?

Apparently, he doesn't know. Well, we are happy to tell him about it, as well as all of you, including law enforcement agencies. And we hope that the reaction will follow. Otherwise, all the chatter about import substitution and the fight against money laundering in our country is not worth anything, is it?