The head of Alsiko, Alexander Kazachenko, who was used to taking loans and not paying them, could direct borrowed funds to the companies of his foreign partners.

According to the correspondent of The Moscow Post, the ex-director of Promtseolit OJSC and Melor OJSC Stanislav Agamirov began to sue the beneficiary of the enterprises of Alsiko PG Andrei Kazachenko. It seems that the former top manager decided to take the side of another shareholder of the TIG Mineral Resources enterprise, which is associated with media manager Aram Gabrelyanov. Not so long ago, a foreign company accused Alsico of "raiding" the enterprise "Promtseolit," which, according to unconfirmed information, may even go "to the mercy" of Kazachenko's foreign partners.

According to the file of arbitration cases, Agamirov filed a lawsuit on August 11, but the application was left without movement until September 10 - during this time the applicant must eliminate the violations committed during the filing. From October 2015 to May 6, 2021, Mr. Agamirov worked as the head of Promtseolit OJSC and Melor OJSC and clearly did not leave voluntarily: in the statement he demands to declare illegal the decisions of the general meeting of shareholders of companies, according to which Sergey Kornev replaced him in both positions.

In addition, Agamirov wants to invalidate the decision of the general meeting of participants of Tseomax LLC (part of Alsiko Group of Companies) on the appointment of Alexander Kazachenko as general director of Tseomax LLC. But the latter, for a second, has been working in this post since 2014 - that is, he came to affiliated companies even before Agamirov and, according to duty, worked with him actively. What could have changed? 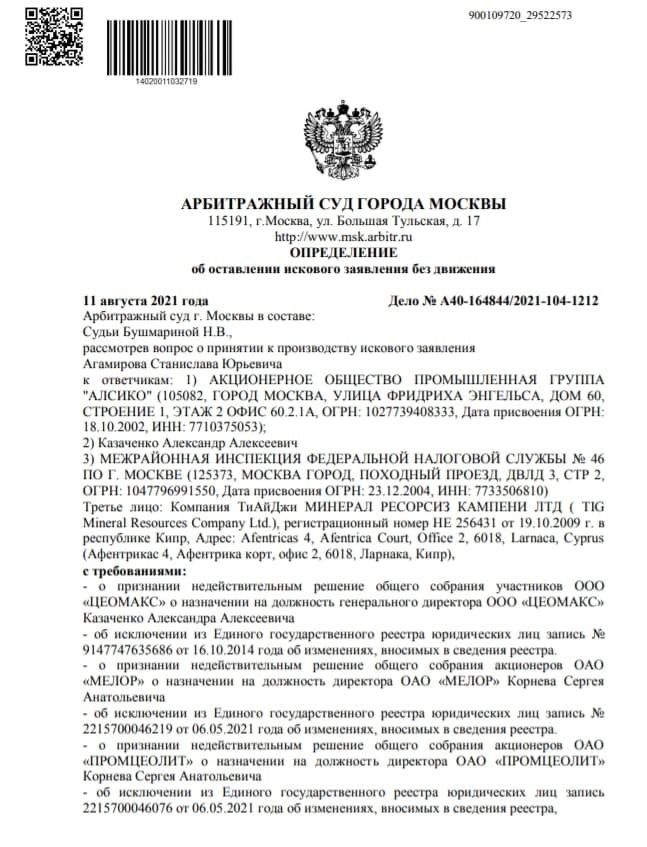 And here it is worth remembering that right now a corporate conflict of Promtseolita shareholders is unfolding (part of Alsiko Group of Companies): an investor in TIG Mineral Resources, which is associated with media manager Aram Gabrelyanov, accused the Alsiko industrial group and its leader Alexander Kazachenko of "raider capture According to unconfirmed information, Kazachenko's goal is to collect loans for the enterprise with its subsequent bankruptcy.

Loans were taken, and the money was not given away

But Mr. Kazachenko was previously really seen in something similar. And then I recall the story of Gazinvestbank, which in 2007 provided Alsico with a loan of 100 million rubles. As a pledge, the real estate of Promtseolit, which is part of the Alsico Group of Companies, was issued. In 2008, the Central Bank of the Russian Federation revoked the license from Gazinvestbank, which was later declared bankrupt.

According to Abirega, then the DIA entered the case, which in court tried to challenge the loan agreement and return the money, namely 373 million rubles. Of the 100 million loan, according to agency representatives, Alsico returned only about 2 million. At the same time, the DIA tried to convince the court that the signature in the loan agreement was doubtful, and the conditions for issuing the loan contradicted the bank's credit policy. However, these requirements were refused.

According to the database of judicial and regulatory acts of the Russian Federation, two months after receiving a loan at Gazinvestbank, it was re-issued into a promissory note, which was in the hands of the Sinarsky Non-Legal Administration. It is possible that the last company was just a face value, which then began to actively bankrupt Alsiko-Agroprom, through which operations were carried out. Could in this way try to hide something?

It was credited to Alsico and to Investorgbank, which eventually ended up in reorganization with Transcapitalbank and still sits in losses. According to unconfirmed information, the management of Alsico could conspire with the bank's chairman Vladimir Gudkov. Later, the latter was accused of embezzlement from the bank of more than 7 billion rubles, he disappeared abroad, Kommersant wrote.

In parallel with this, history developed with Sberbank. As NGS wrote, in 2013, Alsico put up for sale for 1 billion rubles the property complex of the Novosibirsk chemical plant (owned by Alsico-Agroprom LLC). The sale of the enterprise was associated with the need to pay off debts to creditor banks, among which was Sberbank, which by that time had already managed to file bankruptcy claims against Alsico PG CJSC and Alsico-Agroprom LLC.

The fact is that as a pledge, the organization provided the credit institution with a 96% stake in Alsico Agroprom, which at that time was already owed. At the same time, the assets were estimated at 1 billion rubles, although their real value could be exactly one hundred times less.

According to some information, later the same bill was transferred to Agroimpex, co-owned by Chinese citizen Lina Wang. Moreover, with the latter, Kazachenko created the general company Alsico Overseas Ltd in Hong Kong (there Alsico owns 70% of the shares in it). Earlier, The Moscow Post also wrote that now Alsico itself owes Agroimpex more than 182 million rubles - this is the same money for the bill. From the outside, everything looks as if Kazachenko managed to take control of his own debt through a foreign partner. 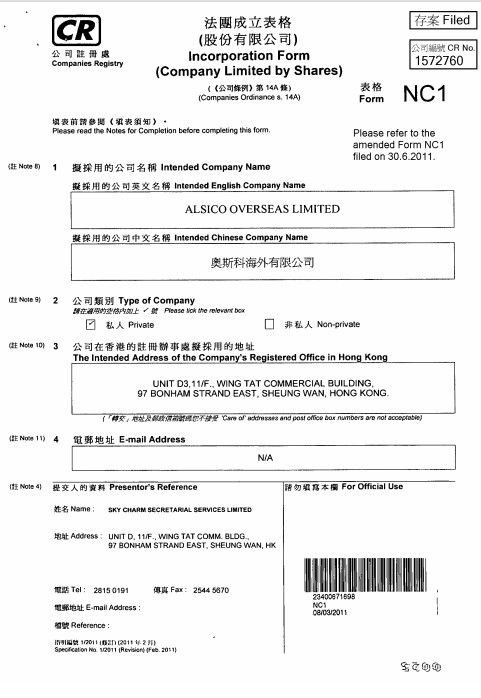 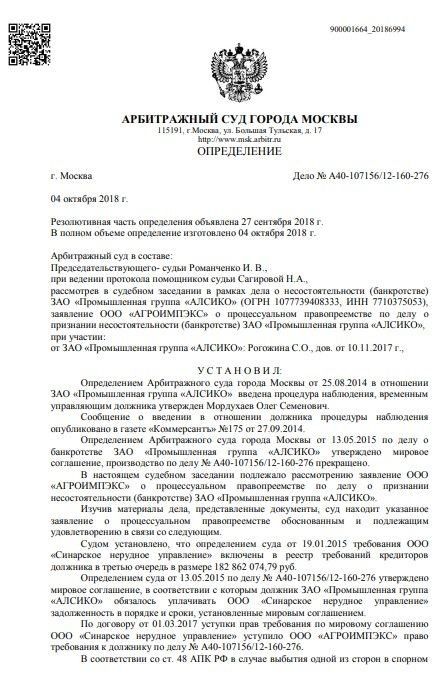 On the path of conflict

And Chinese partners can now support Kazachenko in another case. Earlier, The Moscow Post spoke in detail about the fact that Promtseolit was completely disconnected from gas for non-payment of debts. Earlier, the second shift was canceled at the plant, not fully paid with employees. There is an opinion that Mr. Kazachenko simply wants to bleed the organization in order to evade the demands of numerous creditors. And in this case, the option with the transfer of the asset to Chinese partners looks quite logical.

The problems of Promtseolit take their origins back in 2010. Then Alsico invited TIG Mineral Resources to the business, which bought 49% of the stake in the structure of the Zeomax holding. The foreign company was associated with the family of media manager Aram Gabrelyanov. Suddenly, by 2012, it turned out that OJSC Melor and OJSC Promtseolit no longer belong to Alsico. At first, they were alienated in favor of Kazachenko's late partner Valery Baghdasarov and his daughter Sabina Danielyan for 1.8 million rubles, who then resold shares for $2 million to TIG Mineral Resources.

According to Komsomolskaya Pravda, the court eventually found these transactions null and void. It was also revealed that assets were withdrawn from the enterprise, all vehicles, equipment and equipment disappeared, losses were organized, serious debts to third parties were formed.

Nevertheless, they did not say goodbye to the Cypriot company - it still has a stake in Ceomax. It is also known that LLC TseoTreydResurs is an agent through whom "Promtseolit" conducts all sales of the products. According to Rusprofail, the founder of the organization is Aram Gabrelyanov himself.

The story of Alsico gained momentum after the tragic death of businessman Valery Baghdasarov, who was considered Gabrelyanov's man. It is possible that the reason for his voluntary retirement was debt - he was owed 1 billion rubles, as he acted as a guarantor of Alsico loans. This suggests that Kazachenko can really be profitable now to bankrupt the company and get rid of assets - you won't ask Baghdasarov anything.

It seems that Kazachenko could really get a good job: to collect loans, and then write them off to other companies, the late partner or simply bankrupt debtor companies. It is possible that now, during the consideration of the lawsuit from Stanislav Agamirov, new details of interaction with borrowers may emerge.