The daughter of the leader of Azerbaijan Ilham Aliyev can use the location of the authorities of St. Petersburg, and finance projects in the city through a secret fund, which was discussed in the "Pandora dossier"?

According to The Sankt-Peterburg Post, the St. Petersburg government leased a plot on Vitebsky Prospekt to Vernisage. On this territory, located near the Kupchino metro station, they are going to build a bus station and a hotel.

According to our publication, the company "Vernisage" through several affiliates belongs to the family of the President of Azerbaijan Ilham Aliyev. According to the source, the operational management of LLC Vernisage, as well as a number of other companies in the Russian Federation, can be carried out by the team of the daughter of the President of the Republic Leila Aliyev.

Earlier, the city investment committee explained that the real investor is not Vernissage at all, this is only a sign. Vernisage LLC itself is a project company created within the framework of the international Leila-M group of companies with experience in implementing large investment projects. For example, this group built a sports complex in Baku for 3.5 thousand square meters. meters, as well as business centers, restaurant complexes and many other facilities.

According to the plans announced by the Smolny press service, the planned investment in the project will amount to 1.15 billion rubles, and the construction period will be synchronized with the provision of the site and will amount to six years. It is assumed that the hotel will accommodate 145 rooms, and parking - more than 100 cars.

The plans are ambitious, but whether they are destined to come true is a question. Leila herself, as you can assume, very often happens in Russia, where she probably meets with a variety of representatives of the elite - government, business, art and culture. In one of the last photos on her Instagram, Layla is in the company of Senator of the Federation Council Vyacheslav Fetisov.

For her eyes, she is called the holder of Aliyev's assets in the Russian Federation, as well as the connection between the President of the Republic and people with whom he cannot meet personally for certain reasons. Here Leila comes to the rescue.

She, Ms. Aliyeva, was supposed to be at the St. Petersburg International Economic Forum in 2018. It was then that Smolny and Vernisage LLC signed an agreement of intent on the construction of the Yuzhny bus station near Art. Metro Kupchino - something for which only recently the company received a site.

Then the governor Georgy Poltavchenko and the representative of LLC Vernisage Elmir Eminov took part in the signing of the documents. Moreover, if in the case of the hotel the volume of investments, as mentioned, is at the level of about 1 billion rubles, then at the bus station - about 4.1 billion rubles. The project implementation period is 2019-2024. It is assumed that in the finished form the monthly income of the investor will be from 8.3 million rubles to 11.2 million rubles.

Meanwhile, the fate of the project hung in the balance immediately after the signing of the relevant agreement in 2018. And already now it is possible to say with confidence that the contractor will not meet the deadlines - simply because he received the site for implementation only now, and not in 2019. 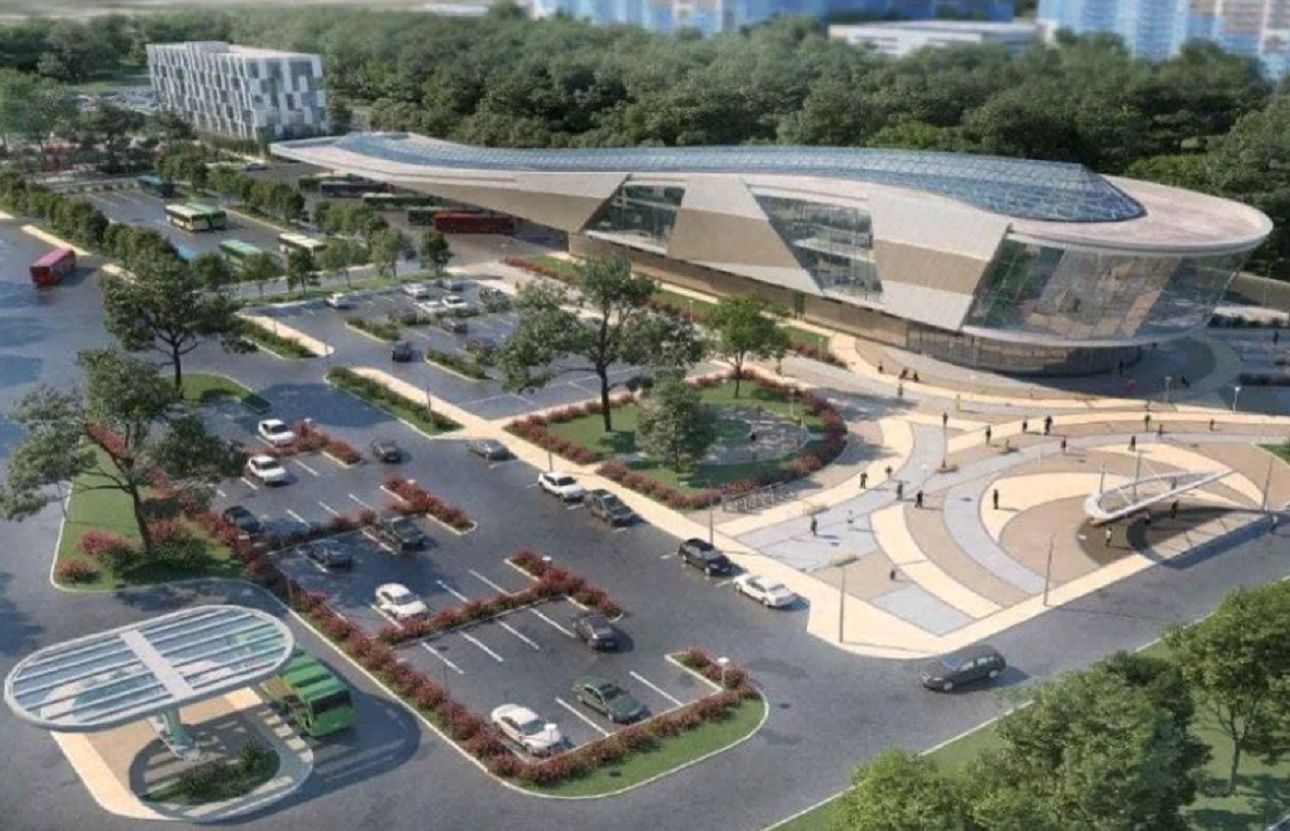 The reason for this could be the position of the new team of Alexander Beglov, who replaced the managers of Poltavchenko and audited the past agreements. However, even before that, in the same 2018, Vice-Governor Igor Albin expressed his position. He said that the companies will not allocate the site yet, because the number of employees and the authorized capital of the structure did not trust him. About this wrote Fontanka.

Albin vs. City for?

Mr. Albin is a very odious man in himself. For some time they said that he could be involved in possible thefts at the construction of Gazprom Arena, but later another former vice-governor Marat Hovhannisyan was accused of involvement in this. About this wrote "Kommersant."

Our publication has repeatedly written about Mr. Albina and claims to his work. But in the case of the investor "Vernisage" pickiness can be understood. Indeed, at that time, only one employee worked at Vernisage LLC with 10 thousand authorized capital. Give such an investor a platform of four billion, link transport links to it in the south of the Northern capital?

As a result, only in March 2019 the authorized capital of the structure was increased from 10 thousand rubles to 1 million rubles, the mark is in the Unified State Register of Legal Entities. Now he remains so, and officially only one employee continues to work in the state, which cannot but cause suspicion. The question arises, is this a fictitious firm?

It is also interesting that the company formed in 2017 by the end of 2020 did not have any revenue. There is no profit - only a loss of 1.1 million rubles, as well as a minus value of assets. Somehow, such an investor looks incongruous. However, even when Mr. Albin expressed his concern, journalists were answered from the city's property committee.

Then the officials explained that Vernissage is not interesting in itself, but as the project office of Leila-M, a company that has both experience and employees. And this company, as you can guess, is directly associated with Leila Aliyeva.

It turns out that now the investor is not embarrassed by any of the city authorities? What about other related companies? As already mentioned, Elmir Eminov took part in the signing of an agreement at SPIEF with Georgy Poltavchenko as a representative of Vernisage LLC.

He was also listed among the co-owners of Ezet LLC, which is engaged in the wholesale trade in products and drinks. Now he allegedly left the project, but the connection can be traced. The site of the company "Ezet" at some point ceased to function - if at all it worked. Earlier, Fontanka wrote that pornographic materials were posted at that address. Now the company is completely liquidated.

Is this very encouraging for those who could work with Emeev and Vernisage? By 2020, there was a full recruitment - only 14 thousand rubles of authorized capital and zero employees. The company was liquidated in November 2020 - just recently it was a year old. But on what basis?

According to Rusprofail, the company was liquidated and expelled from the Unified State Register of Legal Entities on the basis of the presence of inaccurate information in the Unified State Register of Legal Entities. Roughly speaking, linden that had nothing to do with the company. Why could this be needed by the structure associated with the daughter of the leader of Azerbaijan? Perhaps for conducting secret financial transactions and transferring to the balance sheet the structure of assets and property, which does not want to shine "officially."

Despite her political and social activities, the eldest daughter of Azerbaijani President Leila Aliyev earned herself an international reputation as a non-serious socialite lioness and party girl. Before her marriage, Aliyev was a frequent guest of elite Moscow parties, where detractors tried to attribute the use of prohibited substances to her. However, those rumors have long been dispelled, and Ilham Aliyev, clearly wanting to mate with the Russian elite, gave his eldest daughter as the heir to the trading empire, Crocus Group and singer Emin Agalarov. From there, it is believed, legs grow in many business interests of the Aliyev couple in the Russian Federation. And, accordingly, on the contrary - the Agalarovs in Azerbaijan.

However, this alliance has not existed for a long time. Despite two children, he fell apart, and Layla again returned to free life and even to political activity. Aliyev instructed her to head the Heydar Aliyev charitable foundation, but Layla could not cope with this. They say that at the session of the UN General Assembly in New York, where she was present as the head of the fund, Layla allegedly behaved very strange, took selfies and simply spoiled the image of her country and influential father throughout the world.

She, Leila, may be related to the offshore of the Aliyev family, which became known from the "Pandora dossier." It turned out that the Aliyev family and his associates since 2006 owned 84 offshore companies, which were previously unknown. About this writes RIA Novosti.Note that it was in 2006 that Leila Aliyeva married the heir to the Agalarov Empire.

According to the same data, Ilham Aliyev's son Heydar acquired the first offshore company while he was still at school. The daughter of President Arzu became the owner of an offshore at the age of 19. "At least eight of their companies received multimillion-dollar injections of money from extensive money laundering and transfer systems previously discovered by investigative journalists, the Pandora dossier said in an explanation.

According to OCCRP, some of these offshore companies have been closed in recent years, and some of the Aliyev-owned property has been sold. The center says that as of 2017, the Alievs transferred about $191 million in real estate to a secret fund that was created and controlled by the president's father-in-law.

It is possible that the companies discussed above were financed from this fund, and investment funds will be received from it for the construction of the Yuzhny hotel and bus station.