By the name of Fine, by the hands of Izbrecht, under the "roof" of Sobyanin

A1 is trying to sell property obtained as a result of a likely raider seizure.

The A1 company (owned by Mikhail Fridman's Alfa Group), headed by odious manager Alexander Fine, is going to sell Plywood Trade Center (CFT) LLC, which, through a subsidiary of Demetra CJSC, owns several plots of 13 hectares and buildings for almost 60 thousand square meters. meters on Ilovaiskaya street in the Maryino district, in the southeast of Moscow.

The buyer is going to be the Tyumen development company "Country Development," and the owners of the structure can be understood: this is a real tasty piece of Moscow land on which you can build expensive housing. However, buyers may subsequently face problems, because Demeter CJSC could get A1 by real raider seizure.

Namely, through a meeting of the owners of the structure, which, through possible abuses by one of the owners of the CJSC, a longtime associate of Fine in the A1, and now a major businessman Denis Izbrecht and a former official of the Moscow mayor's office, Vladimir Pogrebenko, could also be fictitious.

What is behind the sale of CFT and the plots belonging to the structure - the correspondent of The Moscow Post understood.

All three main participants in the transaction on the part of the seller - Alexander Fine, Vladimir Pogrebenko and Denis Izbrecht (not counting Fridman himself) - are characters involved in many real estate business scandals and can act together in the market. Izbrecht is one of the former top managers of the A1. Earlier, A1 repeatedly tried to attribute raider seizures - the company even had to make excuses on the pages of the media.

And Mr. Pogrebenko has long been firmly associated with the deputy mayor of Moscow, the head of his apparatus, Natalya Sergunina. From 2011 to 2014, he worked in the metropolitan department of city property, served as head of the department of corporate relations and financial assets. They are also trying to explain his further successes in business, as well as his proximity to government agencies - he is an independent director of Mosenergo PJSC, and participates in subsidiaries of the Federal Property Management Agency.

"Demeter" in the right hands

Plywood Trade Center LLC (CFT) does not belong to A1 directly, now 50% of the shares belong to the Alpha Investment Fund - Alfa Capital stress assets under the management of Alfa Capital Management Company. Another 25% belong to Pogrebenko, and the remaining 25% to Mr. Izbrecht 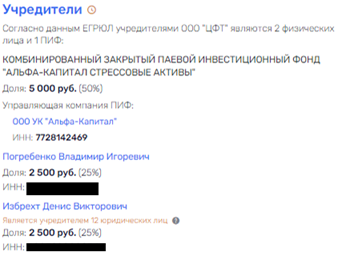 Externally, the sale of CFT does not look suspicious, if not for the way in which control over the company and CJSC Demeter could be in the hands of the A1 under the management of Fine.

It is known that Denis Izbrecht became a co-owner of the CJSC after he left A1. But initially he owned a smaller stake, a significant part was sprayed between other shareholders. At the same time, even then, ZAO was a tasty asset - among other things, the structure owned the territory of the development of the Lyublino industrial zone in Moscow.

It is believed that Izbrecht could initially act in the interests of A1 in order to transfer this asset to the structure. A few years ago, the entrepreneur held a general meeting of shareholders of Demetra CJSC to increase the authorized capital through an additional issue of shares. However, for this it was necessary to "reassure" the independent shareholder - AIC LLC, which could interfere with decision-making.

The classic scheme could be used: allegedly, the meeting of shareholders was held at the wrong address, which was indicated in the notification of the event. The register holder, Industry-REGISTER JSC, who replaced another registrar two days before the meeting, participated in this.

As a result, the share of AIC LLC in the asset fell from 33% to 5%. In response to this, the company went to court demanding to invalidate the decisions of the meeting of shareholders of Demeter CJSC. Among the third parties were declared JSC "Industry-REGISTER" and just the current shareholder of "Demerta" - LLC "Center of Plywood Trade," which belongs to Denis Izbrecht.

All this became known from court documents - they could not prevent Izbrecht's actions in the "APK," the proceedings were stopped. The election "blurred" the shares, and in August 2022 the A1 entered the capital of the CFT (and, accordingly, Demeter). Pogrebenko appeared in the capital of the CFT even earlier, in October 2021, apparently at the "invitation" of the same Izbrecht.

Considering that now the A1 under the management of Fine is trying to realize the asset, it can be assumed that all the actions of Izbrecht were initially agreed with this structure. It turns out that now they want to realize an asset obtained in a very dubious way.

This is not all that Izbrecht could do in the interests of A1. In 2015, Arcade Group bought a third of the Moscow Central Department Store. The structure was controlled by Yuri Shirmankin, the former managing director of the A1, as well as Alta management company Denis Izbrecht and Alexei Kaverin. Vladimir Pogrebenko, who had already left the mayor's office and was closely involved in business, could also help with connections.

This deal was extremely dubious, it could have signs of an unfriendly takeover, by agreement with officials of the Moscow mayor's office. It's all about the procedure: it turned out that it was closed, only one participant was allowed to bid - just "Arcade." She is expected and became the winner. Earlier, The Moscow Post wrote about that story and the role of Mr. Izbrecht in it.

In 2016, having bought the debts of the SBR Corporation, Izbrecht became the owner of the Metrika network, once one of the leaders of the Russian building materials market. The Petersburg Structure passed into the hands of the co-owners of the Alta management company Izbrecht and Kaverin, which RBC associated with Alfa Group.

Even then, Metrica's suppliers assumed that new investors would not save the network, mired in debt, but simply bankrupt it. Fontanka wrote about this. Whether it was intentional or not, the chain closed all of its stores in the same 2016. It must be assumed that her property went under the hammer - and at a higher price than the one that Izbrecht and Kaverin paid for the shares. Bought to "smash"?

From under Sergunina - to industrial zones?

As for Vladimir Pogrebenko, they are also trying to attribute actions to him in the interests of A1. The former official himself is not simple: at one time he was the head of VDNKh, where he could inherit a lot. As PASMI wrote (recognized as a foreign agent on the territory of the Russian Federation), earlier he could even be put on the wanted list.

As if the case concerned a suspicious tender for VDNKh for 70 million rubles. But in the end, the information about the search was not confirmed, and the scandal itself somehow subsided - wasn't it with the filing of Deputy Mayor Natalya Sergunina, who oversees the department where Pogrebenko previously worked?

Many scandals were also associated with Sergunina while working with Pogrebenko. The main thing falls precisely at the time of his work. There were rumors that the family of the vice-mayor of Moscow could receive over 1 billion rubles through an unrealized development project of the Khodynsky field. If this were true, who, if not Pogrebenko, who was involved in property and land relations, could help in this?

Also, during his period of work at the mayor's office, Pogrebenko took the post of director of the State Unitary Enterprise "Moscow," on the balance sheet of which there were several pavilions of VDNKh. According to the results of managerial talents, the State Unitary Enterprise went bankrupt, and before that, under the leadership of Pogrebenko, it could issue interest-free loans for 200 million rubles.

The big question remains where the former official in April 2021 found 1 billion rubles to buy out the Moselectroshchit industrial zone (Electroshchit LLC), which just during his work in the mayor's office changed its zoning and "suddenly" became suitable for residential development. 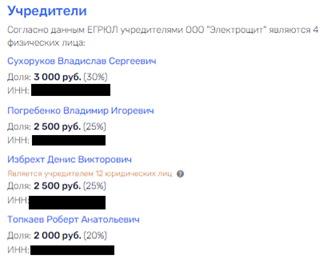 Now Pogrebenko's partner in Electroshchit LLC is none other than Denis Izbrecht. And here you can see the interest of the A1. Soon the site will be handed over to the "laying" of the investment group, and already it, under the leadership of Mr. Fine, will find an investor and be fabulously enriched?

As for the head of the A1, Alexander Fine, it very seems that he has recruited himself "effective managers" who work on the side, using their connections and influence in the interests of Friedman's investment group. At the same time, A1 is called almost the heir to Rosbuilding, a structure that in the past (as now A1) tried to attribute raider seizures.

Moreover, apparently, this can be done under the auspices of the Moscow mayor's office or even personally the mayor Sergei Sobyanin. Why? We do not undertake to judge, but earlier the former co-owner of the SDI development group Ilgar Hajiyev told The Facts YouTube channel that the Moscow mayor allegedly has 12% of all capital transactions of large businessmen. Perhaps this applies to both developers and investment companies...

If you put it together, an unsightly picture looms. A group of investors who are associated with A1 past and many companies can act using dirty methods in the market. And all in order to fish out and then transfer assets worth billions of rubles to the Fine-managed structure - for further resale with a large margin.