Vladimir Yevtushenkov closes his financial money, which he owes to his own contractors?

The hotel company Cosmos Hotel Group (CHG), a member of AFK Sistema Vladimir Yevtushenkov, has terminated the agreement with the operator Marriott International to manage the Courtyard by Marriott hotel in Moscow. On the part of CHG, the rupture of the transaction is commented on in a positive way - allegedly this will help strengthen the company's position in the Russian market.

CHG is so sin to complain, it is one of the largest Russian hotel operators operating in addition and far beyond the country. During its existence, the company changed the form of ownership several times. In the process of one of these perturbations, the Serebryany Bor company was separated from it, which, apparently, is engaged in real estate management of Yevtushenkov's structures in Serebryany Bor near Moscow.

There is an interesting story about this, in the details of which the correspondent of The Moscow Post in the Moscow region understood.

The company is now managed by Sistema Telecom Assets LLC. Serebryany Bor itself also has a subsidiary office. It is called Serebryanyi Bor Complex LLC. She is actively suing a certain Garnet LLC, which was a contractor for the construction of an oligarch Vladimir Yevtushenkov in the company's territories. "

Garnet believes that its services are not paid by the customer in full. The bottom line is that during the execution of the contract, the customer begins to change its terms, for which the contractor asks for a recount. He seems to agree, but then does not transfer the money that he pledged to pay from above. This follows from the description established by the court, and the truth resembles some dubious scheme in order to save money on orders. What normal customer will constantly change the terms of the contract during its execution? And this situation is not isolated.

More often, claims are simply sent back or left unsatisfied. For example, the situation is indicative when Serebryanyi Bor ordered construction and installation work from Garnet in the Klinsky district, the rural settlement of Nudolskoye, near the village of Narynka, ow. "Emerald Forest" in the amount of 50.4 million rubles.

As the representatives of Garnet indicated in their statement of claim, in the process of work the defendant made a number of changes and additions to the improvement and landscaping of the territory.

The plaintiff fulfilled all the wishes of the customer. During the handover of works under the contract, difficulties arose in agreeing on new works, their volumes and cost. As a result of the negotiations, the parties 07.02.2020 commission determined and approved the scope of new work, as a result of which the "List of the scope of work performed (new types of work/material replacement) under the contract" was compiled.

The total cost of the work performed amounted to 72, 8 million rubles. Thus, Serebryanyi Bor had to pay another 25 million rubles "from above," which it did not. Moreover, during the period of work under the contract, the plaintiff identified and eliminated a number of defects in the technical documentation, which is confirmed by a number of emails, for which Garnet allocated another 3 million rubles out of pocket.

So, the court ruled that the plaintiff's claims were unfounded, because he did not provide evidence that the documents for changing the terms of the contract were signed by the defendant's representative. 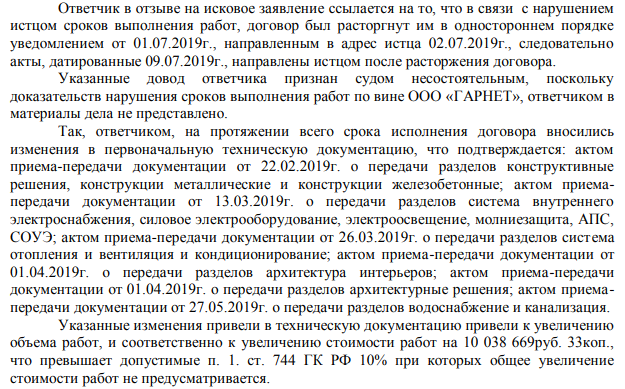 The defendant refers to the failure to meet the deadlines for the delivery of facilities, due to which they allegedly terminated the contract and did not pay the contractors, although before that, from the position of the plaintiff, they asked him to make changes to the project documentation, which caused the delay. Photo: https://kad.arbitr.ru

Who is right, who is to blame, it is not for us to judge. Only Garnet, according to Kontur Procurement, is on the verge of bankruptcy, and Yevtushenkov's AFK Sistema enterprises are nominally flourishing.

Despite, by the way, the considerable debts of Vladimir Yevtushenkov himself, which he is not clear how he will close. Even if he managed not to pay the same Garnet at all, the saved funds would still not be enough to cover the debts of the companies. And a natural question arises - if you do not like how Garnet works, why do you conclude contracts with it again and again? 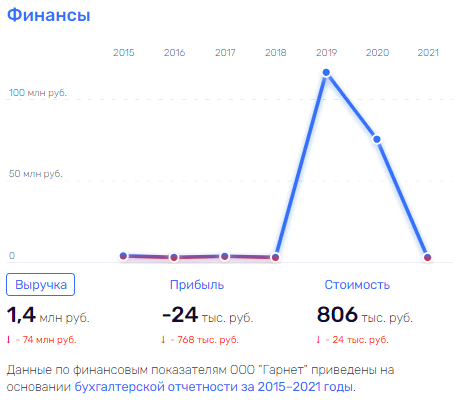 Maybe that's why the AFC board of directors leave the iconic members? The other day, the former acting chairman Anna Belova and the scandalous, but rich and influential David Yakobashvili left him of their own free will. Independent directors Roger Mannings, Etienne Schneider and Ron Sommer also resigned from the council. Well, their outcome can still be attributed to anti-Russian sanctions. Actually, Yevtushenkov himself and Anatoly Chubais, who was in independent directors, left the council.

As the latter, being such an odious personality in Russia, he was generally hired by him - a separate question. Apparently, Yevtushenkov's public opinion is not interested in the word at all.

Therefore, the question arises - is the System even able to survive under conditions of sanctions pressure? Taking into account the fact that until August 2021 it was tied to offshore, and then was forced to liquidate most of its subsidiaries. 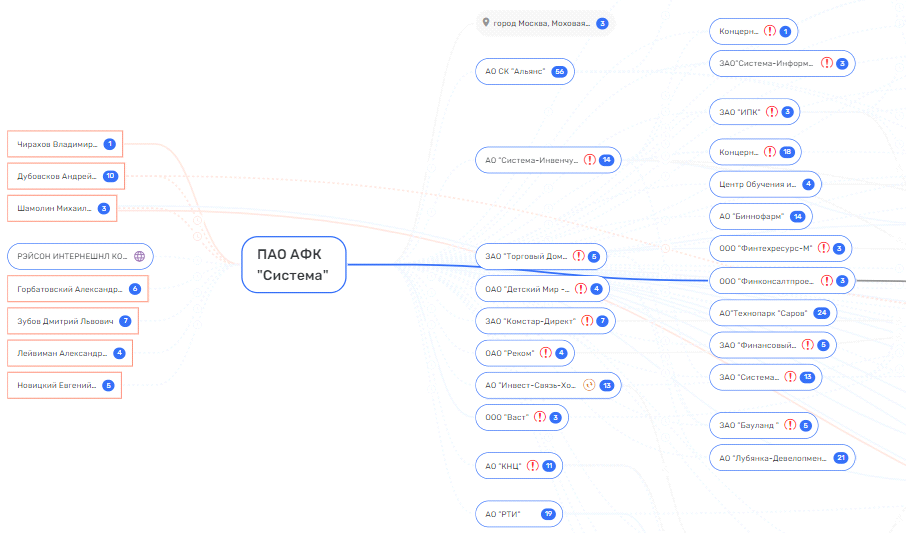 But back to the Silver Forest. It is known that this is a specially protected natural area in the north-west of Moscow, which in Soviet times was ruled by Mosdachtrest. This company was privatized by AFK Sistema in the 90s, and then privatized the land managed by Mosdachtrest.

After Yevtushenkov "entered" Serebryany Bor, strange events began to take place there, which others could even consider a raider seizure.

The story with the family of the legendary pilot Valery Chkalov is indicative - his family's house is located in the very heart of the reserve. In 1993, Mosdachtrest privatized the site along them, and then dismantled the 73-meter fence of the Chkalovs' dacha and took a piece of the site for construction, Novye Izvestia reported.

The family turned to State Duma deputy Varennikov with a request for protection from it is not clear how the Yevtushenkov structures that turned out to be the owners of their site. Varennikov wrote to the then mayor of Moscow, Yuri Luzhkov, who, in turn, sent a demand to the Department of Land Resources to understand the survey and return the plot to the family. Helped? Hardly. They replied that the house was dilapidated, it was time to demolish, and Mostotrest's property was rightfully. So "walk," good gentlemen!

By the way, Luzhkova and Yevtushenkova have family relations - the latter is married to the sister of the former mayor. So, if anyone could then be instructed to "hush up" the case, it was just Yuri Luzhkov.

And all this despite the fact that the dacha to the Chkalov family stood out by the resolution of the Council of People's Commissars, that is, the government, and it is indefinite. In fact, either Prime Minister Mishustin or Russian President Putin can deprive the Chkalovs of their dacha. But the Moscow authorities completely ignore this issue.

Now the dachas in Serebryany Bor are owned by Yevtushenkov himself and his son Felix. There is also real estate of the ex-president of Lukoil Vagit Alekperov, relatives of the head of Rosneft Igor Sechin and Secretary of the Security Council Nikolai Patrushev. Recently, the site there was bought by the mobile operator MTS.

So far, conflicts are constantly taking place around cottages in Serebryany Bor. According to the former president of AFK Alexander Goncharuk, it's all about too strict regulations. "Even a nail cannot be driven in without permission," Cnews quoted him as saying.

In 2010, the Moscow authorities through the court achieved the demolition of several cottages built by Mosdachtrestrom - they were declared unauthorized - reported Lenta.ru.

Is the money over?

Recall that in 2014 Yevtushenkov was taken into custody on charges of money laundering in the case of the purchase of Bashneft by AFK structures, Forbes reported. Very soon, however, he was released from house arrest, and the case was eventually closed - no guilt of the oligarch was found.

But the Bashneft company itself soon found itself in the contour of Igor Sechin's Rosneft. And there are still insinuations on the market, as if in that situation a possible agreement between Sechin and Yevtushenkov could have a place. For which the latter allegedly could receive compensation. A kind of compensation for the "hassle" and "costs" associated with criminal prosecution...

Of course, no one can confirm this. But if there were "compensation," then is it not on them that Mr. Yevtushenkov began to actively buy assets?

Only if so, then the entrepreneur was very carried away. Now Yevtushenkov is so "drowning" in debt that soon, it seems, he will no longer be able to pay for them. And then there are court cases from all sides, dissatisfied creditors and counterparties left without money.

31 August, 9:13
Like Zavivaev about chess, or Soyuz Marins Group at the distribution
See also