Burning evidence: Umakhanov did not understand the word Singer

The fire at the Podolsk Electromechanical Plant could have been provoked by its owner, ex-State Duma deputy Umakhan Umakhanov, in order to hide the theft at the state defense service.

Yesterday, the Podolsk Electromechanical Plant (PEZ) caught fire in the Moscow region. According to the latest data, the combustion area reached 2.8 thousand square meters. m. Now the fire has been extinguished.

As the correspondent of The Moscow Post in the Moscow region managed to find out, what happened could be a banal fraudulent scheme to hide theft.

Operation "Heat the State" from Umakhanov

According to information in the media, the majority share of the plant's shares belongs to the State Duma deputy of the VII convocation Umakhan Umakhanov. Another 20% is controlled by Rostec.

In 2017, it became known that the PEZ entered into bankruptcy proceedings, which led to the threat of disruption of the state defense order. After all, PEZ is not just an enterprise for the production of soft toys. Components for anti-aircraft missile systems of the Tor M1, Buk M1 (M2), Strela-10 type and other parts of the military-industrial complex are made here.

The responsibility is colossal, but the owners could not pull it. Or was everything originally conceived?

At that time, the company was not even able to pay off creditors, despite stable state financing. Yes, what to say - even the operation of the boiler house PEZ could not provide - as a result, residents of the whole microdistrict were left without heating and hot water in winter.

Bankruptcy is still dragging on, even despite the presence of Umakhan Umakhanov's assets, which are able to "improve" a strategically important enterprise. We are talking about the Labyrinth shopping center with an area of ​ ​ 6 thousand square meters. meters on Rublevo-Uspenskoe highway. This asset in 2017 was estimated at 1.5 billion rubles. Almost such an amount shortly before the announcement of bankruptcy, PEZ borrowed from Sberbank. The debt, of course, did not return. It doesn't matter - the state will pay. Due to which, it seems, Mr. Umakhanov is used to "leaving."

But literally a year before the bankruptcy of the PEZ, he pompously advertised the beginning of cooperation with the Dagestan plant "Dagdizel." We must think that the failure of the state defense order can now be blamed on the partner?

Not a single PEZ

In addition to this asset, Umakhanov is credited with owning Loko-Service LLC, which in 2017 won a multi-million dollar in a row for repairing locomotives for Russian Railways. Since the same 2017, the company has not shown any revenue. As if it was specially created for this particular project, and then it was thrown as unnecessary, and all the money was withdrawn. Some pattern is beginning to emerge...

According to the authors of the Spbdays website, allegedly the head and founder of Iordanidi Georgy Anatolyevich is a metropolitan friend of Umakhan Umakhanov. Photo: https://www.rusprofile.ru

Umakhanov's main asset is Zhukovka*****. And although, according to the Unified State Register of Legal Entities, the ex-deputy left the management of the company, in fact he can still stand behind the company, re-registering it as nominal owners.

Until recently, agro-assets, Agro-Invest, were registered at Zhukovka*****. Now it belongs to the liquidated LLC In-Invest Group Management Company (this company is registered with Umakhanov's wife Naida Magomedov) and Prospekt LLC (about which a note was made to the Unified State Register of Legal Entities about the unreliability of information: allegedly Prospekt is not the founder of Agro-Invest).

Agro-Invest, in turn, has never paid taxes. However, Russian Prostory LLC is also receiving, shares in which are distributed between Umakhanov and his wife. And this is despite the multi-million dollar revenue, which, by the way, has recently begun to decline rapidly. And there is an explanation for that. But before you go to it, you need to do an important remark.

In the same boat with the Magomedovs

It is believed that behind Umakhanov are once extremely influential brothers Ziyavudin and Magomed Magomedov (who were taken into custody in 2018 for organizing a criminal community, fraud and embezzlement). Since the ex-deputy himself is married to their sister and has several joint business projects with this family. For example, the large agro-technopark "AgroDag-Italy" in Dagestan. Which, by the way, was also implemented in the format of public-private partnership. (I wonder how many state millions went into the wrong pocket?)

Therefore, when the cases of embezzlement of money during the construction of the Arena Baltika to the ChM-2018 began to rattle the other day, Umakhanov, according to some information, hastily left Russia. The fact is that the general contractor for the preparation of the territory for construction was Globalelektroservice, which is part of the Summa group of the scandalous Magomedov brothers. It is likely that the family, together with Umakhanov, could have had a hand in the theft of 500 million rubles, in which the former Minister of Construction of the Kaliningrad Region Amir Kushkhov and his colleagues are suspected. 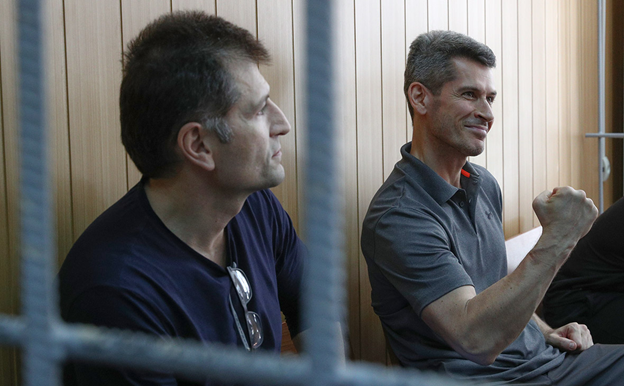 Given that all episodes of fraud are about to be sentenced to brothers who want to be imprisoned for more than 20 years, there is every reason to believe that the Magomedov empires, and, accordingly, Umakhanov, are coming to an end.

Hypocrisy in all its glory

In this case, it is obvious that it is time for Umakhanov to curtail business in Russia. He is in debt, his enterprises are bankrupt, and now a criminal case is supposedly looming. There are rumors that he has already left Russia.

By the way, Umakhanov was one of the ideologists of the law that officials cannot have foreign assets. True, his family found a mansion in Spain a few years ago and the construction company Finn Zhukovka Oy in Finland. Apparently, the law does not apply to Umakhanov.

In this regard, the fire at the PEZ looks like an attempt to get rid of obligations that Umakhanov may have to the Russian state. If in peacetime it was still possible to look through your fingers at the breakdown of the state defense order, now it is becoming unrealistic.

It is likely that the dogs were "set on Umakhanov," ordering to study his activities, as they say, on all fronts. Well, it's long overdue. And taking into account all his "adventures," things can be collected almost for a life term.

It is worth paying attention to Rostec, which controls the "fire victims" of the PEZ by 20%. Under the leadership of Sergei Chemezov, the import substitution program is obviously "lame." What is the same SupeJet, which cannot be released in the right form for years. The projects that were planned are not being implemented - Vladimir Putin even drew attention to this, calling the corporation's successes "modest."

But strategically important plants are going bankrupt. And PEZ is far from the first and, one must think, not the last such asset. OJSC Zavod Radioapparatura, Central Research Institute of Economics, Informatics and Control Systems, Stankoimport Foreign Economic Association and a lot of other Rostec assets were bankrupt. The scandalous Uralvagonzavod constantly flashes in the news, on the head of which claims are pouring in every now and then - including bankruptcy.

If you put before your eyes a list of all enterprises bankrupt by Rostec, you get the feeling that bringing them to such a state is the main task of Sergei Chemezov. So the head of the state corporation worked together with Mr. Umakhanov? And responsible for everything - who will be?

As for the land on which the burned-out PEZ is located, it will most likely be given up for development to the Airplane group, which is associated with the interests of the head of the Moscow Region Andrei Vorobyov. The center of Podolsk is a rather rich platform for the implementation of a development project. So Umakhanov can also enrich himself by twice "bending" the state. Unless, of course, he is taken into custody before that.