Is the budget of the Udmurt region getting scanty due to the "scissors" of Head of the Development Corporation Konstantin Suntsov?

As reported by the correspondent of The Moscow Post, while the General Director of the AO (JSC) Development Corporation of the Udmurt Republic Konstantin Suntsov reports on attracting billions of dollars of investment to the region and on the successful work of the state-owned company he leads, the region is increasing its deficit budget.

Maybe, it is not by chance that Governor Alexander Brechalov pulled out, as evil tongues say, a former "hairdresser" in officials? Is the head of the region "cutting off" a piece with his hands now?

At his press conference, Konstantin Suntsov cheerfully talks about the successful work of the Corporation. Business comes to them with questions and money. 12 thousand calls alone were processed. Maybe small businesses just didn't know what to do in a pandemic and the Corporation was a kind of a complaint book, wasn't it?

In addition, another "secret project" is expected to be signed, and as soon as the papers are signed, it will be announced to journalists and the public.

However, from the outside, all these secrets, expectations, mythical figures haven't brought any actual sense so far. Or in this case, the investment exists, but it falls into a certain pocket, doesn't it?

In December last year, Suntsov said that if the Corporation annually brought 5% of the total investment, that would be a "super result". The day before, he suggested that this figure could be reached by the Corporation in 2021, and the results of 2020 would be summed up at the end of the year, as was written by Kommersant.

What accounts are these investments, in fact, left on?

Taking into consideration that the Development Corporation of the Udmurt Republic is a state-owned company, it must conduct all contracts through procurement. Here's the problem. Judging by the open data of Rusprofile, the Corporation was a supplier in just one state contract for all its time for 118 thousand rubles. The question is urgent, where did the Corporation get revenue of 15 million rubles, and net profit of 4.6 million rubles, and why are they not displayed through contracts? 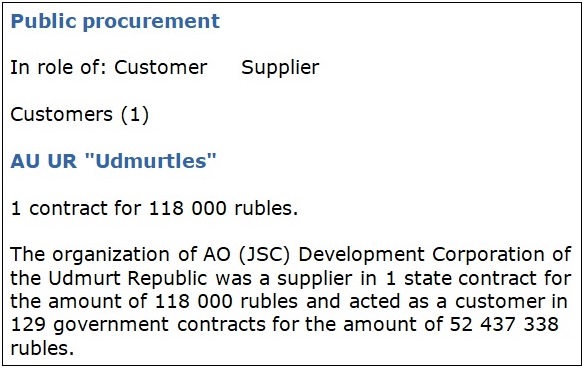 But the organization acted as the customer in 129 state contracts for the amount of 52 million rubles. Moreover, large sums were spent on providing services for placing advertising materials in electronic and printed publications, repairing premises, and some sponsorship activities. Or, for example, 490 thousand rubles were allocated for the provision of services for setting up and running advertising campaigns in Yandex.Direct services.

Only indignation can occur in such circumstances. What are the budgets, which are not available in the region anyway, spent on? And why is there so much advertising and PR for the Corporation that doesn't seem to bring much results?

By the way, auditors were already interested in the work of the Corporation, and the State Control Committee of the Republic poured out a barrage of criticism.

The auditors considered that the existence of the organization is economically impractical, due to the fact that at the end of 2018, budget investments in the amount of 60 million rubles were used inefficiently. The authorized capital of the Corporation was 135 million rubles. Of these, 65.8 million are shares in the machine-building cluster, and 69.2 million are budget investments.

However, it happened in 2018, when a Muscovite Dmitry Generalov was head of this "office". Then the organization, apparently, honestly showed a loss of 57 million rubles.

After that, according to Suntsov, "correction of mistakes" was carried out. To this work, he attributed the reduction of staff and moving to the premises that are in the Republican ownership.

At one time, Suntsov had to be responsible having to do with the Prosecutor's office of Udmurtia about why support for investment projects was not provided on the principle of "one window", there were no banal registers of recipients of financial support measures, and late placement of information about purchases in the Unified Information System was made.

According to the materials of the Prosecutor's check, the Udmurt Federal Antimonopoly Service of Russia fined the company for violations of the procurement legislation. Suntsov blamed the affairs of the former head. And he doesn't seem to have anything to do with it!

At a press conference, he boasted that they had earned a net 4.6 million rubles. And now, nothing can be expected from him, can it?

The budget is dull

Where the infusions into the Development Corporation are coming from now is not very clear, because, as we recall, it was able to earn money only on one contract. All this suggests that the organization may be used to "launder" funds. And taking into account that the Corporation is considered the brainchild of Governor Alexander Brechalov, is it clear who wins?

Meanwhile, Udmurtia is now on the verge of a huge budget deficit. Recently, a meeting of the Government of the Republic was held, where it was announced that the financial loss of Udmurtia after making new changes would reach 12.2 billion rubles. The changes meant an increase in the revenue part by 2.67 billion rubles, and the expenditure part by 7.63 billion rubles at once.

In addition, commercial loans worth 7.4 billion rubles will be attracted to balance expenses. The authorities say that this is a necessary measure in the face of declining Treasury revenues and rising costs of dealing with the consequences of the pandemic. But on the other hand, everyone is ready to "sign" for the coronavirus, which is too convenient excuse. And the fact that the Corporation shows the profit out of nowhere does not concern anyone, and it seems that it does not count that it is spending money, to put it mildly, on advertising or strange sponsorship.

There is a reason for strands

Apparently, during his hairdressing business Konstantin Suntsov learned how to "cut" and at the same time gently convince that this is how it should be. It was from there that Brechalov pulled him out, calling him to the officials. 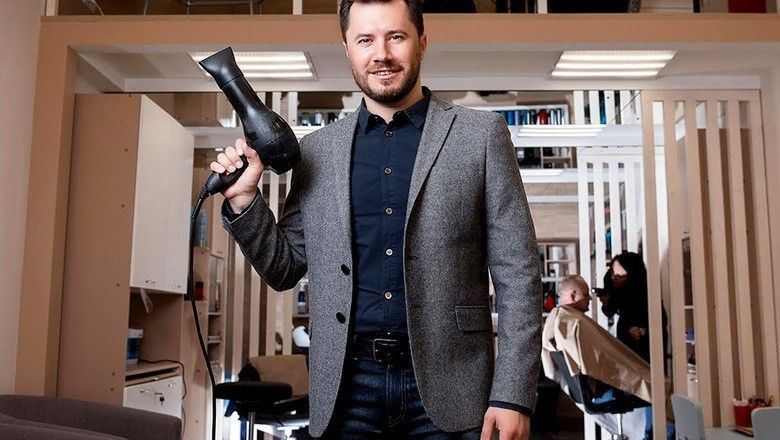 Suntsov "cuts" and does not sweat

Prior to that, he owned several large chains of hairdressers called Pryadki v Poryadke (ex - Bigudi), beauty salons called Modniye Lyudi and tan clubs called Shokolad (Chocolate). The public joked that he was a hairdresser by profession too, but in an interview with the business magazine Zhazhda, he denied this information. He said that he felt like a startup at full capacity there.

It should be assumed that Brechalov gave him a good start. For some time between businesses, he managed to be his adviser and get a loan from the Government's Entrepreneurship Support Fund, as RealnoeVremya portal wrote.

Also, that Suntsov was going to become the mayor of Izhevsk. And Mr. Brechalov directed him to this post in every possible way. But it didn't work.

It was possible to take money for the startup, but it was not very easy to help others within the Corporation.

For example, Suntsov was supposed to promote the development of start-ups of companies in the chemical, metallurgical, machine-building fields, as well as in the field of information technology. And look for geniuses for the fuel company TVEL (Rosatom GC). JSC Development Corporation of the Udmurt Republic and TVEL (Rosatom) have even signed a cooperation agreement, but that didn't go well, as The Moscow Post wrote earlier.

Brechalov has something in common with his protege: the lack of clear aims, program…

Will corruption "come" for you?

Besides, the team of the head of the region is, apparently, affected. Alexey Petrov, the Deputy Minister of Culture of Udmurtia, had not been sitting in the chair for six months when he was arrested on suspicion of receiving a large-scale bribe. He pleaded guilty in court later, as Kommersant wrote.

Is Brechalov to expect the same fate? However, these questions should be asked by the relevant authorities. Which, it should be assumed, would have something to study in the situation unfolding around the Development Corporation of the Udmurt Republic.