Alekperov's Lukoil not only allowed an environmental disaster in Komi, but could also try to hide its scale. The consequences will have to be laid out by more than one generation of the inhabitants of the Republic?

According to the correspondent of The Moscow Post, a large-scale environmental scandal is erupting in the region, including the Nenets Autonomous Okrug. Once again, PJSC Lukoil oligarch Vagit Alekperov distinguished itself - as a result of an accident at the company's oil collection reservoir, about 90 tons of oil-containing liquid leaked. It fell into the ground, and worse, into the Koivu River.

Environmentalists are sounding the alarm, the ecosystem of the river and all nearby territories were threatened. But it seems to Vagit Alekperov and his top managers anyway - the structure has enough money to pay any fine. And if it comes to bringing criminal responsibility, they will probably find "switchmen" - we could observe something similar in the case of the recent disaster of the Potaninsky Norilsk Nickel near Norilsk.

The criminal case, however, has already been initiated under article 246 of the Criminal Code of the Russian Federation (Violation of environmental protection rules during work), this was reported in the Investigative Committee of the Russian Federation. On the day of the initiation of the case, local residents noticed black ice on Koiva. Later it became known that sewage struck the Us River, which flows into Koiva.

Bottling of petroleum products was discovered on May 11 - it was then that experts recorded the depressurization of the Osh oil field pressure pipeline, on which Lukoil's subsidiary Lukoil-Komi operates. In connection with the incident, the mayor of Usinsk (the nearest city to the accident) Nikolai Takaev urgently introduced an emergency mode.

However, the World Wildlife Fund claims that oil bottling on Kolva began much earlier than May - back in March. About this writes the publication Komi Online. And if this is true, then everything is much more serious, because this would mean that the company's management could try to hide an inconvenient fact. Whether it could do this without looking back at the head office and its key beneficiary Alekperov is a rhetorical question.

But not rhetorical: what damage during the possible "ignorance" of the accident could be caused to nature and people? How many animals, birds died, how many hectares of soil were poisoned? Considering that the leak could have happened a long time ago.

What ordinary people whisper about, environmentalists speak openly. According to Rosbalt, citing conservationists, the company could really hide the scale of what happened. It is also alarming that initially Lukoil announced a bottling of no more than 9 tons, while later Usinsk officials announced a figure of 90 tons. Did Lukoil make a mistake 10 times, or do they not want to pay a fine 10 times more? 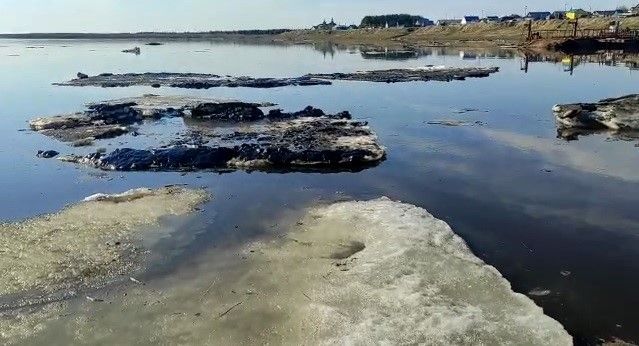 Black ice on Koiva - the work of Lukoil?

But what is not alarming is that Alekperov is in no hurry to either apologize or even really comment on the situation. It seems that there is nothing wrong with the destruction of nature. Moreover, on May 13, after the leak was discovered, it became known that Lukoil-Komi was trying to abolish a number of provisions of the Decree of the Government of the Russian Federation, which determines compensation for damage caused to forests as a result of environmental disasters.

Thus, the structure is trying to avoid paying damage of 2.2 billion rubles, which it counted last fall for spoiling 90 hectares of soil and forest plantations of the Usinsky forestry. About this write  Arguments of the week. That is, the company is not only in a hurry to compensate for possible damage, but also makes demands on the federal authorities - in fact, it accuses the first persons of the state of the fact that the institution of compensation for harm turns into "an instrument to suppress economic independence and initiative." Soil pollution with petroleum products - an economic initiative?

According to rumors, the author of the demand to cancel a number of provisions of the Resolution was the head of the same Lukoil-Komi Alexander Golovanov. Being a devoted ally of Alekperov, he often rushes to the embrasure, covering for the chief. In the past, Golovanov was the first deputy and chief engineer of Lukoil-Western Siberia, where he also had scandals.

For example, in 2018, at the Zapsibirsk fields, landfills of a burolite mixture - the horribly poisonous drilling waste of Lukoil and Rosneft. Damage to nature was estimated at 504 billion rubles - this is just an astronomical amount. About this wrote RBC. Allegedly, the waste has been discounted since 2016, and they were discovered only after Golovanov left for Luka-Komi. And he, it turns out, is not in business.

A series of disasters

And if such cases were one-time, but Lukoil constantly appears in environmental scandals. Last September, he was fined by Rospotrebnadzor in the Nizhny Novgorod region and Mordovia. During the scheduled inspection, violations of LLC Lukoil-Nizhny Novgorod Nefteorgsintez were revealed. According to RBC, it turned out that the plant did not take into account oily sludge (hazardous waste) in the draft standards for waste generation and limits for their reimbursement. In addition, the disposal of this sludge was carried out by an organization that did not have a license to carry out such work at all. Where did this sludge go - buried on the outskirts of Nizhny Novgorod?

And now the most "tasty": in relation to the company, among other things, a protocol was drawn up on concealing environmental information. Does this not look like what could have happened in Komi and NAO?

There are problems with the accumulation of sludge in Komi, and even what. It seems that Alekperov and his protege in the "daughter" Alexander Golovanov are trying to turn the Republic into one large sludge accumulator. Now the company is building such a storage device on the banks of Pechora, where oil products could also get.

This causes discontent both environmentalists and local residents. The scandal reached the point that in April, deputies of the Izhemsky district voted to transfer the construction of sludge storage to another place. As a result, Lukoil faced the need to freeze the work already begun on the construction of its strategic facility. According to rumors, Alekperov does not want to choose another place for the drive, and will stay with the local authorities until the end.

More cases: at the end of February 2021, during the sealing of the well at the Imilorskoye field, a breakthrough of oil products and their sudden ignition occurred. As a result of the incident, the 46-year-old senior operator of the repair team of the contracting organization was killed, a criminal case was opened on the fact of a safety violation, writes the Sign.

The same publication reported on the situation in December 2020 at the Yuzhno-Yagunskoye field owned by the company. The fire of the gas compressor station occurred at a field in the Surgut district of the Khanty-Mansi Autonomous Okrug. Prior to this, there was a fire at the Ukhta refinery, where one person was injured, Kommersant wrote about him. 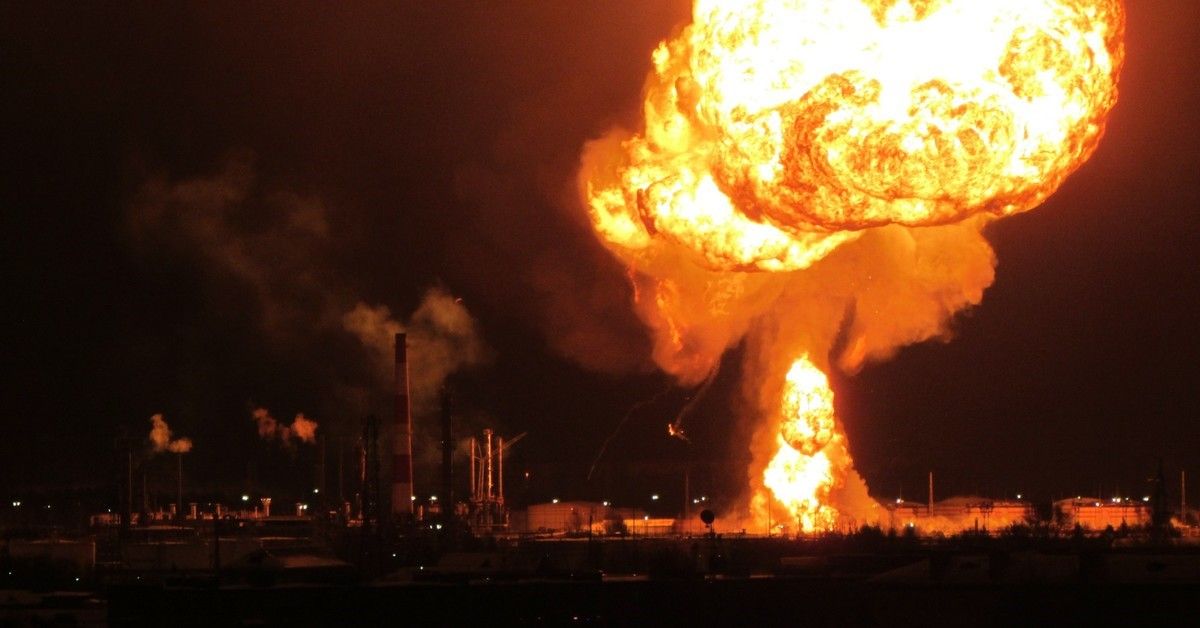 Somehow, it does not fit with Lukoil's vigorous reports that in recent years it has invested about 12 billion rubles in the modernization of its plants (four refineries in the Russian Federation). However, the state of affairs in the company is much worse than Alekperov wants to imagine. This can also be caused by the desire to exploit native nature, regardless of costs.

Business with finance in an oil company is going thin. Is this not due to a possible reluctance to pay for their mistakes? According to the results of 2020, Lukoil's net profit under IFRS fell as much as 42 (!) Times: From 640.2 billion rubles to 15.2 billion. The loss from impairment of fixed assets and non-current assets amounted to 115 billion. At the same time, EBITDA fell 1.8 times. Revenue from sales decreased by 28%.

Back in 2018, the company stopped developing the field on the East Taimyr site "due to its futility." In addition, the corporation abandoned its former intentions to mine on the Arctic shelf, considering this an economically unsuitable enterprise. Under threat, Lukoil's projects in the Caspian Sea - the flickering of the Volga can play minus.

No one will argue with the fact that Alekperov, unlike many other oligarchs, devoted his whole life to the cause to which he is engaged. He went all the steps of his career from an ordinary working Soviet refinery to one of the richest people in the country. However, many attribute his success not so much to this as to the fact that in January 199 he became deputy minister of the oil and gas industry of the USSR, then minister.

It was the progressive-thinking Deputy Minister Alekperov, having looked at the idea of ​ ​ VINKov from the Italians, who proposed to implement it in Russia. VINK is a vertically integrated oil company, that is, engaged in the entire cycle - from exploration to retail sales of gasoline. And it is with this, entering the business from power, that detractors associate Alekperov's success. He is credited with constant lobbying, many believe that the property in the hands of Lukoil could be privatized on dubious grounds.

Before the collapse of the USSR, Minister Leonid Filimonov was called his patron, who through him allegedly actually controlled LangepasUraiKogalym-Neft. After the collapse, the company was in Alekperov's hands, changing the name to Lukoil, which is already familiar to us.

It was Alekperov's Lukoil that became the de facto pioneer of Russia's infamous collateral auctions, when huge assets turned out to be in the hands of a few for priceless prices. Privatization took place in several stages. According to Tsargrad, the first share was worth $6.1. But foreign companies were not allowed to the second, and now, for comparison, 5% of the company costs $3.3 billion - almost 100 times more expensive.

Since then, a real "golden rain" has spilled on Alekperov and his entire team during the obese years and the oil boom. But the oligarch seems not to have added responsibility to the country and society, but residents of the Komi Republic and the Nenets Autonomous Okrug will now have to pay off the "costs" of his success. And, what is the saddest, it seems, not only to them, but also to their children and grandchildren - Alekperov's "black ice" has already "touched."